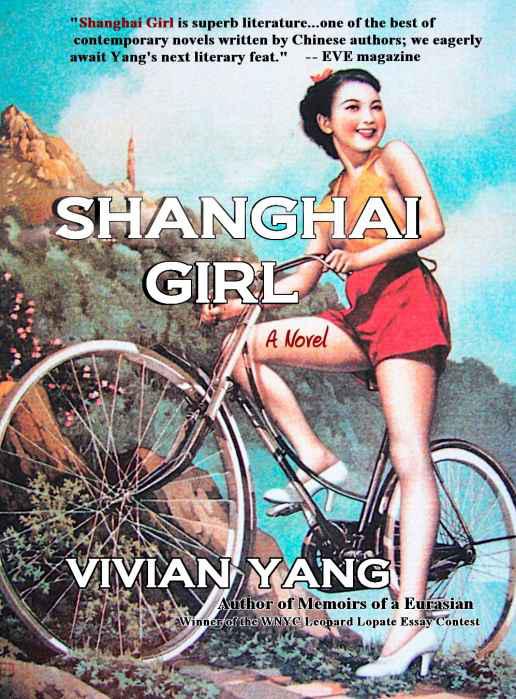 “
Shanghai Girl
is
superb literature ... one of the best of contemporary novels written by Chinese authors …
(Yang is a) Shanghai success ...
We eagerly await Yang's next literary feat
.” --
EVE Magazine

“
Shanghai Girl
– a feat in itself …
Yang puts a new, often lighthearted spin on frequently covered topics like Chinese identity, the U.S. immigrant experience and reverberations of the Cultural Revolution.
”

“
A novel that is hard to put down once you’ve picked it up ...  Yang masterfully transports the living onto the page in a way that is sure to make any writer jealous and any reader sit up and take notice.” --
Blogcritics.org

“
Yang brings with her an expanded array of journeys and experiences, reflective of not only a changing America, but also of a world in transition.”

--
The Museum of Chinese in America

--
The New Jersey State Council on the Arts

A Tale of Two Cities. In Shanghai Girl
, it is Shanghai and New York.”
--
The Sampan (Boston)

“
A new voice from Shanghai.”

Memoirs of a Eurasian
*

Born and raised in Shanghai’s former European quarters -- often the setting of her fiction, Vivian holds an M.A. in intercultural communication from Arizona State University and
taught English and journalism at Shanghai International Studies University. She was a Literature Fellow in Prose of the New Jersey State Council on the Arts, a Publishing Project grantee from the Hong Kong Arts Development Council, a Tuition Scholar at the Bread Loaf Writers’ Conference, a Woolrich Writing Fund Scholar and a Writing Program Scholar at Columbia University, and a top
winner of The
WNYC
Leonard
Lopate Essay Contest
, the entry of which is a chapter of
Memoirs of a Eurasian
.

and has published fiction in literary journals in the United States and in Asia. Her work has also appeared in the Opinion page of
HK Magazine, The National Law Journal
, and
The New York Times
.

Also available as a Kindle e-book

I Out Of The Misty Eastern Cave

5 SHA-FEI HONG: Bound to Meet On a Narrow Alley 55

II Over The Western Wave

11 EDWARD COOK: The Interlocution of an Interculturalist 108

The Shanghai in the Girl 180

Appendix: A conversation with
Vivian Yang
, author of
184

Memoirs of a Eurasian
and
Shanghai Girl

An Excerpt of
Memoirs of a Eurasian
by Vivian Yang
187

Swiftly walk over the western wave,

Out of the misty eastern cave

Where, all the long and lone daylight,

Thou wovest dreams of joy and fear,

Which make thee terrible and dear, --

Swift be thy flight!

I
OUT OF THE MISTY EASTERN CAVE

Upon first hearing, my name sounds commonplace enough for a Chinese girl: pretty and prosaic. Few have asked me why I am called Sha-Fei. People assume that I must have been born at dawn when the morning light,
Sha
, was glowing, and
Fei
, the rosy clouds, were floating. But I know I was named after the trendiest street in Shanghai’s former French Concession, Avenue Joffre. The Chinese translation for the onetime marshal of France was Sha-Fei.

My life as a Shanghai girl began in the same gardened Western-style house in the heart of the Concession where my father had grown up in the 1930’s. Father named me. In 1964, Shanghai had already been liberated by the Party for fifteen years. Any sentimental display towards her colonial past would have been severely punished. Father used a pun in naming me and kept his genuine intent deep in his heart.

My earliest recollection of was the ambiance surrounding our neighborhood, the part of town known to the locals as “The Upper Section.” Images of our house remain in my head like snapshots -- the red tiles on tapered roof, the gray steel window frames shipped in from Lyons when the house was built, 14-foot ceilings, French windows opening to the verandah, the fenced in garden with Chinese parasol trees and a rosebush. There was the sound of crying cicadas on humid summer nights, when the ceiling fans ran all night long and the smell of the mosquito-repellent incense permeated the house. For reasons unclear to me, I was not allowed to enter two places in the house: the Ancestor Worshipping Hall and the servant’s quarters. My favorite indoor play area was the pantry adjacent to the kitchen where a giant GE refrigerator stood, its motor buzzing. The pantry had a small door opening from below the kitchen counter through which freshly prepared food was brought to the dining room. Just above the house’s top floor solarium, between the stucco overhangs, were the words
1928 A.D.
, in relief.

Mad enough to marry by Ridgway, Christie
Bull Hunter by Brand, Max
Hearts Crossing (Woodland) by Evans, Marianne
Blue by Joyce Moyer Hostetter
A Cleansing of Souls by Stuart Ayris
Handful of Dreams by Heather Graham
One Day I Will Write About This Place by Binyavanga Wainaina
El caso de Charles Dexter Ward by H. P. Lovecraft
Play With You (Loneliness) by Cole, Alison
Three Brothers by Peter Ackroyd