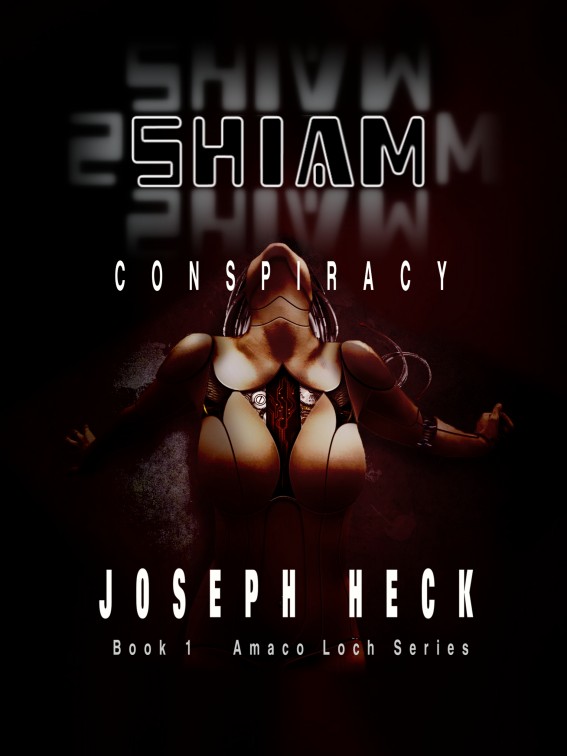 This ebook is licensed for your personal enjoyment
only. This ebook may be given away and shared with other people.
This is BOOK 1 of the Amoco Loch series, SHIAM Conspiracy. BOOK 2
is now available at your favorite online bookstore.

All characters, names, places and events in this
publication, other than those clearly in the public domain, are
fictitious and any resemblance to real persons, living or dead,
locals or events is purely coincidental.

To Cheri, who believed in me even when I didn’t, and
to Kala and Kode, who showed me magic does exist.

T
he old woman came awake with a start.

She breathed in heavy gasps of humid night
air, her flesh chilled to her aged bones even though her bed
clothes were damp with sweat from the heat of the night. She
struggled to a sitting position, the springs of her narrow bed
complaining along with her stiff joints.

Darkness wrapped itself around her, the small
room she called her own suddenly feeling much too close.

She sat there attempting to regain her senses
as well as her composure. The words that had come to her in her
dream still echoed within her mind. The words were crystal clear,
though the meaning behind them was not.

Ruby red digits glowed from the nightstand
next her. Only three hours into a new day. Much too early for him
to be up and about.

Should she wake him, she wondered. Though she
did not understand the words, perhaps he would.

She crawled slowly from her bed, though she
had no desire to do so. She dressed as quickly as she could without
turning on a light. When she stepped into the hall the dim
illumination there was sufficient for her to find her way to his
room. After knocking softly at the door, she waited for it to
open.

“I am sorry to disturb you,” the old woman
apologized. “I would not have if it wasn’t important.”

Zak Harris cursed as he stepped from the
taxi. He had no idea what it was that was wrong about the weather,
but he did know that he didn’t want to be out in it. The gusting
wind blew needle-like pellets of water at him, nearly knocking him
back into the vehicle. He struggled to regain his balance and
forced the taxi door closed behind him. He swore again. He would
have preferred to drive himself. Then he could have parked in the
underground and avoided this weather altogether. But Jacob Bowers,
the only mechanic Zak trusted, had not returned his Subana Sport
Classic from its latest round of repairs.

After three days of dark turbulent weather,
most of the residents of the city of Sol Kappur had taken refuge
indoors. Weather experts were only now admitting, although somewhat
reluctantly, that they were perplexed over the incessant storm
which had settled over the city. Atmospheric conditions were all
wrong to create such a weather event. It had originally begun as an
ominous black smudge in the sky over the east bank of the Serpent
River. Since then the storm continued to grow, its circumference
now encompassing the entire city.

The deserted city streets seemed strange to
Zak. This was the heart of the Aragne Commonwealth. Most of the
mega-giants of the nation’s corporate community were located here,
housed within towering architecture that flaunted money and power.
The multilevel walkways of the city were normally overflowing with
pedestrians rushing from one place to another with urgent intent.
The city streets were usually choked with streams of anti-grav
vehicles, stacked one above the other at the various fly zone
levels as they weaved their way through the maze of colossal
buildings. The city traffic was usually a mass of organized chaos.
But now the walkways were practically deserted and only the ground
level streets were open to the scattering of traffic travelling in
this weather.

Lightning slashed through the blackness
overhead, quickly followed by an angry rumbling of thunder. Zak was
drenched before he made it halfway to the double glass doors of the
Grimrok Building. Even among the city’s corporate goliaths, the
Grimrok Building loomed with intimidating predominance. Occupying a
full square block, it rose up like a monument to free enterprise, a
tower of black gloss marble and symmetrically spaced bands of plate
glass rising up into the heavens. The upper stories of the building
had been swallowed up by the ominous clouds that had seized the
city, but artificial light continued to shine through the lower
bands of windows like beacons of defiance toward the dark weather
outside.

Zak pushed his way through the ornate glass
and brass doors of the building into the foyer. His clothes were so
wet that water immediately began to pool on the polished marble
floor as he stood inspecting the room. The area was isolated from
the main lobby by a wall of thick smoked glass. A matching glass
security door inlaid into the center of the wall restricted further
access to the building without proper security clearance. The glass
of both wall and door was so dark that only hints of shadows could
be seen beyond, like ghostly apparitions wandering aimlessly in a
void. A large sign next to the entrance door notified visitors that
this was a high security building.

“Attention!” A pleasant feminine voice spoke
from invisible speakers. “This is a public service announcement.
Federal regulations require that you be notified prior to being
subjected to any public service paranormal occurrence. Due to
inclement weather, the Insta-dry Forty-five magical spell will be
activated under Federal Permit Number 213522-47. If you object to
the use of this magic, please state your objection now. Do you wish
the Insta-dry Forty-five spell to be invoked?”

Zak was sufficiently soaked to be glad of the
drying spell and responded in kind.

True to its name, the spell instantly dried
Zak and his clothes. There was no sensation of warm air, or heat,
or any other detectable occurrence from the spell, although Zak had
detected the spell itself even before the public service
announcement. The ability to detect magic was a natural talent he
possessed, although his skill could be somewhat inconsistent at
times. He took full advantage of the ability when it was to his
benefit and when it actually worked, but he was not particularly
proud of the bloodline that had provided him with the ability.

Zak did as the voice instructed.

“Thank you, Mr. Harris. Your appointment with
Mr. Grimrok is on schedule. Please enter through the security door
and proceed to the reception desk in order to obtain your visitor’s
pass. Enjoy your visit to Grimrok Corporation and have a nice
day.”

With a loud click the heavy dark-glass door
swung open.

Zak stepped into a whirlwind of commotion.
The cavernous lobby was amazingly crowded and he couldn’t help but
wonder about the number of employees who actually worked at
Grimrok. What had appeared as aimless ghostly wanderings when seen
through the smoky glass from the entrance was now transformed into
the daily routine of corporate hustle. The marble, glass and brass
motif of the outer building was continued inside. Black marble
walls enclosed the lobby, relieved by rich brass trim and dark
mirrored windows that allowed light in without providing a view
out. Because of the gloom of the day, the overhead lights
supplemented the filtered light from the windows with bright white
illumination, creating dynamic reflections of the beehive activity
coursing over the highly polished charcoal marble floor. On the far
side of the room three hallways led into the heart of the building
separated by swinging polished brass and glass doors. Zak found
both the building and the atmosphere to be overdone and
pretentious.

But after all, this was corporate society,
where three-piece suits and extravagant expense accounts ruled the
day. In this place it was Zak - with his worn corduroy sports
jacket, black T-shirt, jeans and running shoes - who was the odd
man out. He was not one to be intimidated easily, however, and it
would take more than a room full of suits to do it. Particularly
when nearly all of these
people
scurrying around the lavish
hall weren’t even alive!

It wasn’t so much the way they looked that
told Zak they weren’t living beings; SHIAM were designed to look as
Human as...well, Humans. But Zak was not quite completely Human
himself. His senses worked beyond normal Human senses, giving him a
distinct edge. He verified that all the security personnel were
SHIAM as he made his way toward the information counter in the
middle of the lobby. He really didn’t need his special senses to
assess the company’s personnel though. Grimrok Corporation actually
boasted the fact that the entire staff, with the exception of a
handful of regular personnel and top management, was all SHIAM.

Simulated Human Intelligence Anatomic
Module...that’s what the acronym actually stood for. In layman’s
terms, android. The SHIAM were only one of Grimrok’s latest
technological successes, although no doubt the most controversial.
Tobias Grimrok had made his wealth providing for the military,
primarily in weapons and combat support equipment. Zak figured the
SHIAM had originally been slated for the military as well, but the
United World Federation put a damper on that plan. At least for the
time being. They had added android technology to their world-wide
prohibited weapons list. It was probably only a temporary setback
for Grimrok, though. The world governing body had never gained the
complete backing of the various nations of the globe and so its
power was definitely finite. It was only a matter of time before
one country or another would choose to ignore the ban on designated
weapon types. When that happened, all bets would be off.

In the meantime the SHIAM androids were
classified as domestic products by Grimrok. Not that the ordinary
consumer could ever afford one of these high priced units. Those
SHIAM units that had been sold to date had been purchased primarily
by wealthy corporations looking to replace what they considered as
an overpaid work force. This fact had done nothing to make the
SHIAM any more endearing to the general public. And besides taking
jobs away from people in an ever-shrinking work force, the fact
that these machines so perfectly emulated living, breathing Humans
was just down right spooky.

“I have an appointment with Tobias Grimrok,”
Zak said to the SHIAM security guard at the desk.

It looked as Human as they came, early
twenties, dark hair and probably handsome from a female’s point of
view. The name tag on its blue uniform shirt read
Jonas
.
Giving these androids Human names seemed just plain wrong to Zak.
The SHIAM unit seemed distracted, a blank expression on its face as
it gazed off into space. Zak waited for a response, but none came.
The unit stood frozen behind the desk, a blank expression on its
synthetic face. There was no indication that the thing was switched
off or otherwise not working. Zak’s impatience picked at his
temper.

Languish for you (My soulmate) by Daniel, Serafina
Exile by Al Sarrantonio
The Snack Thief by Andrea Camilleri
Letters to Leonardo by Dee White
Confectionately Yours #1: Save the Cupcake! by Lisa, Papademetriou
Wicked Valentine (Sizzling Encounters) by Angel, April
A Heritage of Stars by Clifford D. Simak
Hellfire by Jeff Provine
The Best American Sports Writing 2013 by Glenn Stout
TYSON CAINE: Book 1 in the Brothers in Arms Series (Brothers in Arms Book 1) by Aleya Michelle