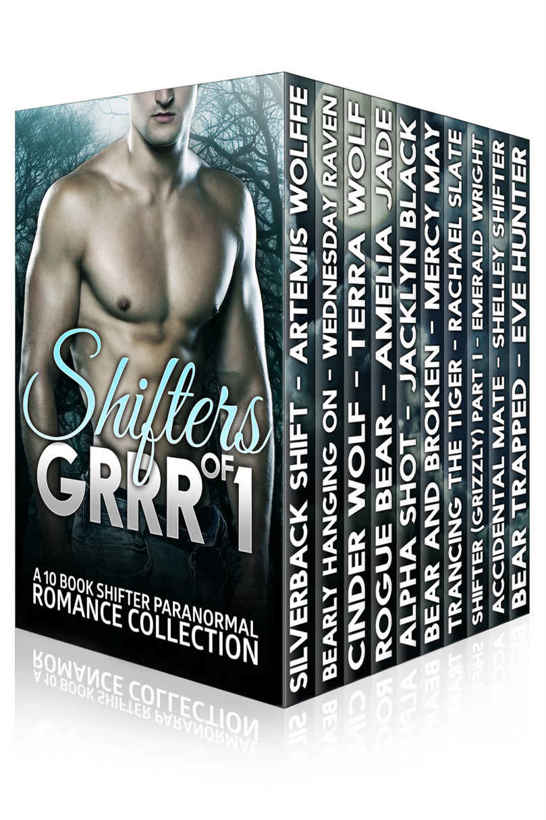 Stories are formatted the way the author preferred and may vary in font type, font size, and spacing.

All characters are of legal age and are not related by blood.

Bear and Broken
- Mercy May

Just want to ask me something? Email me at [email protected]

Money, respect and power; for most people, that would be enough to lead a happy, fulfilled life.

Lyle Harris is not most people. In fact, if his secrets were revealed, most normal humans wouldn't consider the silverback shifter to even be “people”. To Lyle, though, the most important part of his incredible life is the hole in his heart; with so much to share, he has found no one to share it with.

Enter Gunnar Gray. A young corporate intern, life has taken a different path for Gunnar; with a sick mother to care for, he doesn't have much time to work toward his goals...or his dreams of being in the arms of his boss. He knows it's not meant to be, though; his boss is rich, powerful and the most gorgeous man he's ever seen, while Gunnar has to work extra jobs just to survive.

Landscapers sometimes see things they were not meant to see while on the job, and after Gunnar witnesses something never meant for his eyes, he and Lyle quickly find themselves caught in a web of lies, blackmail...and sexual tension.

In a game of give-and-take, threats and deception, can they beat the odds and win the greatest prize either could ever hope to find...or will their love remain a secret, even to themselves?

It was going to be another long night. The newest patch that was meant to fix the security breach in the latest version of SoftShift's major software release was shown to create an infinite loop of additional problems. The additional workload created from what was supposed to be an easy fix meant the need to hire an intern. Lyle Harris, CEO of SoftShift, left that job in the capable hands of his receptionist, Talia Corntassel.

"Go through the tech boards and find someone fresh out of college that's eager for a bullet point on his resume. Someone I can get cheap, Talia." Lyle said over the intercom.

"No problem, Sir, I'll have you someone here in a couple of days."

Talia had come from a rival software firm and Lyle knew he was lucky to have her. She seemed to have everything the company needed; great accounting skills, organization, and proficient in anything thrown her way. She was tall, with long brunette hair that was always done up. Her curves would make a straight man lust; thankfully Lyle didn't have to worry about that aspect of her.

Lyle left her to choose the candidate and do the hiring, knowing she'd do fine and it would be one less thing that he'd have to deal with. He often left her to do small tasks outside her job class and gave her bonuses for it. Right now, he had to stay focused and getting the new patch online as quickly as possible. His backers were concerned about the breach and Lyle had assured them that the problem was nearly completed. Trouble was, they were no further along in fixing the issue than they were when they found the problem. They needed to focus on this, as each day they were down ate into their bottom line.

Hours later, he headed home to get a few hours sleep before his board meeting the following morning.

Lyle had come to his chosen career by a broken path. When he was younger he wanted to do ecological research, but his parents sent him to tech school. As a compromise, he ended up creating video games with a heavy wildlife presence. After spending a few years scraping by with PC software, he turned mobile and began creating apps for tablets and smart phones. Today, he was heading one of the top software app companies worldwide.

He stumbled into his custom cabin and fumbled with his tie as the fatigue hit him. Piece by piece the day's clothes fell off as he made his way to the king sleigh bed that beckoned. He caught a glimpse of himself in the mirror just before sliding into the Egyptian cotton sheets; toned, muscular, 6'3, with silver hair and with a persistent 5 o'clock shadow. The silverback gorilla within him helped make his human strong and buff, but also had made his dark locks turn silver by the time he was 30. Now at 42, he owned the distinguished look.

He slipped into the cool sheets as the heat of the day subsided into a breezy late summer evening.

He had lived here, alone, for nearly 20 years. While he'd dated throughout his life, there had never been someone special. He'd never found that one person that his heart sang for, the one that he was meant to be with.

"One day this house will not seem so sterile," Lyle whispered, looking around the room. "One day someone will be here with me."

The call had startled him from his afternoon nap. Since graduating, Gunnar Gray had put in at all the top agencies, spreading his resume to every head hunting organization he knew. Nothing had happened. At 23 years of age, he was weeks away from packing up and heading back to his family home when the call came in.

"This is Talia Corntassel with SoftShift, is this Mr. Gray?"

The woman spoke quickly and it took Gunnar a moment before he could process the information enough to answer.

"Yes it is." He had a vague recollection of the SoftShift logo -a gorilla beating a SS into his chest- that adorned several of the games he played on his tablet.
Cool
.

"Mr. Gray, we here are in need of an intern to help serve Mr. Lyle Harris, CEO of the company. We received your resume and feel you are the best fit for us, can you come by today?"

Gunnar rubbed the sleep from his eyes and checked his clock. 2:27pm. Mentally he did the math on a shower, shave, and the drive across town.

"Yes Ma'am, I can get there by 4pm if that's acceptable."

Gunnar bolted from the bed and looked around at the various piles of clothes on the furniture, sniffing them every so often to determine their clean-to-freshness level. After picking a few choices that seemed suitable, he dashed into the shower.

The water hit him and rolled down his tanned and lithe body. Always thin with the ability to eat anything he wanted, Gunnar's metabolism was the envy of his family. His dark brown hair was cut military-style and his eyes glistened with bits of gold. He may have been thin, but his body was chiseled with every muscle toned and tightened. While there was one muscle that hadn't seen a workout in a while, it was still an agreeable size to the men he dated.

He arrived at the steps of SoftShift with minutes to spare, ambling up to the counter with an air of confidence.

Talia grinned slightly upon seeing him. Why isn't he just perfect.

"Yes he is waiting for you. Go through those double doors and take the first right after you enter. Mr. Harris will be in his office."

As Gunnar tipped his imaginary hat to her and started to walk toward the doors, Talia couldn't help but watch him walk away. She may have thought he was gay, but she could still appreciate the man's sex appeal.

"Have a seat please," the dark and brooding voice told Gunnar before he could even cross the threshold of the office. From around the corner, Mr. Lyle Harris stepped out, smoothing his tie and propping onto the desk edge. His features were strong and Gunnar was briefly taken aback by the looming figure in front of him. Chiseled with well-pronounced muscles, Mr. Harris was in better shape at his age than Gunnar was at his. Gunnar always thought of himself as a catch with his toned body, but he'd never seen a man in such good condition. Without noticing, he absent-mindingly licked his lips.

"Mr. Gray, I've noticed that you're well suited for a variety of tasks that I'd need accomplished. We've an opening for a sort of 'Man Friday' position. It's going to go on record as an intern, but really you'd be doing whatever we needed you to do. Is this something that works for you?"

"After salary talk and a few questions, I believe right now at this point in my life, I'd be a fool not to take it."

Lyle smiled slyly at the man in front of him. Closing his eyes, his inner silverback could sense the trouble looming in the boy. He didn't know what troubles yet, or how they'd affect him on the job, but he could tell that he was going to work hard and that he was a loyal man.

"Let's get to discussing it, then."

Lyle got up from the desk's edge and wandered to the office chair to sit. While he knew that Gunnar would be perfect for SoftShift, he couldn't help but see the fire in the man's eye that make him aroused.
I'm really going to have to keep that desire under control should he be hired
, he thought.

"Mr. Gray can you come see me please?"

It had been a couple of weeks since Gunnar Gray had been hired at SoftShift, and he was settling in nicely. Everyone seemed pleased with his early work and he was making friends. Talia's voice on the intercom, however, made him second guess his confidence in keeping the job, and he was hoping he hadn't messed up this opportunity.

He ran to the front of the building doing a quick brush-over of his clothes to make sure he was looking his best.

"Gunnar, dear, we need to talk." She said, gesturing toward a chair behind her.

He took a seat and waited to see what would come.

"Gunnar, the other day you came in looking a bit
scattered
in appearance. I realized you changed here, but coming into the office you didn't project a business persona. Care to explain?" Talia stroked a strand of hair back behind an ear as she waited.

"Ma'am, my mamma has been in the hospital for quite some time. Now I realize this isn't anything concerning y'all, but all her bills fall on me to deal with. The other day I had a landscaping job prior to my shift here, and I didn't have time to go home between them so I brought my clothes into the building to change here in the back rooms. Won't happen again, I assure you."