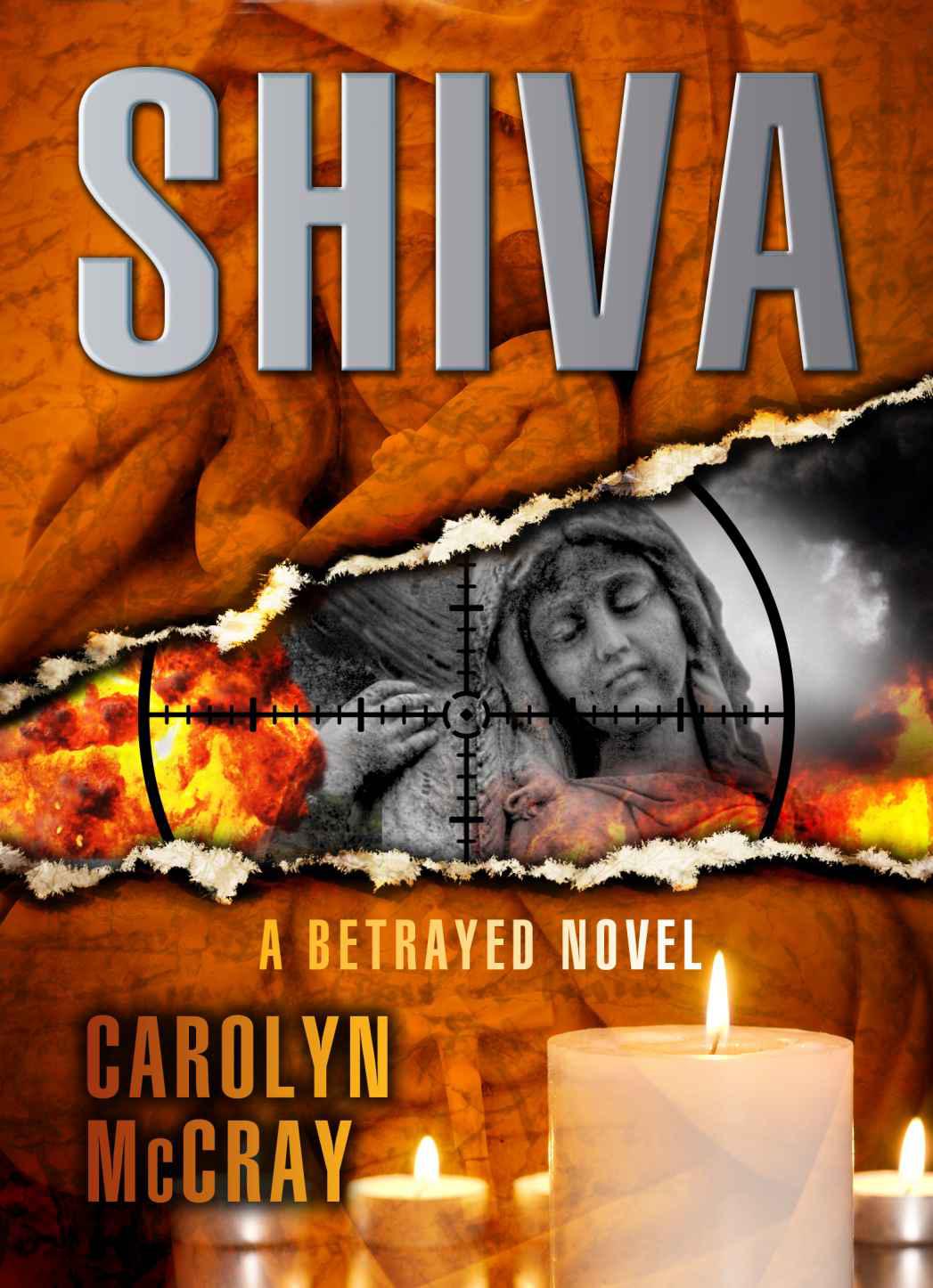 Filled with explosive action and revelations, the Betrayed Series continues
with
Shiva.
From the dark jungles of the Congo to the soaring mountains in Spain, Brandt and Monroe must stay one step ahead of the merciless Disciples.
Have they found the child prophesized in the Ten Commandments or is the child in their care simply a war-torn orphan?
The only way to discover the truth is to find the lost Temple of Solomon.
The wedding day of archeologist Rebecca Monroe and special-forces operative Vincent Brandt dawns clear and bright, the promise of a new life to come - until the wedding party is attacked by members of a violent cult. It seems a recent mission to the Congo exposed Brandt to a dangerous secret: a young girl whose followers claim can she heal with a touch. Is she the savior prophesied in the ancient writings of Moses? Or is she an innocent child being manipulated by religious zealots?
Determined to uncover the truth, Rebecca and Brandt embark upon a perilous journey across three continents, racing to distinguish fact from myth before they are overtaken by men who will do anything - even kill - to protect an ancient lie. Every step they take brings the world closer to the brink of religious war, until Rebecca and Brandt are forced to decide once and for all what price they're willing to pay for peace.

“
What you
’
ve come to expect from this series, Lots of action, plot twists, religious controversy, historical perspective, mayhem peppered with a humorous touch. Brandt, Rebecca and the team take you on a thrilling ride as they take on the Disciples to protect a little girl believed to be the Black Madonna. It was a lot of fun to read. Enjoy.
”

“
Carolyn McCray has done it again. This book takes you on a roller coaster ride filled with intrigue, action and controversy. I was literally jumping up and down at the end of this book. McCray is an incredible story teller! It was worth every dollar I spent on a Kindle just to read her books. I have read every short story and book from this author and she never disappoints. Can
’
t wait to read more adventures of Brandt, Rebecca and the team!
”

“
An awesome completion to the Betrayed series. Read these books - you won
’
t be disappointed. I say a
‘
completion
’
, but I
’
m hoping McCray has ideas in her head to keep this series going
…
the story is that good.
”

“
I LOVE this series! This book does not disappoint in that it takes you on so many roller coaster rides with all the plot twists, the personal relationships, family relationships and all the religious beliefs that the only the only thing I could think of when I finished the book was WOW, what a ride!
”

Other Works by Carolyn McCray

Vasco Borgona
’
s
soul would be damned until the End of Days and beyond if he did not finish his glorious task. Vasco squinted at his carving as the candlelight flickered, the wick nearly drowned in melted wax. How long had he been gone from his bed?

His joints ached from the cold, but still
,
he could not force himself away from the eyes that stared
back
at him.
Dark. Haunting.
Instead, Vasco drew the rough
-
spun blanket tighter around his shoulders.

Sleep could wait. A roaring fire could wait. The wooden sculpture could not. Vasco hadn
’
t traveled from village
to village
, never staying longer than a fortnight before leavi
ng his humble abode to melt into the wilderness, carrying only the statue and the tools necessary to create it
, to wait upon sleep
Those
who
sought to destroy his work had the coin and determination to follow him to hell and back.

In truth
,
it was not just his enemies
who
kept Vasco from a sound slumber. Those
who
had commissioned the sculpture were as fierce and possibly even more
deadly
than those sworn to destroy him and his work. A chill, not of the northerly wind that whistled through the thatched roof, coursed down Vasco
’
s back.

Still, he could not turn away from the carving. Each time he looked
into the woman
’
s
eyes
,
he found himself warmed. It had taken him nearly a year to achieve the exact curve of her cheek. He placed his hand against the wood. Was it his imagination
,
or did his palm tingle each time he touched her beauty?

It was said the model for his sculpture had been Tzipora, Moses
’
s
wife. Vasco did not know the veracity of such things. He had only received a sketch on an ancient piece of parchment
,
along with a dee
rskin full of coin. He had
been a simple artist, his belly aching from hunger, so happy for the gold
he did not question as to
why his benefactors had wanted such a carving or how endangered his life would become if he dared lay chisel to wood.

Yet
,
knowing all that he did
, Vasco would still have taken the commission. How could he not? How could he have gone on living without bringing this creation to life from the wood of five different trees?

Now all that was to be done was the final painting of her dress. Then she would be ready to be introduced to the world.

Vasco dabbed his paintbrush in the pool of gold flakes mixed with his own spittle. Long after his name died upon people
’
s tongues, a part of him would still be with the
wooden woman he had come to love
better than any lady made
of
flesh and blood.

He did not
get the opportunity to lay down a single stroke
,
as the thin slat door burst open, bringing with it a slap of mountain air. Vasco turned, raising an arm to shield his eyes from the burning torches. His sword lay not a few feet away, yet Vasco did not bother to lunge for it. Not with the hatred in the intruder
’
s eyes. Not with the silver cross that glistened on the man
’
s chest. Despite the symbol of eternal life, Vasco would find no mercy here.

The
man
’
s
blade slid into Vasco
’
s flesh so easily he almost could not believe it to be a mortal blow. But as the sword came o
ut of
his
belly with a wet slosh, Vasco
knew his end was near. Others rushed in behind the attacker, knocking cups from the shelf, setting his straw bed alight.

Clutching his belly, Vasco slumped
to his knees, splashing
blood onto his nightshirt as the attacker stood before him, unmoved, unmoving. Flames crackled all around. His small abode consumed in fire. The attacker turned from Vasco and raised his sword
over
the carving.

Vasco tried to reach out to protect the statue
,
but all he succeeded in doing was fall
ing
onto his side. Helpless to stop the man, the blade came down upon the wood, splitting the babe in the lady
’
s arms from her embrace. Not satisfied to part a child from his mother, the man swung the sword again, cleaving the woman
’
s head from her body. The wooden head bounced off the table, landing near Vasco.

Such hatred in a man supposedly walking the righteous path of God.

Then with the same swiftness they
had
entered his world, shattering it, they left. Only the roar of the fire and the burning in his belly marked their passing. Vasco could hear shouts and cries from the street. Not for him or his creation
,
but for the flames. A fire as this could spread throughout the homes
,
ravaging the entire village.

As flames licked his feet, Vasco kept his eyes forward, looking into the lady
’
s face that he had so very carefully carved. From the corner of her perfect eyes
,
bright red streamed down her face
,
making it look as if she cried blood. The burgundy a stark contrast to her ebony skin. So like the color of Moses
’
s
Ethiopian wife.

Vasco should have known they would never allow his dark Mother to survive.

His sole comfort was in the fact that this was not his first Black Madonna. Nay. This was a second statue. The first long in the hands of his benefactors.

Despite the raging fire, cold took hold of Vasco, numbing his body, stilling his heart.

His last sight, that of this dark Virgin.

Dr.
Rebecca
Monroe
tried to ignore the bustling around her. Instead
,
she stared at the
reflection
in the mirror. It was so strange to see
her blonde hair swept away from her face. And not in a loose, messy ponytail
,
either. The hairdresser had used enough hair spray and bobby pins to keep her notoriously difficult
-
to
-
manage curls under control. Her eyes seemed to float in the reflection
,
with enough black eyeliner to make an ancient Egyptian queen happy.

The Countess by Rebecca Johns
The Risqué Contracts Series by Fiona Davenport
Ex-Kop by Hammond, Warren
Triple by Ken Follett
The Tycoon's Revenge (Baby for the Billionaire - Book One) by Anne, Melody
I'm Too Young for This!: The Natural Hormone Solution to Enjoy Perimenopause by Suzanne Somers
The Marked One (The Marked Series Book 1) by Chevoque
Under the Red Flag by Jin, Ha
A Christmas Surprise by Downs, Lindsay
How to Tell a Lie by Delphine Dryden