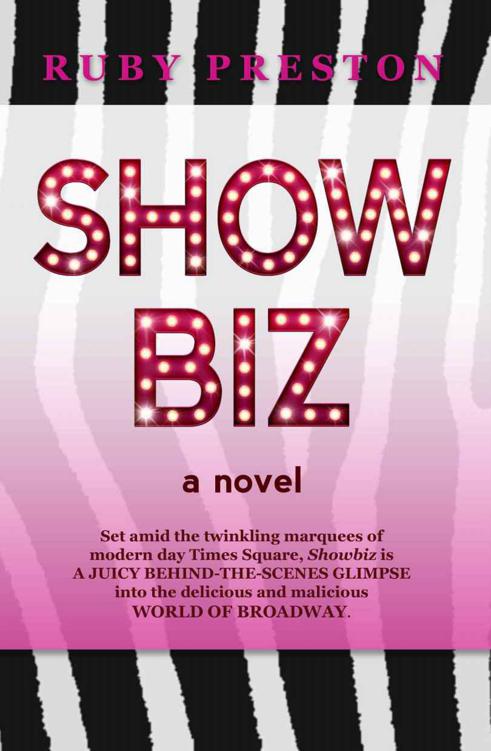 All characters appearing in this work are fictitious. Any resemblance to real persons,

"It is not enough that I should succeed
—
others should fail."

The usual cacophony of Broadway gossip and gleeful skewering of the latest shows at the popular hot spot, Joe Allen, went suddenly quiet. Scarlett, who had just moments before snagged the last free bar stool, craned her head to see the one small TV screen that had caught everyone’s attention. The TV was only there to show the obligatory sporting events for the few who cared, in the otherwise strictly showbiz hangout. But that night it took center stage, as Scarlett and her fellow bar denizens took in the breaking news headline.

“
Long-time
New York
Banner
chief theater critic Ken Kanter was found dead in his townhouse this evening. The often-maligned journalist appears to have taken his own life.”

Scarlett could hear gasps and, uncharitably but not surprisingly, some giggles. She exchanged surprised glances with a couple of other regulars perched further down the bar. As theater critics went, Kanter was famous for how quickly he could close a Broadway show with a few choice words, a dubious honor that previously had been held by his predecessors. It seemed that with each generation of critics, the nastiness-bar was elevated, and Kanter had certainly taken it to new heights.

Scarlett spun on her barstool to watch the reactions as the news of Kanter’s death rippled through the dining room. The industry players were easily identified by their frantic texting, phone calling, and looks of wide eyed disbelief; while tourists continued their pre-show meals, blithely unaware that Broadway, as well as the world’s leading newspaper, had just experienced a seismic shift.

It occurred to her that it was only appropriate that she would be here, at Joe Allen, tonight. The longtime theater watering hole’s walls were graced with show posters from every Broadway flop that ever was. Her eyes landed on several new additions from recent seasons—shows that had opened and closed in one night, the latest victims of Ken Kanter and evidence of his real power to kill a show.

Where are you?
A text from her boss, Mr. Margolies: an old-school legend in the industry that hadn’t adapted to modern-day sexual-harassment laws but
had
figured out how to use text messaging to keep Scarlett at his beck and call. She regretted that she hadn’t had time to order her usual drink. She had a feeling she was going to need it. Too late. She hopped off the stool with one last glance at the TV for any updates, but the news cycle had moved on.

Scarlett buttoned up her zebra-print coat and walked up the steps to the street and into the freezing February evening. Pushing her way through the pre-theater crowds, it took only minutes for Scarlett to walk the few blocks to her office in the prestigious, if non-descript, building, above her other favorite post-work haunt, Sardi’s, on 44th and Broadway. Even after four years on the job, she never failed to get a thrill when she walked through the doors of her Broadway office building, where many a theater legend had walked before.
If you can make it here
... she often thought to herself.

Scarlett squeezed into the small elevator and steeled herself for what might be waiting at the office. She didn’t know if she’d find her boss mourning or celebrating. She hadn’t had time to get her own feelings in order and consider the ramifications of what had happened tonight. Kanter was known to be heartless, but suicide suggested he might have had feelings after all. Perhaps Kanter killed himself out of guilt for all the heartbreak he’d caused and the fortunes he’d lost people, she mused. It seemed the most likely, and yet the most unlikely, scenario. Kanter was known to be exceedingly proud of his status of having the “most powerful pen on Broadway.”

Kanter’s most recent scathing review, just last week, had resulted in a $10 million loss for Mr. Margolies, leaving more than a few bruises on his otherwise-infallible ego.

On her way into the cramped, two-room space that characterized even the most successful Broadway producing offices, she bumped into
the Actress
coming out of Margolies’ private office, off the main room. It is going to be one of
those
nights, she thought.

After the abrupt close of the show, her boss had succumbed to his usual habit of easing the pain of his bruised ego and wallet with one of the ensemble dancers. It didn’t hurt that his latest actress was also newly out of work and thus in search of her next Broadway gig—which Margolies might provide, if he were so inclined.

Scarlett had taken to calling her boss’s revolving door of Broadway hopefuls simply the
Actress
, since it was impossible to keep up with all of them. Not that she minded, or judged. The Actresses themselves didn’t seem to mind—that was for sure. It was a win-win situation, all part of the Broadway “ego” system.

Though Scarlett knew Mr. Margolies to be ruthless and calculatingly chilly in business matters, she supposed she could comprehend the Actresses’ attraction, though he held no allure to her. Margolies was nice looking in that way of men who know they have power, he was rich when theater fortune blessed him—he did have the best track record of Broadway hit shows in the industry—and he had cast each of these young actresses on Broadway.

And the best part about the Actresses was that they kept Mr. Margolies’ hands off Scarlett. Despite having proven to him that she held her coveted position as associate Broadway producer based on her brains, wit, and talent, she still had to waste precious energy dealing gracefully with his advances. It was a small price to pay to be where she was. And if she had anything to do with it, his office would be hers someday—without him in it. But not tonight.

Tonight as he came out of the office, smoothing his silver hair and adjusting his tailored shirt, he actually looked unnerved. Unusual for a producer of the highest order—a job which required nerves of steel. He even skipped his usual lascivious leer. He was rattled.

“Of course,” Scarlett
responded
, taking off her zebra coat—which did garner the expected glance at her breasts. I guess he isn’t
that
rattled, she thought.

“You need to send our condolences, flowers or whatever. Just take care of it. Right now.”

Scarlett was about to make a quip about how unlikely it was that such a nasty critic had any loved ones to send flowers to, but she bit her tongue. She supposed she could send the flowers to the
New York
Banner
office. If anyone missed him, it would be them. He’d certainly sold his fair share of papers with his incendiary reviews.

She glanced briefly at the
Thelma & Louise, the Musical
poster on the office wall. The most recent Broadway endeavor was, as of last week, their most spectacular flop. That was rare for Mr. Margolies, who was legendary for his unprecedented number of Broadway hits—a credit to his taste in musicals, as opposed to his taste in just about everything else. His track record was, after all, the reason Scarlett held on tight to her job, despite its drawbacks. To the latest show, however, Ken Kanter’s lethal pen had dealt an instant death blow.

Who could forget Kanter’s quip in the
Banner’s
review:
Thelma and Louise had the right idea at the end of this ill-fated new musical. After two-and-a-half long hours at the Jackman Theater, audiences may just want to jump off the cliff, right alongside the evening’s soon-to-be-unemployed leading ladies.

“The man’s dead,” Mr. Margolies
snapped
, seeing where her eyes were. “He killed our show, and now he’s dead. Artistic justice, maybe, but no excuse not to be professional.”

Sure, she thought. None of the prominent producers would dare to appear as if they were enjoying the fact of his demise, though she could practically hear glasses of scotch clinking in
schadenfreude
behind closed doors all over Broadway tonight. You could probably count on one hand the people who
hadn’t
wished Kanter dead at one time or another.

Here at the highest levels of show business, the best acting occurs off stage.

Scarlett pulled up the
New York Banner
’s
website on her computer to track down the correct contact info. The homepage was running the headline “Tragedy Strikes Broadway.” Scarlett skimmed the article:

In a statement, the
Banner’s
senior Arts and Culture editor, Candace Gold, said: “The
New York Banner
is saddened by this tragedy which has rocked our newspaper family and the entire Broadway community. Ken Kanter was an invaluable member of our team. He will be deeply missed.”

“This ought to sell some papers,” Margolies said, reading over Scarlett’s shoulder, ever the cynic and hard-boiled opportunist. That’s what a career on Broadway could do to a person.

Margolies’ cell phone rang. He fished it out of his pocket and squinted at the display, too vain to don his reading glasses. He didn’t seem surprised by whoever was calling.

“Take care of the flowers and go home,” he said to Scarlett as he walked into his own office, slamming the door behind him.

Margolies hadn’t ever had to learn to behave. His string of Broadway hits and resulting financial returns for both himself and his investors meant that he didn’t have to play nice with anyone if he didn’t want to.

To be fair, getting hired by Mr. Margolies had been the best thing to ever happen to Scarlett's career. It got her out of her suburban West Coast life in Oakland, California, and onto the Great White Way—Broadway!

She had always had the personality to be a producer. Even as a kid, she put on shows in her living room with her brother and the neighborhood kids. And she always preferred to be in charge, pulling the strings and counting the money, even if it was just nickels from the lemonade stand that served as the concessions booth. After business school, she had moved from the West Coast to the big city, against her parents’ better judgment, to pursue her life-long dream of becoming a Broadway producer. Upon her arrival, however, she was passed over by several serious producing offices because, though she was in her late twenties and had a master’s degree, she still looked like a chorus girl straight out of college. It was a professional liability until she met Margolies, who happened to like chorus girls straight out of college.

MISTAKEN - The Complete First Season by Peak, Renna
Mandie Collection, The: 8 by Lois Gladys Leppard
A Dedicated Man by Peter Robinson
Thrill Me by Susan Mallery
Cinnamon Crunch Murder by Gillard, Susan
The Luxe by Anna Godbersen
Eagle in the Snow by Wallace Breem
Human Conditioning by Hirst, Louise
Gunpowder by G.H. Guzik
The Cryo Killer by Jason Werbeloff