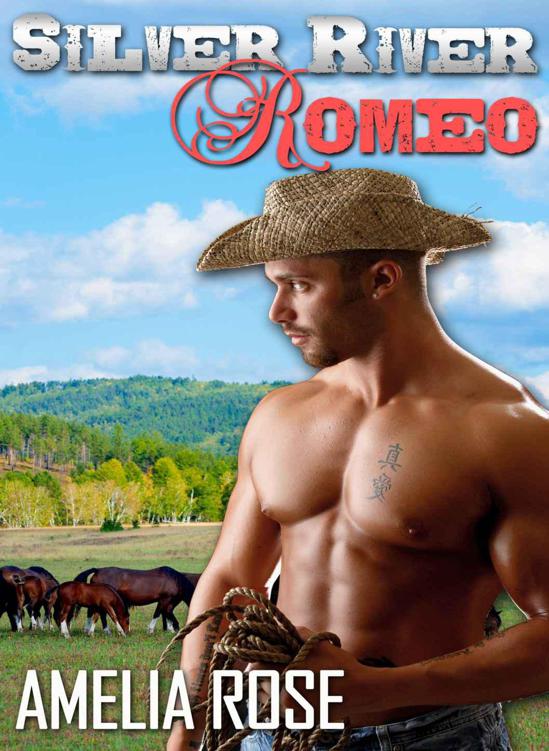 Cole McKenna tilted his hat down further over his eyes and squinted into the sun, trying to see the empty ranch from the edge of his own property. His horse shifted impatiently beneath him and he patted his neck.

“Easy, Sheriff,” he said absently. “I know we’ve got work to do. Give me a second, all right?”

The bay snorted, but it remained still. Cole couldn’t blame him.  He had probably made Sheriff make the long trek a bit too often over the last year. He didn’t have the chance to make it as frequently as he actually wanted to though as it wasn’t exactly a short ride from his own ranch. The Silver River Ranch, which he shared and ran with his brothers, wasn’t small. Even with a ride to the very edge of it, he couldn’t really see much of Raven Branch from here and what he saw was never interesting. Nothing much happened in the driveway of a ranch after all.

He’d used the recent storm as an excuse to come out here today. He’d told Marshall, his older brother, he would check the fence for damage. He had actually done that, but then he’d steered his horse over to the edge of the perfectly fine perimeter fence and looked at what had been the Carson ranch.

Marshall probably would have been as impatient with him as the horse was. There was always something to be done on a ranch and Marshall took it all very seriously, but Cole couldn’t help it. Raven Branch had been empty ever since Hank Carson had died last winter. His kids had headed off to the city years ago but even without anyone to help him work the ranch, the man hadn’t let one square inch of the place sell. He knew his kids were selling when he was gone, he’d said as much to Cole a few years ago. He wanted to enjoy it while he could.

Cole sighed. He hated to see the place go. Hank Carson had worked long and hard to keep it up and running smoothly and it was a shame to watch it all go to waste. Even the driveway, which was all he could see from where he sat, looked neglected. Cole realized it was a little depressing to be here this late in the evening, with the sinking sun illuminating all that great land going to seed from lack of someone to work it.

He was turning to ride back home when he saw a big black truck kicking up dust in the Carson’s long drive. There was a big orange U-haul hooked to the truck. It looked like someone had managed to buy the place, after all.

Cole brought the horse to a stop and leaned forward, listening to the leather of Sheriff’s saddle creak but he couldn’t see anything without jumping the fence and riding closer. Although he wasn’t discounting the idea entirely, he’d have to meet the neighbors at some point after all. However, he knew better than to try it today. The sun was already sinking lower than he’d realized and he still had his job to do. He steered the horse back to the western cow pasture to start rounding the animals up.

It wasn’t too hard to do, at least not today, and the job was soon done. He put Sheriff in the barn closest to the house and brushed him down quickly before dumping out some oats for his supper and rubbing his nose. He usually spent a bit more time with the animal after such a long ride, but he was anxious to talk with his brothers about the latest news.

He walked across the front yard and hopped the small white fence surrounding the sprawling farm style house. There was a gate, but something about hopping the fence always reminded him of being a kid again. If his mama had been alive, she’d be telling him to use the sense God gave him and come through the gate. Cole thought that maybe he did it to keep her close, too.

She had passed away when he was fourteen. Darrell had been ten and Marshall seventeen. Even though they and their dad had all done their best with it, the house was obviously lacking a woman’s touch. The pretty rose garden had turned nearly wild from neglect. The white paint on the picket fence was chipped and peeling from the hot sun and the paint on the house was no better. Twelve years was a long time for anything to go without maintenance.

Cole walked up the steps and crossed the wide front porch to the screen door, which he let bang behind him. He was surprised to find his younger brother in the kitchen, but then he realized that Darrell was most likely just out of food and probably not likely to be here to socialize. He didn’t tend to keep his own place very well stocked on perishables. Half the time, he seemed surprised by the very thought of going to the grocery store. The suspicion that he was hungry was confirmed when Cole saw the array of sandwich items on the counter.
Well, it was a good a supper as any,
Cole supposed. He grabbed a plate and put two slices of bread on it.

“Somebody bought the Carson place,” Cole said as he began layering meat and cheese.

“Saw it,” Darrell acknowledged as he held his hand out for the mustard Cole had just picked up.

“Why didn’t you say something?” he asked, slightly annoyed. It wasn’t as though he’d advertised the fact he was curious about Raven Branch, but he still felt like his brother could have passed along the news at some point.

“When does he ever?” Marshall demanded as he walked in. “Where’s mine?”

“Same place mine was,” Cole shot back. “In pieces on the counter.”

Darrell shot him a quick grin and headed toward the back door.

“Hang on just a second there, Darrell,” Marshall commented while topping off his sandwich.

Darrell paused just outside the door and raised an eyebrow.

Darrell nodded and headed across the field to the renovated barn he’d lived in since the age of eighteen.

“There’s his socialization for the month,” Marshall said.  He then turned to Cole.  “And what about you? Feel up to heading in?”

“Yeah,” Cole agreed around a big mouthful of dry sandwich. He’d forgotten the mustard. He pried the sandwich open again and added a generous amount before he went on, “Don’t know why you bother asking. You know you’re gonna make us go.”

“Old habits die hard,” Marshall said with a shrug. “I grew up having to be polite to you. I can’t do anything about it now.”

Cole laughed and walked out to the wraparound porch with his food. The setting sun lit the mountains up in a way he liked. It reminded him of bonfires and long summers. He moved his chair closer and propped his booted feet up on the porch rail. All he really needed to do to complete the picture was tip his hat forward over his eyes. He grinned at the thought, but he put his hat on his outstretched legs.

He’d expected to be totally content with his mediocre sandwich and great view. It had been a pretty long day. Actually, it seemed like they all were and this was his favorite way to relax after them. But he didn’t seem to be able to relax this evening.

The reason for his discontent hit him like a punch in the gut as a stray thought darted through his mind. He wished he’d had the money to get the Carson place.  He’d known better than to really spend any time hoping for it when it stood empty so he reasoned with himself that there was no point being upset over it now. Silver River was doing as well as it ever did. That wasn’t bad by any means, but the steady business just wasn’t enough to allow him to support two ranches.

Cole swallowed the resentment that fluttered to the surface with a long drink of the beer he’d grabbed on the way out of the kitchen. Darrell had been kind enough to leave two. He hoped Marshall didn’t want the other one because he really didn’t want to walk down to Darrell’s barn for a second drink. Anyway, there was nothing to really be resentful of. His father had left the house and the ranch in equal shares to all three boys. It was extremely fair and Cole seemed to be the only one who had a problem being tied to the ranch like they were.

Marshall had been born to run a ranch and that was why neither Darrell nor Cole had had a problem letting him take the reins when their father had a massive heart attack and dropped dead in the field three years ago. Darrell didn’t mind the ranching either, as long as it didn’t interfere with his rodeo riding. Marshall always made sure it didn’t because he was damn good at everything. Darrell might be the only second shift rancher in history. Cole realized he was frowning and his shoulders were tense and he sighed.
Some relaxing evening
, he thought. What the hell was his problem lately anyway?

It wasn’t that he didn’t want to ranch. He did. He loved ranching. He just didn’t want to ranch the way Marshall did. Marshall wanted to keep everything the same. Silver River had baled hay and ranched cattle since the McKenna clan had claimed the land. And Cole was tired of it.

What was wrong with horses, for God’s sake? Or corn? Or soy? How many times had he pointed out to Marshall that soy products were on the rise? Marshall had just nodded and gone back to doing things the way his father had done them.

Cole vowed that tomorrow would be different. They were going to town. He could show his older brother the prices on soy and get estimates for the profit. Maybe he could even convince Marshall to let him clear the back field. He felt some of the tension disappear as he began to plan his arguments. There might yet still be time to salvage his passion for the life he was stuck in.

The next morning, they ate a small breakfast and then headed to the barn to force Darrell out of bed and pick up Cole’s truck, which was parked in the shed near the barn.

“Wake up!” Cole yelled from the doorway of the renovated barn.

“You know that doesn’t work,” Marshall said as he bit back a yawn. “Go get him.”

“You go get him,” Cole insisted defiantly.