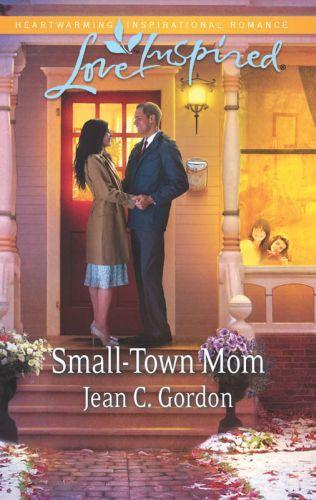 The Widow’s Rules Of Engagement

Jamie Glasser has two ironclad rules: raise her kids the best way she knows how and…no more military men! The widowed mother of three lost to the army her late husband—and her faith in God—but she can’t avoid former air force lieutenant colonel Eli Payton. The handsome high school guidance counselor is committed to helping Jamie’s rebellious teenage son. But it’s Jamie who’s tested when she’s irresistibly drawn to Eli. Here, in the family-centered community of Paradox Lake, can a woman at a crossroads find the courage to reclaim her faith and give love another chance?

“Go ahead, Mommy,” Opal said before Jamie could get her mouth open. “Rose and I already danced with Mr. Payton. It’s your turn.”

Something in the way Eli’s gaze rested on her face made her feel he wasn’t asking because it was her turn. She took a breath to calm the flip-flop in her stomach. “I’d love to.”

The smile he gave her in return undid any calm her cleansing breath had achieved. He walked around the table and took her hand. When they reached the makeshift dance floor, he placed his other hand on the small of her back and glided into the song with his usual athletic grace.

“No.” She relaxed and let him lead her in flow with the music. “You’re a great dancer.”

He laughed, soft and low, strumming a chord deep inside her.

writing is a natural extension of her love of reading. From that day in first grade when she realized
t-h-e
was the word
the,
she’s been reading everything she can put her hands on. A professional financial planner and editor for a financial publisher, Jean is as at home writing retirement and investment-planning advice as she is writing romance novels, but finds novels a lot more fun.

She and her college-sweetheart husband tried the city life in Los Angeles, but quickly returned home to their native upstate New York. They share a 170-year-old farmhouse just south of Albany, New York, with their daughter and son-in-law, two grandchildren and a menagerie of pets. Their son lives nearby. While Jean creates stories, her family grows organic fruits and vegetables and tends the livestock du jour.

Although her day job, writing and family don’t leave her a lot of spare time, Jean likes to give back when she can. She and her husband team-taught a seventh-and-eighth-grade Sunday school class for several years. Now she shares her love of books with others by volunteering at her church’s Book Nook.

You can keep in touch with her at
www.Facebook.com/JeanCGordon.Author
,
www.JeanCGordon.com
or write her at P.O. Box 113, Selkirk, NY 12158.

So be strong and courageous! Do not be afraid and do not panic before them. For the Lord your God will personally go ahead of you.
He will neither fail you nor abandon you.

To all of our men and women in uniform
past and present, with a special thanks
to my critique partners Chris D’Allaird,
former U.S. Army, and Bonnie Hazard,
who connected me with her brother currently serving in the army, and to my brother-in-law, former air force captain Wallace F. Gordon.

Not when she’d finally gotten her family through the worst. It had been a rough eighteen months. But Jamie Glasser thought her son, Myles, was on track and life back to normal. As normal as could be under the circumstances.

She replayed the voice mail message as she pulled her crossover SUV into the Schroon Lake Central School parking lot and steeled herself to meet the new guidance counselor.

She got out and slammed the vehicle door shut. The guidance counselor’s curt summons had put her on edge almost as much as imagining what Myles had done to prompt the call.

“Jamie,” Thelma Wood, the ageless office manager, greeted her as she entered the K-12 school’s main office to sign in. The older woman’s cool tone clearly said she hadn’t gotten over her displeasure with Jamie having given up her position as school nurse to join the midwife practice at the Ticonderoga birthing center.

“Thelma.” Jamie wrote her name, the time and her in-school destination on the clipboard on the counter separating Thelma’s business domain from students, parents and the rest of the general public.

“I expect you’re here to see our Mr. Payton.”

Our Mr. Payton.
The new guidance counselor must be really something to have Mrs. Woods claiming him as her own after being on the job only a month.

“He and Myles are in the guidance office.”

Myles?
The phone message hadn’t said that the guidance counselor had kept Myles after school. That meant he wouldn’t be there with the girls when the bus dropped them off.

Jamie turned the clipboard so that Mrs. Woods could read the sheet, left the office and pulled out her cell phone.

“Hello,” her friend Emily Stacey answered on the second ring.

“Hi, it’s Jamie.” She hesitated for a moment. Since she’d lost her faith and dropped out of the Singles Plus group and everything else connected with Hazardtown Community Church after her husband was killed in Afghanistan, Jamie hadn’t seen much of Emily. But Emily was the only person she could think of who would be home. “Any chance you could run over and meet the girls’ bus?”

“Sure. Is everything okay?”

“Myles is in some kind of trouble—again. So he won’t be at the house when they get off the bus.”

“I’m sorry. Any problem with my bringing them over here?”

“Not at all.” Gratitude flushed away the guilt Jamie harbored about neglecting their friendship these past few months. “Thanks so much.”

“Not a problem. You’d do the same. Good luck with Myles.”

Considering some of her son’s antics last year, she might need it. “I’ll come get the girls as soon as I can.”

“Whenever. I’m planning on putting them to work entertaining Isabelle and Ryan so I can finish an ad mock-up I need to get out to a client today.”

Jamie hung up and headed down the familiar hall. The knot in her stomach tightened with each step. She slowed her pace as she neared the guidance office, postponing the meeting as long as she could.

After a trying school year, where Myles seemed to be in some kind of trouble every other week, he’d had a good summer as a junior counselor at Camp Sonrise on nearby Paradox Lake, where she’d been the camp nurse the three previous summers. Before she’d had to take a better-paying, year-round job at the birthing center. Jamie had been a little jealous of Myles. She’d really liked being with the kids at Sonrise full-time during the summer months.

The guidance office door was ajar. Jamie paused. She couldn’t go through another school year like last year. Taking a deep breath, she pushed the door open to see Myles sitting in front of the guidance counselor’s desk with his back to her.

“Mrs. Glasser?” The man seated at the desk didn’t wait for her to answer. “Please come in and sit down.”

She shot Myles a look before turning her attention to the counselor. His strong-featured masculine good looks at least partly explained fussy Mrs. Woods’s warming to him so quickly.

His glance at the wall clock and the fleeting frown that marred his ruggedly handsome face muted any welcome in his deep voice and polite words.

“I’m Eli Payton.” He rose in a smooth, controlled manner and offered her his hand.

Something in the way Eli moved and spoke—his brisk handshake and curt phone message—reminded Jamie of her late husband, John. She gave Eli a quick once-over. The high and tight hair. The way his off-the-rack suit hung on his fit figure as if it were tailored especially for him. His clean, neat desktop devoid of any unnecessary personal items. After a spark of attraction, bile burned the back of her throat.

Eli Payton was a soldier, a career soldier. Someone who wasn’t used to being around military personnel might not see it, but Jamie did.

So why was he working as a high school guidance counselor?

She pulled her hand back as soon as he released it and unbuttoned her coat. She slipped her coat onto the back of the chair next to Myles, sensing Eli’s eyes on her. What was she doing? She didn’t
know
he was former military. She just had a strong feeling he was. And if he were, that wasn’t a good reason to dislike him.

As she turned back toward him and took her seat, Eli glanced at the clock again. Jamie rechanneled her irritation. It wasn’t her fault that it was well after the close of classes. She wasn’t the one who’d called the meeting. If he had somewhere to be, he could have asked her to come in tomorrow morning.

She planted her feet firmly on the floor, her white Crocs squeaking as she pressed them to the polished tiles. And no matter how many times he checked the clock, he wasn’t going to make her feel that she was in the wrong because she’d been doing her job and hadn’t gotten his phone message until after she and the midwife had finished the delivery. Except she did feel uneasy, and his dismissive perusal of her hospital scrubs didn’t help. It wasn’t as if she’d had time to go home and change.

Jamie pinned her gaze on her son who had evidently found something riveting on the floor between his chair and the guidance counselor’s desk. “What incident notice?”

Eli raised an eyebrow and pushed an all-too-familiar yellow form across the desk to her. She read down to her signature. Except it wasn’t
her
signature.

“I didn’t see or sign this.” She moved the paper a few inches away from her.

“So I gather,” Eli said with a wry smile that would have normally appealed to her sense of humor. But there was nothing humorous about this situation.

“Myles. Seriously? What were you thinking?”

“Stealing exam answers and selling them to other kids isn’t a big deal? Since when?” Jamie tried to keep the screech out of her voice but failed.

“I didn’t steal the answers. I went back into Mrs. Norton’s room to get my iPod.” He waved his hand at her. “I know. I’m not supposed to take it to school. When I was leaving, there was this paper on the floor.”

“The exam answer key was on the floor?” Eli’s voice had an edge to it that Jamie wouldn’t want used on her. She felt sorry for Becca Norton, Myles’s history teacher, if Myles was telling the truth.

“No, it was just a paper. I crumpled it up and shot it across the room at the trash can.” Myles grimaced. “I missed, so I went over to toss it in the can and I saw the test in there. It wasn’t the final test. It didn’t have the answers, and Mrs. Norton had scribbled through the questions. I told you, I didn’t steal the answers.”

“The answers, the test. Not a lot of difference,” Jamie said.

Silencio sepulcral by Arnaldur Indridason
The Bell by Iris Murdoch
Marri's Approach (Brackish Bay) by Cerise Noble
Caught Stealing (2004) by Huston, Charlie - Henry Thompson 01
A Race Against Time by Carolyn Keene
Another Chance by Wayne, Ariadne
Ex-girl to the Next Girl by Daaimah S. Poole
Sunburst (Starbright Series) by Higginson, Rachel
I Don't Want to Be Crazy by Samantha Schutz
KC Frantzen - May the K9 Spy 02 - May Finds a Way: Peril in Paris by KC Frantzen