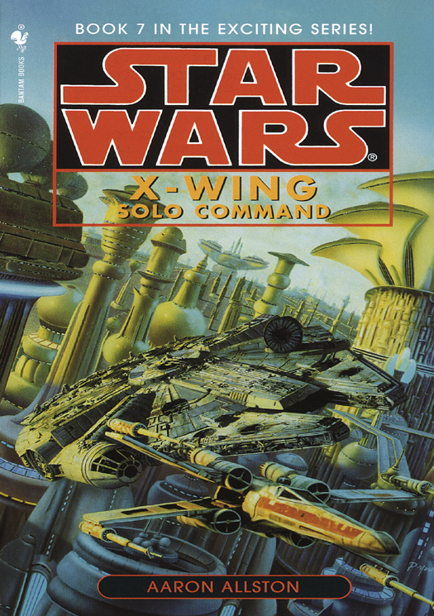 Wraith Squadron: they are the Rebel Alliance's ultimate strike force. Sleek, swift, and deadly, they are the first in battle, the last line of defense. Now they must find and destroy a wily enemy more powerful than the Empire itself.
Their covert mission has been a success. The enemy has been vanquished. Or so they thought. The Super Star Destroyer Iron Fist somehow escaped destruction and with it the New Republic's greatest threat, the infamous warlord Zsinj. To defeat him, Wraith Squadron must join a combat task force led by the only man crafty enough to beat Zsinj at his own game: Han Solo.
But Zsinj knows the X-wing fighters' indomitable courage is both their greatest strength--and their greatest weakness. For even against the most overwhelming odds, the Rebels will fight to the death. And that will leave Zsinj the galaxy's unchallenged master!
Features a bonus section following the novel that includes a primer on the
Star Wars
expanded...

Just as the air thinned to the point that the stars shone with brilliant, unblinking clarity, the first laser blast sizzled past the Corellian freighter’s port side. “A long-distance shot,” Wedge said.

Tycho’s voice came back, “Easy to hit a flying bathtub like the one you’re driving even with a long-distance shot. Permission to engage?”

“Not yet. Wait until it gets complicated.” Wedge spared a moment to look at his sensors. The squadron of TIEs was only a kilometer back. Kell’s Drakes were only half a klick behind them and closing fast. And a new signal was on the board—a second full squad of TIEs from the ground base. It was going to get complicated soon.

Moments later, a shot hit the rear shields. On the sensors, Wedge saw two wingpairs of TIE fighters peel off and curve around toward Kell’s group. “That’s it,” Wedge said. “Rogue Two, you are free to engage. Chewie, you have the controls.” He unbelted and moved aft.

Wedge clambered into the upper gunport turret and powered up. His targeting grid immediately lit up with glows, most of them red—enemies.

THE BLACK FLEET CRISIS
by Michael P. Kube-McDowell
#1: BEFORE THE STORM
#2: SHIELD OF LIES
#3: TYRANT’S TEST

TALES OF THE BOUNTY HUNTERS
edited by Kevin J. Anderson

CHILDREN OF THE JEDI
by Barbara Hambly

SHADOWS OF THE EMPIRE
by Steve Perry

I, JEDI
by Michael A. Stackpole 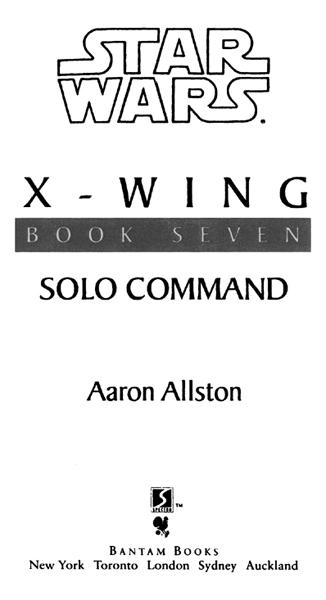 SPECTRA and the portrayal of a boxed “s” are trademarks
of Bantam Books, a division of
Random House, Inc.

© 1999 by Lucasfilm Ltd. & TM
All rights reserved. Used under authorization.
Cover art copyright © 1999 by Lucasfilm Ltd.
No part of this book may be reproduced or transmitted in any
form or by any means, electronic or mechanical, including
photocopying, recording, or by any information storage and
retrieval system, without permission in writing from the publisher.
For information address: Bantam Books.

Bantam Books are published by Bantam Books, a division of Random House, Inc. Its trademark, consisting of the words “Bantam Books” and the portrayal of a rooster, is Registered in U.S. Patent and Trademark Office and in other countries. Marca Registrada. Bantam Books, 1540 Broadway, New York, New York 10036.

Bruce Harlick, Kevin Jennings, Beth Loubet, Matt Pinsonneault, Susan Pinsonneault, Bob Quinlan, Roxanne Quinlan, Luray Richmond, and Sean Summers, my “Eagle-Eyes,” whose efforts to intercept my errors of thought and deed keep me from looking quite as foolish as I otherwise might;

All the
Star Wars
fiction authors from whose work I have been able to draw details, most especially Michael A. Stackpole and Timothy Zahn;

The netizens of alt.fan.wedge, for their support and commentary;

Sue Rostoni and Lucy Autrey Wilson of Lucas Licensing, for their help; and

Denis Loubet, Mark and Luray Richmond, my roommates, for occasionally reminding me to eat, sleep, and breathe.

Also by this Author

Introduction to the Old Republic Era

Introduction to the Rise of the Empire Era

Introduction to the Rebellion Era

Introduction to the New Republic Era

Introduction to the Legacy Era

Double Down by Desiree Holt
Names Have Power: Tim's Magic Voice Makes A Harem by MC, Doctor
What She Saw by Roberts, Mark
Man of La Mancha by Dale Wasserman
Irish Linen by Candace McCarthy
Shadow of the Moon by Rachel Hawthorne
Visions, Trips, and Crowded Rooms by David Kessler
Space For Hire (Seven For Space) by William F. Nolan
Jane and the Genius of the Place: Being the Fourth Jane Austen Mystery by Stephanie Barron
Prince: A Biography by Mitchell Smith