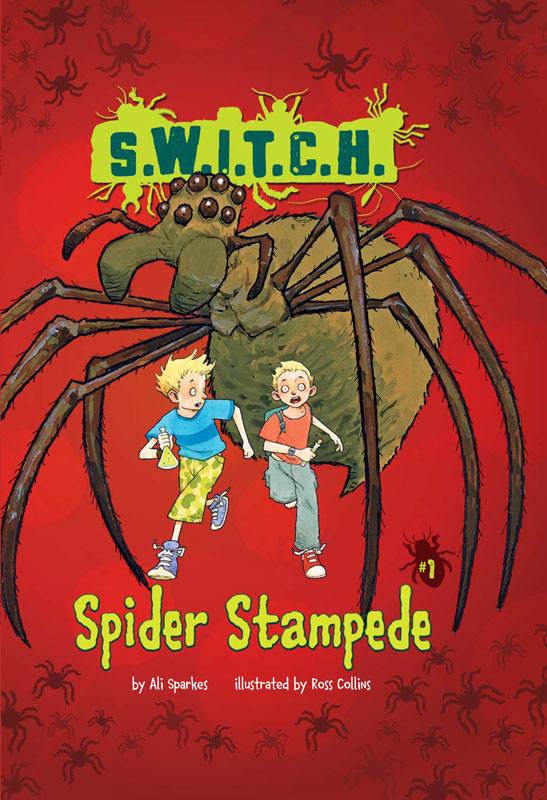 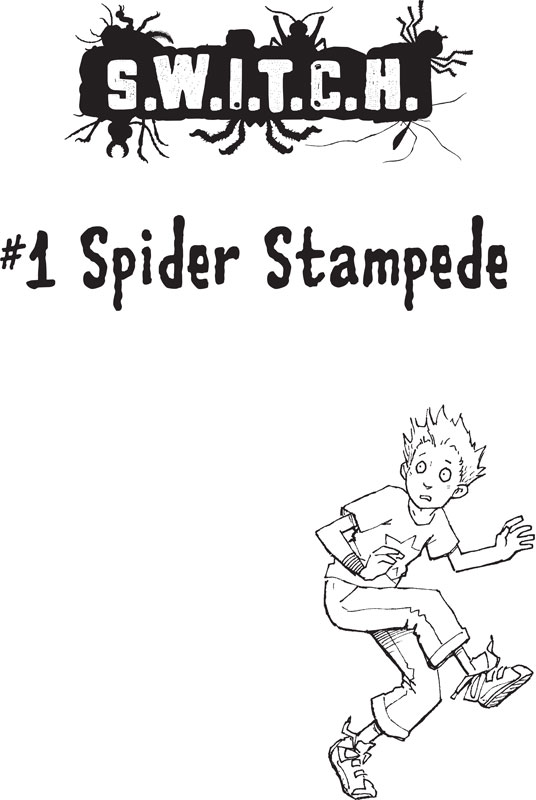 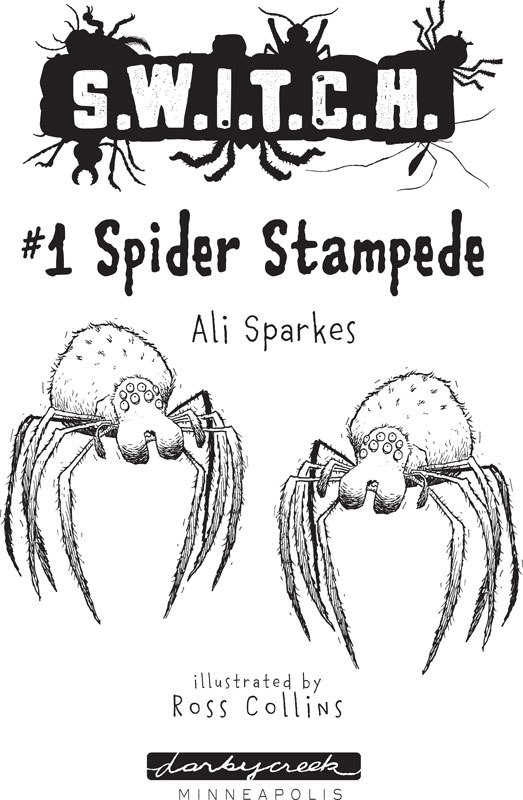 “SWITCH: Spider Stampede” was originally published in English in 2011. This edition is published by an arrangement with Oxford University Press. 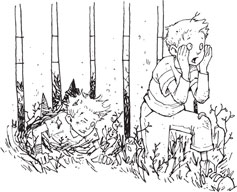 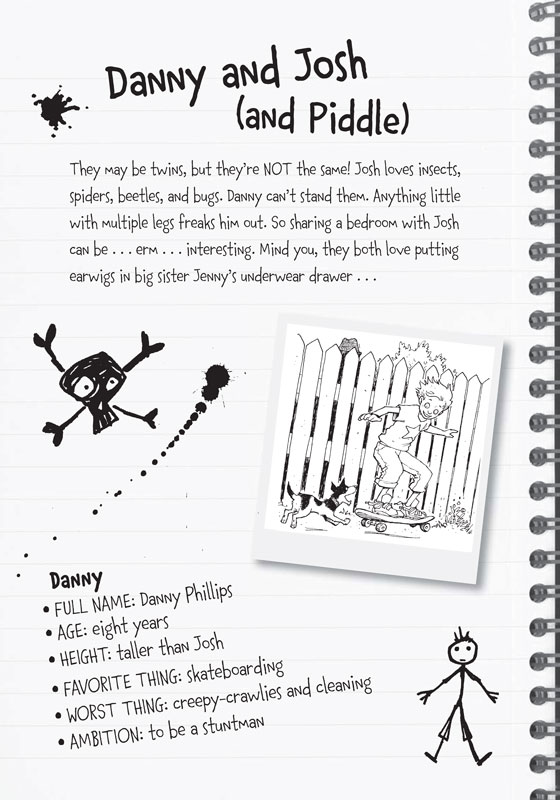 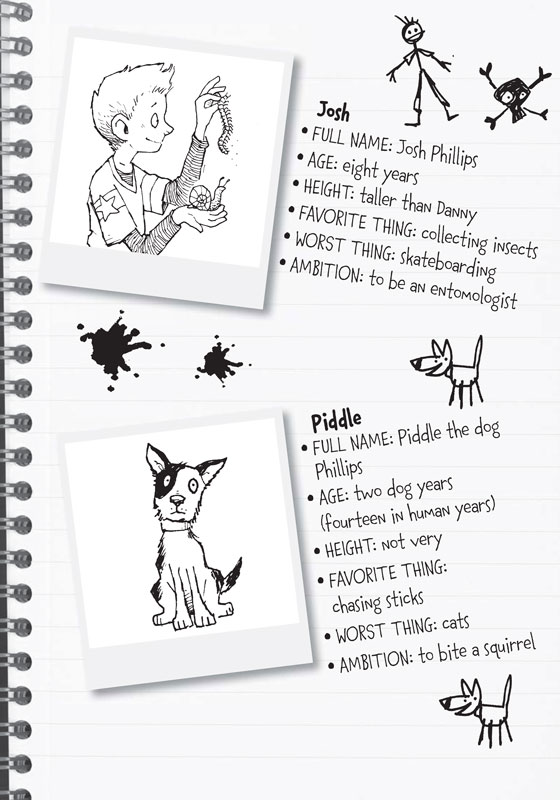 A Bit of Gas

Josh looked up from his book. He saw his twin brother running around in circles by the hedge. He was wearing nothing but swimming trunks and a look of panic.

He was also wearing a spider.

“DON'T just sit there!” squeaked Danny. He whirled around. “Get it OFF!”

Josh sighed. He put his book down on the grass. It was amazing, he thought, that the spider could possibly hang on while his brother was thrashing about so wildly. It was a garden spider and quite large. Probably female. It had run up Danny's arm when he went to pick up his water pistol. Then it had scampered over his shoulder. Josh knew this because of the kind of dance his brother had just done across the grass. A sort of backward shimmy, with gasps of horror. Followed by wildly flapping arms and then the whirling as his unwelcome passenger legged it down his shoulder blade.

“You could win the Under Nines Dancing Championship,” Josh said. He dodged under a flailing arm to scoop up the dizzy spider. It was now hanging onto the waistband of Danny's trunks.

“Yes, calm down. Look! She's a beauty!” Josh cupped the spider in his hands. He held it out for Danny to see. It was nut brown with mottled yellow patterns on its back.

“But look! She's got these amazing feet that can hook on to stuff while she's hanging upside down andâ”

“Just STOP talking about the S-P-I-D-E-R!” growled Danny. He shuddered and refused to look. Josh gently dropped it behind the shed. 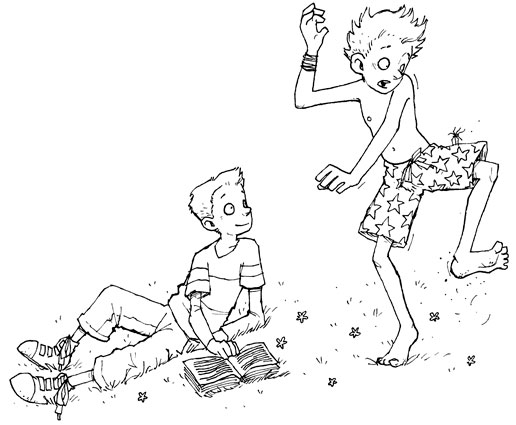 “She'll be back over by the hedge again in no time,” said Josh. This didn't comfort his twin much. “Along with all the others. You're never more than a few feet away from a spider, you know.”

“Not
one
more
word
aboutâ¦thoseâ¦
things
!”

A White Coat Is My Closet by Jake Wells
The Spider Catcher (Redemption by A.L. Tyler Book 1) by A.L. Tyler
Blood Legacy: The Story of Ryan by Hawkins, Kerri
All That Matters by Flagg, Shannon
Hidden Agenda by Alers, Rochelle
Sassy Ever After: Sassy and a little Bad-Assy (Kindle Worlds Novella) by Jessie Lane
Cam Jansen and the Summer Camp Mysteries by David A. Adler
The Fairbairn Girls by Una-Mary Parker
Sofia by Ann Chamberlin
Stepbrother's Unbridled Passion Boxed Set by Terry Towers