The room smelled strange. Very strange. It still reminded him of school. Like the room where they did science. And there was a hissing noise. Piddle was standing very still with the fur on his back sticking up. He was scared. “It's all right, Piddle. We've found you!” said Danny. And pushing the plastic sheeting open, he went into the strange tent. Josh gave a swift glance around, noticing some odd machinery and a kind of glass booth, glowing green, off to the left. He hurried in after Danny.

“Come on. Let's get out of here! It gives me the heebie-jeebies,” he said. Danny gathered the shivering Piddle up into his arms.

Then the hissing got louder. Something cool sprayed across their bare legs.

“What was
that
â¦?” gasped Danny.

Suddenly, Miss Potts's voice rang out. “Who's that! Who's in my lab?”

Danny grabbed Josh's arm. They hurtled back along the dark, damp passage.

“HEY! STOP! Come back here!” yelled Miss Potts. They could hear her thumping across the wooden floor of the weird secret room behind them.

Josh and Danny leapt up the steps, two at a time. Piddle yelped excitedly over Danny's shoulder. His ears were flapping around, and his pink tongue was hanging out.

“STOP! I know who you ARE!” bellowed Miss Potts.

Danny, Josh, and Piddle almost fell into the garden. Miss Potts's bony hand swatted the sack curtain aside behind them. 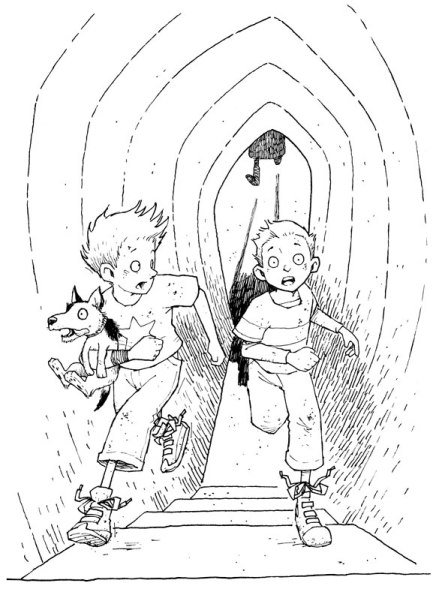 They hurtled back through the overgrown weeds. They shoved Piddle under the fence and scrambled after him as fast as they could go.

Back on their own side, they didn't stop running. Josh and Danny belted straight into the house and upstairs, as if a wild beast was chasing them. It wasn't until they got to the landing that they collapsed in a heap and started to laugh. Piddle sniffed at their legs and sneezed. Then he trotted off into their bedroom.

“Ugh!” Danny peered at his legs. They looked kind ofâ¦yellow. And they had that weird smell they'd noticed in the secret laboratory. Josh's legs were also covered in the same strange liquid.

“Come onâlet's get this stuff off!” said Josh. They clattered into the bathroom.

“Hey! Don't you two go in there! I'm just about to take my bath!” yelled Jenny, from her bedroom.

They took off their shoes and socks and rolled up their shorts. They stood up in the big bathtub.

“What
is
this stuff?” Danny wrinkled his nose.

“Whatever it is, it's coming off,” said Josh. He grabbed the shower attachment but dropped it. 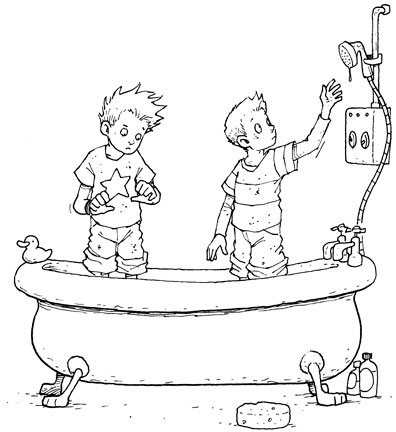 Then the bath started to growâ¦

Its curved metal rim suddenly shot high, high up beyond their heads. The flat base with its little square of antislip bumps suddenly stretched out beneath and around them until it was the size of a basketball court and the bumps were small hills. 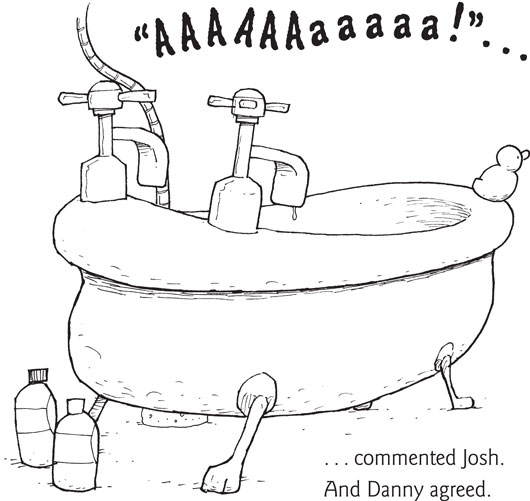 The plug was now the size of a playground merry-go-round. It was hanging off a chain that wouldn't have looked out of place attached to the anchor of a warship.

Danny went along with that.

At last the growing seemed to stop. They were in a vast white valley of bathtub.

“What's going on?” whimpered Danny. “What happened to the bathtub?” His voice sounded a bit funny. Sort of raspy. And his eyes felt very odd. He seemed to be able to see around corners at the same time as straight aheadâ¦

Behind him came Josh's voiceâalso a bit raspy. “Umâ¦Danny. Promise me you'll stay calm.” Josh stared into the shiny mirrorlike top of the giant shower attachment. It was leaning against the side of the incredibly huge bath. He gulped and blinked some eyes. Yep. His reflection was still the same. He wasn't dreaming it.

“What
is
that?” Danny found himself moving, rather smoothly and swiftly, he thought, toward a huge round well. Above it rested the immense plug on its gigantic chain. The top of the plug was also shiny and mirrorlike. In it Danny saw something huge and hairy and standing high on eight legs. It had eight eyes and a rather surprised expression. And it MUST BE RIGHT ON TOP OF HIM!!!!! 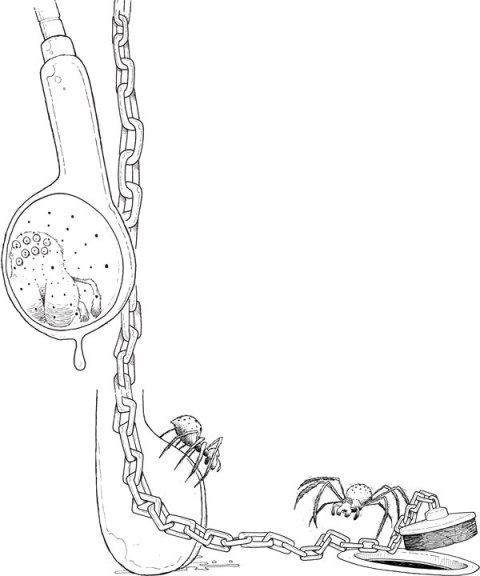 Danny's mandibles quivered. He looked around. He saw yet another spider over by the showerhead where Josh's voice was coming from. His eight eyes rolled up. At least sixteen knees went weak. Then, in a tangle of legs, he fainted.

Josh ran across to the collapsed body of his brother. He got hold of Danny's shoulder areaâor “thorax” if he was being correctâusing his palps (the little arms on either side of his head) and his two front legs.

“Danny! Wake up!” he shouted in his odd raspy voice. It was probably pointless, though. Danny would most likely just scream and faint again as soon as he saw his brother. Or his own reflection. Like it or not, believe it or not, they had both just turned into spiders. Josh's brain was doing backflips. He was trying to take this amazing fact in and work out how it had happened. But he didn't have much time for pondering. He heard a terrible low roaring sound that made the metal under his eight feet vibrate. A shadow fell across him, and he looked up to see a horrifying sight.

Raising her gargantuan right hand, in which was grasped a titanic sandal.

Jenny's scream came out incredibly slowly in a weird rumbly voice, as if she had a very sore throat.

Her blonde ponytail swung sideways in a huge slow swoop. Her eyes were large and round and shiny. Her vast gaping mouth looked like a terrifying gooey red tunnel.

Even though everything she did was in slow motion, the sandal was now halfway into Bathtub Valley and heading straight for them. They were about to be pulped.

“
Danneee!
” screamed Josh. He pulled his brother toward the drain. At last Danny's eyes opened. They started to roll up again as soon as they clapped themselves onto Josh. Josh cuffed Danny's mandibles with a spare palp and said, “Cut it out! Don't you dare faint again! We've got to run!” 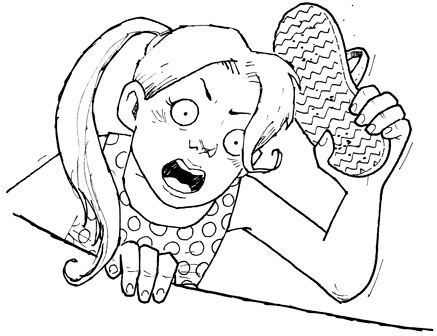 Now the sandal was casting a deadly shadow over them. Josh could smell its rubber sole. He and Danny ran for it. They zipped across to the huge round black well. Then they teetered out on its metal crossbars for just a second before the sandal smashed down right next to them. A gust of rubbery wind knocked them both over. One second later, they were falling down the drain. 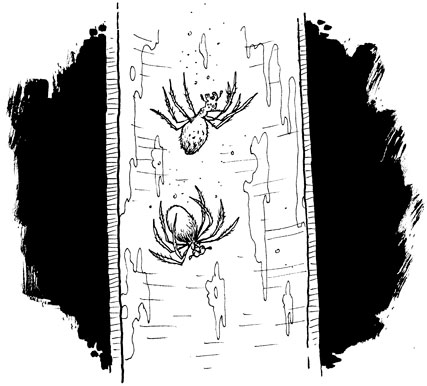