Stand Your Ground: A Novel 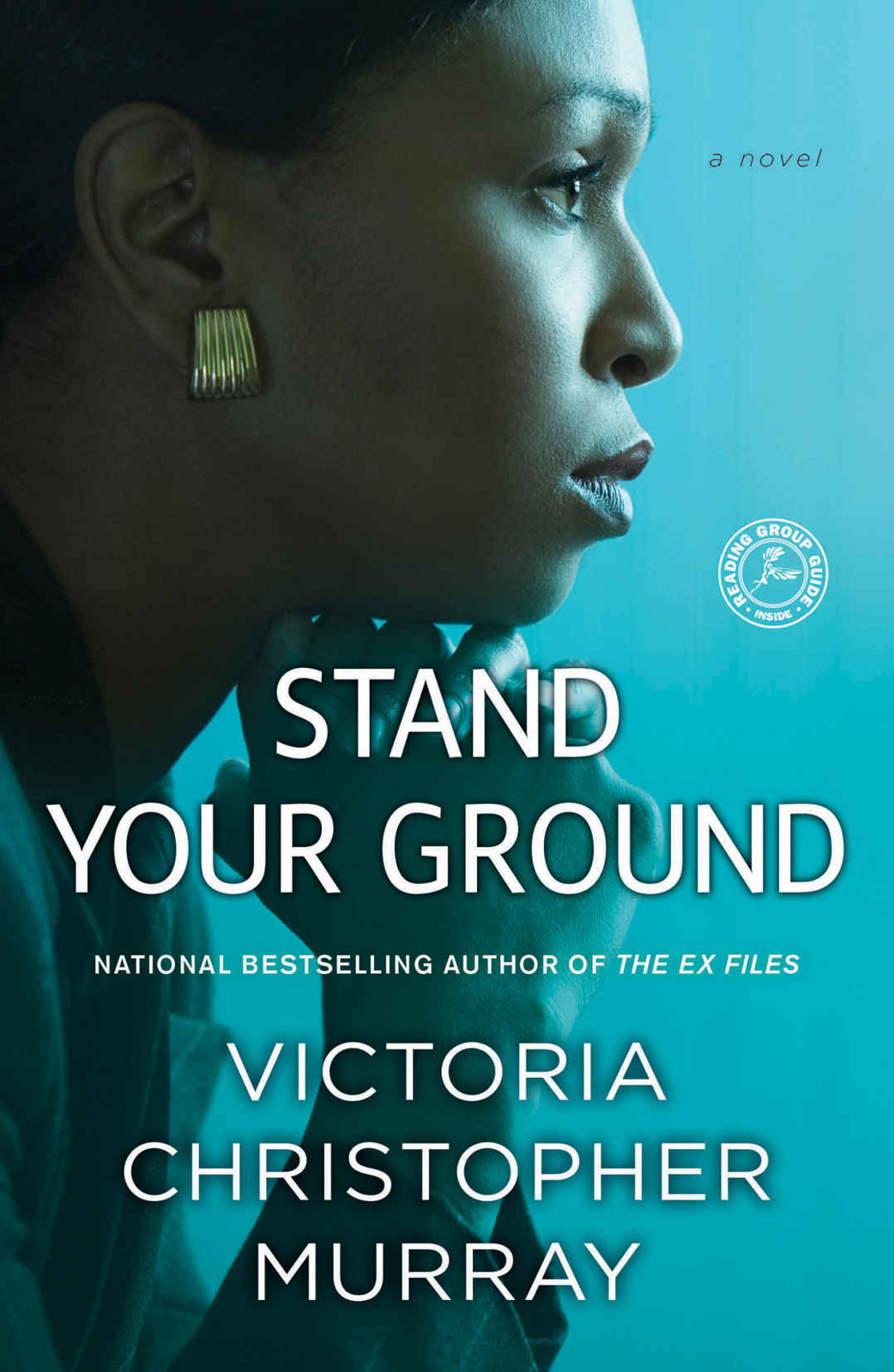 “Murray spices up her story line with plenty of juicy scandals . . . Readers seeking an inspirational tale with broad themes of trust, betrayal, and forgiveness will do well by choosing Murray’s latest effort.”

“The scandalous characters unite again in
Fortune & Fame
, Murray and Billingsley’s third and best collaboration. This time brazen Jasmine and Rachel, who has zero shame, have been cast on
First Ladies
, a reality TV show that builds one’s brand and threatens to break another’s marriage. Sorry, buttered popcorn is not included.”

“Priceless trash talk marks this story about betrayal, greed, and stepping on anyone in your way. A great choice for folks who spend Sunday mornings in the front pew.”

“Readers, be on the lookout for Victoria Christopher Murray’s
Never Say Never
. You’ll definitely need to have a buddy-reader in place for the lengthy discussion that is bound to occur.”

“The engrossing transitions the women go through make compelling reading . . . Murray’s vivid portrait of how faith can move mountains and heal relationships should inspire.”

“Reminds you of things that women will do if their hearts are broken . . . Once you pick this book up, you will not put it down.”

“With
Destiny’s Divas
, author Victoria Christopher Murray triumphs again. The depth and storytelling mastery in her latest novel demonstrate why she is the
grande dame
of urban Christian fiction.”

The Deal, the Dance, and the Devil

“Murray’s story has the kind of momentum that prompts you to elbow disbelief aside and flip the pages in horrified enjoyment.”

Sins of the Mother

“
Sins of the Mother
shows that when the going gets tough, it’s best to make an effort and rely on God’s strength. It gives the message that there is hope no matter what, and that people must have faith.”

“She’s back! Jasmine has wreaked havoc in three VCM novels, including last year’s
Too Little, Too Late
. In
Lady Jasmine
the schemer everyone loves to loathe breaks several commandments by the third chapter.”

“Jasmine is the kind of character who doesn’t sit comfortably on a page. She’s the kind who jumps inside a reader’s head, runs around and stirs up trouble—the kind who stays with the reader long after the last page is turned.”

Too Little, Too Late

“[In this book] there are so many hidden messages about love, life, faith, and forgiveness. Murray’s vividness of faith is inspirational.”

“An excellent entry in the Jasmine Larson Bush Christian Lit saga; perhaps the best so far . . . Fans will appreciate this fine tale . . . a well-written intense drama.”

A Sin and a Shame

“Riveting, emotionally charged, and spiritually deep . . . What is admirable is the author’s ability to hold the reader in suspense until the very last paragraph of the novel!
A Sin and a Shame
is a must read . . .Truly a story to be enjoyed and pondered upon!”

“
A Sin and a Shame
is Victoria Christopher Murray at her best . . . A page-turner that I couldn’t put down as I was too eager to see what scandalous thing Jasmine would do next. And to watch Jasmine’s spiritual growth was a testament to Victoria’s talents. An engrossing tale of how God’s grace covers us all. I absolutely loved this book!”

Why I Wrote
Stand Your Ground

N
ot again
were words that kept reverberating through my mind on February 15, 2014. We were just about six months from George Zimmerman’s acquittal of Trayvon Martin’s murder, and as I watched the verdict come down in the first trial of Michael Dunn (the man who murdered Jordan Davis) I felt like this country was taking giant leaps backward.

It had happened again. While Michael Dunn had been found guilty of attempted murder, the jury couldn’t reach a verdict on the murder charge for Jordan Davis’s death.

Of course my social media timelines blew up. People were upset and rightfully so . . . though, I didn’t understand the specific reactions. People were attacking the men and women of the jury, and then there were those who were once again calling for America to boycott one of its own states. “Nobody go to Florida!” became the social media mantra.

That confused me—I didn’t understand how people could get upset with Americans who had not only stepped up to fulfill their jury duty, but who were following the law. And it was even more confusing that people wanted to boycott Florida when two dozen other states had some version of the same law. So, what . . . were
people going to boycott every state? Were they going to boycott the states where they lived?

I couldn’t make sense out of what I thought was nonsense. I couldn’t understand why people were attacking juries and attacking states, and not going after the real culprit. Why not make this a political rallying cry? Why not register thousands of people to vote? Why not go after the law?

And while this idea began to brew inside of me, one of my friends on Facebook said, “Victoria, you should write a book about this.” Others agreed, saying they believed that I could teach something. That was when I knew that I did have a platform to reach thousands of people about this—I could do it through entertainment; I could do it through a book.

It was my editor who challenged me to add layers to this story and to show both sides of this tragedy. It was my publisher who gave me the title.

And so it was on and I was ready.

But then I wasn’t as ready as I thought. When I sat down and thought about these women in
Stand Your Ground
—the mother of the victim and the wife of the shooter—it became such a difficult book to write. Of course, the emotions that I had to write for the mother were clear and obvious. What I didn’t expect was to feel for the wife of the shooter. These were two women who were suffering—in different ways, but still, both suffered. And as I lived with both of them in my head for all of those months, I suffered with them.

Another thing that surprised me a bit about writing this book was the language. I believe in always being true to my characters, but to this point, profanity hasn’t had any place in my novels. It’s not as though there is much in
Stand Your Ground
, but I’m sure you can imagine that the N word—a word I abhor—comes up a time or two.

But if I wanted to write the truth—which I always try to do—if I wanted to speak to the two opposing sides of Stand Your Ground, I had to speak their language, especially the language they would use in this particular situation.

So, I went with my characters. And I took this journey. Never before could I say that a book I’ve written has changed me. But writing this one did. It wasn’t writing this book alone that changed me—it was that I was halfway through when Eric Garner was choked to death in New York and then Michael Brown was executed in the streets of Ferguson. I wrote this novel while those incidents and their aftermath played as background music in my mind.

And that begins with repealing Stand Your Ground.

We must know the facts. We must never forget . . .

T
here is nothing like being in love with a naked man.

Now, I’m not saying that I didn’t love my husband when he was fully clothed. But right now, right here, all I could do was perch myself up on my elbow and enjoy as my husband strutted around our bedroom as if he were looking for something. He wasn’t looking for a doggone thing; Tyrone was just giving me a show.

And what a show it was, ’cause there is nothing like a naked, carved, then chiseled to perfection, chocolate man.

“What are you staring at?” Tyrone’s voice broke through my thoughts. He flexed his pecs and inside, I moaned. “What? What are you looking at?” he asked again.

Really? He was standing there, full frontal, and he was asking me what I was looking at? Did he want me to describe the human statue of excellence that he was to me?

I answered my husband. “Nothing. I’m not looking at anything.”

He busted out laughing, then leaned over and kissed my forehead.

I tugged at his arm, trying to pull him down on top of me so that I could do more nasty things to him. If our life were a book, it would’ve been titled
Love and Sex
. It had started with the marriage counselor that my best friend, Syreeta, had referred us to after “the cheating incident.”

Terra Incognita: A Novel of the Roman Empire by Ruth Downie
The Future of Us by Jay Asher
The Third Lynx by Timothy Zahn
The Playdate by Louise Millar
Battle Dress by Amy Efaw
The Highlander's Curse by Katalyn Sage
A Framework for Understanding Poverty by Ruby K. Payne
Field of Pleasure by Farrah Rochon
Between a Heart and a Rock Place by Pat Benatar
Under the Blood-Red Sun by Graham Salisbury