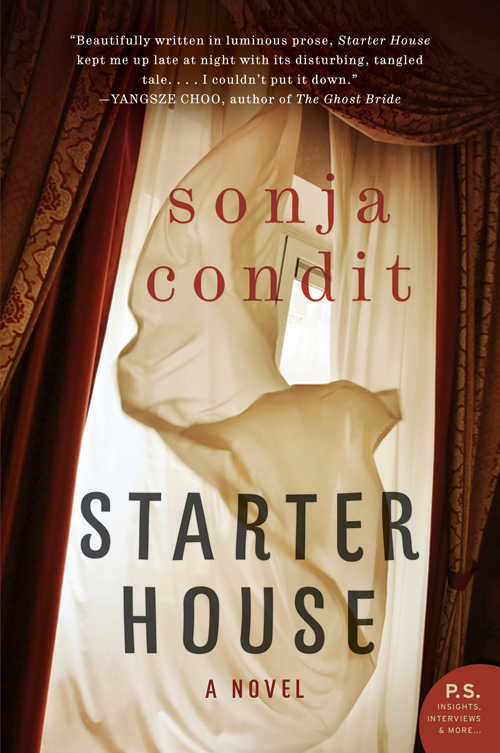 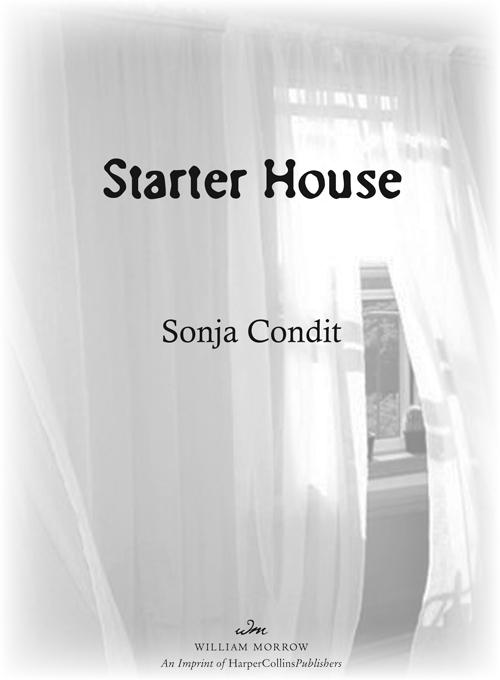 For Brent, Ethan, and Rebecca

THANK YOU, FIRST OF ALL,
to the wonde
rful faculty at Converse College’s MFA program: my mentors, Leslie Pietrzyk, R. T. Smith, Marlin Barton, and Robert Olmstead; and to Rick Mulkey, Susan Tekulve, and Melody Boland, who kept the whole thing going. Thank you to Jenny Bent and Carrie Feron, for dragging me through the process, and to Nicole Fischer, for answering all of my questions so patiently. Most of all, I would like to thank my husband, Brent, for believing in me even when I doubted myself. 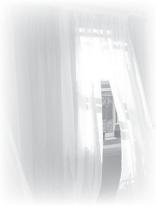 “Triangles,” Eric said, as if he’d never heard of such a thing. They shared the backseat of the Realtor’s Tahoe, he with his binder of fact sheets organized by street name, she with her sketchbook, outside of their one hundred and eighth house. Lacey wanted to like it. She wished she could say,
This is the one, I love it,
for Eric’s sake, because he was getting anxious as their list of houses dwindled from the twenties to the teens, but she just couldn’t. This house with its square utilitarian front, so naked and so poor—if Eric settled for it, he’d be miserable by Christmas. They’d had enough of square houses, bland rooms no better than the motels she’d grown up in and the apartments they’d lived in together, houses without memory. They couldn’t live that way anymore, with the baby coming.

“Triangles,” she said, shaping one in the air with her hands. “Gables. Dormer windows. Look at that thing; a person could die of actual boredom. What about the one with the bay window?”

Eric flicked through his binder. “Bad neighborhood. Two title loan stores and a used car lot right around the corner.”

The Realtor turned in the front seat. She was on the phone with her office, trying to find another house in the neighborhoods acceptable to the Miszlaks. Although three thousand homes were for sale in Greeneburg County (many of them in the city of Greeneburg itself) this first week of June, the Miszlaks’ requirements limited them to Forrester Hills, on the northeast side of town. Lacey, three months pregnant and planning her baby’s perfect childhood, had mapped the attendance zones of the good schools. Eric drew a circle around his uncle’s law office, so he would have no more than a twenty-minute commute. The circles crossed only here.

CarolAnna Grey, the Realtor, had become steadily less blond over three weekends of driving the Miszlaks from house to house. Lacey felt sorry for her; she kept taking them to houses that failed one or more of their criteria, usually Eric’s. He had grown up in Glenaughtry, Greeneburg’s finest golf neighborhood. He had standards.

“This is my neighborhood,” CarolAnna said. “I’ve lived here all my life.”

“You’re going to have to open up your search.”

“No,” they said together, and Eric turned pages in his binder and said, “What about the blue house around the corner, Lacey? It had those windows you like.”

Lacey fanned her sketchbook and found her impression of the house: a toadstool with fumes rising from its gills. “Smelled of mold.” It smelled like a basement apartment with carpeting so dirty it sticks to your feet. She’d spent too much of her life in rooms like that already.

“Why don’t you just look at this house?” CarolAnna Grey said.

Eric and Lacey got out of the Tahoe. “We could look,” Eric said.

Lacey looked. It was a square, no question. She dug in her purse for the bag of pistachios. In the last three months, besieged by morning sickness, she had gained ten pounds, though the baby itself was smaller than her thumb; she had to eat all the time, dry salty food, to keep the nausea under control. She wandered to the corner, seeking shade.

The neighborhood was exactly right. She loved the way the streets curved. She loved the cul-de-sacs and the big trees, the gardens all flashed with pink and white as the last dogwood flowers withered in June’s green heat. She loved the big lawns prettified with gazebos, fountains, swings, wishing wells. A flock of little boys on skateboards flurried through the next intersection. Their voices hung in the air behind them like a flight of bells. She could live here forever, in the right house.

Forrester Lane curved counterclockwise, an arc of lawns and trees. She poured the pistachio shells back into the bag and walked along the sidewalk. It was broken in places, shattered from below by the heaving roots of oaks and maples. She liked that. It showed that the people who lived here valued trees more than concrete. Here was shade, under the biggest maple she had ever seen, effortlessly shielding two houses at once.

She looked up suddenly, her eye drawn to some motion not quite seen, and there was the house. She looked at it and her heart turned, like a key in a lock. Her house: a Cape Cod, dusty rose, its face naked and bruised. The shutters were piled on the porch, a sheet of plywood sealed the upper-right dormer window, tire tracks rutted the lawn, and a blue Dumpster stood crooked on the grass, filled with rolls of brown carpet and green foam-pad. A rust-stained claw-foot bathtub lay upside down on the porch.

Eric came up behind her and touched her arm to pull her away. “Look,” she said. It spoke to her. Its brokenness and emptiness called her, and the discarded carpet was a mark of hope. This house had been someone’s home; it had suffered and been damaged, and it was ready to be a home again. “Look, this is our house,” Lacey said.

“You’re not looking.” She pointed to the house on the left. Also a Cape Cod, it gleamed immaculate in the shadow of the big maple. Its siding was a yellowed cream, the shade of egg custard, and the shutters were golden caramel. Three white rockers sat at friendly angles on the porch, under hanging ferns. Someone had mowed the lawn in perfect herringbones. “They’re just the same. It could look like that, if we took care of it.” She couldn’t turn her back on this house; there was something in its expression, the angle of the dormers, so quizzical and innocent and appealing. It
needed
her. “It’s just so cute.”

“Cute? Be serious. The down payment, it’s all the money we have.”

The porch steps were broken. Lacey got her left knee onto the porch and hauled herself up, ignoring Eric’s protests. The front door, scraped of its paint, swung open to her hand, and she walked in.

The entrance was surprisingly wide. To the left, an open arch led to the formal living room: two big windows and a gray marble fireplace. The floor was bare wood, with a sander standing in the middle. Lacey was glad the carpets were gone; they must have been horrible. To the right, another open arch, and a smaller room, with the same big windows. A roll of carpet stood in one corner, its underside stained in broad circles of brown and black. Straight ahead was the bright heart of the house, a staircase beautiful even under its mud-colored Berber. A porthole window, a quartered circle, shed yellow western light down into Lacey’s eyes. The last six steps broadened and curved out and back, with the lowest step describing a complete circle around the banister post.

Lacey could see her someday children there. They would sit on that round step in the sunshine. She saw a boy folding paper airplanes, which he meant to throw from a bedroom window. She saw a girl leaning against the post with her head bent over a book. The girl tucked a lock of hair behind her ear. She read as Eric did, biting her upper lip, her eyebrows tucked into a frown. The light hid their faces from her, but she already knew them. Someday, here. They had chosen their home in this house.

Eric took Lacey’s elbow and pulled her out of the house. “You can’t just walk into someone’s house,” he said. “You don’t even know if it’s for sale.”

Lacey let Eric help her off the porch, where CarolAnna Grey caught up with them. “This is the house I want.”

An Unexpected Start: A Prequel to An Unexpected Hunger by Rosa, C.
The Sons of Heaven by Kage Baker
The Devil's Game by Alex Strong
Heart of Glass by Jill Marie Landis
Last Seen in Massilia by Steven Saylor
Reckless & Ruined by Bethany-Kris
The Thief-Taker's Apprentice by Stephen Deas
Molding Clay by Ciana Stone
The Do Over by A. L. Zaun
Meltdown by Andy McNab