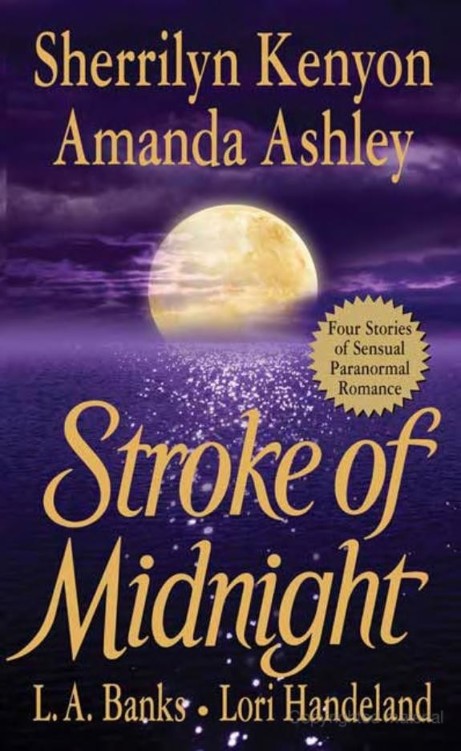 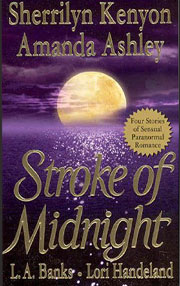 Born of the Night

In an unseen world that lurks in the

shadows, they roam the night—feral, passionate,

and dangerous. And when their world touches ours,

mortals powerless in its wake…

Four of romance's most intriguing authors have come together to create a mesmerizing anthology—unforgettable tales of vampires, shapeshifters, and werewolves. At the heart of these deeply sensual tales are everyday people facing extraordinary events—men and women thrown together by fate and an irresistible desire. In this world, your eyes can betray you as myth becomes reality, curses are vanquished, and love is the only weapon that can stand in the face of evil. In this world, there is a moment when passion and forbidden desire collide at the…

Two enemy Were-Panthers discover that fate has destined they become lovers. Pandora must learn to trust Dante's foreign nature. But as she slowly succumbs to the truest passion she has ever known, dark forces have already set out to reclaim her…

BORN OF THE NIGHT

When Lady Shanara Montiori is taken hostage, she learns that the rumors about her captor are true. Lord Reyes is afflicted with the dark curse of the werewolf. Still, Shanara can't fight the attraction they both feel. Will their love break the curse—or feed its powerful hold?

An innocent mistake forces the beautiful Tara onto a mission to save herself from the dark fate that awaits her. Salvation comes in the form of a seductive biker with a heart of gold. But will surrendering to their ripe attraction unleash a danger even she cannot control?

Excerpt from
Seize the Night
copyright © 2004 by Sherrilyn Kenyon.

Excerpt from
The Bitten
copyright © 2004 by Leslie Esdaile Banks.

The poem by Joseph Walsh on p. 83, preceding "Born of the Night," is used with the permission of the author.

It was hard to find an all-powerful, mythical being in a crowd of thirty thousand.

Or at least it was in theory.

At the yearly Dragon*Con science fiction convention in Atlanta, Georgia, however, it was another story entirely. There were two Yodas and a Dragon Rider from Pern checking in at the hotel's front desk while a full regiment of Storm Troopers walked by. There were gods and goddesses, all manner of aliens, warriors, and ladies gathered there. Pandora had even seen the Wicked Witch of the West cruise by on her motorized broomstick.

Since she'd sat down ten minutes ago, Pandora had counted nine Gandalfs, and if she didn't miss her guess, there were at least two dozen elves, fairies, ores, goblins, and assorted others gathered around, talking on cell phones, or smoking just outside the hotel doors.

And one mustn't forget the entire cabal of vampires and demons walking around handing out fliers for people to come to their room for a "blood party" and Buffy film fest.

Not to mention she'd already been invited twice to the Klingon Homeworld in Room 316 at the Hyatt Regency across the street. Meanwhile a group of supposedly androgynous Borg men had tried to "assimilate" her as soon as she entered the lobby of the Marriott Marquis.

This had to be the strangest gathering she'd ever seen, and when given the fact that she was a Were-Panther who up until three days ago had lived solely among her own preternatural kind, that said something.

"I'm never going to find him," she murmured to herself as an extremely tall, gorgeous Goth man stopped in front of her.

And he was the last thing she needed to be staring at, yet she couldn't seem to help herself. He was utterly compelling.

He wore a pair of dark sunglasses even inside the hotel while he scanned the motley crowd as if looking for someone. Something about the man commanded attention and respect. Of course, it didn't help that her hormones were currently elevated by the change going on inside her as she came into full womanhood. Her entire body was humming from hormonal overload which, up until his appearance, she'd been keeping under very careful control.

Now she sizzled for a taste of him and it was all she could do to stay seated.

He had to be at least seven feet tall, augmented by the flame biker boots that added at least three inches to his height. He had long black hair that flowed around his broad shoulders, and wore an old, faded motorcycle jacket with a skull and crossbones painted on the back. The worst part was that he wore
nothing
underneath that jacket and every time he moved, she glimpsed more of his tanned, ripped body.

His black leather pants hugged a perfect bottom that would rival any of her Were brethren. Every part of her wanted to stand up, cross the small distance between them, and pull his tall, lean body against hers until the vicious, needful hunger in her blood was fully sated. But even as she felt that primal sexual hunger, the animal part of herself sensed an air of lethal danger from him.

He wasn't the kind of man a woman approached without an invitation.

The man turned as a woman around his age came running up to him. Cute as she could be, she was dressed like a demon, complete with a set of black wings that looked spookily real as they twitched and flapped. Her skin was red and black, and her hair matched his. She even sported a pair of glowing red horns on her head. Her short purple skirt was flared and she wore a black leather bustier with three large silver buckles on the front. Black and purple striped leggings and a pair of six-inch platform combat boots completed her odd outfit.

The tall "demon" handed the man a credit card. "It's broke again,
akri
," she said, pouting around a pair of vampirelike fangs. "The man downstairs done said that the Simi can't charge nothing else until I'm not over my limit no more. I don't know what that means, but I don't like it. Fix it,
akri
, or else I might eat him. The Simi gots needs and I needs my plastic to work."

The man laughed as he took it from her and pulled out his wallet. He handed her three more credit cards.

The "demon" squealed in delight and pulled him into a hug. She put the credit cards into her coffin-shaped purse, then handed him a small shiny red nylon bag. "By the way, I boughts those for you before I broke my plastic. Since you don't got your real hornays, these are some fake ones to tide you over until we go home."

"Thanks, Sim," he said in an incredibly deep, evocative voice as he took the bag from her.

She smiled, kissed his cheek, then dashed off into the crowd with her wings flapping behind her.

The man looked at Pandora then and gave her a half-grin that could only be called wicked, and yet it seemed somehow knowing. He inclined his head to her, then headed off after the woman who'd just left him.

Every instinct in her body told her to follow him, but she didn't listen.

She was here to find the legendary Acheron Parthenopaeus—an ancient, immortal Atlantean her sister had hoped would help hide Pandora from those who were hunting her. Not chase after some hot, young human who looked stunning in leather.

Acheron was her last hope.

Unfortunately, neither she nor her sister had any idea what he looked like. All they knew was that he came to Dragon*Con every year with his daughter.

He was older than time and more powerful than any other of his kind. She scanned the older men in the crowd who were dressed as wizards, warriors, or other creatures, but none of them seemed to be particularly wise or powerful, nor were they with a daughter.

Just what would an eleven-thousand-year-old man look like anyway?

Sighing, Pandora stood up and went to the bannister so that she could look down to the lower levels of the hotel and scan the crowd.

He had to be here.

But where? How could she find anyone in this thronging mass of people… er, aliens.

Chewing her lip, she debated where to go look for him. Suddenly, a tall man in an elegant black suit caught her eye. He wasn't particularly old, probably in his mid-thirties, but she sensed an unmistakable air of power from him.

Maybe he was the mysterious Acheron. And he was heading for the bank of elevators.

Pandora rushed after him, and barely made it before the door closed them inside the small compartment with a Renaissance drummer, a green-fleshed alien, and Darth Vader.

But that wasn't what made her heart stop. As she glanced out through the glass wall of the elevator, she saw four things that terrified her.

It was a group of devastatingly gorgeous men. The two shortest of the group were identical in looks and they had to be at least six feet four. They all had jet-black hair and were dressed in black Goth clothes.

The four men stood in a specific formation that she knew all too well, with their backs to each other as they scanned the crowd hungrily, intently, as if seeking something in particular. They were fierce. Animalistic.

It was as if they had literally caught wind of something, and in one heartbeat she knew what that something was.

"Oh no," she said under her breath. By their build and beauty and actions, she would know their breed anywhere. No group of humans could be that handsome or that intense. Nor would any other species be so alerted by her scent.

They, like her, were Were-Panthers, and by the look of them, they were young and virile.

And she was in heat…