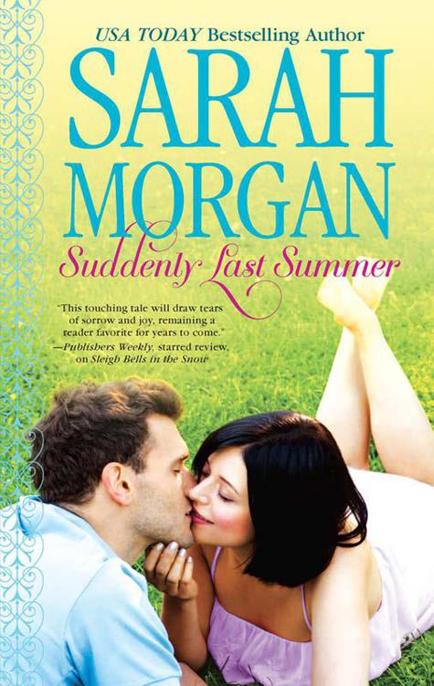 Fiery French chef Élise Philippe is having a seriously bad day. Not only have the grand opening plans for her beloved café fallen apart, but Sean O’Neil is back in town and looking more delectable than ever. Memories of the electrifying night they shared last summer leave Élise
very
tempted, but she knows all too well that eventually Sean will be leaving…again.

Being back in Vermont—even temporarily—is surgeon Sean O’Neil’s worst nightmare. Returning home to the Snow Crystal Resort means confronting the guilt he feels about rejecting his family’s lifestyle years ago. But discovering that Élise is still in Vermont and still sets his blood racing is a very welcome distraction! Remembering last summer and how good they were together is going to make walking away more difficult than he could imagine….

“This touching tale will draw tears of sorrow and joy, remaining a reader favorite for years to come.”
—
Publishers Weekly,
starred review

“
Sleigh Bells in the Snow
[is] a great wintery romance with plenty of chemistry and heart…Morgan has really shown her talent and infused so much love, both romantic and familial, into her characters that I am anxiously looking forward to what she writes in the future.”
—
All About Romance

“No one does the double-edged sword of the holidays like Sarah Morgan. She is able to capture the warmth and happiness, but she also remembers those for whom the season is bittersweet…”
—
Dear Author

“[Morgan] managed to really bring everything I love about holiday romances in general into one beautiful story full of fantastic characters, steamy chemistry, and Christmas spirit… I loved every page.”
—
Smexy Books

SLEIGH BELLS IN THE SNOW

(If you bought this book, you’re my favourite reader ever.)

They say the way to a man’s heart is through his stomach, so when fiery French chef Élise Bonnet meets super cool surgeon Sean O’Neil, there should be nothing standing in the way of true love. Except neither is interested in true love.

Like his two brothers, Sean grew up at the beautiful Snow Crystal Resort in Vermont but he couldn’t wait to get away, to pursue his career as a surgeon and enjoy life in a big city. Reluctant to make the sacrifices he believes come with a long-term relationship, he has stayed resolutely single. But when circumstances force him to return home, he finds himself confronting more than just his conflicted feelings about his family.

Writing this story was so much fun. I loved bringing together two characters determined to stay apart, and I loved writing about Snow Crystal in the summer. It also made me hungry because I was forced to spend hours drooling over Vermont cookery books (and quite a few bottles of Pinot Noir just might have been harmed during the research process, but we won’t talk about that). Unfortunately writing leaves me little or no time to shop, so sadly the chances of finding a delicious, freshly baked loaf of rosemary and sea salt bread in my kitchen are about as likely as opening my front door to find Henry Cavill standing there wearing nothing but a towel (Wait! Is that the doorbell…?).

Suddenly Last Summer
is the second book in my O’Neil Brothers series, but you don’t have to have read the first one for it to make sense (but just in case you want to, it’s called
Sleigh Bells in the Snow
).

I’m thrilled you decided to pick up this story. I hope you enjoy it, and if you feel like letting me know your thoughts then the best way to get in touch is to send me an email via my website or find me on Twitter,
@SarahMorgan_
(don’t forget the underscore), or
www.Facebook.com/AuthorSarahMorgan
.

Have a happy summer!

To Flo. Behind every happy author is a brilliant editor. I’m so lucky to have you.

Sean rolled his shoulders to ease the tension, his mind still in the operating room.

His patient was a promising soccer player. He’d torn the anterior cruciate ligament in his left knee, a common enough injury that had ended plenty of sports careers. Sean was determined it wasn’t going to end this one. The procedure had gone well, although surgery was only the beginning. What followed would be a lengthy rehabilitation that would require dedication and determination from all involved.

Still thinking about how to manage expectations, he took the phone from the nurse. “Sean O’Neil.”

“Sean? Where the hell were you last night?”

Braced for a different conversation, Sean frowned with irritation. “Veronica? You shouldn’t be calling me here. I was told this was an emergency.”

“It
is
an emergency!” Her voice rose along with her temper. “Next time you invite me to dinner, have the decency to show up.”

A nurse came out of the operating room and handed him a form.

“Veronica, I’m sorry.” He tucked the phone between his cheek and his shoulder and gestured for a pen. “I was called back to the hospital. A colleague had problems with a patient. I was operating.”

“And you couldn’t have called me? I waited in that restaurant for an hour. An hour, Sean! A man tried to pick me up.”

Sean signed the form. “Was he nice?”

“
Do not joke about it.
It was the most embarrassing hour of my life. Don’t ever,
ever
do that to me again.”

He handed the form back to the nurse with a brief smile. “You’d rather I left a patient to bleed to death?”

“I’d rather you honored your commitments.”

“I’m a surgeon. My first commitment is to my patients.”

“So what you’re saying is that if you had to choose between me and work, you’d pick work?”

“Yes.” The fact that she’d asked that question showed how little she knew him. “That is what I’m saying.”

“Damn you, Sean. I hate you.” But there was a wobble in her voice. “Tell me honestly, is it just me or is it all women?”

“It’s me. I’m bad at relationships, you know that. Right now my focus is my career.”

“One of these days you’re going to wake up alone in that fancy apartment of yours and regret all the time you spent working.”

He decided not to point out that he woke up alone through choice. He never invited women back to his apartment. He was barely ever there himself. “My work is important to me. You knew that when you met me.”

“No, important is being dedicated to what you do but still having a personal life. What work is to you, Sean O’Neil, is an obsession. You are single-minded and focused to the exclusion of everything else. That might make you a brilliant doctor but it makes you a lousy date. And here’s a news flash—being charming and good in bed doesn’t stop you being a selfish, workaholic bastard.”

“Sean?” Another nurse appeared at his elbow, her pink cheeks and awkward demeanor suggesting she’d overheard that last sentence. “The team coach is waiting outside for news along with the boy’s parents. Will you talk to them?”

“Are you even listening to me?” Veronica’s voice came down the phone, shrill and irritated. “Are you having another conversation while you’re talking to me?”

Sean closed his eyes. “I’ve just come out of the operating room.” He rubbed his fingers over his forehead. “I need to speak to the relatives.”

“They can wait five minutes!”

“They’re worried. If that was your kid in recovery, you’d want to know what was going on. I have to go. Goodbye, Veronica. I really
am
sorry about last night.”

“No, wait! Don’t go!” Her voice was urgent. “I love you, Sean. I really love you. Despite everything, I think we have something special. We can make this work. You just need to flex a little bit more.”

Sweat pricked at the back of his neck. He saw the nurse’s eyes widen.

How had he got himself in this situation?

For the first time in years he’d made a misjudgment. He’d thought Veronica was the sort of woman who was happy to live in the moment. Turned out he was wrong about that.

“All right,
I’ll
flex. I’m sorry, I’m being a shrew. Let me cook you dinner tonight, I promise I won’t complain if you’re late. You can show up whenever. I’ll—”

“Veronica—” he cut across her “—do
not
apologize to me when I’m the one who should be apologizing to you. You need to find a guy who will give you the attention you deserve.”

There was a tense silence. “Are you saying it’s over?”

As far as Sean was concerned it had never started. “Yeah, that’s what I’m saying. There are hundreds of guys out there only too willing to flex. Go and find one of them.” He hung up, aware that the nurse was still watching him.

He was so tired he couldn’t even remember her name.

Ann? No, that wasn’t right.

Angela. Yes, it was Angela.

Fatigue descended like a gray fog, slowing his thinking. He needed sleep.

He’d been called to an emergency in the night and had been on his feet operating since dawn. Soon the adrenaline would fade and when it did he knew he was going to crash big-time. Sean wanted to be somewhere near his bed when that happened. He had the use of a room at the hospital but he preferred to make it back to his waterside apartment where he could nurse a beer and watch life on the water.

“Dr. O’Neil? Sean? I’m so sorry. I wouldn’t have put the call through if I’d known it was personal. She said she was a doctor.” The look in her eyes told him she’d have no objection to being Veronica’s replacement. Sean didn’t think she’d be flattered to know he’d temporarily forgotten her existence.

“Not your fault. I’ll talk to the relatives—” He was tempted to take a shower first, but then he remembered the white face of the boy’s mother when she’d arrived at the hospital and decided the shower could wait. “I’ll go and see them now.”