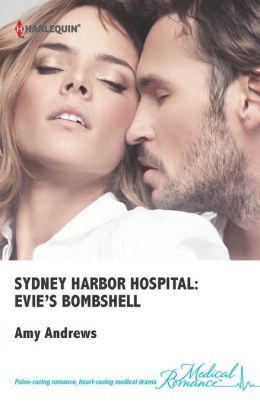 ‘Whether Amy Andrews is an auto-buy for you, or a new-to-you author, this book is definitely worth reading.’
—Pink Heart Society Book Reviews
on
A MOTHER FOR MATILDA

Amy also won a RB*Y
(Romantic Book of the Year) Award in 2010 for
A DOCTOR, A NURSE, A CHRISTMAS BABY!

This book is dedicated to all the loyal Medical Romance™ fans who always look for our books and love a good series!

Ever since the
Sydney Harbour Hospital
series hit the shelves readers have been asking for Finn and Evie’s story. And I can’t blame them, because I have to admit to more than a passing fascination myself as I wrote their sub-plot in Mia and Luca’s story. But I just kept thinking: There’s no way Finn can be redeemed—it’ll never be done. I pity the one they ask to do that.

And then they asked me to do it … gulp!

But in all honesty I was ecstatic to be chosen, because I’d already written a prequel for Finn and Evie quite a few months prior—their very first meeting—so I’ve been invested in their HEA for a while and I do so like a challenge …

But how do you redeem a man who’s as emotionally shut down as Finn? Evie’s been trying for years to reach him with no success. Well, it wasn’t easy. I had to strip him right back and throw a huge curve ball at him, and then have the one person he’s always counted on subconsciously to be there, despite his perennial bad mood, walk away.

Yep, Finn was a tough one—but Evie was tougher. She refused to take his scraps, demanding all of Finn. Demanding the fairytale. Refusing anything less.

And she got it too.

I hope you enjoy their journey to Happy-Ever-After-land.

EVIE LOCKHEART BELTED hard on the door, uncaring if the whole building heard her. Loud rock music bled out from around the frame so she knew he wasn’t asleep. ‘Open up now, Finn Kennedy,’ she yelled, ‘or so help me I’m going to kick this fancy penthouse door right in!’

She glared at the stubbornly closed object. It had been two weeks since he’d been discharged from hospital after the less than stellar success of his second operation. Two weeks since he’d said,
Get out. I don’t want you in my life
. Two weeks of phoning and texting and having one-sided conversations through his door.

And it was enough.

She was sick of Finn shutting her out—shutting the world out.

And if she didn’t love him so much she’d just walk away and leave him to rot in the cloud of misery and denial he liked to call home.

But memories of the infection he’d picked up after his first operation and the state he’d got himself into as he’d tried to self-treat were never far from her mind and she was determined to check on him whether the stubborn fool wanted her to or not.

She was about to bash on the door again when the lift behind her dinged and Gladys stepped out. She’d never been happier to see Finn’s cleaner in her life.

The older woman’s brow crinkled in concern as she searched through her bag. ‘Is he all right? Is he sick again?’

‘No,’ Evie dismissed. Gladys had found Finn collapsed on the floor overwhelmed by his infection and still hadn’t quite got over the shock. ‘He’s probably fine but I’d like to see it with my own two eyes.’
Then I’m going to wring his neck
.

Gladys stopped her frantic search. ‘He was fine yesterday,’ she hedged.

Evie had to stop herself from knocking the dear sweet little old lady, who also happened to clean her apartment along with many others at
Kirribilli Views
, to the ground and forcibly searching her bag.

Gladys looked embarrassed. ‘I’m sorry, Evie. But he was very firm about it.’

Evie suppressed a scream but she stood her ground and held out her hand. ‘Gladys, I’m begging you, one woman to another, I need to see him. I need the key.’

Gladys pursed her lips. ‘You love him?’

Evie wasn’t surprised that Gladys was in the gossip loop, given how long rumours about she and Finn had been floating around Sydney Harbour Hospital and how many of its staff lived at Kirribilli Views. She nodded, depending on the incurably romantic streak she knew beat inside the old cleaner’s chest.

‘Yes.’ Although God knew why.
The man was impossible to love!

Gladys put her hand in her bag and pulled out a set of keys. ‘He needs someone to love him,’ she said, holding them out.

Gladys grinned. ‘That too.’

‘I’ll leave his apartment till last today,’ the elderly woman said, and turned back towards the lift.

Finn glared at her as the door opened and Evie felt the glacial chill from his ice-blue eyes all the way across the room, despite the darkened interior from the pulled-down blinds. ‘Remind me to sack Gladys,’ he said as he threw back the amber contents of a glass tumbler.

Evie moved towards where he was sitting on the couch, noticing how haggard he was looking. His usual leanness looked almost gaunt in the shadows. His regular stubbly appearance bordering on scruffy. His dark brown hair messy as if he’d been constantly worrying at it with agitated fingers. The light was too low to see the streaks of grey that gave him that distinguished arrogant air he wore so bloody well.

How could a man look like hell and still cause a pull low and deep inside her? And how,
damn it all
, could he stare at her with that morose belligerence he’d perfected and still not kill off her feelings for him?

Finn Kennedy was going to be the death of her. God knew, he’d already ground her pride into the dust.

The coffee table halted her progress and she was pleased for the barrier as the urge to shake him took hold. ‘You’re drunk.’

‘Nope.’ He poured himself another finger of Scotch from the bottle on the coffee table. ‘Not yet.’

‘It’s three o’clock in the afternoon.’

He raised his glass to her. ‘I appreciate this booty call, but if you don’t mind I have a date with my whisky glass.’

Evie watched him throw it back, despairing how she could get through to him. ‘Don’t do this to yourself, Finn. It’s early days yet.’ She looked down at his right arm, his lifeless hand placed awkwardly on his thigh. ‘You need to give it time. Wait for the swelling to subside. Rupert’s confident it’ll only be temporary. You’ll be back operating again before you know it’

Finn slammed his glass down on the table. ‘Go away, Evie,’ he snapped.

Evie jumped but refused to be cowed. He’d been practically yelling at her and telling her to go away for their entire relationship—such as it was. But there’d been other times—tender moments, passionate moments—and that was the real Finn she knew was hidden beneath all his grouchy, arrogant bluster.

She understood why he was pushing her away. Knew that he didn’t want to burden her with a man who would be forever less in his eyes because he might not ever again be the one thing that defined him—a surgeon.

But surely that was her choice?

‘No. I love you and I’m not going anywhere.’

Evie came around to his side of the table until she was standing right in front of him. ‘Well, you don’t always get what you want in life Finn—
not even you
.’ She shoved her hands on her hips. ‘If you want me to leave then you’re going to have to get your butt off that lounge and make me.’

She endured a deliberately insulting look that raked over her body as if she was sitting in a window in Amsterdam.

Evie had just come from lunch with her sisters and as such was dressed in a pencil skirt that came to just above her knee and a satiny blouse that buttoned up the front and fell gently against her breasts. Her hair was loose and fell around her shoulders.

She ignored him. She would not let his deliberate insults deter her from her goal. ‘Let me help you, Finn. Please.’

His good hand snaked out and snagged her wrist. He yanked and she toppled forward, her skirt pulling tight around her thighs as she landed straddling his lap, grabbing at his shoulders for stability.

‘Is this what you wanted?’ he demanded. ‘You want to see how I do this with one hand?’ He groped a breast. ‘Or this?’ he persisted, letting his hand slide down to where her skirt had ridden up, pushing his hand up beneath the fabric, gliding it up her thigh, taking the fabric with him until it was rucked up around her hips and her legs were totally exposed, his hand coming to rest on the curve of one cheek.

Evie felt the drag of desire leaden in her belly as she fought against the seductive allure of her erect nipples and the quivering flesh in his palm. The heat in his gaze burnt into her with all the sear factor of a laser.

‘You want to help me feel like a man again?’ he sneered, his breath fanning her face. ‘You want to take a ride on the one thing I have that
is
fully functional? You want to
screw
, Evie?’

Evie steeled herself against his deliberately crude taunts. He was lashing out. But she wasn’t going to respond with the venom his remark deserved.

Because that’s what he wanted.

‘I just want to love you, Finn,’ she said quietly, refusing to break eye contact even though she knew he was trying to goad her into it. Her pulse roared in her ears and her breath sounded all husky and raw. ‘Let me love you.’

Evie watched as all the fight went out of him. His hand dropped from her bottom and then he looked away. ‘I can’t even touch you properly, Evie.’

She grabbed his face and forced him to look at her, his stubble almost soft now it was so long—more spiky than prickly. ‘You have this,’ she said, her thumb running over the contours of his mouth. ‘Which, when it isn’t being vicious and cruel, can melt me into a puddle.’

She grabbed his left hand with her right hand and brought it up to her breast. ‘And this,’ she said, her nipple beading instantly. ‘Which knows its way around a woman’s body as well as the other.’

Evie saw his pupils dilate as he dropped his gaze to look at his hand on her breast. He stroked his thumb across the aching tip and she shut her eyes briefly.

‘And,’ she said, dragging herself back from the completely wanton urge to arch her back, ‘this.’ She tucked her pelvis in snugly against his and rubbed herself against the hard ridge of his arousal.

She put her hands between them and her fingers felt for his button and fly and in that instant Finn stopped wrestling his demons. His mouth lunged for hers, latching on and greedily slaking his thirst as his good hand pulled at her blouse then yanked, popping the buttons.

Evie’s eyes practically rolled back into her head and there was no coherent thought as she mindlessly palmed the length of him and cried out at the delicious graze of his teeth against her nipple.