Take Six Girls: The Lives of the Mitford Sisters 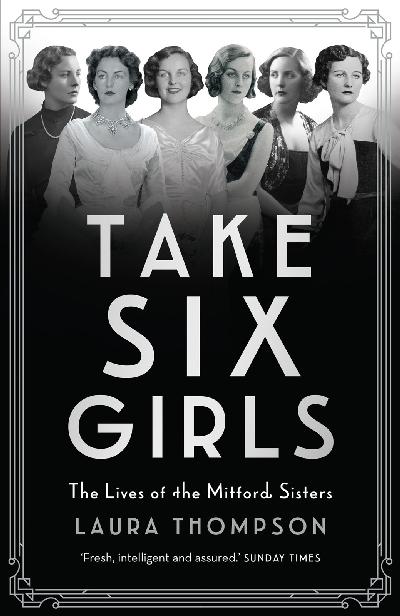 Take Six Girls: The Lives of the Mitford Sisters

The eldest was a razor-sharp novelist of upper-class manners; the second was loved by John Betjeman; the third was a fascist who married Oswald Mosley; the fourth idolized Hitler and shot herself in the head when Britain declared war on Germany; the fifth was a member of the American Communist Party; the sixth became Duchess of Devonshire. They were the Mitford sisters: Nancy, Pamela, Diana, Unity, Jessica and Deborah. Born into country-house privilege in the early years of the 20th century, they became prominent as 'bright young things' in the high society of interwar London. Then, as the shadows crept over 1930s Europe, the stark and very public differences in their outlooks came to symbolize the political polarities of a dangerous decade. The intertwined stories of their stylish and scandalous lives recounted in masterly fashion by Laura Thompson hold up a revelatory mirror to upper-class English life before and after WWII. 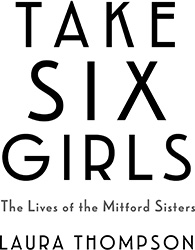 To Louis, the well-beloved 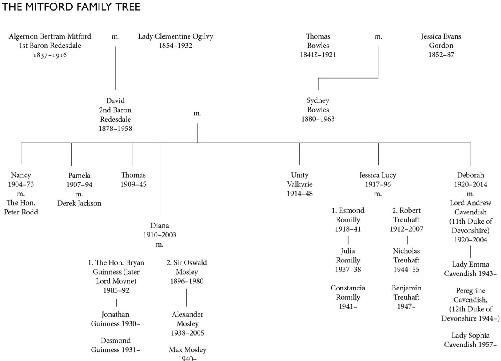 Take six girls, all of them rampant individualists, and let them loose upon one of the most politically explosive periods in history. That is the story of the Mitfords. It is like a social experiment, the results of which would have staggered even the most imaginative scientist, and no small part of its fascination lies in the fact that the experiment can never be repeated. Never again will there be six such girls, raised in such a way, at such a time.

The Mitford sisters were born in the heart of England, between 1904 and 1920, into a family of pre-Conquest antiquity. Daughters of the 2nd Lord and Lady Redesdale, they were expected to become wives, mothers, propagators of their class, the kind of women who appeared at state balls in slightly ill-fitting satin and tramped through Gloucestershire in good tweed. Something of this steadfast upbringing always remained with them: Nancy Mitford confessed on her deathbed that she would give anything for one more day’s hunting. But a world beyond the Heythrop had long since claimed Nancy, and indeed all the girls except Pamela – the shadowy exception who threw the rest into even more powerful light.

One can chant the careers of the Mitford sisters in the manner of Henry VIII’s wives, thus: Writer; Countrywoman; Fascist; Nazi; Communist; Duchess. One can recite the mini-biographies, pulling out extraordinary facts with the practised ease of a conjuror. Nancy, an auto-didact who never learned to punctuate (Evelyn Waugh: ‘it is not your subject’), became a star author whose 1940s novels
The Pursuit of Love
and
Love in a Cold Climate
are deeply loved popular classics. Pamela, the bucolic chicken-breeder whose blue eyes matched her Rayburn, was adored by the young John Betjeman (‘Gentle Pamela, most rural of them all’). Diana, the greatest beauty of her generation, calmly put herself beyond the social pale when she left her perfect husband for the leader of the British Union of Fascists, Sir Oswald Mosley. Unity, conceived in a Canadian town called Swastika, became a fervent Nazi and the close companion of Adolf Hitler. Jessica eloped with her fellow Communist, Esmond Romilly, the nephew (and rumoured son) of Winston Churchill, and proudly set up home among the working classes of Rotherhithe. Deborah became chatelaine of Chatsworth House, the magnificent seventeenth-century seat of the Devonshire family, where she filled her office with Elvis Presley memorabilia.

All this poured out in a great torrent of newsprint when Deborah – ‘the Last Mitford Girl’ – died in 2014, although the facts were already familiar. Some people may have thought that Nancy was the Fascist and Unity the Communist, but they pretty much had the basic idea. Equally familiar was the collective aspect of the sisters: their irrepressible aristocratic levity, their variations-on-a-theme faces, their idiom. The Mitfords inhabited a linguistic microclimate, whose almost nursery way of speech (‘oh do be sorry for me’) is famous above all for the nicknames they gave to everybody, especially to each other, which began as a private joke and were later displayed for public consumption. Again, people may have sometimes got things confused and thought that Woman was the Nazi and Honks the Writer, or that Stubby was the Countrywoman and Bobo the Duchess;
1
nevertheless there was an awareness that this was how the Mitfords went on. They all met Hitler and they all called him Hitty or Herr Housepainter. Or something like that.

Some years before she died I interviewed the then Duchess of Devonshire, or Debo, as she was always known (although Nancy – have you heard this one? – called her ‘Nine’, after her alleged mental age). She admitted to a brisk bafflement with the whole Mitford industry. ‘As for people being interested in all of us now – that’s just amazing. But they seem to be, for some reason best known to themselves.’ Her sister Diana Mosley (Honks, Bodley, Cord, Nardie), whom I also met, came more sharply to the point. ‘The Mitford family has become a frightful bore,’ she said, laughing her still-beautiful head off in a very Mitford way (almost silently, as if the mirth were too great for verbal expression). ‘It bores us to death!’

Of course one might now say much the same about Henry VIII’s wives. Oh God, no, not the one about Anne of Cleves’s painting by Holbein. Who doesn’t know that one?

Nonetheless, familiarity is undoubtedly an issue with the Mitford story. The life of Unity Mitford should be the subject of an opera, yet it has become more like the punchline to a sick joke – ‘And then war was declared and she shot herself!’– than the astonishing, murky tragedy that it was. For familiarity does not merely induce boredom. It deadens significance. And the sisters
were
significant; still are, as a matter of fact. Those who long to rip apart the twee latticework of Mitfordiana – Farve, Muv, Hons’ Cupboards
2
– may think otherwise, and I can quite see why, but at the same time I would say: look afresh at the familiar and consider. These girls are prize exhibits in a Museum of Englishness. What they represent is complex, although their image has a divine simplicity. And whatever one’s opinion of what they represent, it is impossible, in truth, to find them boring.

As I say, the phenomenon of the Mitford sisters is unrepeatable. The nature of the girls, the nature of the world at that time: such a configuration can never happen again.

In the first place there is the simple fact that the Redesdales had so many children, seven in all (Tom, the only son, born in 1909, is generally overlooked, but his personality was at least as strong and intriguing as that of his sisters). Then there is their upbringing. Although Tom went to Eton, the girls were educated mostly at home, and the three large country houses that the family inhabited – Batsford Park, Asthall Manor, Swinbrook House – became their imaginative playgrounds. The well-raised modern child has its every moment accounted for (oboe at 4, gluten allergy test at 4.30) and accompanies its parents into almost every adult arena, from saloon bar to Starbucks. The Mitford girls, conversely, lived in a world of their own. They had a freedom that today would seem almost feral. In a literal sense it was limited: they travelled nowhere beyond Scotland, nowhere without Nanny, and they talked to few people outside the family except grooms, governesses and gamekeepers. Their mother could be rigid in outlook, their father would create sudden violent storms about infringements of the behavioural code. Yet in a more profound sense the girls’ freedom was near absolute, because nothing really prevented them from indulging their essential natures. How far this was a good thing is open to question, of course. But it made them the Mitfords.

They roamed around their homes, obsessing over books or love or animals (never a photograph without a wonderful dog in it), growing ever more beautiful and hungrier for life, experiencing the perverse stimulation of extreme boredom. They were not all together, all the time. They formed particular alliances: Diana and Tom, Jessica and Unity, Deborah and Jessica. Not least because of age differences, the sisters did not operate as a sextet (with Tom as semi-detached musical director). Nevertheless, and partly because there was nobody else freely available, they sparked off each other like tinder sticks. Competitive family hierarchies were set in place that would last all their lives. Right up to the end, when only Diana and Deborah were left, the Mitford girls remained intertwined in a network of rivalries and alliances.

And indeed, their startling – one might even say theatrical – individuality was all part of that complex, six-ply weave. It sounds facile in the extreme to say that Jessica became a rabid Communist because Unity, the sister to whom she was closest, became a rabid Nazi. It sounds equally glib to say that Unity became a Nazi because Diana – whom she admired and adored – became a Fascist. Yet to some extent these statements are true. Had these girls not grown up in such proximity, competing with or retreating from each other in a constant battling rhythm, they would not have become quite so singular. And had they not lived in such singular times, their individuality would – in some cases at least – have been expressed quite differently.

FIRST ONE DOWN: A Paul Sutton Novel by R.J. Belle
Mountain Rampage by Graham, Scott
Her Dragon Hero by Angela Castle
La Promesse (The Promise) by Xio Nin
Tamlyn by James Moloney
No acaba la noche by Cristina Fallarás
Memento mori by César Pérez Gellida
The Sagas of the Icelanders by Smilely, Jane
Thirty-Two and a Half Complications by Denise Grover Swank
All the Way Home and All the Night Through by Ted Lewis