Read The Affair of the Porcelain Dog Online 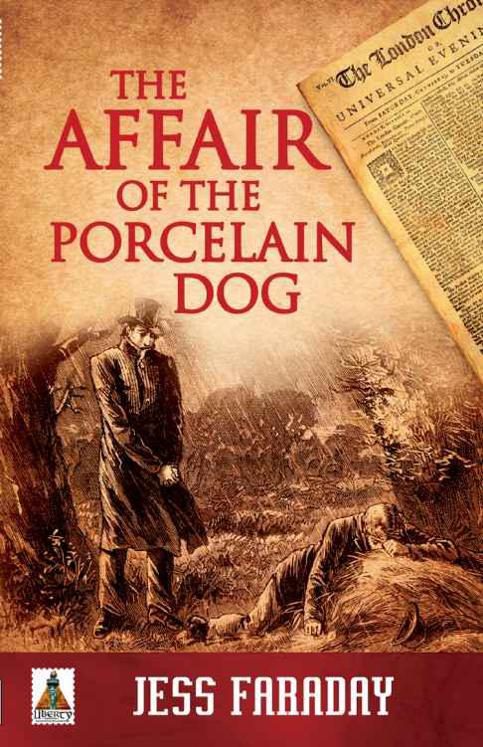 For Ira Adler, former rent-boy and present plaything of crime lord Cain Goddard, stealing back the statue from Goddard's blackmailer should have been a doddle. But inside the statue is evidence that could put Goddard away for a long time under the sodomy laws, and everyone's after it, including Ira's bitter ex, Dr. Timothy Lazarus. No sooner does Ira have the porcelain dog in his hot little hands, than he loses it to a nimble-fingered prostitute.

As Ira's search for the dog drags him back to the mean East End streets where he grew up, he discovers secrets about his own past, and about Goddard's present business dealings, which make him question everything he thought he knew. An old friend turns up dead, and an old enemy proves himself a friend. Goddard is pressing Ira for a commitment, but every new discovery casts doubt on whether Ira can, in good conscience, remain with him.

In the end, Ira must choose between his hard-won life of luxury and standing against a grievous wrong.

This is a work of fiction. Names, characters, places, and incidents are the product of the author's imagination or are used fictitiously. Any resemblance to actual persons, living or dead, business establishments, events, or locales is entirely coincidental.

Roy, who took my scribbling seriously, even when I had my doubts,

Helen, whose work-sharing scheme made authors of us both,

My writing group: Crystal, Heidi, Helen, Jen, Kam Oi Lee, N.J., and Wendy, for suffering through four drafts and always managing to come up with new and helpful observations,

And my editor, Greg Herren, who helped make this manuscript the best it could possibly be.

Wednesday's letter arrived in the evening post--a brief but pointed threat scrawled across ordinary white stationery in a startling lavender ink. But Goddard hadn't filed this one neatly behind the gilded cigarette box on the mantel with its predecessors. Instead, he had cast it down like a gauntlet onto the table between our twin armchairs. Hours later it remained like an uninvited guest.

"'I know what you are.'" Goddard picked it up and read aloud. "'Soon, the police will know as well. Unless.'"

Not that it mattered. Cain Goddard, a.k.a. the Duke of Dorset Street, did not negotiate with blackmailers. At that moment, his entire network of spies, cracksmen, bludgers, urchins and whores was scouring London in search of the person who dared threaten a criminal of his stature. When they found him, his skin wouldn't be worth a farthing. But what if they didn't find him? I imagined being led away in shackles, never again to put my feet up on the mahogany desk before the window, run my fingers over the leather-bound volumes lining the walls, or drape myself across the olive-colored velvet divan where Goddard had taken my hand and asked me to stay. At that time, I swore I would never return to Whitechapel. But even Whitechapel would be preferable to prison--and prison it would surely be, should the police learn the nature of Goddard's and my domestic arrangement.

The grandfather clock in the vestibule struck eleven. Goddard fingered his mustache thoughtfully, then shrugged.

"To convict us of criminal sodomy, dear boy," he said, patting my cheek on his way to the drink cart, "would require evidence that simply does not exist. Whisky?"

I relaxed as the liquor burned its way toward my stomach. We'd been discreet. Only Goddard's manservant had any inkling I was anything but a confidential secretary. Though the man had never liked me, Goddard paid too well for him to go telling tales.

"To convict me, on the other hand," he continued.

How he could laugh when the cold fingers of panic were reaching for my throat was anyone's guess. Thus far, no one outside of Goddard's tight
coterie
connected Dr. Cain Goddard, the self-effacing night lecturer at King's College, with the hated, feared Duke of Dorset Street. But once the police had him for buggery, it would all come out. Even if I did manage to slip away into the night, I'd be back on the streets--two years older, broke, and far too spoilt to go back to selling my arse.

"Ah, the mistakes of youth," Goddard said. "I'd hoped it wouldn't come to this, but now that it has, how fortunate I am to have a nimble-fingered young protege to set things right."

He glanced at me over the cut crystal glasses.

"Come, now. I need you, Ira. Not to warm my bed this time or run messages on the wrong side of town. I need you to retrieve something for me, something I'd feared lost, but which has now been found. My freedom, and, I daresay yours, depends on it. Can I depend on you?"

I looked around our beloved morning room. The armchairs in front of the fireplace, the rack of expensive, unused rifles over the doorway, the dearth of gewgaws and knick-knacks with which most people felt the need to litter their living spaces--after two years ensconced in this unspeakable luxury, how could I go back to doorways and doss-houses?

"Excellent. My carriage is waiting outside. The driver will take you to a pawnshop on Dorset Street, where you will find a black porcelain hound of unusual repugnancy. Bring it back, and our blackmailer won't have a wooden leg to stand on."

I laughed. A simple burglary in my home territory. With my talent for locks, it would be easy. Goddard smiled. It was a rare expression, but it transformed his purposefully bland face into something beautiful.

"Do this, and you'll have roast beef and Islay malt for breakfast, lunch, and dinner for the rest of your days, and all the books of Greek art your delicate arms can carry."

The tightening in my chest eased. It's sad how easily I can be convinced. But being a mere two years off the streets, the simple promise of even these small luxuries was enough to fortify me for the task.

"But who's sending the letters?" I called as he stepped out into the vestibule to fetch my coat. "What does he want?"

What he came back with was not my coat, but he draped it around my shoulders anyway.

"Never mind that, dear boy," he said, buttoning the ratty tweed across my chest. "Just get the dog."

In addition to its shabby condition, the so-called coat was much too large and stank of another man's tobacco. Moreover, it was July and anything heavier than linen was going to be hotter than hell. Goddard liked to dress me up sometimes, but never in secondhand rubbish ten years out of fashion.

And never in tweed.

Ignoring me, Goddard tucked his Trinity scarf beneath the collar and the lavender letter into my trouser pocket with a satisfied nod.

"The pockets are deep and have more give than a whore's bedsprings. Besides," he said with a smirk, "it'll make you look like Andrew St. Andrews."

That meddling popinjay of a detective had never rolled up his sleeves to pick a lock, or hiked up his coat-hems to keep from tripping across a doorstep. Being the third son of an earl, he'd never had the need to burgle. And if he were to do it for kicks, he'd no doubt commission a special garment for the adventure.

The question at the front of my mind, though, was why Goddard would compare me at all to someone he so loathed. The question was answered by Goddard's teasing chuckle.

Goddard patted my arse, slipping my silver flask into the pocket of the coat. There was a faint tinkle as the flask hit bottom. He'd even remembered my picklocks.

"Remember," he said. "A porcelain dog, half as long as your forearm, black as sin and twice as ugly. Now go."

With a sniff, I swept the horrible thing around me. Then, feeling a bit ashamed--it was an easy job, after all, and most of the time, Goddard didn't ask much of me--I pecked him on the cheek. When the carriage pulled away from the big house on York Street with me inside, Goddard was still standing in the doorway, running his fingers thoughtfully over his jaw, a little smile pulling at the edges of his lips.

What self-respecting housebreaker sets off wearing a Trinity scarf, you might ask? Blame Goddard's sentimental streak. He had taught at Cambridge once, and though he refused to talk about the experience itself or the circumstances of his dismissal, the scarf meant a great deal to him. You might also wonder what sort of imbecile takes a shiny private hansom to the building he intends to burgle. A necessity, I'm afraid, unless he intends to walk. The pawnshop stood nearly five miles away in Miller's Court, and no cabbie in his right mind ventured down that wicked quarter mile after dark. The streets were deserted, and the weather was clear. Not half an hour later, we had left the red brick houses and well-tended gardens of York Street behind, and the rubbish-strewn East End closed around us in a cocoon of filth and desperation.

I instructed the driver to let me out in front of the Blue Coat Boy pub, two blocks removed from my destination. An excited throng had gathered around the entrance--another fight, no doubt--and I was able to pass by unnoticed. Closer to the shop, jolly old Do-As-You-Please Street, possibly the most lawless quarter mile in London, was quiet. I strode up to the front door as if I owned the place--the only way to break into a building in plain sight--slipping my picklocks into my hand. Seconds later, I nudged the door shut behind me. Silence descended, and I relaxed, knowing I'd be able to go about my work in peace.