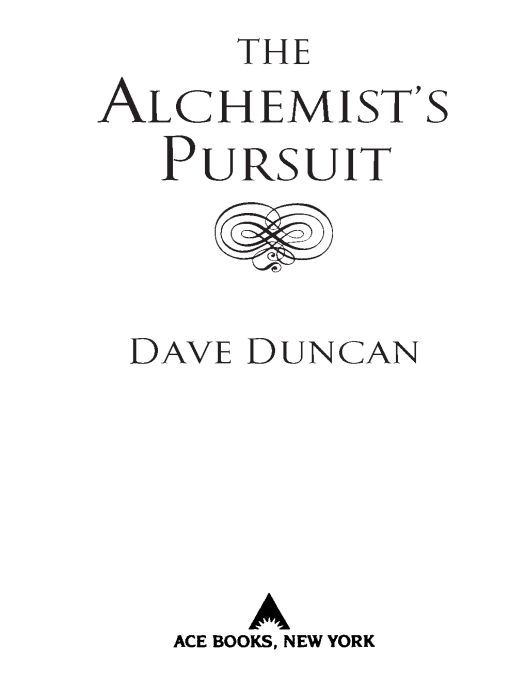 Table of Contents
Title Page
Copyright Page
Â
Chapter 1
Chapter 2
Chapter 3
Chapter 4
Chapter 5
Chapter 6
Chapter 7
Chapter 8
Chapter 9
Chapter 10
Chapter 11
Chapter 12
Chapter 13
Chapter 14
Chapter 15
Chapter 16
Chapter 17
Chapter 18
Chapter 19
Chapter 20
Chapter 21
Chapter 22
Chapter 23
Chapter 24
Chapter 25
Chapter 26
Chapter 27
Chapter 28
Chapter 29
Chapter 30
Chapter 31
Chapter 32
Chapter 33
Â
Acknowledgements
GLOSSARY
PRAISE FOR The Alchemist's CODE
“The even more intriguing sequel to
The Alchemist's Apprentice
(2007) is a mystery solved by the clairvoyant and sage Nostradamus and his apprentice, Alfeo Zeno . . . Duncan's alternate late-Renaissance Venice is wonderfully drawn and quite believable.”â
Booklist
PRAISE FOR
The Alchemist's APPRENTICE
“Brimming with wit and low-key charms; neither aficionados nor newcomers will be disappointed.”
â
Kirkus Reviews
(starred review)
“The occult is a grace note in this cynical whodunit, juicy with period detail.”â
Entertainment Weekly
“This book is fun . . . There's humor and adventure, mystery and magic, all rolled up in one package . . .
The Alchemist's Apprentice
can be enjoyed by both mystery lovers and fantasy fans.”â
SFRevu
“Duncan mingles arch fantasy and a whodunit plot in this alternate version of old Venice . . . Nostradamus and Alfeo's adventures provide more amusement than chills in this charming farce, which comments lightly on class prejudice, political chicanery, and occult tomfoolery.”â
Publishers Weekly
“Dave Duncan's wit shows a distinctive intelligence, a clear-eyed vision that's both irreverent and astute.”â
Locus
“Duncan's latest novel launches a new series set in an alternate Venice and filled with the author's customary touches of humor, light satire, and fast-paced action. [Duncan] shows his mastery of both storytelling and character building.”
â
Library Journal
Acclaim FOR DAVE Duncan
AND his PREVIOUS WORK
“Dave Duncan knows how to spin a ripping good yarn.”
âSF
Reviews.net
Â
“Duncan is an exceedingly finished stylist and a master of world building and characterizations.”â
Booklist
Â
“Dave Duncan is one of the best writers in the fantasy world today. His writing is clear, vibrant, and full of energy. His action scenes are breathtaking, and his skill at characterization is excellent.”â
Writers Write
Â
“Duncan excels at old-fashioned swashbuckling fantasy, maintaining a delicate balance between breathtaking excitement, romance, and high camp in a genre that is easy to overdo.”â
Romantic Times
Â
“Duncan can swashbuckle with the best, but his characters feel more deeply and think more clearly than most, making his novels . . . suitable for a particularly wide readership.”
â
Publishers Weekly
(starred review)
Â
“An enormously clever and impressive reshuffle, whether you regard the final twist as a brilliantly contrived sleight or an outrageous swindle: for panache, style, and sheer storytelling audacity, Duncan has few peers.”
â
Kirkus Reviews
(starred review)
Also by Dave Duncan
The Alchemist
THE ALCHEMIST'S APPRENTICE
THE ALCHEMIST'S CODE
THE ALCHEMIST'S pursuit
Â
The Dodec Books
CHILDREN OF CHAOS
MOTHER OF LIES
Â
Chronicles of the King's Blades
PARAGON LOST
IMPOSSIBLE Odds
THE Jaguar knights
Â
Tales of the King's Blades
THE GILDED chain
LORD OF THE FIRE lands
SKY OF SWORDS
Â
A Man of His Word
magic CASEMENT
FAERY lands FORLORN
PERILOUS SEAS
EMPEROR and CLOWN
Â
A Handful of Men
THE cutting EDGE
upland Outlaws
THE STRICKEN FIELD
THE LIVING GOD
Â
ill MET in THE ARENA 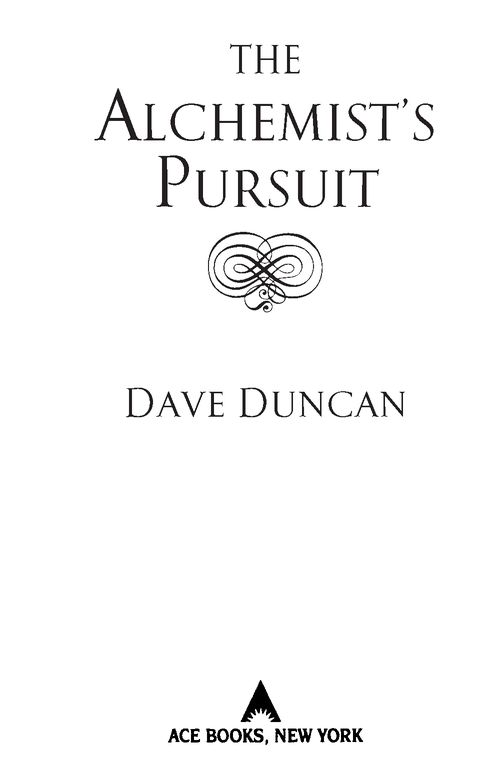 1
T
his doesn't make any sense,” I said. “What use is it?” I saw at once that I had asked a bad question. My master was glaring at me.
He had spent all morning instructing me in numerologyâgematria, isopsephy, and similar thrilling pastimes. He had quoted from the Kabbalah, Pythagoras, Johannes Trithemius of Sponheim, Hermes Trismegistus, Heinrich Cornelius Agrippa, Saint John the Divine, and his own celebrated uncle, the late Michel de Nostredame, marking critical passages that I was now required to memorize. He had set me a dozen problems to work out in my free time, if I ever got any.
And I had just implied that he had been wasting his time and mine.
I never know from one hour to the next what he will tell me to do: cast horoscopes, run errands, blend potions, help him with patients, rescue damsels, memorize pages of ancient mumbo jumbo, cast spells, decrypt letters, massage the doge's lumbosacral musculature, or fight for my lifeâall in the day's work. Apprentices do as they are told; they never ask why.
Yesterday it had been sortilege. Today it was numerology. The real problem was the excess of rheum in his hips, which the current February weather had aggravated until now he was barely able to walk. He had needed help from Bruno, our porter, just to make it out of bed and across the
salone
to his favorite chair in the atelier. There he had refused any breakfast and set out to stuff me with fifteen hundred years of numerology before noon as a way of taking his mind off hurting and growing old. I had run back and forth at his bidding, doing calculations at the desk, fetching musty tomes from the great wall of books, squatting alongside his chair while we went over the texts, word by incomprehensible word. I admit that he never complains of his infirmities, but when they trouble him he complains massively about everything else. I had never known him crabbier than that morning. It was past noon, dinnertime.
“Sense?” he snarled. “Sense? You mean it does not appear to make sense to
you
! Do you claim more intelligence than San Zorzi or Pythagoras? Can you concede that smarter or better informed persons might make
sense
of it?”
“Of course, master.”
“For instance, suppose you explain to me how the doge is elected?”
Doge? So far as I knew, our prince was still in reasonable health for his age. I had updated his horoscope just a month ago, and it had shown no need to elect Pietro Moro's successor for several years yet. The way Venice chooses its head of state is certainly madder than any numerology, but I felt the Maestro was playing unfairly by throwing it in my face.
“The patricians of the Great Council, but only those over thirty years ofâ”
Thunk . . . thunk . . .
Saved! Seldom have I been happier to hear our front door knocker. I rose, relieved to straighten my knees. The Maestro scowled, but greeting visitors is another of my jobs. I went out into the
salone
and opened the big door.
The visitor was unfamiliar, wearing a gondolier's jerkin and baggy trousers in house colors I did not recognize, but his sullen, resentful expression was all too typical of his trade. He was taller, wider, and older than I.
“For Doctor Nostradamus,” he said, thrusting a letter at me. That was the name written on the paper, but he wouldn't know it unless he had been told.
“I'll give it to him directly. Wait for the reply.” I shut the door on him and went back into the atelier.
“Read it,” the Maestro growled impatiently. He is old and shrunken, but that day he seemed more wizened than ever, huddled in his black physician's robe, clutching a cane in one hand, with another lying nearby, balanced on a column of books. Normally he walks with the aid of a long and elaborately decorated staff, but lately he had been forced into using two canes. He dyes his goatee brown and days of neglect had turned the roots to the same bright silver as the wisps of hair dangling from under his bonnet.
I broke the wax and unfolded the parchment. “It's from the manservant of
sier
Giovanni Gradenigo, written in an appalling scrawl and signed âBattista' in the same hand. He begs you to attend his master in haste because other doctors have given up hope of his recovery.”
The Maestro winced at the thought of going anywhere. “He's no patient of mine.”