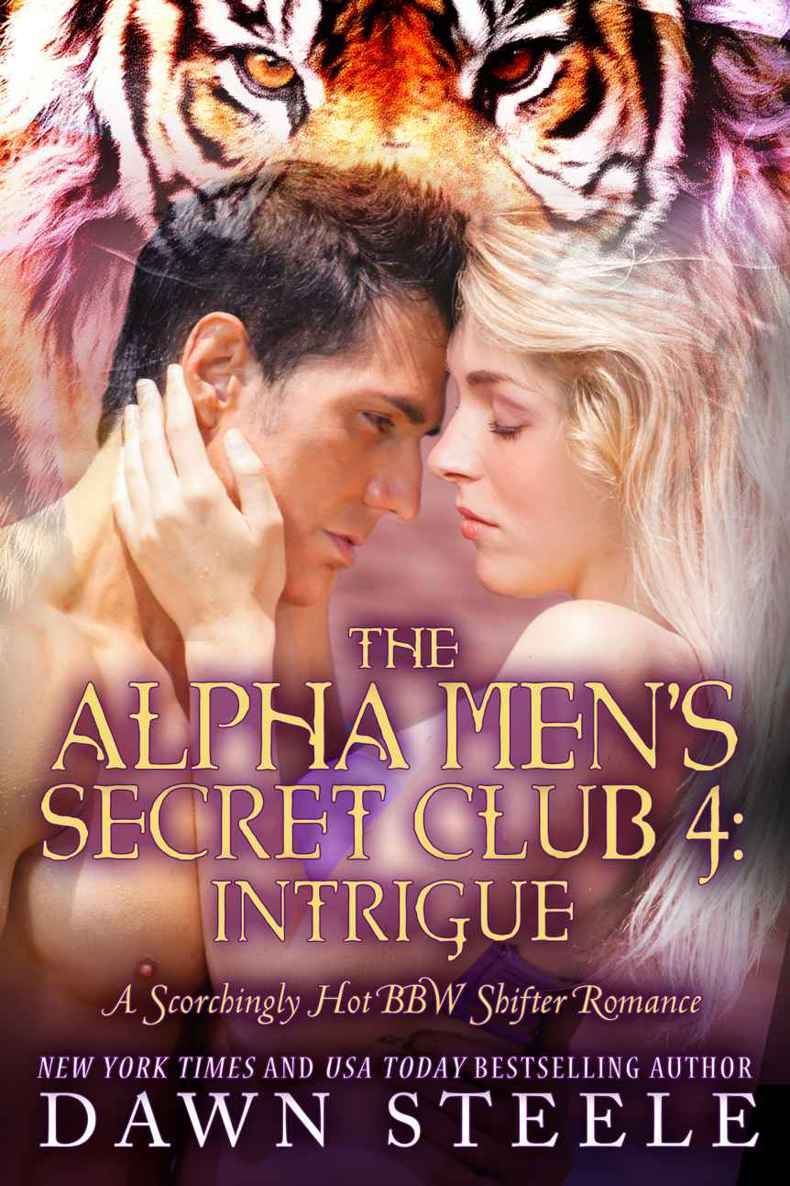 This book is a work of fiction. Names, characters, places and incidents are the product of the author’s imagination or are used fictitiously. Any resemblance to actual events, locales or persons, living or dead, is coincidental.

Dawn Steele/
Aphrodite Hunt is a New York Times and USA Today bestselling author. Her stories have been in the Top 5 of the Amazon overall bestselling charts, the 10 of the Barnes and Nobles overall charts and the No. 1 spot in Amazon's Movers and Shakers. She is a Top 50 Amazon Most Popular author.
She has had no less than 46 stories hit Amazon's Top 100 Erotica/New Adult/Paranormal Romance charts and two which have hit the Top 2. 18 of them have hit the Top 100 Barnes and Nobles bestseller charts.

This mailing list will be for all three pen names: Dawn Steele, Aphrodite Hunt and Artemis Hunt. I’ll only update you on a new romance (and all its subgenres) release, and not erotica for fear of offending some sensibilities. Erotica updates will be on Aphrodite Hunt’s blog only.

In the NYPD police station, Kate was separated from Rust, who was being interrogated in another room. Detective Lance Horner intended to keep them apart so they wouldn’t corroborate their stories, it seemed.

Not that she had anything to corroborate. She was bewildered and scared.
Teddy Mitchell. Murdered! They didn’t even tell her the details of the murder. They probably wanted to tease it out of her.
Oh, really? If you said you weren’t there at the crime scene, then how would you know where he was?

She sat there on the grey metal
chair at the grey metal table in the small interrogation room with grey walls. At least everything was as drab as her mood. She could only imagine what questions they were asking Rust.

Where were you last night
, Professor O’Brien?

What were you doing with Ms. Penney?

She was very, very worried. She didn’t know how much Rust retained
of his human sanity when he transformed into the beast. Was he even aware of anything around him except his own blood lust?

There was nothing she could do but wait her turn.
She could only hope that this was what Lance Horner said it would be – a questioning. Not an arrest.

Because when someone like Teddy Mitchell was murdered, there would be no stones left unturned – even if the entire shifter community
collectively
paid
to keep it under the radar.

In another room, Detective Lance Horner was questioning Rust O’Brien.

Lance
was divorced. He smoked and drank entirely too much, which kept him calm and sane in his line of work. He had seen them all. Lowlifes and professionals and Wall Street stockbrokers – all professing innocence.

I was somewhere else.

I have an alibi!

Rust O’Brien was different. He didn’t profess his innocence at the outset, for one. In fact, he seemed distressed. As distressed as a man like him could seem, that was.

Lance
studied the man in front of him. Rust O’Brien was handsome. Too handsome for his own good. He was the type of man who would grace the cover of GQ – he had that natural grace and sleekness – although he was currently dressed in a T-shirt and jeans. In front of them was Teddy Mitchell’s file. Lance did not open it. He had memorized the details of the case prior to the interrogation of the chief suspect, as was his modus operandi.

Rust O’Brien himself
had an interesting dossier. Lance had made mental notes:

A DOCTOR OF P
SYCHIATRY, ADDITIONALLY.

RECENTLY DISGRACED IN A SEX SCANDAL INVOLVING A COLLEGE STUDENT.

WAS IDENTIFIED BY AN ANONYMOUS INFORMER
ON A PUBLIC PAYPHONE WHO ONLY DESCRIBED HIMSELF AS ‘A WAITER AT THE PARTY’ TO HAVE HAD AN ARGUMENT WITH TEDDY MITCHELL OVER THE AFFECTIONS OF SAID COLLEGE STUDENT, KATE PENNEY.

Lance remembered the transcript of that phone call.

“Yes, this is Officer
Stuttgart speaking.”

“You’ve discovered the body of Teddy Mitchell this morning. Someone leaked it out on YouTube. It’s all over the news now.”

“May I know who is this, please? Can you state your name?”

“I have information. I was at that party on the night before the murder.”

“What were you doing at the party, sir?”

“Saw the whole argument.” Pause. “Between Teddy Mitchell and Rust O’Brien. They were fighting over the girl.”

“Can you describe the argument, please?”

“It was one of those mixer parties, if you know what I mean. Teddy Mitchell was very taken by the girl, Rust O’Brien’s girlfriend. At first, Rust O’Brien was willing to go through with it as threesomes went. But the girl chickened out at the last minute and said ‘no’. Teddy was livid, and Rust was ready to fight him.”

“Were there any words exchanged?”

Then:
“I couldn’t hear if there were any.”

“Could I have your name, please?”

“Afraid not. I hope you’ll find the murderer.”

Lance had no qualms that the informer was who he said he was – someone at the party.
Someone with possibly a penchant to make mischief for the perpetrators concerned. So the party was a rave. He wasn’t surprised. When a billionaire like Aaron Mitchell was involved, anything went, it seemed.

Still, there were plenty of guests at the party. Additionally, Teddy Mitchell
left his father’s party early in his Lamborghini. No one was sure if he left with anyone. Anything could have happened to him afterwards.

Anything could have happened to
ensure that his naked body was found in the woods behind his father’s house the next morning, gouged in the chest as if an animal had ripped him apart.

The body was sent for an autopsy, of course.
Meanwhile, Lance was going to leave no stone unturned.

Rust O’Brien had no reason to murder Teddy Mitchell – unless it was in the heat of the moment.
Rage-fuelled killing. Lance Horner was no stranger to that motive. Rust might have followed Teddy out of the mansion, tracked him down and killed him early the next morning.

Rust O’Brien stared at Lance Horner, his green eyes
alight. There was an undercurrent of something powerful and magnetic about the man, Lance observed. A danger brimming under his smooth skin and pale flesh. Innocent or guilty, Rust O’Brien was a man to be reckoned with.

“Where were you last night, Dr. O’Brien?”

“I was at Aaron Mitchell’s party.”

“Was anyone with you?”

“I brought a date. She’s outside. She had nothing to do with any of this.”

“We’re asking routine questions, Professor, nothing more.
What kind of a party was it, Professor?”

“Are you used to going to such raves?”

“How do you know Aaron Mitchell?”

“My parents know him. They move in the same circles.”

“So he invited you to his rave?”

“Do you know Teddy Mitchell?”

“You met him for the first time last night?”

“Was there an argument?”

Rust paused to seemingly think. Then: “I wouldn’t exactly call it an argument.”

“Tell me what happened.”

“I’m afraid I’m going to have to insist
on explicit details.” Lance favored Rust O’Brien with a significant look. “You can tell me what happened. In my line of work, I’ve heard it all, believe me.”

Rust sighed. “
My girlfriend and I were at a . . . bondage rack. I wanted to let her experience public exhibitionism. So I tied her up and displayed her. We weren’t the only ones doing that there. The whole party was . . . catered towards that sort of thing.”

He halted, trying to find the words. Lance sensed the Professor was not a man usually at a loss for words, and that he was hiding something – trying to put it in a different context.

This was getting interesting.

“Teddy was the first to come up. He was admiring my girlfriend. He asked if he could touch her.”

“And what did you say?” Lance was non-judgmental when it
came to that sort of thing.

“I asked
her
permission.”

“She didn’t say anything for a while. And so he touched her.”

Rust paused again. This was clearly difficult for him. “Her genitals.”

“She reacted
favorably to his touch.”

And you were OK with that? Lance thought wryly. But he didn’t say anything.

“Did you say anything?”

“I don’t recall saying anything then.”

“How did Teddy react?”

“He . . . ” Rust visibly swallowed “ . . . didn’t react well. He wanted to fight me. We moved away from Kate. But before he could land a punch, his father came onto the scene and stopped him.”

“His father had words with him. I don’t remember the exact conversation, but it had something to do with letting the guests be. He asked Teddy to go back to the house.”

“Yes. His father apologized to us, and asked us to stay.”

“And you both stayed.”

“Did you see Teddy again that night or the next morning?”

“What did you do
for the rest of the night?”

“My girlfriend and I went to a more secluded spot. And we made love.”

“Did anyone see you?”

“So you have only your girlfriend to confirm your alibi?”

“How long did you make love for?”

“And after that? What did you do?”

“After you took a leak, what did you do?”

“You didn’t go back to your girlfriend?”

“What things did you say to each other?”

“I don’t remember exactly. But it was . . . about how I was possibly
hurting
her in our relationship.”

“How did she react to that?”

“Where exactly did you take a walk, Professor O’Brien?”

“In the woods. It’s part of Aaron Mitchell’s estate.”

“How long did you walk?”

“Yes. I had to mull things over.” Rust’s expression suggested that he knew he had just revealed he had no alibi but could think of nothing to offset the truth.

“Was anyone with you?”

“Did anyone see you?”

Lance sat back in his chair.

He said, “Don’t leave town. We might have to ask you further questions.”