Read The Boy in His Winter Online

The Boy in His Winter 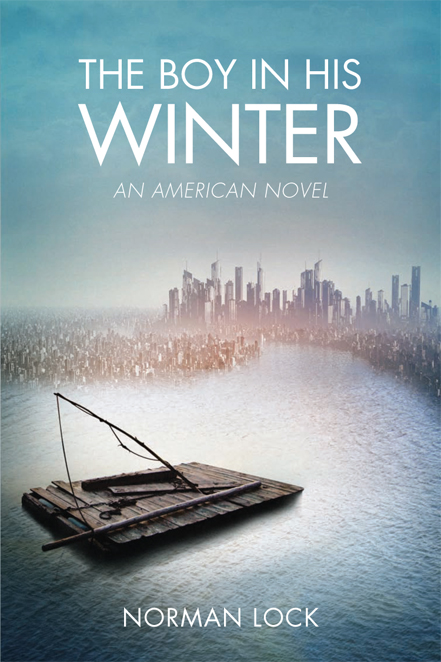 A History of the Imagination

Land of the Snow Men

The Long Rowing Unto Morning

The King of Sweden

Pieces for Small Orchestra & Other Fictions

Favorite Sports of the Martyrs

The Book of Stains*

The Monster in Winter

In the Time of Rat

Published in
Two Plays for Radio

First Published in the United States in 2014 by
Bellevue Literary Press, New York

F
OR
I
NFORMATION
, C
ONTACT
:

The boy in his winter : an American novel / Norman Lock.

This is a work of fiction. Characters, events, and places (even those that are actual) are either products of the author’s imagination or are used fictitiously.

All rights reserved. No part of this publication may be reproduced or transmitted in any form or by any means, electronic or mechanical, including photocopy, recording, or any information storage and retrieval system now known or to be invented, without permission in writing from the publisher, except by a reviewer who wishes to quote brief passages in connection with a print, online, or broadcast review.

Bellevue Literary Press would like to thank all its generous donors—individuals and foundations—for their support.

To my grandsons, Max and Drew, and for my father, a sailor who has lit out for the Territory

I reckon I got to light out for the Territory . . .

—
The Adventures of Huckleberry Finn

I
LOOK BACK IN MY OLD AGE
on that long-ago day when I came off the river and began my grown-up life—and much earlier still, when, no more than a boy, I set out from Hannibal on the raft with Jim. Of course, I reckon time differently now than we did then, sweeping down the Mississippi toward Mexico as though in a dream. Those days did seem like a dream, though not mine, or Jim’s, either, but one belonging to somebody whose hand I almost felt, prodding me onward in spite of my reluctance. Or maybe it was just the river I sensed, shaping a kind of destiny for me and also for Jim, whose end came before mine and was, sadly, neither glorious nor kind. We were, each of us in his own way, looking for something that did not exist.

That other story, Jim’s and mine, about a trip downriver, was true enough. But this, the one I am about to tell, is just as true and even more amazing.

You want to know what I mean by “true enough”?

I mean that—regardless of how things might have been exaggerated in the telling, how far the truth got
stretched
—you could always find in the world the same sort of perversity that was set down in his book, only the reality is not so entertaining or picturesque. What I hope to tell if I can find the words and can bear the sometimes bitter recollection is terrible: an abomination dragged up from the mind’s reeking bottom like a dead woman asleep inside the closed petals of her sodden skirts. I saw that after the wreck of the
Sultana,
whose charred flotsam glided down the somber
river like so many smashed front porches. Mine will not be painted in the garish colors of the book that preceded it by nearly two hundred years.

Mark Twain’s, of course. Who else besides him (and now me) has bothered about the fate of two outcasts and runaways: one a thief, the other a slave, both determined to put a thousand miles of river water between themselves and righteousness? We wanted only our freedom. We saw it in different lights, but that’s all we wanted. To take the cramp out of existence, to lift our heads above our galled necks and tell all those who said no at every turn to go to hell—or to “blazes,” as Tom Sawyer would have said, whose language was more refined than my crude midwestern vernacular, which, in the years since then, I have smoothed out like a wrinkled pair of pants after the hot iron has done its work.

What? You want to know why the story I have to tell is more amazing?

Because it not only happened on the Mississippi River between Hannibal (Twain called it St. Petersburg) and the Gulf of Mexico, along with other of the world’s liquid places, but also in time—an unnatural span of it that ordinary mortals cannot hope to cross in a lifetime, or even two.

Catching Fire: How Cooking Made Us Human by Richard Wrangham
Keeping His Promise: A When It Happens Novella, Book 2 by Rhyannon Byrd
Just Go by Dauphin, M.
Wicked Fate (The Wicked Trilogy) by Tabatha Vargo
Niebla by Miguel De Unamuno
The 22 Letters by King, Clive; Kennedy, Richard;
Beauty by Daily, Lisa
The Missing- Volume II- Lies by A. Meredith Walters, A. M. Irvin
A Corpse in a Teacup by Cassie Page
B007GFGTIY EBOK by Wood, Simon