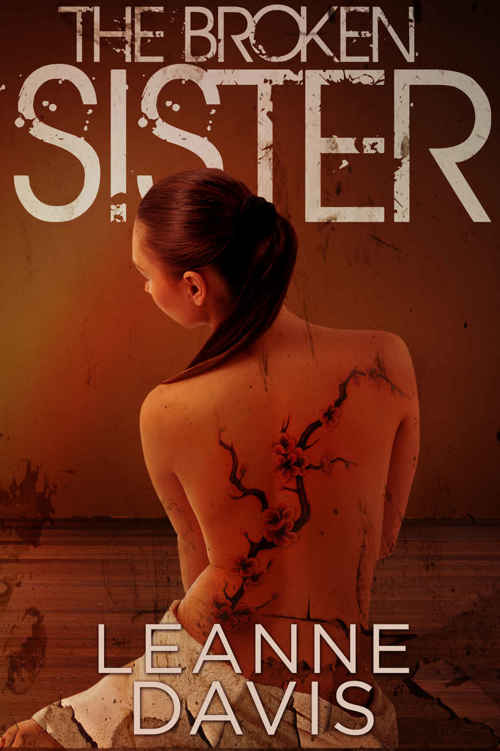 Other Titles by Leanne Davis

This is a work of fiction. Names, characters, places, and incidents are either the product of the author’s imagination or are used fictitiously, and any resemblance to actual events, locales, or persons, living or dead, is entirely coincidental.

All rights reserved. No part of this book may be used or reproduced in any manner whatsoever without written permission of the author except in the case of brief quotations embodied in critical articles or reviews.

For anyone who has ever felt all alone and broken.

~We are all broken, that’s how the light gets in ~

Other Titles by Leanne Davis

KYLIE MCKINLEY GROANED AS she rolled over on the bed to land flat on her back as her left hand flung out and smacked the mattress. The overwhelming thirst was what first pierced her consciousness. Her throat was on fire. It was a fierce, nagging need that made her saliva stick to her tongue as she tried to alleviate the burning by swallowing. It didn’t help. She opened her eyes and stared up. Dizziness rushed through her forehead and seemed to make her stomach pitch and roil as if she were on a storm-bound ship. She took in a breath and turned her head to the right, and then to the left.

Her consciousness started to waken and come alive as sharp as her thirst had. She sat up with freight and looked around.

Bed?
She was on a bed she didn’t recognize. Why? How?

She gulped in repulsion when she glanced down, feeling cool air over her bare skin. Her jeans were gone. She wore only her t-shirt, a white one with black lettering, the name of her favorite local indie band on it. It was pulled up around her neck, and her arms weren’t in it. She grabbed the edge of the shirt and shot her arms through while pulling it down. She let out a cry as she tried to slide up and frantically get to her knees. Where was she? A bedroom. Someone’s bedroom. The bed once had sheets on it but they were scattered everywhere so parts of the bare mattress poked out.

It stank. She wrinkled her nose as the rancid odors of sweat and semen wafted up to fill her nostrils. She let out a whimper as she realized the dried crusty stuff between her legs was semen.
She
was what smelled. She and the bedding. There was posters on the wall of famous quarterbacks. There was a water-stained ceiling over her and just a floor lamp for lighting.

What happened? How did she get there? But more importantly,
where
was she? How was there semen on her legs?

The panic started to climb up her spine like a monkey up a tree. She whimpered as she hopped to her feet. The carpet was gritty under her bare feet. Why were they bare? She cringed at what touched her. Glancing down her gaze was drawn to the blood smeared on the mattress, dark spots glaring back up to her. Her blood? Its presence was a mocking clue of what happened there. But, as frantically as she tried to scratch through all her memories, she had none,
absolutely none,
about this room.

Or what the hell she was doing in it.

Frantic, she dropped to her knees and looked under the bed frame. She needed her clothes and she needed them now. She needed to leave before someone came back. Assuming, of course, she could leave. What was she doing here? Was she stuck? Some kind of sexual prisoner? She panicked and whimpered again as she started pushing, prodding, and throwing the bedding around until she located her black jeans. She sighed as she scurried to get them over her nakedness, cringing as the material swiped over the crusty stuff on her inner thighs and up between her legs. She saw her boots, separated; one in the corner, one along the opposite wall. She grabbed them and gripped the door handle. She pushed at her hair, a mess of long auburn hair that was snarled and ratted. She brushed it back. She’d sweated along her hairline and it was now thick with the residue of her hair mouse and spray.

When she burst out of the door, she was met by an ordinary, empty hallway. She was in a house. She was still at the frat house! She dropped her chin to her chest. She came here for the party and flirted and Tommy was finally noticing her… and then what? It ended. Her memories stopped there. Last she clearly remembered, she was standing off in the corner of the crowded kitchen near the back door, talking to Tommy, smiling up at him, licking her lips suggestively, and they were laughing. About what? What were they laughing about? Bits of the conversation start to filter in her brain… It was some silly story about high school… and then it ended. Everything was blank. Then here she was, waking up thirsty, dizzy, and confused. Her head was pounding. She had no idea how she got from the crowded kitchen to alone and stripped naked lying on a dirty mattress in the upstairs bedroom.

She quietly stepped forward. There was noise downstairs. Voices. Male voices laughing, talking, ribbing each other. But it was too quiet for the party to still be raging. It was more muted. She stopped at the top of the stairs and then had a view of the front entry and glimpses of daylight seeping in the bare windows. It was morning. Somehow she had missed an entire night of her life.

Maybe she had drank that much. She did drink often way too much when she was partying. She was nervous, and excited to be there. She wanted Tommy to notice her. Maybe she’d just passed out from too much alcohol. But… it felt different than that.

She clutched her boots to her scrawny chest. She wished for a shower, coffee, and her mother. She wished the most that she was waking up in her mom’s house and going down to breakfast with Mom and Donny and Julia talking nonstop as Donny teased her and Mom. The desire and the breakfast scene played out with perfect clarity in her memories.

The exact opposite of whatever happened
here.
Nothing played through her memory.

She tiptoed down the stairs. She made it half way before one of them noticed her. They were cleaning up. Two paused from collecting all the trash. Another was mopping up spilled pink liquid, the spiked punch. She stared in fright at the three who spotted her.

“Another one, huh? Well, quit waiting for a wedding ring, continue your walk right out the front door.”

She spun around and almost flung herself out of the front door as their laughter followed her. It chased after her like a rabid dog. They were laughing at her, enjoying her misery as she started barefoot, cold, and alone down the sidewalk. Each time she stepped she felt semen drip out of her core and it squished around her underwear. Each time her legs moved, more spread around her thighs. They are laughing as they had all witnessed her disheveled appearance. She didn’t look even remotely like a heartbroken coed.

But all they had in consideration or compassion for her was mocking, evil laughter.

She ran into a few students strolling to get coffee or hit the gym. She kept her head bent down. She staggered to her dorm building. She didn’t go into her room. She went straight to the bathrooms, hooked her hand into the stall, and pushed the water to on. She stepped into it immediately.

Cold water poured down over her, her clothes, even the boots clutched in her hands. She let it run and run and run. She opened her mouth to let it fill up her mouth over and over again to try and abate the thirst. It finally turned warm and started to calm her tremors, which came from a combination of fear, grief and cold. She finally found the energy to strip her shirt over her head and pull her sodden jeans off her. She would throw them in the trash.

She curled into the bottom of the stall and let it all wash down the drain. Stranger’s semen. Her own blood. She didn’t really know how it got there.

She had no soap. She finally got out and, dripping wet, crossed the tiled bath and put her hand under the hand soap dispenser provided to students to wash their hands. She pushed and pushed on the unit until her palm was covered in the congealed, gooey white soap that smelled like antiseptic. She rubbed it over her entire body and into her hair and then stood some more in the shower. Getting clean. Trying so hard to get clean. It wasn’t working.

She finally gave up. She walked naked, heedless of the few she saw to her dorm hallway. She had no keys. She knocked and knocked to no answer.  Then she remembered her key had been in her jeans. Silly, stupid girl, she admonished herself. Then she went back to the trash, grabbed her jeans and searched her pockets. Yup, still there. She took it and entered her dorm room, ignoring the few startled looks and one guy who whistled as she walked naked and wet and dripping around the hallway.

She’d had sex. Sex she hadn’t wanted or said yes to or been conscious for. Wasn’t that rape?

She buried her head into her pillow. But there were no images to banish. There were no noises or smells or memories to replay over and over. There was a blank wall in her.

It was good. She didn’t remember it. So it didn’t have to mean anything, did it?
It didn’t happen.
It could be buried, suffocated, tossed out, because there was no memory of it to struggle with.

She wasn’t really raped. She was, what? What was she? She didn’t know. She had no words. She had no memories. She had an aching lower half. She had bled. But she had nothing else.

She had lots and lots of feelings she had no idea what to do with. But how could she grieve something she didn’t remember happening to her? Simple: she couldn’t.

Maybe this was all a blessing.

Maybe if she said enough it would be true.

A Mate's Escape by Hazel Gower
No One is Here Except All of Us by Ausubel, Ramona
Garden of Shadows by V. C. Andrews
More Than an Echo (Echo Branson Series) by Silva, Linda Kay
The Wedding Audition by Catherine Mann, Joanne Rock
The Girls Club by Jackie Coupe
Insatiable by Dane, Lauren
Cast Iron Conviction (The Cast Iron Cooking Mysteries Book 2) by Jessica Beck
Evicted by Matthew Desmond
Delicious Do-Over by Debbi Rawlins