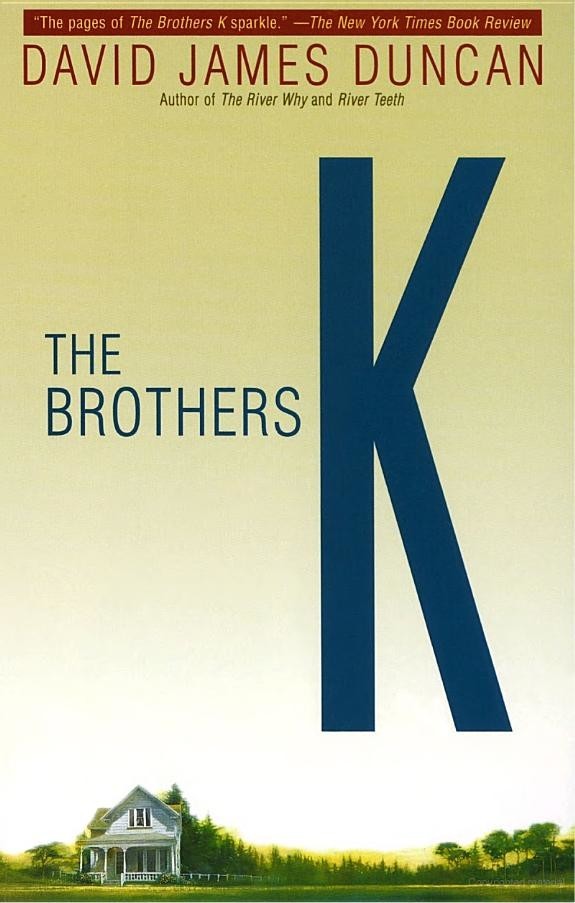 “Duncan’s prose is a blend of lyrical rhapsody, sassy hyperbole and all-American vernacular.”

“The Brothers K
does what a novel should do, what one almost despairs of contemporary fiction ever doing: it teaches you something, makes you think, breaks your heart, and mends it again.”

“The Brothers K
affords the … deep pleasures of novels that exhaustively create, and alter, complex worlds. … One always senses an enthusiastic and abundantly talented and versatile writer at work.”

“Duncan … tells the larger story of an entire popular culture struggling to redefine itself—something he does with the comic excitement and depth of feeling one expects from Tom Robbins.”

MORE PRAISE FOR
THE BROTHERS K

“Marvelously detailed and poignant, and a garden of delights for baseball lovers.”

“[A] large and marvelously ranging story.”

“Heartfelt, ambitious and as hefty as a Bible,
The Brothers K
offers a loving portrait of family, a fierce indictment of Vietnam-era America, and an eclectic erudition that manages to put Yogi Berra, Porky Pig and St. John of the Cross in the same ballpark.”

“Terrific … thoroughly engrossing … firmly establishes David James Duncan as a writer with an original voice that is not only a pleasure to hear but also has a good deal to say.”

“David James Duncan, in what should go down as one of the great books of this century, has done the impossible. He has made sense of the 1960s. … A master storyteller.”

“This is the stuff literature is made of. … Simply stunning: human, bold, sweetly simple yet sensitive.”

“Generous, resonant and funny … An affirming epic that’s complicated, messy, mirthful and has the smell of real life.” 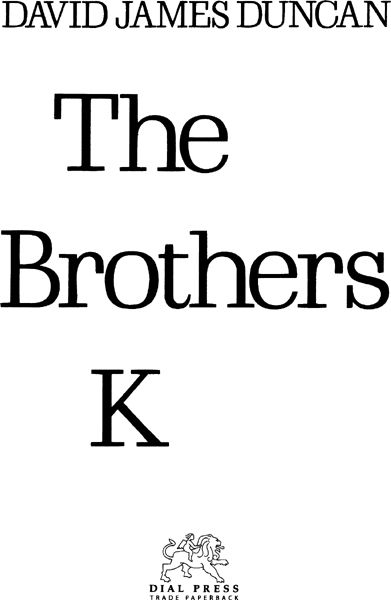 I wish to thank my wife, Adrian Arleo, my son, Thomas Faredoon, and my mother, Donna, for their faith and great patience throughout the writing of this book, and my daughter, Cecilia, for providing us a happy ending. For getting the show on the road I thank my ex-editor, Nick Bakalar, and my agent, Michael Snell. For the kind of indispensable, hands-on, up-to-her-elbows editorial advising and debating and tinkering and championing that I thought no longer existed, I thank Ms. Casey Fuetsch. For an excellent critical reading of the first half of the novel, I thank Dr. Kevin Oderman. For their equally encouraging inability to slow down and read the same pages critically, I thank Melissa Madenski, Tom Crawford, and Casey Bailey. For saving my sanity and possibly this manuscript during my run-in with floppy disks, I thank David Ousele. For that frigging disk-drive (which I now use as a chipper to clean up tree-trimmings in my yard), I thank Apple.

In 1990 I heard a comedian named Steve Smith speak, on television, virtually the same sentence that Papa speaks about God and money. I wish to acknowledge the coincidence. Less coincidentally, my sub-chapter, “Everett Routs the Ottoman Empire,” was inspired by an urge to pit my own revolutionary against the most eloquent anti-revolutionary I’ve ever encountered—a man named Gürtzner-Gontard in Heimito von Doderer’s novel
The Demons
. By the time I’d finished Americanizing Gontard’s ideas and audience I’d altered his ideas so thoroughly that I’m not sure Herr Doderer would appreciate my acknowledgment, but I
am
indebted. For his excellent proofreading of the baseball details, I thank Steve Colton. For the same kind of proofing of the Indian linguistic details, thanks to Carl and Judith Ernst. For his portraits of prison work camps and draft resisters, thanks to Robert Wollheim. For their help with the Vietnam scenes, I thank Dick Morgan and Doug Haga. For centrifuging flickers, I thank the Boyden brothers. For help with the limericks, I thank Gale Ousele. For infecting me with their love for baseball, I thank my father, E. Dean Duncan, and my late brother, Nicklaus John.

BOOK ONE
Joy to the Wordl!

CHAPTER ONE
The Shed

CHAPTER FOUR
Epiphany of a Toe

CHAPTER ONE
Our Brilliant Careers

CHAPTER ONE
Names of Stars

CHAPTER ONE
We Support Our Troops

BOOK ONE
Joy to the Wordl!
CHAPTER ONE
Chevalier

P
apa is in his easy chair, reading the Sunday sports page. I am lying across his lap. Later he will rise to his feet and the lap will divide into parts—plaid shirt, brown leather belt, baggy tan trousers—but for now the lap is one thing: a ground, a region, an earth. My head rests on one wide, cushioned arm of the chair, my feet on the other. The rest of me rests on Papa. The newspaper blocks his face from view, but the vast pages vibrate in time to his pulse, and the ballplayer in the photo looks serious. I ask no questions. I stay quiet. I feel his slow, even breathing. I smell his smoke.

On the opposite chair arm, beside my argyle shins, is a small ashtray—an upholstered sandbag with five brass grooves arching over a green glass dish. Papa’s cigarette smolders in the center groove. It has no filter. It’s
called a Lucky Strike. Past its slow blue smoke is the diningroom window. Past the window, yellowing maples and a low gray sky. Past the maples and under the sky, a neighbor man with a pitchfork, burning an immense pile of black limbs and old brown leaves.

Papa’s hand appears. It hangs above the ashtray. It is blue-veined, black-haired, brown-skinned, scarred and powerful. It takes up the cigarette and disappears behind the paper. The neighbor man throws an enormous forkful of leaves onto the burn pile, smothering the flames. Papa takes a deep breath. The hand returns the cigarette to the same brass groove, a quarter-inch orange coal on the end of it now, the smoke rising up much faster than before. A dense cloud of white billows up through the smoldering leaves. Papa breathes out. The leaves ignite. Even through the window I hear them bursting into flame. Papa turns a page, the paper makes the same crackling, burning sound, and I glimpse his eyes before the paper reopens: they are serious, like the ballplayer’s.

Idly Papa’s long fingers twist the ashtray in a circle. Slowly the man with the pitchfork circles his burning brush. The hand picks up the cigarette. The man forks more leaves onto the fire. The hand returns the cigarette, folds it against the green glass, crushes the hot coal with the tip of a bare finger. The man stares for a moment into the fire, then sticks his fork in the ground and walks away.

The newspaper shudders, closes, then drops, and there is his face: the sun-browned skin and high cheekbones; the slightly hooked, almost Bedouin nose; the strong jaw still shiny from a late-morning shave, a few missed whiskers at the base of each nostril; the gray eyes—clear, kind, already crowfooted, and always just a little sad around the edges.

There he is. Papa. There is my father.

T
he screen door slams. I lurch, open my eyes—newspaper falls from my body. I am lying alone in my father’s chair. He has vanished right out from under me, leaving a blanket of sports page when he left. I look outside: the sky is still low and gray, yellow leaves still waving, but the burn pile is ashes and the man and pitchfork are gone. I look at the chair arm: the ashtray is still there, but the green glass is clean, the ashes and Lucky butt gone.

Jack Daniels and Tea by Phyllis Smallman
Lyon on a Leash by Knowles, Erosa
You Belong To Me by Ursula Dukes
A Chance at Love (A Ferry Creek Novel): (a billionaire romance novel) by James, Karolyn
Alien Chronicles 1 - The Golden One by Deborah Chester
Boss by Ashley John
The Last Sunset (Preppers Fiction): The Dark Star is Coming and Death Lingers in its Shadow (Preppers Fiction, Meteor Fiction, Apocalyptic Fiction, Survival Book 1) by Montgomery, Frank
Rekindle by Morgan Nicole, Murphy Rae
Let Your Heart Drive by Karli Rush
Never Wake by Gabrielle Goldsby