The Bug: Complete Season One 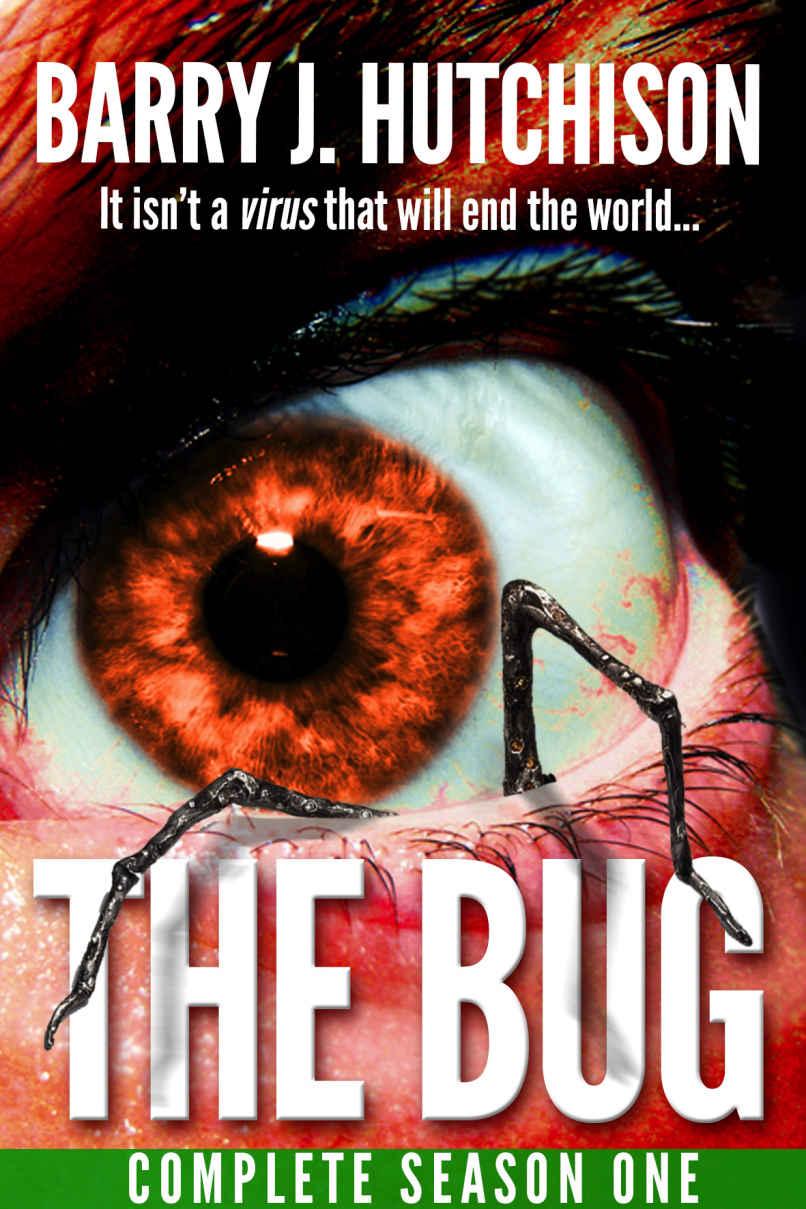 THE BUG: COMPLETE SEASON ONE

Copyright © 2014 by Barry J. Hutchison
All rights reserved. This book or any portion thereof
may not be reproduced or used in any manner whatsoever
without the express written permission of the publisher
except for the use of brief quotations in a book review.

Find out how the nightmare began with this
free and exclusive
prequel episode.

You’ll also be the first to hear about new episodes, special offers, 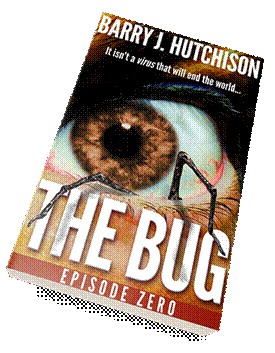 Or get all six episodes in this single volume:

The Bug – Complete Season One

It's Tuesday morning. Eight-forty-five-ish. Thereabouts. We're stuck in traffic on the way to school. Again. Every day I say we need to start leaving earlier. Every day we don't quite get around to it.

The car's hot, even with the windows rolled all the way down. Horns blast all the way down Washington Street. It's the heat, the damn heat. We're not used to it up here. It makes people crazy. Even the air-conditioning has given up the ghost. The hot air it blasts at me when I switch it on feels like laughter in my face.

At least the kids are quiet. Bradley's deep into some handheld video game. He's got that fire in his eyes that nowadays only seems to come when he's shooting pixel people in the head. Claire's reading, even though reading in the car usually makes her throw up.

“You sure that's a good idea, honey?” I ask. “Don't want you blowing chunks before you get to school.”

“It's OK, I only get sick if the car's actually moving,” she says without looking up, and I can't really argue with that. Don't even know how long we've been sitting here. Longer than usual, and there's no sign of the traffic even starting to move.

I straighten my arms and push myself back in my seat, trying to fend off the back cramps before they can start. It turns into a stretch, which leads on to a yawn. That's what I get for staying up late and shooting pixel people in the head. Still, it was a gratifying experience. I can see why Bradley's so hooked.

There's a movement in the car, just below my line of sight. I look down at my lap, and that's when I see it.

That's when I see the bug.

It's dark and shiny. And big. Real big. About the size of my iPhone, maybe a little bigger still. It's on my thigh, right by the steering wheel. Even through my trousers I can feel its spindly legs
trip-trapping
against my skin.

I gotta admit, insects aren't really my strong point. I don't like them. In fact, I loathe the creepy-crawly little bastards. My natural instinct is to bludgeon them on sight with whatever happens to be closest to hand.

But I'm not bothered by this one. I gaze down at it and get the distinct feeling that it's gazing back up. But I'm not afraid. Not a bit. There's no revulsion, no disgust, no urge to smash it with my shoe. The bug is just there, but in my head it's like it has always been there, right there on my lap. Gazing up. Nothing for me to worry about.

I blink and it vanishes. There one second, gone the next.

I don't know how, exactly, but I guess it must crawl inside me, because first I can feel it, then I start to hear it. Chittering. Whispering. Telling me to do things. Terrible things.

A car horn blasts. The woman in the 4x4 behind me points angrily ahead. The traffic is on the move. I grip the wheel and grit my teeth and lurch us as quickly as I can towards the school. I turn the radio up loud. The kids complain, but the bug stays quiet. I can still feel it though, wriggling around inside me.

My hands shake all the way to the front gate. I brake hard and the seatbelt goes tight across my chest.

I watch them walk – not run, why don't they run? – through the gates and up towards the front door. Other kids swarm in the doors beside them. I keep watching until they're all inside. Keep watching until long after all the other parents have left.

I move to drive away, but then I hear the bug begin to whisper again, its voice soft but urgent in my brain. It tells me my children are careless. Tells me they've forgotten something. Tells me I should bring it to them.

The door beside me opens. Was that me? I try to fight, to resist, but then I'm standing on the sidewalk, and my feet are taking me to the back of the car. The trunk opens with a
squeak
. There's not much in there. A couple of scrunched up carrier bags, a pair of running shoes I bought in January and have only worn once.

My eyes fall on the tire iron. I look at it for a long time, listening to the bug as it squirms and whispers, whispers and squirms.

This is good,
it says.
These are the things a good daddy does
.

The iron is heavy in my hand, the pitted metal rough against my skin. There's a
clunk
as the trunk closes, although I don't remember doing it.

Now bring it to them
, the bug says, and its squirming makes my face go hot and my insides itch.
Bring it to them, and show them what we do to careless little children
.

So I bring it. And I show them.

God forgive me, I show them.

There is a woman on television and she is looking at me and she is a whore. She says words I do not like to hear. They give me the bad feeling and make me itch on the inside until I cannot listen to them anymore. I press the button and the television goes dark and the room goes dark, but I know she is still there, inside the television, looking at me and speaking words I do not like to hear.

I get up from the chair and do not look at the television and walk four steps to the window. The window is dirty on the outside but clean on the inside. Outside is the street. It is dark, like the television is dark.

Lacey Crane is a whore.

And whores must be punished.

Martin Marshall hovered just inside the yellow and black rectangle of DO NOT CROSS tape, doing his best to keep out of everyone's way. The cold was in about him, jabbing at his kidneys and grabbing at his balls. He was thinking about his old school careers advisor, wishing he would traipse round the corner now, so he could punch him right in the fucking face.

Join the polis, Martin. You'll
like
the polis. Being in the polis is
magic
.

“What a fucking night.”

“
Christ
,” Marshall yelped, head whipping round. DCI Hoon stood on the other side of the tape, hands in his pockets, eyes on the guys in the white paper suits. The street light above him turned his pock-marked face into a landscape of shadowy craters.
Big Boaby Hoon, wi' a face like the moon.

“No' quite, son.” Hoon's eyes left the paper suits and went to the two sheets lying side by side, a few feet apart on the ground, two someone-sized lumps beneath them. “What we got?”

“Aye, well it’s been a night of belters for some of us, Detective Inspector. Half of Glasgow’s leathering seven shades of shite out of the other half. The whole city’s gone mental.”

“Whole world. Hear about that business with the school in the States? Dad and his two kids.”

Hoon nodded grimly. “Drugs. Bet it's drugs. But this is getting us nowhere. Who's our victim?”

“Right, well, we're actually doing all right there, as it happens.” Marshall fumbled open his notebook, his hands shaking - only partly from the cold. “Young lassie. Just turned twenty-four this month, according to her driving license.”

Marshall angled the book towards the light and tried to decipher his own scratchy scrawl. “Lacey,” he announced. “Crane. Lacey Crane.”

For the first time since arriving on scene, the Chief Inspector looked his way. “What... the Yank bird? Off the telly?”

“Aye you do,” Hoon said, badger eyebrows meeting in the middle. “Blonde haired piece. Does the weather. Pretty wee thing.” He rocked back and forth on his heels. “Probably no' any more, mind you.”

“Aye, well, you can say that again.” Marshall scribbled in his pad. “
Weather
,” he said, his pen scratching the word onto the paper. “I'll get someone looking into it.”

“What about the other one?”

A slab of a hand emerged from a pocket. A sausage finger jabbed past the guys in the white paper suits. “
That
other victim.”

“For fuck's sake. The sheet. The other sheet.”

The badger eyebrows crawled halfway up Hoon's forehead. Air whistled through his yellowed teeth. “Aye? Jesus. That's a new one.” He nodded in the direction of the sheet-covered mounds. “What's top and what's bottom?”

“No, that's not what I... It's not...” Marshall stammered, then gave up trying to find the words. He raised a hand and pointed instead, first to one sheet, then the other. “Left half. Right half.”

Hoon didn't say anything at first, just stopped rocking on his heels, slipped his other hand out of his pocket, clenched his jaw then let it relax. Even when he did speak, almost half a minute later, it wasn't anything worth writing home about.

“Funny,” said Marshall, not smiling. “That's what I said.”

“That's no’ possible. No way. No way that's possible.”

“Apparently it is, sir,” Marshall told him, with the look of someone who'd seen first-hand precisely how possible it was. “And, well, you see, the thing is...”

Hoon turned to him. “What?”

Marshall looked across to the sheets, both of them washing-powder-ad white. “The cut in half thing?” he said. “That's not even the weirdest bit.”