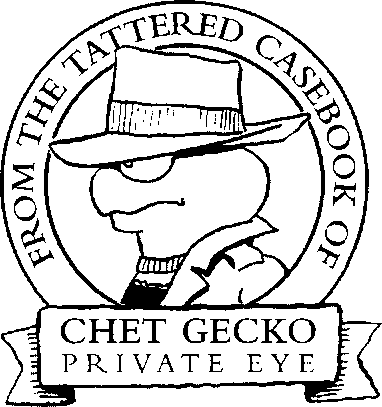 Many thanks to Michael and Steven,
who shared the gecko vision.

All rights reserved. No part of this publication may be
reproduced or transmitted in any form or by any means,
electronic or mechanical, including photocopy, recording,
or any information storage or retrieval system, without
permission in writing from the publisher.

Requests for permission to make copies
of any part of the work should be mailed to
the following address:
Permissions Department, Harcourt, Inc.,
6277 Sea Harbor Drive, Orlando, Florida 32887-6777

For J. C, my first reader, and Mom and Dad, who introduced me to the low-rent charms of gumshoes 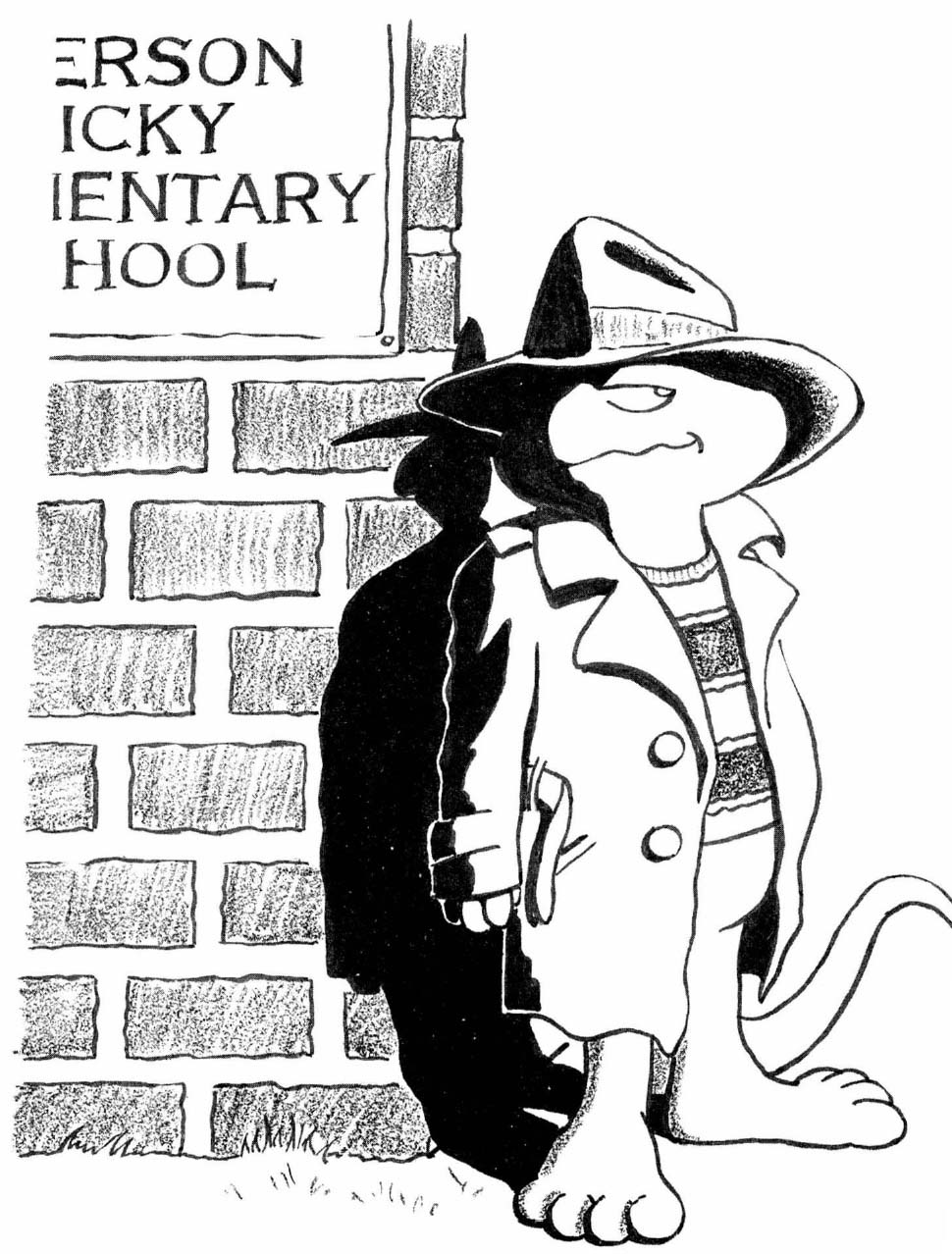 A private message from the private eye...

I've always loved a good mystery Like, how do they squeeze ketchup into those little plastic packets? And, why is cafeteria food so bad? And, who put the
boom
in the
shaka-laka-boom-boom?

My curiosity has given me a reputation around school. Kids talk. They say I'm someone who can solve mysteries.

They're right. I can.

I go to fourth grade at Emerson Hicky Elementary.

1 The Case of the Long-Gone Lizard

In other words, a normal school day.

I was watching a fly. He zigged and zagged over my desk. He flew barrel rolls and loop-de-loops. Near as I could tell, he was getting ready to sing "The Star Spangled Banner."

So I shot out my tongue and zapped him. Bull's-eye. Midmorning snack. 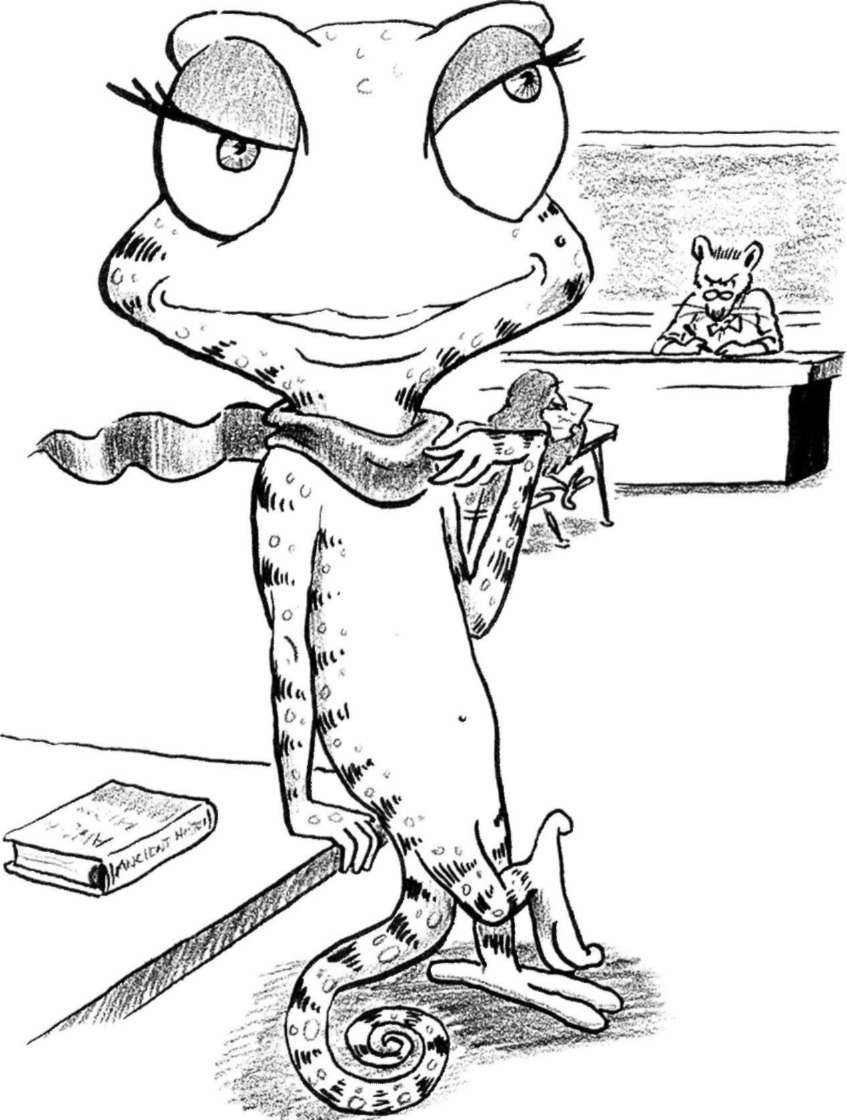 I looked up. She was cute and green and scaly. She looked like trouble and she smelled like ... grasshoppers.

Shirley Chameleon leaned on my desk. Her chartreuse scarf tickled my nose.

"Haven't seen you around for a while," she said. "Where've you been?"

"Duh. Right here in class." I've always been fast with a comeback.

"Listen, I need your help," she said.

I checked out the classroom. Old Man Ratnose was busy grading papers. Tony Newt was scribbling rude designs on Walter Pigeon's tail feathers while his brother stifled giggles. The other students were reading their books or quietly torturing each other. Kids.

We walked back behind the aquarium.

"Sit," I said. She sat. She turned a deep brown, to match the chair. Chameleons do that.

"Spill your guts," I said. She spilled.

I knew the kid. He had Day-Glo stripes and a bad attitude. He liked to light matches off his scales and put them out in his nostrils.

Pretty tough for a first grader.

"What's up with Billy?" I asked Shirley. "Did he steal some kindergartner's lunch money?"

"No, it's not that, it'sâoh, never mind." Shirley shook her head and stood up. One tearful eye looked at me while her other eye watched a gnat flying above us. Chameleons do that.

She dabbed at her eyes with a handkerchief. I zapped my tongue out and nailed the gnat. No sense in wasting good food. But I almost choked on the bug when she finally answered.

"Billy has disappeared," she said. "He never showed up for school. I found his book bag on the playground, and IâI just know something's wrong." Shirley turned a lovely shade of blue.

She was the kind of girl I could have fallen for. If I liked girls.

"The last time he played hooky without me, I tied his tail into a knot."

I blinked. No wonder Billy had a bad attitude.

"Still, have you checked his usual hangouts?" I said. "You know, the mall, the sandbox, the tattoo parlor?"

"Oh, that's great." She pouted. "You're some detective. You're supposed to know these things."

She grabbed my arm.

"Chet, you've got to find him today, before the football game."

"Why? Has he got the football?" I chuckled.

"It's not funny. My family is coming to the game, and I'm supposed to watch Billy. If he's not there, my mom will kill me."

Shirley shuddered and turned a little green around the gills (or where her gills would've been, if she'd been a fish).

"There is one thing," she said. "At breakfast he said he had to meet with someone named Herman." She looked down. "I think Herman's nickname is Monster, or something like that."

The first case of a new school year, and already things were looking bad. The last time Shirley saw her little brother, he was talking about meeting a Gila monster named Herman.

And most first graders would rather spend summer vacation in a box with the bogeyman than spend a few friendly minutes with Herman the Gila Monster.

It was going to be a long day.

2 Sing a Song of Stinkbug Pie

If you've never met a Gila monster, let me tell you: They are tough customers. They're big, strong, and dumb, and they have really bad breath. Seriously. You wouldn't want to kiss one.

Oh, and one other thing: They're poisonous.

Of course, I didn't tell Shirley her little brother had gone to meet a poisonous goon the size of a refrigerator. Instead I said, "Herman, huh? Do any of Billy's little friends know Herman?"

One of Shirley's eyes rolled back as she thought about it. The other eye kept looking at the ground. I shuddered. What a creepy habit.

But then, we geckos lose our tails sometimes, so I guess I shouldn't talk.

"Billy
has
been hanging out with the Rat Sisters lately," she said. "Maybe they'd know about Herman."

The Rat Sisters are a couple of sweet girls who like to pull the wings off flies and make umbrellas with them. With the wings, I mean. I made a note to see the Rat Sisters at lunch.

And thinking of lunch reminded me of my fee.

"Will you take the case?" Shirley asked.

"That depends," I said. "Can you afford me? I get a hundred bucks a day, plus expenses." I had read that in a detective book somewhere.

Shirley coughed. "I can afford fifty cents a day," she said.

"Shirley, you jest," I replied.

"Look," she said. "My dad is a good cook. Maybe I could just feed you lunch for a week."

"What's so funny about that? Some of the world's best chefs are men, andâ"

My stomach growled. "I'll get right on the case," I said.

I stood up to go, and stepped around the aquarium. But just then, Old Man Ratnose glared at me from his desk at the front of the room.

"Chet Gecko, where is your reading book?" he demanded.

"Teacher, it's a mystery to me," I said. Mr. Ratnose bared his front teeth. I whispered to Shirley, "I'll start at recess."

She kissed my cheek. Then Shirley turned and wriggled back to her desk.

I wiped the cooties off my cheek. Dames. What's a guy supposed to do?

The bell rang. Recess. I strolled down the hall to Billy's classroom. Screaming first graders tumbled over each other, racing out the door toward the playground.

They were headed for swings and slides. Those carefree kids.

I had bigger bugs to fry.

I had to get a look at Billy's desk. It could hold a clue to his disappearanceâor a wad of forgotten homework and moldy socks.

Only a true detective could tell.

I hid behind a razzleberry bush and waited for the teacher to leave. There she was: the great horned toad, Mrs. ToadenâOld Toady to those who had survived her class.

Years ago kids used to whisper that she rolled in the vats of Jell-O before the cafeteria served it.

Nothing was ever proved. But you couldn't help wondering about the green blobs on her dress.

"Come along, you little runt!" said Mrs. Toaden to a straggling first grader.

But he wasn't moving fast enough, I guess. She gave him a friendly punt to speed him up. The kid sailed between two of the posts that lined the covered walkway. Field goal.

Sooner or later he would learn. Never stand between a teacher and her Jell-O.

Old Toady trundled off. I eased toward the door, with a wary eye on Mrs. Toaden. Just as I reached for the doorknob, she stopped dead in her tracks and turned around.

Fa-zip!
I barely had time to scramble up the wall, out of sight. Sometimes it pays to be a lizard.

Old Toady waddled back to the classroom like a duck on a hot date. She locked the door, then made tracks toward the cafeteria.

I slithered down the wall and tried the knob. Locked tight. Glancing up and down the hallway, I slipped the point of my tail into the keyhole and wiggled it around.

I tried the doorknob again. This time the lock's tumblers clickedâon my tail.
Ouch!
But the doorknob turned.

I slipped inside and eyeballed the dark classroom.

It hadn't changed much in the years since I'd been there. It still smelled of chalk, and fear, and stale graham crackers. I looked out across the rows of pink plastic desks.

A Comedy of Heirs by Rett MacPherson
Heirs of Grace by Pratt, Tim
Hung by Holly Hart
It's No Picnic by Kenneth E. Myers
Death Times Two (The V V Inn, Book 3.5) by Ellisson, C.J., Brux, Boone
Under His Kilt by Melissa Blue
Briar Rose by Jana Oliver
Two Fridays in April by Roisin Meaney
Postcards from a Dead Girl by Kirk Farber
Urban Renewal by Andrew Vachss