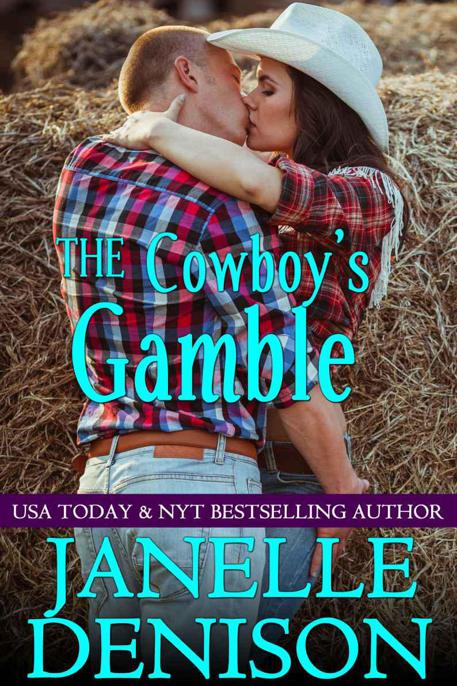 All right reserved. No part of this may be used or reproduced in any manner whatsoever without permission except in the case of brief quotations embodied in critical articles and reviews.

This book is a work of fiction. Names, characters, places and incidents are either products of the author’s imagination or used fictitiously. Any resemblance to actual events, locales, or persons, living or dead, is entirely coincidental. All rights reserved. No part of this publication can be reproduced or transmitted in any form or by any means, electronic or mechanical, without permission in writing from Author.

THE COWBOY’S GAMBLE was originally written as a Harlequin Romance in 1998 (as Bride Included), and is much sweeter and more traditional in tone than my current books. I’m thrilled to have the rights back to this book that has been out of print for years, and I’m equally thrilled to share some of my earlier novels with my readers.

This book was originally written at a time when cowboys, marriages of convenience, and secret babies were a very popular theme in romance novels. I’ve made a few changes to update certain aspects of the story, but the classic tone remains the same.

I hope you enjoy Seth and Josie’s story!

“M
om!” Josie McAllister’s ten year old daughter, Kellie, burst into the kitchen, her wide green eyes filled with panic. “There’s a big man on a horse riding across the pasture. He’s headed toward the house and he looks mean!”

Josie frowned and washed her hands, sticky from the biscuits she’d just cut out for dinner. “Are you sure it’s not one of the ranch hands?”

“I’m sure!” Kellie’s chest heaved with panting breaths and her face was flushed, as if she’d bolted across the hundred yards separating the stables from the main ranch house. “I’ve never seen him before!”

Josie wiped her hands on a terry towel, a twinge of uncertainty rippling through her. It was Sunday, and even though her foreman, Mac, usually stopped by to check on the stock, the rest of the hands spent the day with their families. She’d heard Mac pull his old beat up Ford out of the drive over an hour ago, which meant she and Kellie were alone.

Normally, that wouldn’t be a cause for concern. She’d lived in this house her entire life, and not once had a stranger or drifter threatened her or her father. She trusted the men they’d hired, and had been lucky in that respect.

Tears filled Kellie’s eyes, and she tugged urgently on her arm, gaining her attention again. Josie wanted to believe her daughter was just being overly dramatic, but Kellie had never been the theatrical type. She was shy and mild mannered, and had certainly never been prone to hysterics before.

Tossing the hand towel onto the counter, she gave her daughter a reassuring smile. “Come on, let’s go see who it is.”

Instead of opening the front door as she’d normally do to greet a visitor, she gave into caution and pushed back the cream shears covering the window in the entryway. She glanced out just as a man dismounted a beautiful chestnut down by the stables and draped the horse’s reins on the hitching post.

The man
was
big—at least six feet two with wide shoulders that tapered into a trim waist, lean hips, and muscular thighs. Even from this distance she could see he was physically fit, and even though he hadn’t turned around so she could see his face she instinctively knew he wasn’t one of her men. None of her ranch hands had a presence like this cowboy, a natural air about him that commanded respect and authority.

He turned and strode purposefully toward the main house. Still, she didn’t recognize him, but then the brim of his black Stetson cast shadows over his features. He wore a blue striped western shirt and a dark pair of jeans with a heavy belt buckle cinched at the waist.

“Mom, who is he?” Kellie whispered from beside her, as if the man had the ability to hear them.

“I don’t know-” The rest of her sentence caught in her throat as he pushed his hat back on his head, finally offering her a glimpse of his face. Everything inside her went cold, like the biting chill that swept through the Montana mountains in the winter.

Seth O’Connor
, the boy who’d tormented her throughout grade school, in high school had scorched her with kisses she’d never forgotten, stolen her virginity and her heart, then had spurned her, nearly destroying her in the process. That had been eleven years ago, and even though they hadn’t spoken to each other since that day that had irrevocably changed her life, she’d seen him around town. He never looked her way, never gave any indication that she existed for him, or that she’d ever meant anything more to him than the revenge he’d extracted.

She closed her eyes to block the painful memories. They’d been neighbors all their lives, her father’s property adjoining Seth’s father’s land. Nearly a thousand acres separated their homesteads, and given the feud that had kept both families in contention for over seven decades, the chasm could have been the width of two continents.

Kellie’s worried voice reached her, pulling her back from the past. She blinked her eyes opened and her stomach lurched when she saw that Seth was more than halfway across the yard. His face looked grim, his stride quickly eating up the distance.

He didn’t look like he was here on the Golden M for a social call. Feeling threatened like never before, she darted into the living room, grabbed the key above the glass enclosed cabinet displaying her grandfather’s rifles, and inserted it into the lock. One sure twist and the panel opened. She grabbed the rifle on the rack in front of her, yanked opened the drawer beneath for ammunition. In less than fifteen seconds the rifle was loaded and she was heading back toward the front door.

“Go up to your room and stay there!” Josie ordered, and waited while her daughter obeyed and was safely on the second landing before she walked out onto the porch and lifted the rifle, bracing the butt firmly against her shoulder and taking aim at the man’s heart. “Stop right there, O’Connor.”

To his credit, he immediately halted, putting him ten feet away from the porch steps and too close for Josie’s comfort. His jaw clenched. He didn’t like that she had the upper hand—she could see it in the narrowing of his eyes, the subtle tensing of his cowboy-honed body.

Their gazes met, his diamond hard and just as blue as she remembered, like the rippling, crystalline water in the north end pasture’s creek. Eyes she’d once thought of as kind. Eyes that had seduced her with the sweet promise of being desired and cherished.

It had all been a ruse.

Her finger tightened on the trigger. “Get off my property,” she said succinctly.

He lifted his hands to his hips, his stance deceptively loose. “Why, Josie, darlin’, I think you have that all wrong.” He was all drawl and cowboy charm, but his smile held a hint of danger. “It’s
my
property.”

What in the world was he talking about? She looked closer, searching for signs that he’d become a drunk like his father had been. He looked totally lucid. “Your property ended miles ago. I suggest you haul your ass back to your horse and leave before I shoot you for trespassing.”

“Tsk, tsk,” he said with a cocky, challenging air that caused a flicker of apprehension to crawl up her spine. “That red hair of yours sure does match your temper.”

Hating his mockery, and furious at his gall, she lifted the barrel of her rifle a foot and a half and pulled the trigger, clearing the hat right off his head. He instinctively ducked, but seconds after the fact, then slowly straightened, his mouth gaping in shock. She experienced a moment of satisfaction to see that he’d paled beneath that nice tan of his.

His shock gave way to pure fury. It ignited in his gaze and seemed to coil within his body. With the hot July sun glinting off his dark brown hair, he looked like a dangerous outlaw. “God dammit, Josie!” he exploded. “You could have killed me!”

“Could have, but I didn’t want to kill you, just give you a final warning.” She chambered in another round and slowly lowered the barrel of the rifle to the zipper of his jeans. She smiled, oh-so-sweetly. “Next time I won’t be so gracious.”

His blistering curses filled the air. With a low, enraged growl he charged up the stairs, calling her bluff. Her heart leapt in her throat, and the first frisson of alarm rippled through her. She might have held the gun, but she’d never truly harm him, despite her threats. She only wanted him to leave.

He gained the porch and stopped, a feral smile curving his mouth. Then he started toward her, slow and predatory like. For every step he took forward, she went back, until her spine slammed against the side of the house and there was nowhere left to go.

He jerked the rifle from her grasp and tossed it aside. It hit the wooden floor with a loud crash and skittered to the opposite side of the porch. Refusing to cower like some helpless female, she abruptly came at him, fists flailing. Surprise registered in his eyes just as she clipped his jaw with a punch. He grunted in pain, and in the next instant caught the left hook sailing his way. His fingers circled her wrist, brought her hand down and turned her around, tucking her body securely in front of his. He let go of her hand and wrapped both of his strong arms around her middle, holding her immobile.

They were both breathing hard from the fight. Josie struggled, but his muscular body and his firm hold was no match for her. She was trapped, weak and defenseless. And she hated that it was Seth O’Connor who provoked those vulnerable emotions.

He shifted his weight behind her, and she became all too aware of their intimate position . . . his broad chest pressing against her back and the way his pelvis tucked against her bottom.

She swallowed, hard. She’d worn an old pair of cut-off shorts today, along with an equally old blouse she’d haphazardly knotted just beneath her unbound breasts to keep cool. Where his corded forearms were braced around her mid-section, her bare skin burned. The rough material of his jeans scratched the back of her thighs and the bend of her knee.