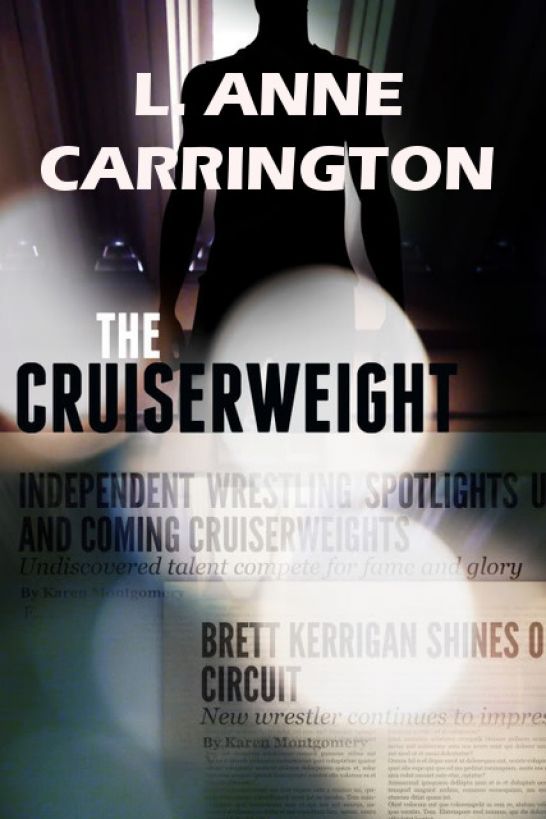 This is a work of fiction. Names, characters, places,
brands, media, and incidents are either the product of the author's
imagination or are used fictitiously. The author acknowledges the
trademarked status and trademark owners of various products
referenced in this work of fiction, which have been used without
permission. The publication/use of these trademarks is not
authorized, associated with, or sponsored by the trademark
owners.

This ebook is licensed for your personal enjoyment
only. This ebook may not be re-sold or given away to other people.
If you would like to share this book with another person, please
purchase an additional copy for each person you share it with. If
you're reading this book and did not purchase it, or it was not
purchased for your use only, then you should return to
Smashwords.com and purchase your own copy. Thank you for respecting
the author's work.

For Brian and Paul (aka The Hooliganz), who
inspired the excellent adventures in my writing this
book.

To every man and woman who risked their bodies
and lives in the squared circle to entertain us each
night
—
whether it is a local
independent company or the world’s largest promotion.

To those aspiring wrestlers who dream of making
it, and fans who love the sport and its stars, I thank
you.

Special thanks to Tracey Washington (aka Irin)
for designing
The Cruiserweight’s
front cover, Tim Hewston
le Roux and his staff at Night Publishing, for all their hard work
and believing in me.

Getting psyched was Brett's specialty, the kind
of madness he needed for the championship. Tonight, he was
wrestling Big Mac, one of the strongest contenders, and needed to
be ready.

He was completing three hundred push-ups when
the small locker room’s battered door swung open. “Five minutes,
Kerrigan,” one of the assistants said. “You’re on in
five.”

“Yeah!” Brett grunted from the floor on toes
and fingers. “Thanks, Randy.”

The door slammed. He counted out three more
pushups, “98
…
99
…
100!” He
bounced to his feet. One of the smallest cruiserweights, Brett had
an established reputation as the federation’s fastest wrestling
superstar.

When his entrance music played, Brett sprinted
with confidence past an excited crowd, his heart racing, ready to
face the battle which lay ahead of him. The fans were on their
feet, jeers ringing through the building as lights shone on his
undersized physique.

“You suck!” a few fans yelled from the front
row.

He picked up a microphone and taunted them in
response. “Your mom sucks
and
swallows. I did her last
night!”

“Sorry, I just dig chicks. Thanks for the
offer, though.”

He was about to speak again when Big Mac’s
music blared. Bodies leaned forward and attempted a closer look as
the massive wrestler made his way to the ring, his eyes on Brett
the entire time.

“Not a problem, my friends,” he replied through
his own microphone. “I’ll send Kerrigan crying all the way back to
his mama.”

“Mac can send anyone away just by his body odor
and showing his ugly face,” Brett spat from the ring. “You want a
piece of me, Big Nose?”

“I’ll get more than just a piece, short
ribs.”

Brett’s body tensed and his pulse soared, ready
to fight. He flipped Mac the middle finger. “Come and get me, fat
ass!”

The six-foot-six, two hundred and ninety-pound
contender threw down his microphone, dove in the ring, and grabbed
Brett. “You asked for it, boy! You‘ll live to regret running your
big mouth, if I let you live
that
long!”

Scratching Mac's eyes, Brett returned blows,
punches, and kicks. He felt considerable pain, but refused to show
it. Furious, he gritted his teeth and attempted a high
kick.

“Now, now,” Mac said with a mocking smile. “You
must be
this tall
to kick the big man.”

Brett’s frustration with his opponent
increased. “Enough of the short jokes, asshole!”

He went for a second high kick. Mac countered
by grabbing Brett’s leg, causing him to lose his balance, and his
nose smashed into the mat.

Mac wasn’t finished. He hoisted Brett above his
head. “Time to go for a ride, but this isn’t the kiddy
one!”

He smashed Brett into the center of the ring.
The match was over in less than five minutes. The bell rang.
Minutes later, he held his championship belt in the air as the fans
stood and bayed their ovation.

Mac descended from the ropes and went over to
Brett, who was sprawled on the mat. “Of all the little losers in
this company, you’re by far the biggest! Not bad for someone who
wanted to make a ‘big impact’!”

Once an exhausted Brett returned backstage and
cleared his head after the bout, he came face to face with Mac,
their eyes locking.

"Does a bear shit in the woods?"

"Hope I wasn't too rough on you out
there."

"Are you kidding? I've been roughed up more by
my baby sister.”

Mac gave him a loud slap on the ass. “You’re
the media’s star tonight. Everyone‘s wondering how the hell you
managed to stand up to me without getting killed.”

Brett
was
the media’s main focus that
night for his outstanding performance during the championship bout.
He had achieved the unthinkable of lasting against Big Mac, despite
losing the contest. Among the reporters watching from the sidelines
was Karen Montgomery.

After leaving the arena, Karen made her way to
a nearby club. She managed to find a quiet corner and dialed her
night editor, Eva Moore.

“Did you get any good quotes?” Moore asked, a
code for wondering if Karen had met Brett.

“I did from a few of the people who competed
tonight. If you’re wondering about Brett Kerrigan, the answer is
no.”

“I don’t think Brett is the type who cares
about women flashing. Even if he did, I doubt he would bother with
some random woman from the media showing her boobs. Anyone who has
to resort to such tricks for attention isn’t taken
seriously.”

“I was kidding. Keep on trying, honey. Maybe
you’ll get lucky someday.”

“Eva, I’ve attended shows where Brett appeared
and they ended with the same results. I don’t expect upcoming ones
to be any different aside from doing my job. I may have to break
down and ask the big boss to arrange a one-on-one interview. My own
system doesn't seem to be working.”

“Why don't you talk to Sullivan? I'm sure he'd
arrange something instead of you going through so much trouble
alone to get an interview."

"I wouldn't be comfortable asking such a favor,
especially with me being a fan of Brett's."

"You have no idea what the chief would do for
his writers. Meanwhile, I look forward to seeing your story. Don‘t
forget the midnight deadline.”

“I’ll have it to you before. Thanks for
everything."

“Damn, check out the rack on that redhead,
Pete!” one wrestler called out to another as the group looked over
women who were patronizing Metropolitan, an upscale club often
frequented by visiting athletes and celebrities in addition to the
local regulars.

“You should hook up with her, Billy. You always
did like babes with big tits.”

“Yeah, I’ve never bagged a redhead. Hey, Mac,
see that group of blondes over there?”

“Which one do you think would be a good
lay?”

“Don’t know, man, but the tall one is sexy as
fuck. Think you can get her number for me? There’s free beer in it
for you.”

“Now there’s an offer I won’t turn down! Be
right back, big guy.”

Brett was turned off by their behavior, but
said nothing. He wasn’t in the mood for “little gentleman” jokes
from Mac. Shy around women, he still had standards. From the time
he was twelve, Brett preferred zaftig females. He figured his
tastes were a result of having some resounding fear of gorgeous,
skinny, upper class women. He couldn’t even ask one the time of
day.

Now loosened by a few beers, he attempted to
flirt with a pair of twins with killer figures. “Hello, hello,
hello."

“Ugh,” the first twin replied, leaning away
from him.

“Relax, I‘m not here to cause any trouble.
Let’s be friends.”

A man stormed over and confronted Brett before
he could proceed further. “Is there a problem?” he asked, glaring
at Brett.

“We think this creep is hitting on us, Nathan,”
the second twin answered.

“I was just being friendly,” Brett
said.

“I suggest that you take your ‘being friendly’
somewhere else,” the man said. “These ladies don’t want you
here.”

Brett heard his heart thumping and felt his
skin prickle. The hairs rose on the back of his neck. He was driven
into peak confrontation mode, as if he was preparing for another
match.

“Oh yeah?” he asked in a sarcastic tone.
“Apparently you don’t know who
I
am or you wouldn’t be
acting like a big shot.”

The man laughed, “Is that a threat? You think
I‘m scared of
you?
You‘re nobody!”

“I don’t threaten without following through,
asshole. Maybe we can take care of business outside.”

“Outside?” the man asked, removing his jacket.
“I can mop a loser like you up right here, right now.”

The stranger laughed louder. “
Brett?
What kind of name is that?”

“Let me show you, asshole.”

"You threatening me, boy?"

"Boy? I happen to be a
real man
, as
you're about to find out." Brett jabbed him with his
finger.

The man took a step forward, making an attempt
to be intimidating. “You looking for a fight,
boy?”

The man’s feat didn‘t have the desired effect.
In addition to making an impact inside a wrestling ring, Brett
proved to a gathering crowd he held his own battling men larger
than he was outside of a professional setting.

Brett threw the first punch, connecting. His
attacker staggered back, surprised by the force of the blow, before
he came back and bore down on Brett like a missile. A bolt of
energy pulsed out from the other man’s hands and the swing missed
Brett, who expected it. The crowd whistled, hollered, and even
tried to pull the two men apart. Brett flew toward his adversary
with a well-executed kick.

His assailant was quick, ducking his
counter-attack. Brett attempted several more swings and kicks. His
shin connected with the back of the man’s ankles and swept his legs
clean out from underneath him. With a grunt of annoyance, the man
lost his balance and fell. Not giving in to his smaller nemesis, he
rose back. With a rapid move, the man ducked right before Brett’s
fist flew towards his chin.