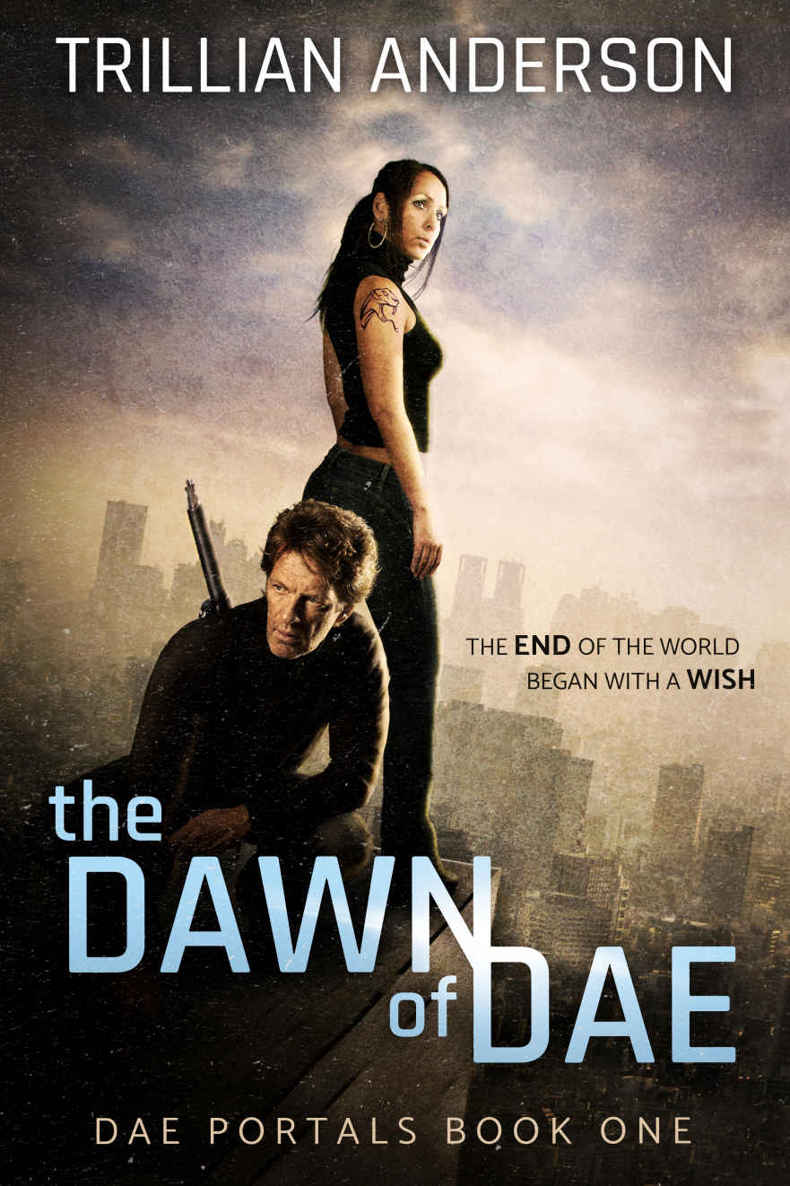 The Dawn of Dae

The chance to attend college is just what Alexa Daegberht needs to break out the mold of her caste. If she can become a Bach, she can escape the poverty she’s endured ever since her parents died when she was five. Only through education can she rise above her birth caste–and she knows it.

All of her plans fall to dust when she opens a portal within her refrigerator, turning her macaroni and cheese casserole into a sentient being. By dawn the next day, the mysterious dae have come to Earth to stay. Hundreds of thousands of people vanish into thin air, and as the days pass, the total of the missing number in the millions. Some say it’s the rapture of the Christian faith.

Alexa knows better: their dae ate them, leaving behind nothing more than dust as evidence of their hunger.

As one of the unawakened, she doesn’t have a dae, nor can she manifest any forms of magical powers. She’s lacking the innate knowledge of what the dae are and what they mean for the world. Now more than ever, she is an outsider. Her survival hinges on her ability to adapt to a world she no longer understands.

Unfortunately, one of the dae has taken notice of her, and he’ll stop at nothing to have her. Alexa’s problems pile up as she’s forced to pick her allegiances. Will she submit to the new ways of the world? Will she become some monster’s pawn? Or, against all odds, can she forge her own path and prove normal humans can thrive among those gifted with powers once the domain of fantasies and nightmares?

All rights reserved. This book or any portion thereof may not be reproduced or used in any manner whatsoever without the express written permission of the publisher or author excluding the use of brief quotations in a book review.

For more information or to contact the author, please visit
TrillianAnderson.com
.

My first real memory of my parents was also my last.

It was the refrigerator’s fault I remembered. I should’ve known better than to expect new appliances in my new apartment; I was lucky to have appliances at all. I sure as hell couldn’t afford to buy new ones.

The refrigerator, however, was a problem. Every time I looked at it, I remembered—and my first memory of my parents was how I, Alexa Zoe Daegberht, had killed them with a wish.

It was the same refrigerator, right down to its smoke-stained, pebbled surface and its loose handle. The years hadn’t done the damned thing any favors, and I wondered if the door would fall off its hinges when I opened it. Then again, they had built things better when I had been a child.

It was too bad I hadn’t been built a bit better. A lot of things would have been different. It wasn’t my father’s fault no one could touch me without irritating my sensitive skin. It wasn’t his fault he couldn’t kiss my cheek like other fathers could with their daughters.

If you walk out that door, don’t you ever come back.

Because I had believed it, had wanted it, and had prayed for it, wishing on a shooting star that night, I had gotten exactly what I wanted. My parents had walked out the door and left me behind, never to return.

The ocean didn’t like giving up its dead, and planes smacking into the water didn’t leave a whole lot to salvage.

I dropped my bags on the kitchen floor, spat curses, and kicked the refrigerator.

It won; beneath the plastic was metal, and it refused to bend. All I did was crunch my toes, and howling, I hopped around on one foot. Through tear-blurred eyes, I glared at the offensive appliance.

Maybe I could spray paint the damned thing pink; it’d be at least four years before I earned my degree and rank as a Bach, and until then, I was stuck with it. Once I became a Bach, I’d be elevated to a better caste—a caste with a future, and a bright one at that. Once I was a Bach, I could afford to buy my own appliances, and I’d never have to see that make or model of refrigerator ever again. If I scored well enough on the exit exams, I had the slim chance of being accepted for Master training.

I had my entire life ahead of me, and it would be a good one. There was no way I’d let a stupid refrigerator take that from me.

I kept telling myself that, but I didn’t believe it.

I gave up and went for my last ditch resort; if macaroni and cheese couldn’t make things better, nothing could.

I left my apartment to explore my new neighborhood and find work, leaving behind the devil-spawned refrigerator with a week’s worth of macaroni and cheese casserole cooling inside. If any of the other students found out I was surviving on pasta flavored with neon-orange powder, I’d be the laughing stock of the college.

I wanted to create the illusion of having come from somewhere other than the poorest district in the city, and to do that, I needed money. Merit-based students like me paid off tuition and housing in labor; I was doomed to at least four years serving as some professor’s slave. At least I had ranked high enough to have an apartment instead of a closet in the shared dorms, but unlike on-campus students, I was on my own for the basics.

There was one place I knew I could find a job in a hurry: the Inner Harbor. If I had come from any other district, if I had belonged to any other caste, I wouldn’t have needed to turn to Kenneth Smith for work. But Kenneth took in those others wouldn’t and made them do his dirty work.

Unfortunately for me, I was good at doing his dirty work. Sighing, I ducked my head, adopted a brisk stride, and headed towards the water.

Baltimore was a big place, and it took me an hour to navigate my way through the city’s heart, skirting around the fringe I had once called home. On the surface, it was a clean, quiet place with carefully trimmed lawns, neatly pruned trees, and flowers contained in concrete planters.

The scars of rebellion pockmarked the brick buildings, a reminder of the violence Kenneth Smith and his cohorts had stamped out years ago, turning a slum into the elite’s paradise.

Once upon a time, the Inner Harbor had been the entertainment district of Baltimore, a place prone to rioting, a place everyone, no matter what caste, could go and gamble away their money or find other pursuits, many of them illegal. Sporting events were popular—if you could afford the entry fee.

I couldn’t, and Kenneth Smith counted on that. He didn’t want me as a client, anyway.

He wanted me as one of his hounds, a dog of his endless drug war, hunting down his non-paying clients, sniffing out dirt on them, and either luring them into one of his little traps or otherwise acquiring his money. The method didn’t matter; the money did, and that was that.

I hated the Inner Harbor; if I had a pack of matches, I wouldn’t have hesitated to light one up in the hope of burning the whole place to the ground. My temper soured the closer I got to the little townhouse located where the fringe began and the elite’s playground ended.

No one in their right mind would have believed, not even for a moment, that Baltimore’s charming, ruthless, and despicable criminal mastermind lived in such a dingy place, and that was exactly the way Kenneth Smith liked it.

I knocked four times, paused, and because I was in a bad mood, I gave the dark-painted door a solid kick, jamming my already aching toes. I didn’t hop around as I had in my apartment.

One of Smith’s bitches didn’t do something so undignified, not in public.

The pain I wanted; it served to focus my attention and remind me of the misery my boss would inflict if I screwed up. Clenching my teeth to keep quiet, I waited. I heard the thump of someone coming down the stairs, and several moments later, the lock clicked. The door opened, and Smith’s favorite dog answered, glaring at me through narrowed eyes.

I smiled at Lily because I knew it would piss her off. “What do you know? It is! Astonishing. Can I come in, or are we going to put on a show for everyone in the neighborhood? I didn’t dress the part. I left my lacy panties at home.”

I didn’t own any lacy panties, but all things considered, I was going to die a virgin anyway. A kiss on the cheek was enough to give me hives. What would happen if someone tried to kiss me on the
mouth
—or do something far more interesting with me?

Lily snarled something incomprehensible under her breath, stepping back to let me in. “Prissy bitch.”

Blond-haired, blue-eyed, pasty-skinned Lily belonged in a doll shop, but instead of telling her to go back to selling herself on the street like I wanted, I asked, “Where’s the boss?”

“Down in the den. He’s with a guest. Wait in the parlor. He’ll come for you himself, I’m sure.” Lily glared at me, slammed the door, and stomped her way up the staircase to the second floor, leaving me to mind my own business in the entry.

A Life Less Ordinary by Christopher Nuttall
Ex, Why, and Me by Susanna Carr
Desire Unleashed by Savannah Stuart
Degrees of Wrong by Anna Scarlett
The Watcher's Eyes (The Binders Game Book 2) by Holmberg, D.K.
A Hunger Artist by Kafka, Franz
A Cavanaugh Christmas by Marie Ferrarella
Anastasia's Secret by Susanne Dunlap
The Way of the Soul by Stuart Jaffe
Maggie Malone Gets the Royal Treatment by Jenna McCarthy