Convicted of a series of horrific crimes against young women in the upmarket Californian town of Santa Barbara, wealthy playboy Charlie Mendez has fled across the US border into Mexico.

As one bounty hunter after another meets a grisly end at the hands of the murderous drug cartel his family have hired to keep him safe, it seems that Mendez is one fugitive destined to remain beyond the reach of the law. Or at least that’s how it looks until one determined victim persuades high-end security specialist Ryan Lock and his partner, retired Marine Ty Johnson, to take on the case.

Plunged into a nightmare world where no one can be trusted, least of all the authorities, the two men discover a city more deadly than any war zone. Worse still, when an attractive young American tourist is snatched from the streets, it appears that Mendez has returned to his old ways. But in order to stop him before he claims another victim, will Lock and Ty have to pay the Devil’s Bounty? 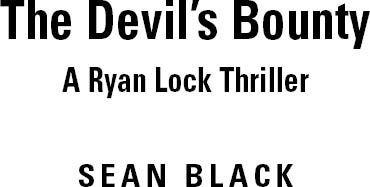 For Gordon Gray, a true Trojan

It was eight o’clock on Friday evening and the bars and clubs that ran the length of State Street were already filling up. Three frat boys wove an unsteady path out of the James Joyce Irish bar, before collapsing in a good-natured heap on the sidewalk where one of them grabbed his two buddies in a fraternal headlock. Outside the Velvet Jones nightclub, a bouncer carded two young co-eds, making a big show of examining their no doubt fake IDs before unclipping the red rope and letting them inside. He watched as they wiggled past him and into the club.

Up and down the town’s main party drag, the same scenes of mostly good-natured youthful debauchery played themselves out, as they had done every year for about as long as anyone in the wealthy California beach community could remember.

Charlie Mendez stood on the corner of State and West Haley and surveyed the scene. He plucked a fresh cigarette from the pack of Marlboro Reds tucked into the rolled-up sleeve of his
T-shirt, dug out a Cartier lighter from the front pocket of his jeans and lit up. He pulled the smoke deep into his lungs as he continued to scan the street. A crowd of girls passed, one, a long-legged brunette, turning to smile at him. Charlie gave her his best California-surf-bum smile in return and ran a hand through his thick mop of blond curls. She giggled and looked as if she was about to say something to him, but her friend grabbed her elbow and pulled her back along the street.

Charlie took out the small digital camera he always carried with him for just such opportunities and called after her, ‘Hey, beautiful! Smile!’

The cheesy line and the picture-taking would have earned most men of Charlie’s age a raised middle finger or a look of disgust, but Charlie wasn’t most men. In his late teens and twenties, he had been good enough to work for a time as a model in New York, and despite his lifestyle, his looks were still merely faded rather than entirely departed. His hair and teeth were perfect, and his face, beaten by sun, sand and surf, was rugged.

The girl blushed, whispering something to her friend, then walked on with the rest of her group.

He gazed at the image on the screen. She must have been startled by the tiny flash because her eyes were closed. It gave him a shiver of anticipation for what might come later.

These were the nights he lived for. There were many things he loved about the town where he had grown up, but perhaps none was greater than the opportunities it afforded a man like him. Every year the seniors left, and every year the freshmen arrived. The town was in a state of constant transfusion and replenishment. But Charlie remained constant. Watching. Waiting. Choosing his moment. Always ready to add to his collection.

He glanced at his wristwatch, a very un-surferlike five-thousand-dollar Rolex Oyster Submariner. The night was young. He would go home and get things ready. Then, around eleven, he would return to see what the rest of the evening held for him. Tomorrow the students would begin to drift away, and over the following few days Santa Barbara would shift from college town to tourist town. The people who lived in LA or San Francisco but kept summer homes in the area would arrive. Couples. Families. None of them any use to him. They would crowd the beach he surfed every morning and generally make his life miserable.

That meant he had to make tonight count. He had to make it special. Tonight would have to sustain him through the long, lonely months of summer before fall semester when fresh meat arrived.

He turned and walked back to his car, a low-slung red Aston Martin convertible. He jumped into the driver’s seat, gunned the engine and took off, heading northwards up the coast, eager to set the scene for what lay ahead.

HEART POUNDING, MELISSA
Warner pushed her way through the crush of bodies towards the front of the stage. Almost directly above her, a sweet-faced black kid, dressed in baggy jeans and an LA Lakers top, was singing about
bitches
and
hoes
while two similarly attired DJs worked the decks behind him. Either side of the rapper, a dozen female dancers, in bondage gear and lingerie, gyrated in apparent ecstasy as the words poured forth.

Y’all know that hoes and bitches
,

They only after one thing
.

Two spotlights zigzagged across the mass of bodies filling the arena. The bass pounded so hard from the speakers that Melissa could feel the floor beneath her moving in time with it. The rapper grabbed his crotch with one hand, and waved a roll of dollar bills
in the other. The crowd of mostly white suburban teenagers screamed and hollered their endorsement of the lyrics.
Lyrics that reduced their sisters and mothers and girlfriends to what exactly? To prostitutes. To people who served only one function. To pieces of meat
. Stay focused, she told herself.