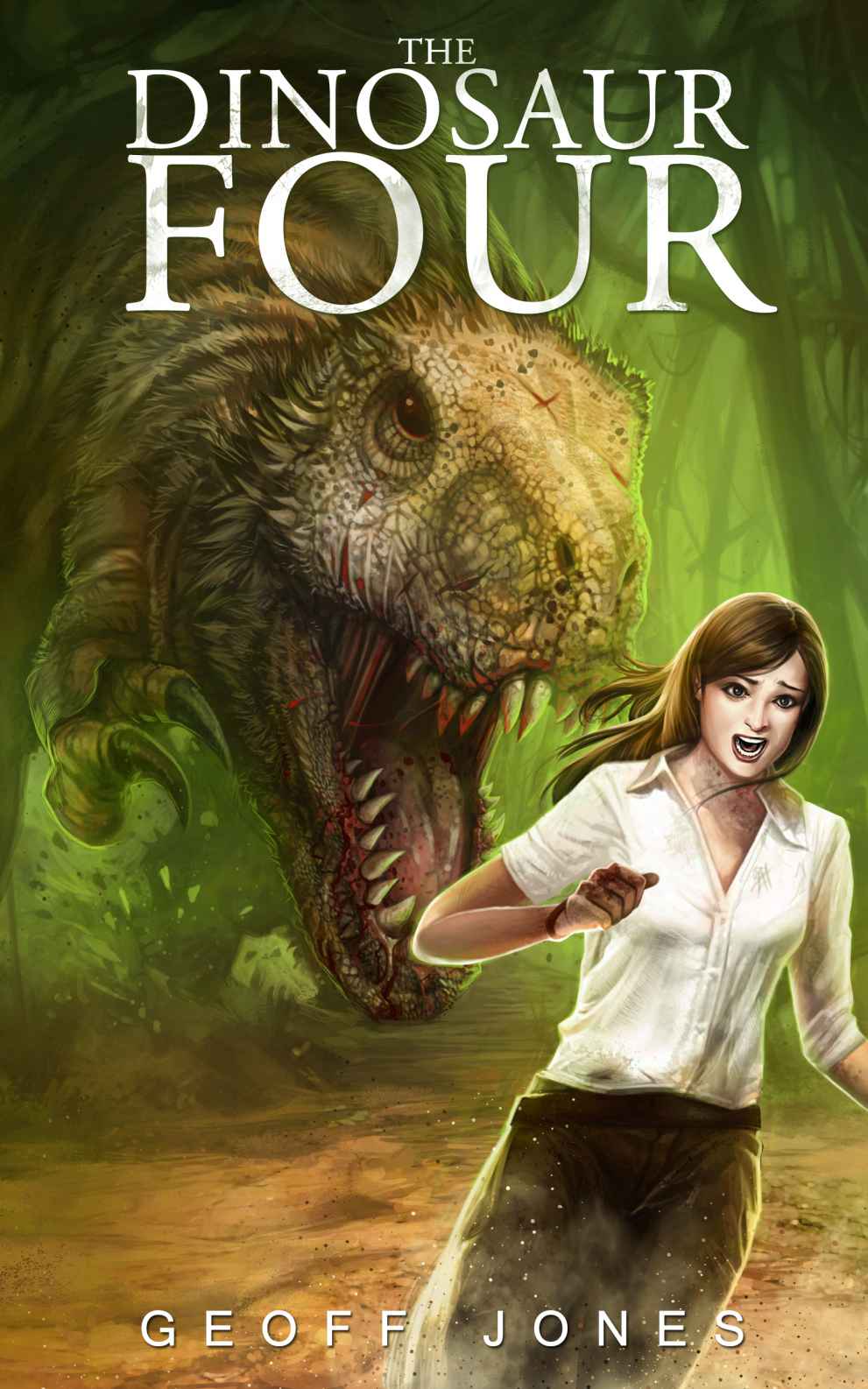 THE DINOSA
UR FOUR

III – DAY OF THE DINOSAUR

All Rights Reserved. No part of this publication may be reproduced, distributed, or transmitted in any form or by any means, including photocopying, recording, or other electronic or mechanical methods, without the prior written permission of the author.

This book is a work of fiction. All characters, locations, and situations are the product of the author’s imagination. Any resemblance to actual persons, living or dead, locations, or events is entirely coincidental.

For
Mom and Dad

Thank you
for teaching me the love of stories

and
for believing in me.

The ticking sound began while
Lisa Danser counted out change at the register.
Dammit, what now?
Strange noises usually meant something was about to break. She had sunk every last dollar into The Daily Edition Café and could not afford any serious repairs. The sound made her think of a pilot light, but she couldn’t remember anything in the store that used gas.
If it’s a gas problem, won’t the city take care of it?
Considering all the fees and taxes she paid, they better.

She remembered the cases of wine in the back closet. If the city sent someone out, would they care about the alcohol on the premises? Lisa had recently applied for a liquor license, hoping to sell wine and cheese in the afternoon, when business was slow. She didn’t think anyone would mind that she had alcohol in the building as long as she wasn’t selling it, but she was not certain.

Lisa looked over at her barista, Beth,
who chatted away with a tall man in a UPS uniform while she tamped grounds in an espresso filter. The law said that Beth was old enough to sell wine, even though she was still a year away from being able to buy it.

The delivery man smiled at Beth
. Attractive baristas sold more coffee and earned better tips. Lisa knew it was discriminatory, but she only hired cute young women. Beth fit the bill. She was thin, flirtatious, and bubbly.

“Good enough. Almost done with my route.”
The delivery man had a friendly face.

“Not too many, but I still have one that’s pretty large and has to go up three flights of stairs.”

“
Sorry.” Beth turned off the espresso machine. “But it sounds to me like you are complaining that your
package
is too large.” She shook her head and made a
tsk tsk
sound in mock contempt.

His eyes grew wide and his brown skin darkened as he blushed. Lisa froze for a moment, wondering if the girl had crossed a line, but the man broke out in warm laughter. Lisa’s current customer, the woman waiting for her change, gave the UPS man a sidelong glance and pressed her lips together.

Lisa really wanted a classier establishment, where the staff did not sass the customers. She wanted to charge a little more and begin paying off her debts. Once the liquor license came through, Beth would need to act more professionally.

Two men standing in line craned their heads, also looking for the source of the sound. At least she wasn’t imagining things. This made Lisa feel better until she recognized one
of them, a regular who always seemed on the verge of asking her out. If he ever actually did, she owed Beth ten dollars. She hoped he wouldn’t. She did not know how she would answer him. The guy was decent looking and seemed nice enough, but he repeated the same conversation day after day.

The UPS man stopped chatting with Beth and looked from side to side as the noise grew louder.

Distracted, Lisa lost count of the bills in her hand. She began again. This earned a loud exhale from the woman waiting for her change. She wore a tailored blazer and designer jeans. Lisa could tell she would not be leaving a tip.

The sou
nd
seemed to come from all around. No matter how she turned, Lisa could not pinpoint the source. “Ok, what
is
that?” She threw the money down in the register and looked out the windows on the front and left side of her café, hoping to spot something that might be causing the noise. As usual, she saw only the intersection of two streets right near the edge of downtown Denver. Bright light from the low morning sun reflected off the windows on the building across the street.

The
woman in the blazer looked down at the register and up at Lisa. Her mouth formed a small round circle and she looked as if this was the first time in her life she had ever been ignored.

The hair on Lisa’s neck stood on end as the ticking grew louder. Suddenly
the noise ended with a pop. It felt as if all sound had been sucked out of the air.

Outside the plate glass windows, the city vanished.

T
he lights went out, plunging the room in darkness. Lisa screamed, emitting a small squeaky sound. Battery-powered emergency halogens came to life above the front door, providing enough light to see around the room, but not nearly enough to make up for what they had cost. One of the men in line gasped, a high hitching sound. It was the regular, Lisa realized.

The building
lurched to the left. Lisa had never been in an earthquake before, but this had to be what it felt like. Several people screamed now and Lisa wondered if her insurance covered earthquakes.

A chunk of plaster fell from the ceiling and hit
Lisa’s shoulder, ripping her sleeve and slicing shallow grooves in the skin of her arm. She sucked air through clenched teeth and rubbed the cut.

The building shifted
again and a gust of air hit Lisa in the back as something large collapsed behind her. Two joggers sitting near the front of the store stood and moved toward the door.
Don’t go out there
, Lisa thought. That was wrong, though, wasn’t it? You were supposed to get outside during an earthquake. Yet for some reason it seemed like a terrible idea. Before the couple reached the door, one of the six-foot tall windows exploded in a crinkling blast. They threw up their arms to shield their heads, but most of the glass shattered outward.

“
Shit!” shouted the older jogger. He dragged his girlfriend back to the center of the room.

The door flew open, slamming into the empty window frame, and a young man stumbled in. “I can’t believe it.
Everything is gone! Denver is
gone!
”

The
man ran all the way to the back of the room and moved behind the counter next to Beth. “What the fuck, dude? You want a job?”

He
turned toward the front of the store and the emergency light shone on his face, revealing dozens of small cuts, each a red line of blood.

It
dawned on Lisa why going outside seemed like bad idea. It wasn’t just dark inside; it was dark out there as well. That made no sense. The sun had been up for half an hour.

Lisa
stepped out from behind the counter, careful to close the register first. The bitch in the blazer seemed to have forgotten about her change and now clung to the back of the orange couch which separated the counter from the seating area up front.

Beth followed Lisa, grabbing her arm with two hands
“Lisa, what’s happening?” She was such a toucher. Lisa shrugged her off and walked to the wide window along the left wall. The view normally showed the hotel across the street, with the Starbucks in the lobby. A Starbucks, Lisa often noted, that did a fraction of the business her store brought in.

“Is everyone okay?”
demanded the jogger. He wore running shorts that were too small for him and an angry expression. “Is anyone hurt?” No one answered.

Outside the window, Lisa saw only darkness.

She moved her head around to shift her perspective and realized it was not completely black out there. In the sky above, she saw stars.
Was there supposed to be an eclipse?
Below the window, she detected starlight reflecting off of something. Something moving.

Somehow, in addition to an earthquake and an eclipse, they
were also experiencing a flood. This was impossible. The only water nearby, Cherry Creek, was barely more than a trickle and flowed along the bottom of a canal fifteen feet below street level and two blocks away.

The room shifted again. It only moved a few inches, but it canted at the same time, spilling mugs from the shelves and more plaster from the ceiling. Lisa turned to see a large box containing an
expensive espresso machine slide from a high shelf and land on the knee of an old woman sitting alone. The woman moaned, long and low, as she doubled over her leg.
That’s going to be an insurance claim
, Lisa thought. She turned back to the window, her stomach rolling.

“
Would somebody please tell me what the fuck is happening?” demanded the running shorts man. Again, he was ignored, but this time he huffed to express his disappointment. The other jogger, the young woman with the red pony-tail, cowered against him.

Lisa
studied the dark shapes outside. She shielded her eyes from the glare of the emergency lights. Below the starry sky, she saw a jagged line that looked like the tops of trees. She wanted to ask,
is that a jungle out there?
but she didn’t want to sound stupid. Instead, she let her jaw hang open and reached for the window, pointing.

Just before her finger touched the glass, a twenty-foot section of wall separated from the building and fell outward. The
window exploded in a spider web of cracks as it hit the water and disappeared into the rushing current. The room filled with the sound of the flowing river.