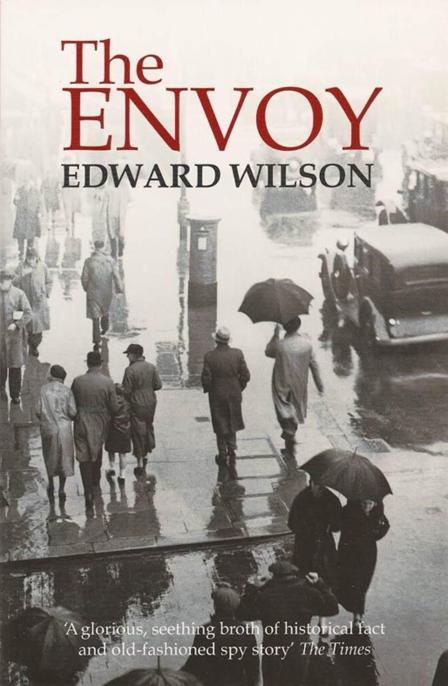 For Julia, Tim and Edward

She’s all States, and all Princes I;
Nothing else is;

Who is so safe as we? where none can do
Treason to us, except one of us two.

Under the spreading chestnut tree,
I sold you and you sold me.

May, 1948. In a small posting, like the one in Nice, the consul is on call twenty-four hours a day. Kit was asleep in his one-bedroom apartment on the rue Marengo. It was a very nice dream
involving
a passionate mouth. The phone rang just as things started to get interesting. Kit rubbed his eyes and let it ring. He fumbled for the bedside lamp. He turned it on and looked at the alarm clock: two a.m. He let the phone ring three more times; they could wait. He assumed it was the
commissariat de police
, the local cops – yet again – for the US Navy was in port. Kit finally picked up the phone and answered in French. ‘
Bonsoir
, what sort of shit are our sailors causing now?’

There was an awkward pause before the caller spoke. The language was French, but the accent was angry American and wanted to know who was on the phone.

‘It’s me, Kit Fournier. Is that you Mr Patterson?’ Patterson was DCM, Deputy Chief of Mission, at the US Embassy in Paris.

‘Yes, Kit, it’s me. You didn’t sound like you were fully awake.’

‘Listen, something serious has happened and you need to get moving. Is the car gassed up?’

‘I think so – but I’ve got some spare cans anyway.’

‘There’s been an airplane crash in the Ardèche – and it looks like a US citizen may have perished. The gendarmes have found an American passport naming the holder as Lady Hartington.’

‘Sounds like she’s a Brit. Maybe the gendarmes got it wrong. They don’t always recruit geniuses you know?’

‘No, Kit, I think they got it right. Lady Hartington used to be known as Kathleen Kennedy, Joe Kennedy’s daughter. Her British husband was killed in the war, but she kept the title. Did you ever meet her?’

Kit cast his mind back. He was still at school. It was a late spring day in 1940 and America was still at peace, but the Brits were getting hammered in France. ‘Yeah, I did meet her, but only briefly. They came down for the Maryland Hunt Cup. Kathleen and her brother Jack were staying at Zeke Coleman’s place.’

‘Do you remember her well enough to identify the body?’

Kit closed his eyes tight and thought, Why me? He hated
dealing
with dead bodies. After a moment, he said, ‘I think so, she wasn’t a great beauty, but she was a bubbly girl.’

Kit ended up giving a lift to the British consul who dozed for most of the first part of the journey. The Brit’s own car, a 30s Citroën, had blown its head gasket. From time to time Kit studied his
passenger’s
face. The burns were hideous; one ear had melted into a jagged swirl like a broken conch shell. Kit assumed it was a war face from a burning ship or plane – or a tank that had ‘brewed up’.

The British consul began to yawn and stretch as Kit weaved his way through the streets of Aix-en-Provence. The pollarded plane trees that lined the boulevards were already in full leaf. Aix smelled of lavender and drains. ‘How are we for time?’ The Englishman’s voice was standard Foreign Office languid, but the vowels were flat and he said ‘uz’ instead of ‘us’. The only English accents that Kit recognised – upper-class and Cockney – were from films. And his passenger certainly didn’t speak either of those. Nor did he sound like the British officers he had briefly encountered in the Far East.

‘I could murder a croissant and a bowl of café au lait.’

Kit parked the car on a square with peeling green benches and a memorial for the ’14–’18 war. An elderly woman wearing a white apron was standing outside the
Café des Sports
. She looked at the
corps diplomatique
badge on the bumper of Kit’s Ford and frowned. The two consuls chose an outside table. The woman’s expression softened when she saw the Englishman’s face. She seemed to know what had happened. When the Englishman ordered for both of them in perfect French his regional accent disappeared. As the woman padded off to the kitchen, Kit turned to his companion. ‘I don’t recognise your accent.’

‘No, in English. Where are you from, if you don’t mind my asking?’

Kit was none the wiser. His fellow consul might just as well have mentioned one of Jupiter’s lesser moons. For Kit, England was just as strange and foreign.

When they crossed the Rhône at Montélimar, a gendarme on a motorcycle waved them down. Kit’s big American Ford stood out like an elephant in the French countryside. The gendarme informed them that the bodies had been removed from the
village
hall at Saint-Bauzille and transferred to the district council offices, the
préfecture
at Privas. The gendarme then saluted and gave them a motorcycle escort for the last twenty miles. Kit was embarrassed by the attention and stares of roadside peasants. The Englishman’s ironic smile made things worse.

Arriving at the
préfecture
, they were greeted with some
ceremony
by a high-ranking gendarme and a very elderly man in a black suit with a Legion of Honour in his buttonhole. The old man introduced himself as the mayor, but everyone else referred to him as ‘the chief’. There were also reporters with notepads, but the gendarme kept them at bay.

Kit and the Englishman were ushered into an office that was lined with dark polished wood. There was a crucifix on the wall behind the desk and a framed military citation describing an action that had taken place in Quang Nam Province in 1886. Christ, thought Kit, this guy really is old. The mayor invited them to sit down. The door opened and an elderly woman in black entered the room bearing a tray of coffee and petits fours. The loose heels of her espadrilles slapped loudly on the
polished
floor. Kit wondered if the
patronne
from the cafe in Aix had somehow followed them – they could have been twins. The woman poured the coffee into Limoges china cups and left. Kit felt engulfed by a wave of happiness and peace. He would have been content to spend the rest of his days in that dark room
listening
to the clock tick and smelling the furniture polish and must of age. He wondered if he could have it all dismantled and re-erected – including the old man and his Legion of Honour – in the garden of his home in Maryland. The ultimate tourist souvenir.

As they sipped the coffee the mayor explained that there were only four bodies, not eight or ten as originally reported. ‘This confusion,’ he said, ‘may have been because this type of aeroplane has seats for eight passengers. But there were only two
passengers
– and with the two pilots – that makes four.’ The old man turned to the Englishman. ‘Three of them were carrying British passports. But you must confirm their identities before we will sign a permit allowing the repatriation of their remains. Are you capable of doing this?’

‘I have been telegraphed detailed physical descriptions of the two pilots – a Mr Peter Townshend and a Mr Arthur Freeman. The passenger, Peter Fitzwilliam …’

The Frenchman interrupted. ‘The passport identifies the bearer as Earl Fitzwilliam.’

‘Yes, that was his title. In any case, Fitzwilliam was a
prominent
figure in French horse racing and breeding. I not only have recent photographs of him, but his trainer is coming down from Paris to help identify the body.’

‘Very good.’ The mayor turned to Kit. ‘And the young lady, how sad. Her passport bears the name Lady Hartington, but it is an American passport.’ The Frenchman sounded like a naturalist describing a rare hybrid butterfly. ‘And I believe her father was a close friend of Roosevelt and a former American ambassador …’ the old man’s eyes flicked to the Englishman, ‘to Great Britain.’

‘And can you identify her?’

‘I knew her personally.’

‘That is very good. Her father is at this moment on the way to Privas – and it might be kind to spare him the pain of seeing his daughter. Her face is …’ The Frenchman frowned and made a gesture against his own face suggesting disfigurement.

Kit felt sick at what he was going to have to do. He was also surprised to hear that Joe Kennedy was in France. Patterson hadn’t mentioned it.

‘We have had to turn our conference room into a temporary morgue. The bodies are now being transferred into zinc-lined coffins that we had sent from Montélimar. It enables them to be packed in ice.’

The old man, reflected Kit, clearly thought of everything

The mayor steepled his fingers and continued. ‘There are no embalming facilities in the region. Personally, I find the practice barbaric and unnatural.’

‘There is,’ said the Frenchman, ‘also the matter of taking an inventory of the belongings of the deceased. We follow strict guidelines. Everything must be witnessed and countersigned.’

‘Thank you,’ said Kit as he finished his coffee. He left the petits fours untouched.

‘When you are ready, you may view the deceased.’

Kathleen’s face wasn’t as bad as the old man had suggested. Her jaw was crushed and bruised purple – and there was a wide gash down the left side of her face. But the worst thing was the way her lips were half open as if trying to utter a cry. Kit could also see that her teeth had been broken and shattered by the impact. He gently touched her forehead and said, ‘Sorry.’ That’s the thing about being born a Catholic: you always feel guilty even if it isn’t your fault. You can stop believing – it’s all infantile nonsense after all – but you can’t stop the guilt.

The Englishman came over to the coffin and stood beside Kit. ‘She’s in much better shape than my lot. The gendarme says she was seated in the back of the plane – and got less impact. You ought to see the pilots.’

‘They were both ex-RAF. They must have known they were going to die, but still remembered to stuff handkerchiefs in their mouths.’

‘Stops you from biting your tongue off when you crash.’

On the other side of the room, the gendarmes had set up four trestle tables. Each table was laden with the belongings of one of the deceased. The pilots’ tables were nearly empty. Fitzwilliam’s contained only a small suitcase and its contents – but Kathleen’s table was heavily burdened and overflowing.

Liverpool Angels by Lyn Andrews
Sweet Seduction by M Andrews
Libbie: Bride of Arizona (American Mail-Order Bride 48) by Linda Carroll-Bradd
Hot as Hell (The Deep Six) by Julie Ann Walker
Assata: An Autobiography by Assata Shakur
The Secret Life of the American Musical: How Broadway Shows Are Built by Jack Viertel
Out of Bounds by Carolyn Keene
Uncommon Enemy by Alan Judd
The Very Best of Kate Elliott by Kate Elliott
Children of Hope by David Feintuch