Read The Finder: A Novel Online

The Finder: A Novel 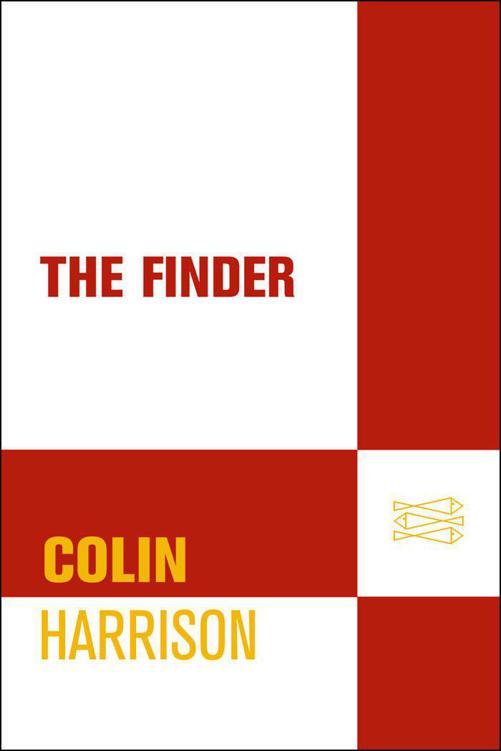 This is a work of fiction. Any resemblance to actual persons,
living or dead, is entirely coincidental.

For my mother
&
In memory of my father

Three girls in a car
at night, on their way to the beach in Brooklyn. Two are Mexican, about nineteen or twenty, young and pretty—like a lot of Mexican girls you see in New York City. Straight black hair, soft faces, a sweet-eyed optimism not yet destroyed by labor. Dressed in identical blue service uniforms with
CORPSERVE
patches on the breast, they are nestled in a Toyota two-door subcompact as it flies along the Belt Parkway. The rattling, uninsured car is fifteen years old, carries expired Georgia plates, and has a market value of $125. In New York City you can always buy a car like this and you can always sell one. Who cares about the paperwork? That's for people who have big money to lose. These Mexican girls have no money. They work cleaning offices in Manhattan. Their day begins at seven p.m., so the hour now might be five in the morning, just before dawn. They go out afterward almost every night, a way of saying this work is not yet destroying us. A few minutes sitting in the car at the beach, then they'll swing back to the house on Avenue U, where they live with nine other people. Why drive?
The subway, it don't go where we live.
And the bus, it takes
like forever.
So the girls drive. Often they will smoke a little pot some boys gave them and giggle. Open the car's cracked sunroof, let the smoke drift upward. They are enjoying their freedom, their few hard-won dollars, their provisional American identities. They smoke, maybe drink some too, listen to the radio. Giggling and sweet, but tough—tougher than American girls. In the country illegally. Each carrying some kind of
fake green card that she bought for $150. They've made the journey and are not yet beaten down, not yet burdened with children and husbands. They have cookouts and volleyball in one of the Mexican sections of Marine Park. And they have guys, when they feel like it, know what to do to make their men feel
bien
. Sex yet another kind of labor. Their mothers back home don't know—don't know a lot.
Be careful!
they beg,
Nueva York is dangerous for girls like you
. But that's wrong. Mexico is where girls get found in the desert, legs wide open, hair dragged with dirt, dead eyes already eaten out by bugs. New York City is big and safe and filled with rich, fat
norteamericanos
. Maybe the girls won't even marry Mexican men. Why should they? They talk about the office guys. The tall ones who look so good in a suit. You want to do him, girl, I know you do.
No, no, es muy gordo,
too fat. They laugh. They see a lot of powerful people leaving their offices at the end of the day. Men and women in business clothes. Nice haircuts, good watches.
White ladies who think they's better than us.
A corporate world so close they could reach out and touch it with their cherry-colored fingernails. Yet given the stratifications of American society, it is a world they are unlikely ever to know from within. They are like Nigerians in London, Turks in Paris, Koreans in Tokyo, Filipinos in Riyadh—outsiders in their new homelands. Their only advantages are their youth and willingness to suffer, but they will lose these advantages, as eventually they will lose everything, including their lives. Come to think of it, they will lose everything a lot sooner rather than later.

Tonight, in fact. Before the sun is up. Minutes from now.

The third girl in the car, sitting in the back, is older, and not really a girl anymore. She's cute, slim, and Chinese. Yet fluent in English. She's learned to speak a little Spanish, with a Mexican accent. She is the Mexican girls' boss. They were afraid of her at first but now they like her, although they can barely speak English to one another, because of the accents. You speak Chenglish to us, they laugh. Her name is Jin Li, and they call her Miss Jin, which comes out
MeezaJin
. She's very pretty, in that Chinese way. Slender, with a beautiful face. But so
nerviosa
! Always checking on everything. Telling people where to put the full trash
bags for the service elevators. What's she so worried about? They work hard, they do a good job. You need to relax, they finally told her. You ever go out? She shook her head and they could see she wanted to. So now, every week or so, she'll go out with them. Keeps things friendly. MeezaJin is studying them, they know. She's quiet, she watches everybody. They are outsiders in America but more at home than MeezaJin is, though she makes a lot of money and reads English. She even has a white boyfriend—or used to, they are not sure. MeezaJin doesn't say much about herself—like she might be hiding something, like she might be some kind of
criminal,
girl, you know what I'm saying?

The work shift has come and gone, as it does each night. The offices need tidying and vacuuming. The trash cans need emptying. There's precious little conversation between the girls and the office people—a few patronizing
thank-yous,
sometimes a perfunctory nodding of the head on the way out. Nobody pays much attention to the cleaning people in a corporation. Why should they? They're
cleaning people.
Occasionally the girls encounter office workers eating pizza and pulling all-nighters. But for the most part all they see is just big-time corporate calm, the hushed rush of money moving through the wires and across the screens. And there is plenty of money, millions and billions, by the look of it. The marble lobby floor gets buffed at night. The elevators get wiped clean, even the steel-walled service elevators that the girls are required to use. The carpeting is washed. The vending company guy refills the free coffee machine with twenty-four kinds of coffee and tea. The Indian computer guys go through like mice, fixing firewalls, loading spam blockers, cleaning out viruses. Every activity is about money. A way to make more money. The windows are washed, the computers are new.
Money.
Being made in every office. You can almost smell it. The girls like being near the money. Doesn't everyone?

To what degree do they realize that the trash they empty out of the offices each day is in fact the paper trail of deals, trends, ideas, conflicts, sensitive issues, and legal wars—some of which, set before other eyes, may have enormous value? The answer is that they have no actual awareness of this. They are only barely literate in Spanish and more or
less illiterate in English. This is expectable. Indeed, it has been purposefully expected: they have been hired by MeezaJin for their distinct inability to read English, their unknowingness about the ornate structures of capital and power through which they lightly pass each night. Industrious as they are, their naïveté also has value. Much of New York City depends upon such people. The ones who know nothing. The city needs their labor, compliance, and fear. You could question these girls in a court of law.
Exactly which proprietary documents were you removing, Miss Chavez?
They could never answer.

Jin Li likes these Mexican girls, though. They work hard, they do not complain. She knows that they do not suspect her of anything other than an eagerness to exploit their labor. She knows too that the building services managers who contract with CorpServe, tough guys with keys and beepers and walkie-talkies, see in her a pretty Chinese girl whose English is not so good—she purposefully makes it worse when she speaks to them—and they think she will be a little cheaper. They are right, too. The Chinese are always a little cheaper, when they want to be. They figure out how to do it, how to undercut everyone else, and then they become indispensable. Jin Li's customers are eager to exploit her eagerness to exploit others. People expect the Chinese to be brutal to their workers when they need to be, even in America, and most of the time they are not disappointed.

Tonight the two Mexican girls have worked hard stuffing blue plastic bags into the service elevator of a building near Fifty-first Street and Broadway, with Jin Li supervising. CorpServe is contracted for nine floors of the building: the sixteenth through nineteenth floors, commercial loan processing offices for a bank, and the twentieth through twenty-fourth floors, the national management offices of a small pharmaceutical company. Jin Li runs eight crews at different midtown Manhattan locations each night and floats among them. The office layouts are all roughly similar, with a service elevator that drops into a street-level truck bay where CorpServe's immense mobile shredding vehicle is parked. There an older man in a blue uniform matching theirs tosses the bags into a sucking orifice that shreds them into confetti. This man is Chinese, like Jin Li, and at times she comes down to
the truck bay with certain piles of bags, issues specific instructions to him, then watches to see that he complies. The roar of the shredders drowns out their speech. They both know that they are always being watched by ceiling-mounted security cameras, some of them remote-swiveling, and they also both know how easy it is to work around them. You just have to know the angles. The cameras can see the CorpServe truck but not into the truck. You can set aside a few bags marked by hand with a special inch-high Chinese character and the camera doesn't know.

But that was hours past and now the night's work is done and the girls laugh and listen to the Latino radio station and feel the salty mist off the water. The beach parking lot is usually empty at this hour. Nobody bothers the girls, but if someone does—some cracked-out motherfucker, some drunk-ass wannabe punk—they have pepper spray in their purses. Tonight they drink a little cheap jug wine in plastic cups, dance in their seats to the radio. The Mexican girls ask MeezaJin about her white boyfriend. I liked him! So macho for a white guy! What happened? one of the girls asks, wriggling in a seat patched with duct tape. Oh, you know . . . Jin Li laughs but is quick to look toward the water. It wasn't going to work out. But she doesn't elaborate, barely admits the real reason to herself. She was forced to end it. Listened to his phone messages asking her to call. Hated herself for not calling him back. What he did to her in bed—thinking about not getting
that
will just upset her. She's had relationships with
gweilos
before—British, German, Italian. She likes them, much better than Chinese men, and this one was best of all. And maybe that's why she's here tonight, just to forget him.