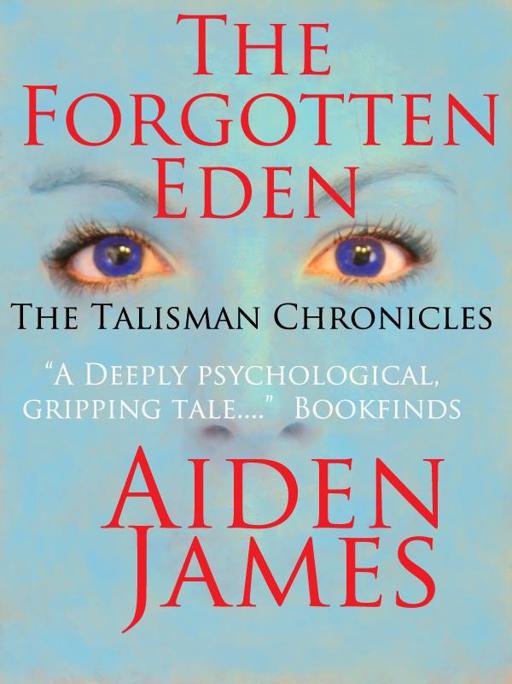 “
Aiden James has written a deeply psychological, gripping tale that keeps the readers hooked from page one.”

—
Bookfinds
review for THE FORGOTTEN EDEN

“
Not only is Aiden James a storyteller par excellence, but his material for his story is riveting.”

“
The hook to this excellent suspense thriller is the twists that will keep readers wondering what is going on as nothing is quite what it seems. Adding to the excitement is that the audience will wonder whether the terror is an evil supernatural creature or an amoral human…Aiden James provides a dark thriller that grips fans from the opening.”

—
Harriet Klausner
, for THE FORGOTTEN EDEN

“
Aiden James writing style flows very easily and I found that CADES COVE snowballed into a very gripping tale. Clearly the strengths in the piece were as the spirit's interaction became prevalent with the family… The Indian lore and ceremonies and the flashbacks to Allie Mae's (earthly) demise were very powerful. I think those aspects separated the work from what we've seen before in horror and ghost tales.”

—
Evelyn Klebert
, author of A GHOST OF A CHANCE and DRAGONFLIES

—
J.R. Rain
, author of MOON DANCE and THE BODY DEPARTED

THE DYING OF THE DARK SERIES

Blood Princesses of the Vampires

The Forgotten Eden by Aiden James

Published by Aiden James at Amazon.com

This ebook is licensed for your personal enjoyment only. This ebook may not be re-sold or given away to other people. If you would like to share this book with another person, please purchase an additional copy for each person you share it with. If you’re reading this book and did not purchase it, or it was not purchased for your use only, then you should return to Amazon.com and purchase your own copy. Thank you for respecting the hard work of this author.

The Murder of Dr. Mensch

The agent poured himself another round of coffee, carefully stirring in a measure of cream as if this simple act required complete concentration. Jack Kenney studied him from where he sat, absently drumming his fingers on top of a steel table in the middle of the interrogation room. Well-defined muscles tensed beneath the tight confines of his faded black T-shirt, he seemed poised and ready to launch himself out of his chair like a hungry lion. Even his strong brow and chiseled facial features made him look predatory, with hazel eyes aglow from acute agitation.

Yet, the exhaustion and weariness brought on by the endless stream of questions that began last night made him yearn painfully for sweet silence and the unlikely chance he might recoup some of the sleep he’d lost since his abduction from Tuscaloosa, Alabama.

“
Like I’ve been telling ya’ll,” said Jack, tersely. “There’s nothing more to add to my statement.”

Agent Frank Reynolds grimaced in irritation. Jack figured the man didn’t take kindly to a smart mouth, definitely not one belonging to a twenty-year old college kid. The agent’s earlier speech about being in this line of work for nearly thirty years repeated tiredly in Jack’s head, along with the threat of what would become of him if he didn’t start cooperating soon. He could also tell the man’s patience and self-described ‘even-tempered nature’ had worn dangerously thin.

“
I guess we’re all just supposed to believe that Dr. Mensch’s beating and subsequent death in the hospital were mere coincidences which, unfortunately, you’ve been linked to,” said Reynolds. “Is that what you expect us to believe, Mr. Kenney?”

He moved deliberately toward Jack, the cup of coffee in one hand while he motioned to his two companions, Agents Ben Casey and Steve Iverson with the other.

“
You must think the three of us have shit for brains, son, and your arrogant attitude is really starting to piss me off!”

He stepped up to the table and leaned down into Jack’s face, who remained unfazed by the advancing giant of a man glaring at him. Instead, amused and fascinated by the elder agent’s behavior, Reynolds’ thick southern accent intrigued him, degenerating now into a slur. Even more, his flushed face burned with anger, in such contrast to his pale gray eyes and wavy white hair.
Like a clean-cut Santa hittin’ the sauce.
The man’s large stature of nearly six and a half feet would’ve intimidated most anyone. But Jack remained unaffected by the man’s invasion into his personal space.

He grinned wryly, studying the agent’s face to determine the true depth of malice. He then let his eyes wander to the I.D. badge dangling from the right lapel of his dark blue suit coat. A stoic picture from a few years earlier, the identifier ‘AS419’ etched in gold glistened brightly under the glare from the long fluorescent light above the table.

“
What the hell do you find so amusing?” Reynolds hissed.

“
Forgive me…
sir,”
Jack replied, unapologetic. “I’m just tired...tired enough to find everything a little amusing at this point.”

“
Maybe I can convince you to take Frank’s words a bit more serious.”

Steve Iverson spoke. Svelte in build, and not near as tall as Reynolds, he grasped Jack’s shoulder and squeezed the tender area just below the collarbone, steadily increasing the pressure until the bone throbbed.

Jack’s reflexes forced him to look down onto the steel table, where the distorted reflection of his painful grimace greeted him. The tangled mess of his thick auburn hair further obscured his rugged handsomeness, except for his hazel eyes. Narrow slits of anger growing brighter by the second.

Iverson increased the pressure on Jack’s collarbone, forcing him to clinch his teeth to keep from screaming. The torture continued until Jack fell out of his chair. It landed loudly on its side, and he squirmed on the cement floor with Iverson’s hand still attached to his shoulder’s sensitive pressure point.

The agent brought his face down low enough to peer into his victim’s eyes, snickering in contempt. A nervous tic quivered excitedly along his lower lip, and he seemed to draw immense pleasure from Jack’s expression, whose immediate fantasy was to turn over and shove his knee hard into Iverson’s groin. But he couldn’t free himself.

“
You know, right now may be as good a time as any to rearrange this pretty boy’s face. How about it, Frank?”

The agent suddenly jerked Jack’s head back by the hair. Peering into his face, Iverson’s smirk remained, though slightly broadened by his apparent amusement. But the coldness of his steel-blue eyes glowed even more malleable, revealing the cold-hearted killer within. Jack could tell the man might ‘eliminate’ someone with no more remorse than he’d have for smashing a stink beetle.

In a way, he reminded Jack of a ‘down home’ country singer his grandfather, Marshall Edwards, liked to listen to. His sandy brown hair brushed back to where he resembled Merle Haggard, for a moment Jack pictured the tune “I’m Just An Old Jukebox Junkie” coming out of Iverson’s mouth. The image struck him as particularly funny and almost made him laugh. A slight snicker escaped from his mouth anyway. It took just an instant for the agent to react.

“
You think this is funny, you sorry sack of shit??
”
he screamed into Jack’s ear as he yanked him to his feet by the hair.
“
Suppose I show you something real funny
—
like your dick sticking out of your ass, you stupid fuck!!
”

Jack winced in pain, and started to take a swing at him. Before he could deliver even a slight blow, Iverson pushed him into the waiting arms of Ben Casey, who shoved his arms high behind his back. The ligaments in his joints stretched to the point of tearing.

“
I’m all for giving this punk a workout.”

Short and somewhat portly, but the most menacing of the trio, Casey’s husky voice reverberated deep from behind Jack.

Held fast, Jack warily watched the other two men step up to him.

A nauseating blend of tobacco, sweat, and a mixture of colognes filled his nostrils—one cheap, and the other a strong musk scent. He swallowed hard, for he knew if he vomited on any of these guys, they might not let him live long enough to apologize.

The door to the room suddenly swung open, the hinges whining loudly from the door’s steel-insulated weight. Another agent stepped into the room carrying a long, black attaché case in one hand, and a small blue duffel bag in the other. Reynolds and Iverson backed away from Jack, while Casey released his arms.

He moved over to him and extended his hand in welcome. The man set the attaché case and duffel bag down on the floor.

“
It’s good to see you, Frank,” he said, responding with a hearty handshake. “‘Sorry I’m late. Traffic was worse than usual tonight. Am I interrupting anything?”

“
No...not really,” he said, shooting a mean glance toward Jack that clearly implied ‘you’ll keep your damn mouth shut if you know what’s good for you’. “He’s all yours, now.”

“
I don’t believe we’ve met,” he said, extending his hand for Iverson to shake.

“
Pete, this is Steve Iverson, and Ben Casey from the New York office,” said Reynolds.

“
Peter McNamee...I’m pleased to meet you both.” He shook hands with Casey.

“
Pete’s dad and I go way back,” said Reynolds, glancing coolly toward Jack once more. “We used to work together for the bureau down in New Orleans.”

“
Dad still speaks fondly of those times …. We’ll need to catch up some when our work here is through.” Peter McNamee shifted his gaze back to the haggard young man standing nearby. Again, Jack met his gaze head on. An awkward moment, and then Peter resumed his conversation with Reynolds. “I’m sure he’ll be interested to know what you’ve been up to.”

“
Well, I guess I’ll get started.” Agent McNamee picked up his attaché case and duffel bag from the floor. He moved over to the table and sat both items on top of it.