Read The Golden One Online 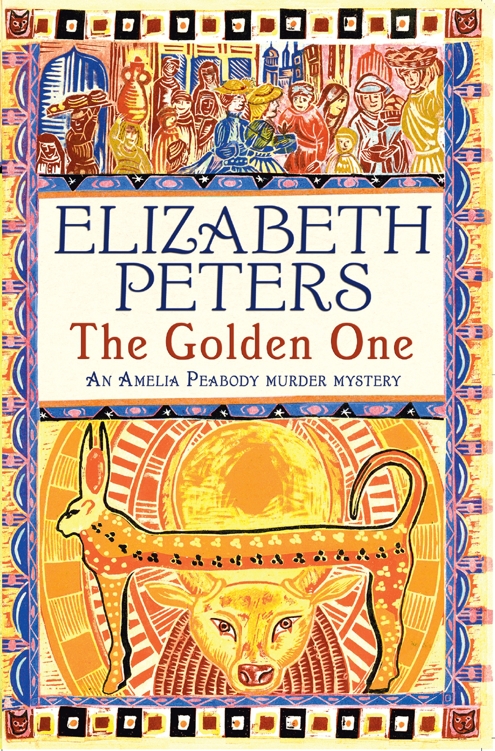 E
LIZABETH
P
ETERS
was born and brought up in Illinois and earned her PhD in Egyptology from the
University of Chicago’s famed Oriental Institute. Peters was named Grandmaster at the inaugural Anthony Awards in 1986 and Grandmaster by the Mystery Writers of America at the Edgar Awards in
1998. She lives in a historic farmhouse in Frederick, Maryland, with six cats and two dogs.

‘Dastardly deeds, whirlwind romances, curious mummies and all the fun and intrigue of Egyptian excavations, with a heroine who wields a sturdy parasol rather than a
magnum. Accomplished entertainment.’

‘Between Amelia Peabody and Indiana Jones, it’s Amelia – in wit and daring – by a landslide.’

‘The doughtiest, smartest, most appealing female protagonist in mystery fiction.’

‘If Indiana Jones were female, a wife and a mother who lived in Victorian times, he would be Amelia Peabody Emerson.’

‘A writer so popular that the public library has to keep her books under lock and key.’

‘Amelia Peabody Emerson, archaeologist extraordinaire, and arguably the most potent female force to hit Egypt since Cleopatra, is digging in again!’

Titles in this series
currently available from Robinson

Crocodile on the Sandbank

The Curse of the Pharaohs

Lion in the Valley

The Deeds of the Disturber

The Last Camel Died at Noon

The Snake, the Crocodile and the Dog

The Falcon at the Portal

Thunder in the Sky

Lord of the Silent

First published in the USA by William Morrow,
An imprint of Harper Collins Publishers, 2002

This paperback edition published by Robinson,
an imprint of Constable & Robinson Ltd, 2003

All rights reserved. This book is sold subject to the condition that it shall not, by way of trade or otherwise, be lent, re-sold, hired out or otherwise circulated in any
form of binding or cover other than that in which it is published and without a similar condition including this condition being imposed on the subsequent purchaser.

We praise the Golden One,
the Lady of Heaven, Lady of Fragrance,
Eye of the Sun, the Great Goddess,
Mistress of All the Gods,

Lady of Turquoise, Mistress of Joy, Mistress of Music . . .
that she may give us fine children,
happiness, and a good husband.

To err is human, and I am and I do, despite the fact that I go to considerable effort to get even small details right. I do not scruple to make use of my friends in this
endeavour; several of them have read all or part of the manuscript and made suggestions. I am particularly indebted to Tim Hardman and Ann Crispin, for setting me straight on the (to me) esoteric
subject of horses and cavalry. Catharine Roehrig, one of the few Egyptologists who have visited the area of the southwest wadis, was good enough to tell me where I went wrong in my initial
description. Donald Ryan, one of the few others, also corrected mistakes in his usual tactful manner. Dennis Forbes, George Johnson, and Kristen Whitbread read the entire bulky manuscript and
offered advice. If errors remain, they are mine, and not those of my advisers.

The Editor is pleased to present another of the journals of Mrs Amelia Peabody Emerson, Egyptologist, adventurer, wife, and mother. (She would, the Editor believes, approve that
order.) Editing her prose is no easy task, for the original text contains some misinformation, a great deal of repetition, and certain omissions. In order to repair the latter fault, the Editor
has, as before, inserted sections from Manuscript H, begun by Ramses Emerson at approximately the age of sixteen, and continued by him and his wife after their marriage. This manuscript describes
events at which Mrs Emerson was not present, and gives a viewpoint differing in significant ways from hers. She was an extremely opinionated lady.

The rest of the Emerson papers are still being studied, collated, and edited. Material from these sources has appeared in earlier volumes (and may appear in the future), but
none of it adds anything relevant to the present volume.

The Cemetery of the Monkeys

When I am in one of my philosophical moods, I am inclined to wonder whether all families are as difficult as mine.

I was in such a mood as I dressed for dinner on the penultimate evening of our voyage. We would dock at Alexandria in two days, unless, of course, the ship was sunk by a German torpedo. A winter
voyage from England to Egypt is never comfortable; but in that fateful December of 1916, after more than two years of war, the possibility of submarine attack had been added to the perils of rough
seas and stormy weather.

I was not thinking of that danger – for I make it a habit never to worry about matters that are beyond my control – nor of the difficulty of trying to keep my footing while the floor
of the cabin rose and fell and the oil lamps swung wildly on their brackets – for mine is the sort of mind that rises above such things – but perhaps these considerations did affect me
more than I realized, giving a pessimistic cast to my normally cheerful reflections.

Mind you, I had no legitimate grounds for complaint about my immediate family. My husband, Radcliffe Emerson, is the most distinguished Egyptologist of this or any other era. His sapphirine-blue
eyes, the cleft, or dimple, in his strong chin, his thick sable hair, and muscular but symmetrical frame are additional attractions to me and, I regret to say, to innumerable other females.

He has a few minor eccentricities: his command of invective, which has earned him the Egyptian sobriquet of Father of Curses, his explosive temper, his autocratic, arbitrary method of dealing
with the authorities of the Service des Antiquités, which had led in the past to our being barred from most of the interesting sites in Egypt . . .