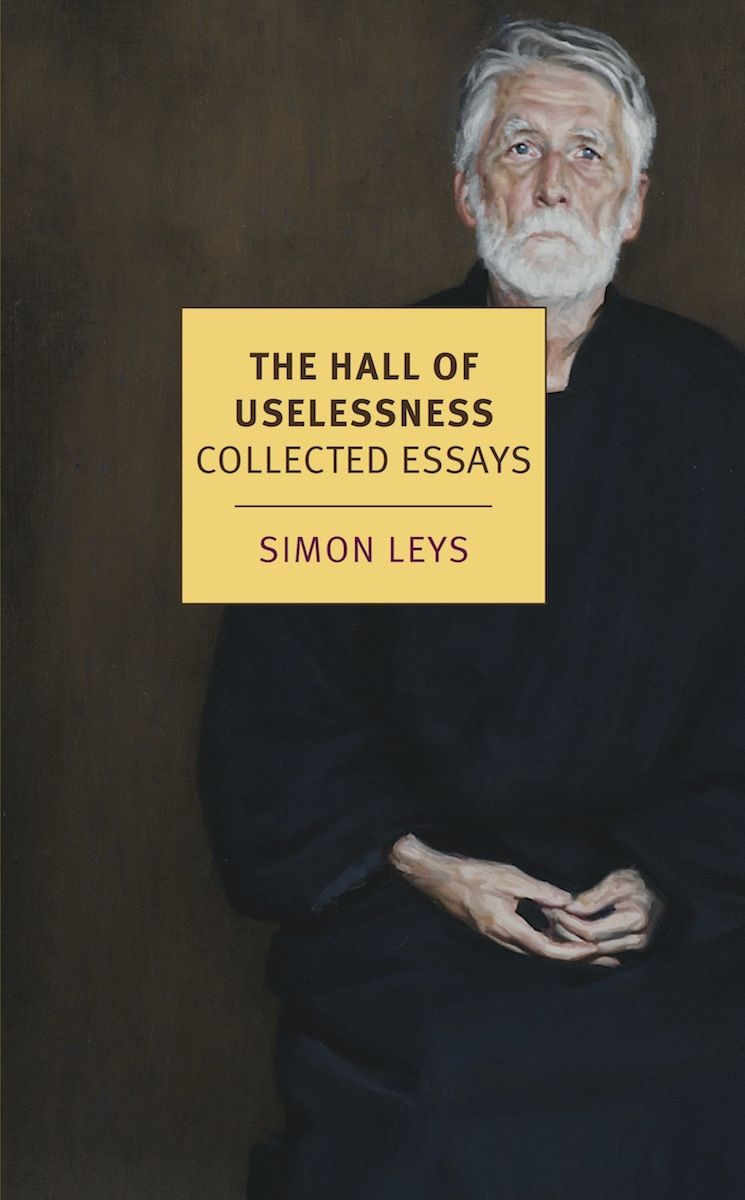 SIMON LEYS
is the pen name of Pierre Ryckmans, who was born in Belgium and settled in Australia in 1970. He taught Chinese literature at the Australian National University and was Professor of Chinese Studies at the University of Sydney from 1987 to 1993. Leys’s writing has appeared in
The New York Review of Books, Le Monde, Le Figaro Littéraire
, and other periodicals. Among his books are
Chinese Shadows, The Death of Napoleon
(forthcoming from NYRB Classics),
Other People’s Thoughts
, and
The Wreck of the Batavia & Prosper
. In 1996 he delivered the Australian Broadcasting Corporation’s Boyer Lectures. His many awards include the Prix Renaudot, the Prix Femina, the Prix Guizot, and the Christina Stead Prize for Fiction.

THE HALL OF USELESSNESS

THIS IS A NEW YORK REVIEW BOOK

PUBLISHED BY THE NEW YORK REVIEW OF BOOKS

Translations of “The Prince de Ligne, or the Eighteenth Century Incarnate,” “Victor Segalen Revisited Through His Complete Correspondence,” “The Belgianness of Henri Michaux,” and “Roland Barthes in China” © 2013 by Donald Nicholson-Smith

The Library of Congress has cataloged the earlier printing as follows:

The hall of uselessness : collected essays / by Simon Leys.

The Hall of Uselessness (By Way of a Foreword)

The Imitation of Our Lord Don Quixote

An Empire of Ugliness

Lies That Tell the Truth

The Prince de Ligne, or the Eighteenth Century Incarnate

Chesterton: The Poet Who Dances with a Hundred Legs

Portrait of Proteus: A Little ABC of André Gide

The Truth of Simenon

The Belgianness of Henri Michaux

The Sins of the Son: The Posthumous Publication of Nabokov’s Unfinished Novel

The Experience of Literary Translation

On Readers’ Rewards and Writers’ Awards

The Chinese Attitude Towards the Past

An Introduction to Confucius

Ethics and Aesthetics: The Chinese Lesson

The Wake of an Empty Boat: Zhou Enlai

Anatomy of a “Post-Totalitarian” Dictatorship: The Essays of Liu Xiaobo on China Today

Foreword to
The Sea in French Literature

In the Wake of Magellan

Richard Henry Dana and His
Two Years Before the Mast

The Idea of the University

A Fable from Academe

A Way of Living

Tell Them I Said Something

THE HALL OF USELESSNESS

(By Way of a Foreword)

T
RADITIONALLY
, Chinese scholars, men of letters, artists would give an inspiring name to their residences, hermitages, libraries and studios. Sometimes they did not actually possess residences, hermitages, libraries or studios—not even a roof over their heads—but the existence or non-existence of a material support for a Name never appeared to them a very relevant issue. And I wonder if one of the deepest seductions of Chinese culture is not related to this conjuring power with which it vests the Written Word. I am not dealing here with esoteric abstractions, but with a living reality. Let me give you just one modest example, which hit me long ago, when I was an ignorant young student.

In Singapore, I often patronised a small movie theatre which showed old films of Peking operas. The theatre itself was a flimsy open-air structure planted in a paddock by the side of the road (at that time, Singapore still had a countryside): a wooden fence enclosed two dozen rows of seats—long planks resting on trestles. In the rainy season, towards the end of the afternoon, there was always a short heavy downpour, and when the show started, just after dark, the planks often had not yet had time to dry; thus, at the box-office, with your ticket, you received a thick old newspaper to cushion your posterior against the humidity. Everything in the theatre was shoddy and ramshackle—everything except the signpost with the theatre’s name hanging above the entrance: two characters written in a huge and
generous calligraphy,
Wen Guang
—which could be translated as “Light of Civilisation” or “Light of the Written-Word” (it is the same thing). However, later on in the show, sitting under the starry sky and watching on screen Ma Lianliang give his sublime interpretation of the part of the wisest minister of the Three Kingdoms (third century AD), you realised that—after all—this “Light of Civilisation” was no hollow boast.

Now, back to The Hall of Uselessness. It was a hut located in the heart of a refugee shantytown of Hong Kong (Kowloon side). To reach it at night, one needed an electric torch, for there were no lights and no roads—only a dark maze of meandering paths across a chaos of tin and plywood shacks; there were open drains by the side of the paths, and fat rats ran under the feet of passers-by. For two years I enjoyed there the fraternal hospitality of a former schoolmate, whom I knew from Taiwan—he was an artist (calligrapher and seal-carver) sharing a place with two postgraduate students, a philologist and a historian. We slept on bunks in a single common room. This room was naturally a complete mess—anywhere else it would have resembled a dismal slum, but here all was redeemed by the work of my friend: one superb calligraphy (in seal-script style) hanging on the wall—
Wu Yong Tang
, “The Hall of Uselessness.” If taken at face value, it had a touch of tongue-in-cheek self-deprecation; in fact, it contained a very cheeky double-meaning. The words (chosen by our philologist companion, who was a fine scholar) alluded to a passage from
The Book of Changes
, the most ancient, most holy (and most obscure) of all the Chinese classics, which said that “in springtime the dragon is useless.” This, in turn, according to commentaries, meant that in their youth the talents of superior men (promised to a great future) must remain hidden.

I spent two years in The Hall of Uselessness; these were intense and joyful years—when learning and living were one and the same thing. The best description of this sort of experience was given by John Henry Newman. In his classic
The Idea of a University
, he made an amazingly bold statement: he said that if he had to choose between two types of universities, one in which eminent professors teach students who come to the university only to attend lectures and sit for
examinations, and the other where there are no professors, no lectures, no examinations and no degrees, but where the students live together for two or three years, he would choose the second type. He concluded, “How is this to be explained? When a multitude of young men, keen, open-hearted, sympathetic and observant as young men are, come together and freely mix with each other, they are sure to learn from one another, even if there be no one to teach them; the conversation of all is a series of lectures to each, and they gain for themselves new ideas and views, fresh matter of thought and distinct principles for judging and acting day by day.”

I hope I have remained faithful to the memory of The Hall of Uselessness—not in the meaning intended by my friends (for I am afraid I am not exactly of the dragon breed!), but at least in the more obvious meaning of Zhuang Zi, quoted above. Yet is this second aspiration more humble, or more ambitious? After all, this sort of “uselessness” is the very ground on which rest all the essential values of our common humanity.

Part I
QUIXOTISM
THE IMITATION OF OUR LORD DON QUIXOTE

I
N DEBATES,
the word “quixotic” is nearly always meant as an insult—which puzzles me, since I can hardly think of a greater compliment. The way most people refer to Don Quixote makes you wonder if they have actually read the book. In fact, it would be interesting to find out whether
Don Quixote
is still as widely read as the universal popularity of the character would normally suggest. But it could be awkward to conduct such an enquiry—especially among educated people, one often encounters a strange misconception that there are a certain number of books one
should
have read, and it would be shameful to acknowledge that one has failed in this sort of cultural obligation. Personally, I disagree with such an attitude; I confess I read only for pleasure.

Of course, I am talking here about creative literature (fiction and poetry), not about the theoretical literature (information, documents) which scholars and professional people must master in order to perform competently within their respective disciplines. For instance, you would naturally expect that—let us say—a medical practitioner should have read some treatises of anatomy and pathology; but you cannot demand that he also be thoroughly conversant with all the short stories of Chekhov. (Though, as a wise doctor once remarked, between two doctors whose medical qualifications are otherwise equal, we should trust the one who reads Chekhov.)

Literary critics do fulfil a very important role (as I shall try to show in a moment), but there seems to be a problem with much contemporary criticism, and especially with a certain type of academic literary criticism. One has the feeling that these critics do not really like literature—they do not enjoy reading. Worse even, if they were actually
to enjoy a book, they would suspect it to be frivolous. In their eyes, something that is amusing cannot be important or serious.

This attitude is unconsciously pervading our general view of literature. As a result, we tend to forget that until recently most literary masterpieces were designed as popular entertainment. From Rabelais, Shakespeare and Molière in the classical age, down to the literary giants of the nineteenth century—Balzac, Dumas, Hugo, Dickens, Thackeray—the main concern of the great literary creators was not so much to win the approval of the sophisticated connoisseurs (which, after all, is still a relatively easy trick) as to touch the man in the street, to make him laugh, to make him cry, which is a much more difficult task.

Relentless Liberation by L.J. Fine
Thankful for You by Cindy Spencer Pape
Dangerous by Jacquelyn Frank
We Are the Ants by Shaun David Hutchinson
After the Wreck, I Picked Myself Up, Spread My Wings, and Flew Away by Joyce Carol Oates
The British Billionaire's Baby by Cristina Grenier
Because You Love Me (Falling for You, Book Three) by Ava Claire
Ten Trees and a Truffle Dog by Jamie Ivey
The Quest of the Warrior Sheep by Christopher Russell
Crossing to Safety by Wallace Stegner