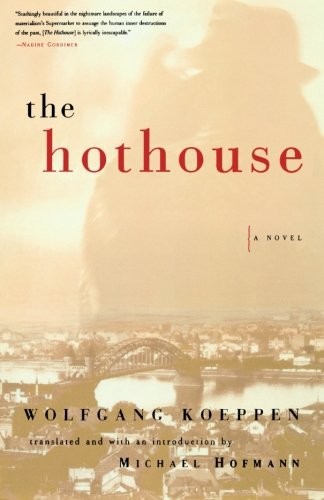 The novel
The Hothouse
draws on current events, in particular recent political events, but only as a catalyst for the imagination of the author. Personalities, places, and events that occur in the story are nowhere identical with their equivalents in reality. References to living persons are neither made nor intended in what is a purely fictional narrative. The scope of the book lies beyond any connections with individuals, organizations, and events of the present time; which is to say, the novel has its own poetic truthfulness.

God knows politics is a complicated business
,
and the hearts and minds of men often flutter helplessly around in it, like birds in a net. But if we are unable to feel indignant at a great injustice
,
we will never be able to act righteously.

The process of history is combustion.

W
OLFGANG
K
OEPPEN
(1906-1996)
HAD
A
VERY
long life and a very strange career. Following an obscure, provincial, peripatetic youth on the Baltic coast of Germany—nothing to record, no apprenticeships, no achievements, no landmarks, the only thing that characterized him a besetting love of books (asked what the crucial event in his life was, he replied: learning to read; asked another time how he would like to die, he said: in bed, with a book)—he had, by the late 1920s, made his way to Berlin (all roads then led, as they do again, to Berlin). There, Koeppen had his only period of regular employment, when he worked on the cultural pages of the
Berliner
Börsen-Courier
for a couple of years, leaving in 1933, much as Keetenheuve does in
The Hothouse
, from dislike and apprehension of the Nazis. He left Germany, not for Canada and England, like Keetenheuve, but for Holland. He had, by this time, published a novel,
Eine unglückliche Liebe
(An Unhappy Love Affair,
1934) with the publisher Cassirer.

It was well reviewed, sold little, and the following year, there was another,
Die
Mauer schwankt (
The Tottering Wall),
again with Cassirer. Soon thereafter, the newspaper closed down: Cassirer, a Jew, fled, and Koeppen, in Holland with Jewish friends, who were themselves debating where to go and what to do with themselves, decided to return, in late 1938, to Germany, rather than wait to be apprehended. Koeppen lacked the fame, the contacts, on a banal level, the aptitude for languages, and perhaps ultimately, the brute necessity required to make a go of things in exile.

In 1939, extraordinarily, he was on a plane to Berlin. He said: "It is perhaps my only boast not to have served in Hitler's armies for a single hour." What Koeppen did was—Penelope like—to work on unrealized film projects in the Berlin film industry. In 1944, fearing exposure from Nazi colleagues, he made use of the circumstance that his apartment building was destroyed in an Allied air raid, to go underground. He made his way to Munich, where he stuck for fifty years. Munich was the subject and the setting for the first of his second clutch of novels, the so-called "Trilogy" or "Postwar Trilogy"
Pigeons on the Grass
—which I describe elsewhere as "set in Munich in a single day, a modernist jigsaw in 110 pieces and showing 30 figures"—was published in 1951, closely followed by
The Hothouse
(1953) and
Death in Rome
(1954). Then and later (and, for that matter, earlier: Hermann Hesse had praised his second book for a Swedish newspaper), Koeppen was not short of influential supporters among fellow writers, critics, and publishers. Günter Grass referred to him in his Nobel Prize acceptance speech; Max Frisch and Hans Magnus Enzensberger have praised him in superlatives; Germany's most powerful literary critic, Marcel Reich-Ranicki, has filled a short book with his encomia on Koeppen; Siegfried Unseld, the head of Suhrkamp, first acquired, then promoted and kept faith with and bankrolled his author for over thirty years. And yet, in spite of that, both within Germany and internationally, Koeppen has remained a marginal figure, one for the few, a writers' writer. Why is this?

In the first place, the idea of a literary career assumes a more or less even and continuous output, under more or less stable external conditions. And Koeppen's novels—he wrote no others in his remaining forty years, but more of that later— were written and published quickly, spasmodically, over very few years, but in two widely spaced periods. What good to him were his early books, published by a Jewish publisher in the Third Reich—both things that (it was part of his point) the good folks of the fifties were at pains to forget? Karl Korn, the outstanding critic who reviewed both
Pigeons on the Grass
and
The Hothouse
in the
Frankfurter
Allgemeine Zeitung,
began by remarking unhappily that Koeppen's name was unknown to all but a couple of dozen people. Looked at in one way, he was a debutant; and in another, he was an experienced writer in mid-career, albeit ending a sixteen-year silence! No wonder people didn't know what to make of him!

And then there was the nature of the books themselves. Reich-Ranicki dubbed
The Hothouse
"a provocative elegy" and
Death in Rome
"an alarming provocation"—but that was years later. At the time, critics and readers merely felt themselves goaded beyond endurance. The reaction to Koeppen's poetically charged, scathing, rhythmic prose on the part of the morbidly sensitive, anxious, and protective media of the new Federal Republic can only be compared to that of some Soviet bloc country to certain works of samizdat literature— with the difference that the work of the censors blue pencil and the secret police was carried out by scribblers in the newspapers and an indifferent public. One review, in a leading German Sunday paper, was headed: "Not to be touched with a barge-pole," another ended: "The public will say 'Crucify him!' He won't care." Another, more "thinky" piece in a monthly magazine was actually followed, many years later, by a "recantation"—and how often does that happen in the literary world!? A bookshop in Bonn scheduled a reading from
The Hothouse
followed by a public discussion with politicians; this was canceled at short notice when the police said they would be unable to guarantee his safety! (They are very different writers, but in his ability to take on his own country, Koeppen reminds me of Tadeusz Konwicki, the great author of
The Polish Complex
and A
Minor Apocalypse.)

The upshot of so much vilification and repression was to repress Koeppen as a novelist. He wrote no more novels. In another one of his characteristic little bursts of activity, he published a series of three travel books on Russia, America, and France, in 1958, 1959, and 1961. The tone taken toward him was transformed: there was, one observer reports, not a single adverse review to any of these! In 1962—as a reward for good behavior, the cynic might say—he was tossed the Büchner Prize. Thereafter, there were many sightings and promisings of further novels—not least after Koeppen moved to Suhrkamp—some of them even fully equipped with titles and settings and plots, but nothing ever appeared. The commodity that Koeppen traded in became silence. Journalists lined up to question Koeppen about his silence—as they did in the United States with the octogenarian Henry Roth, who had been silent for sixty years—and courteously, helplessly, evasively, he received them. A distressing book of these encounters was published (
Einer der schreibt
[Someone Who Writes
], Suhrkamp, 1995), a cross between a bullfight and a game of grandmothers footsteps, painful to read:

I
NTERVIEWER
:
To put it another way, what do you do all day? Do you go for walks, do you watch TV?

I
NTERVIEWER
: What are you busy with?

Sometimes Koeppen tried to deny that he was silent, claimed that he was writing all the time. But that was only half true, as he was writing only the kind of occasional things that writers don't see as writing—and that only with the greatest difficulty. The huge 700-page collection of his prose scraps that Suhrkamp published in 2000,
Auf dem
Phantasieross (On the Wings of Imagination),
actually lays to rest the myth that he was all the time working on some secret project. Even so, to describe him as a victim of German circumstances is too easy. Certainly, his decorated silence must have been easier to live with for the nation and its opinion of itself than any further novels of the ilk of
The Hothouse
or
Death in Rome
, but writing and not-writing are both mysteries. Just because there are three novels doesn't actually say anything about the feasibility of a fourth. Our technical, assembly-line model for the production of novels is entirely inappropriate to a writer of Koeppen's distinction. Besides, if one looks at his career, it is clear that not-writing—or not-publishing—preponderates.

Writing was the exception, not the rule. Reckon it up, and you find maybe one productive decade in six or seven as a writer. There were spates or spasms of it, that is clear from the dates, but there was also an admirable, even a lovely quality of truancy about it.
Death in Rome
he wrote while he had another project—an Eulenspiegel novel—on the go; he got a ticket to Rome to attend a meeting of the Gruppe 47, cut the meeting, discovered Rome, went home, and wrote a different novel. For
The Hothouse
,
he spent a week in Bonn, then holed up in a bunker hotel in Stuttgart, his typewriter clattering up and down the concrete passages, and wrote his book in a few weeks. This quality of truancy, combined with violent necessity, has to be respected, and so, while—God knows!—I can understand the wish that there had been more books, I also understand that such a wish is unreasonable, and that it teeters along the boundary between gratitude and ingratitude.

The other writer about whom I have much the same feelings is Koeppen's coeval Malcolm Lowry (1909-1957), the author of
Under the Volcano.
There are some striking similarities between the two: earlier books in the thirties
(
Ultramarine
, in 1937); one extraordinary, unrepeatable, Joycean masterpiece (taking, for the sake of argument, Koeppen's trilogy as a single work) that casts its shadow over the rest of their lives; difficulties with manuscripts (Lowry lost one in a taxi, and another when his house burnt down; Koeppen claimed to have left one behind in Holland); a deep interest in films (Lowry and his wife spent years over their script of Fitzgerald's
The Last Tycoon
)
and music; the temptation to rewrite or double or shadow their masterpiece (Koeppen brought Keetenheuve back to life in some later fragments; Lowry wanted to write an
Under Under the Volcano
); the way that both of them, in a phrase of Lowry's biographer Gordon Bowker, were "Coleridgean projector[s] of schemes." In 1955, Koeppen reviewed the German translation of
Under the Volcano
in terms that might have fitted, say,
The Hothouse
: "It is an intellectual book, you might almost say a book written for writers, full of civilization, quotations, allusions, doubt and asperity, the song of a cerebral despair, a protocol of failure, a plumbing of the depths of the soul, a laying bare of the emotions and the heart. . . . The novel is told at a breathless pace. But its panting breath has the moving, burning sniff of great poetry. It is an intoxicating book. The words flow over the reader like a cataract and make him delirious. But they are also elevating."
Unter dem Vulkan
was published in 1951. I wonder whether Koeppen might not have read it at about that time—and before he wrote
The Hothouse.
But even if he didn't, the Consul and the MP are surely kin; and the cantinas and barranca of Quauhnahuac are surely adjacent to "the Spanish colonial death veranda" in Guatemala.