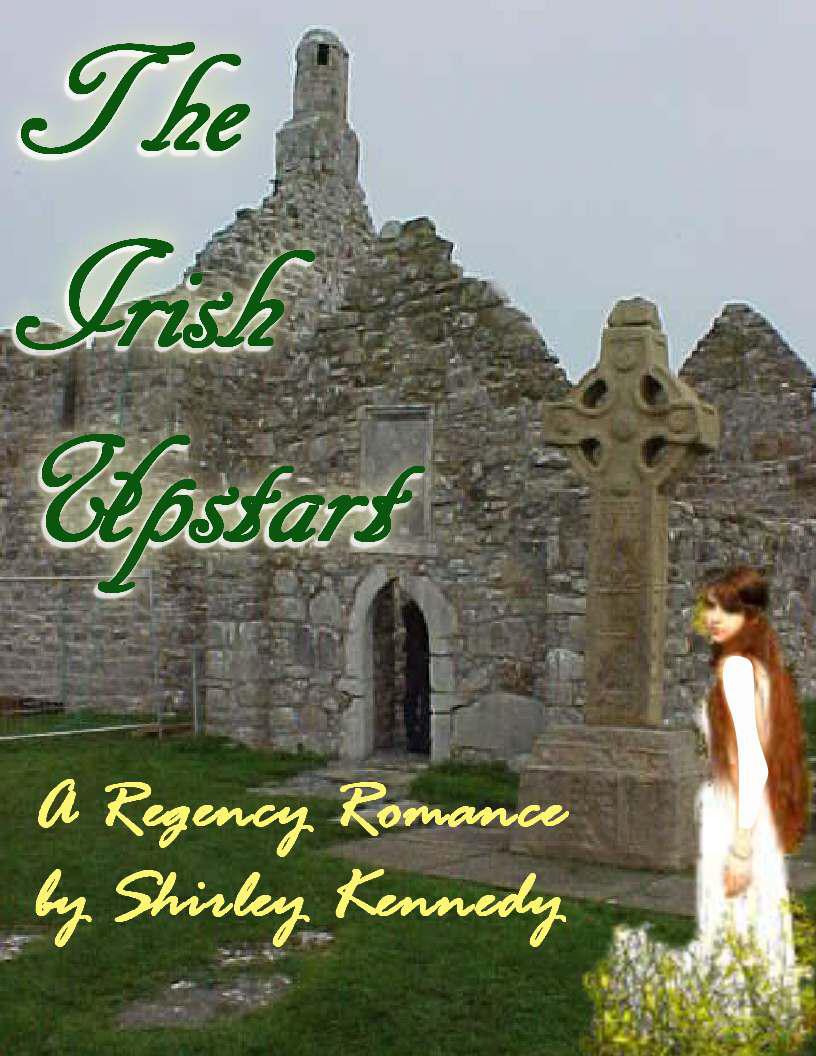 High-spirited Evleen O'Fallon comes from a humble cottage in County Clare, Ireland. Rich, handsome Lord Thomas owns one of the biggest estates in all England. "Never love an Englishman," warns Evleen's mother, but when Evleen and Lord Thomas undertake a harrowing journey across the Irish Sea, a love that knows no boundaries begins to bloom. Suddenly Evleen finds herself an outcast in London's ton. No one will marry a twenty-four-year-old Irishwoman, no matter how beautiful, but Lord Thomas's heart rejects convention and he cannot deny his attraction to the lovely Irish girl. Soon Evleen is faced with a decision: should she return to her simple life in Ireland or should she find in Thomas's arms a love that breaks every boundary?

A...tale with a determined, independent heroine and an equally strong-willed hero who both frustrate and fascinate one another. --
Romantic Times, April, 2001

A recent, wonderful trip to Ireland inspired me to write The Irish Upstart. I was especially impressed with the 6th century monastic site of Conmacnoise with its Whispering Arch where "courtin couples...stand one on each side, whisperin' heir words of love to one another." Of course, Thomas and Evleen stand in that very spot in the story!

THE I
RISH UPSTART

A Regency Romance by
Shirley Kennedy

Evleen O'Fallon
is shocked
when handsome
Lord Thomas Linberry
appears at her family’s humble cottage
overlooking Galway Bay
.
Just arrived from England, he bears the news that Evleen’s young half brother Patrick—born to the dissolute Englishman who stole her mother’s heart and spent her fortune—is the heir to a vast estate. Patrick
’s mother won’t let him go
to England with Lord Thomas
unless Evleen
accompanies him
.
Thus begins
Evleen’s
harrowing
journey from
her beloved Ireland
to England, where she finds herself an outcast
in
London’s
snobbish
high society.

The author’s
meticulous research of Ireland in
the 19
th
centuiry
brings authenticity to the story.
T
homas and Evleen’s romance
begins
under the Whispering Arch
at the ancient ruins of
Clonmacnoise.
It survives a
nightmare journey across the Irish Sea on
The Countess of Liverpool
.
They come from different worlds. Will their love survive?

This book was originally published by Signet

Copyright © 2011 by Shirley Kennedy All rights reserved. No part of this book may be reproduced or transmitted in any form or by any means, electronic or mechanical, including photocopying, recording, or any information storage and retrieval system, without permission in writing from the publisher.

Dedicated with heartfelt thanks to my many friends on the Internet who helped me with my research for The Irish Upstart.

They include Paddy Kavanaugh of Athlone, Ireland, who supplied me with information on Clonmacnoise, as well as Ireland’s early coaching days.

They also include the learned gentlemen of a certain maritime history group who went out of their way too supply me with details about the ships that sailed between England and Ireland in Regency times.  Many thanks!

Evleen O’Fallon took one last look around the drawing room of her Dublin townhouse and choked back tears. In all her fifteen years, this was the worst day of her life. She thought again and quickly corrected herself.
No, not quite the worst because the worst was five years ago when Papa died. That would make today the second worst . . .

No. The second worst was the day Mama married the Englishman
.

So today was third worst, no question. It was the day she must say goodbye to the only life she had ever known and face a life of . . . what? She had yet to see their future home, that small farm to the west, near Galway Bay.
“
It’s going to be fine,
”
Mama had assured them, but Evleen knew better. How could anything in the world be as good as the life she had now? What could replace her debut into the glittering Dublin society that she’d so looked forward to? Nothing. And Mama knew better than to promise there would be the same balls and soirees on the other side of Ireland in barren County Clare, which, as far as she was concerned, might as well be on the other side of the moon.

And all this thanks to the Englishman. Bitterness filled Evleen’s heart as she thought of Randall, Lord Montfret, whose lies and slick charm had fooled Mama completely. Despite all the warnings, Mama had married him. Then, just as friends and family predicted, he squandered her money, practically down to the last farthing, and then had the gall to up and die. Typhoid, the doctor said.

As a consequence, Mama had been compelled to sell their elegant townhouse on Lower Fitzwilliam Street, directly across from Merrion Square. Although the sale of the townhouse had fetched the tidy sum of eight hundred pounds, Mama, citing the family’s poverty, sold most of their possessions as well.
“
Don’t for a moment think we’re rich,
”
she warned.
“
We will no doubt have to stretch those eight hundred pounds for years to come.
”
As a consequence, there were no more jewels, baubles, and pretty clothes; no more servants, no more lady’s maid to help them dress and fix their hair...

Evleen squeezed her eyes shut.
Oh, I must stop this. I’m the oldest. I must remain strong, not only for Mama, but for Darragh, Sorcha, Mary and Patrick
.

Wrapped in misery, Evleen watched as two indifferent draymen removed the few fine things of Mama’s she’d decided to keep to the wagon outside. At least Mama had kept her needlework boxes, and, thank heavens, all the books they owned. Still, there were so many lovely things that, of necessity, would be left behind. Evleen glanced at the fireplace and called,
“
Mama, are you not taking the pole screen?
”
A lump rose in her throat as she remembered the countless evenings Mama sat by the fire with her needlework, her pretty face shielded from the heat of the flames by the elaborately carved mahogany screen.

Mama called back,
“
I think not, Evleen. I’ll have no use for it, not where we’re going.
”

Evleen felt her spirits plunge even lower, if that was possible.
“
But we’ll still have a fireplace. And you’ll still be sitting beside it.
”

Mama entered the room, sighing deeply, on her hip the baby, red-headed Patrick, who was just one year old.
“
That screen was used mainly to keep the wax in my makeup from melting. I won’t have much use for makeup now.
”
An ironic smile crossed her face.
“
Not unless I want to impress a bunch of sheep.
”
She lowered her voice and continued,
“
Lord and Lady Aimsberry are here.
”
At Evleen’s questioning gaze, she continued,
“
Don’t you recall? They’re the English couple who bought the house. They’re looking around in the library. Go ask if they’d like tea.
”

Evleen bit her tongue, but the words burst out anyway.
“
I still don’t see why you had to sell our beautiful home to an Englishman.
”

“
Because he has the money,
”
Mama answered in her usual blunt fashion. Just like her, Evleen thought. Even in the midst of adversity, Mama remained strong, accepting her unfair fate with wondrous equanimity. She even looked as beautiful as ever, despite everything, with her thick red hair pulled into a bun atop her head, her white skin flawless, her figure slender still, despite five babies. This new trouble had taken its toll, though. Lately fine lines had appeared at the corner of her eyes. Strain showed on her face, and her shoulders slumped, although ever so slightly.

I, too
.
Evleen caught a glimpse of herself in the looking glass. She much resembled her mother, tall and slender, with the same fair skin and blue eyes, although her hair was black, not her mother’s flaming red. With dismay she noted the rosy glow that usually brightened her cheeks had disappeared. Now, like her mother, her face was drawn tight by worry and strain.

“
I shall go ask if they would like tea,
”
Evleen said and made her way to the library door.

Inside she heard voices and immediately identified those unmistakable, lofty accents so characteristic of the English ton. She was about to enter when she heard a woman, no doubt Lady Aimsberry, ask disdainfully,
“
How long must we stay in this miserable, God-forsaken country?
”

A man’s voice, no doubt Lord Aimsberry’s, replied,
“
But surely you find Dublin quite civilized.
”

His wife retorted peevishly,
“
Dublin would be all right if it were not filled with the Irish, whom you know are inferior. Not far above savages, if you want my opinion.
”

Evleen heard a patient sigh, followed by Lord Aimsberry’s voice again.
“
Our stay will be two years at the most, until I see my bank is safely established. Meanwhile, you must admit this townhouse is every bit as elegant as ours in London. Note the magnificent ceiling plasterwork. And this chandelier. Magnificent! Genuine Waterford crystal, don’t you agree?
”

“
I suppose, but really, Edward, I cringe at the thought of residing where some shabby Irish family once lived. It’s all just so distasteful.
”

“
But my dear, the O’Fallons are not shabby,
”
protested Lord Aimsberry.
“
Mrs. O’Fallon is most cultured and refined. Quite knowledgeable, too, and with an appreciation of fine literature and art. In talking to her, I learned the family is descended directly from the Kings of Ireland who were descended from . . . er, the first Milesian king, Ollam Fodla, or some such thing.
”

“
Such rubbish. Who gives a fig for Irish nobility?
”

“
But her second husband was English.
”

“
Really? Well, if the second husband was English, what is she doing with that dreadful Irish name?
”

“
From what I understand, the marriage was quite hush-hush. Apparently the fellow fled England and was disowned by his family. Debts, apparently. Not long after the rascal arrived in Dublin, he married Mrs. O’Fallon, ran through all her money in no time flat, then up and died. And that, my dear, is why she is compelled to sell this townhouse.
”

“
To a piece of property that belonged to the scoundrel—his only legacy, apparently. I don’t envy them. From what I understand, it’s a wretched farmhouse and a bit of rocky land, enough for a sheep or two, I suppose, located on a desolate hillside overlooking Galway Bay.
”