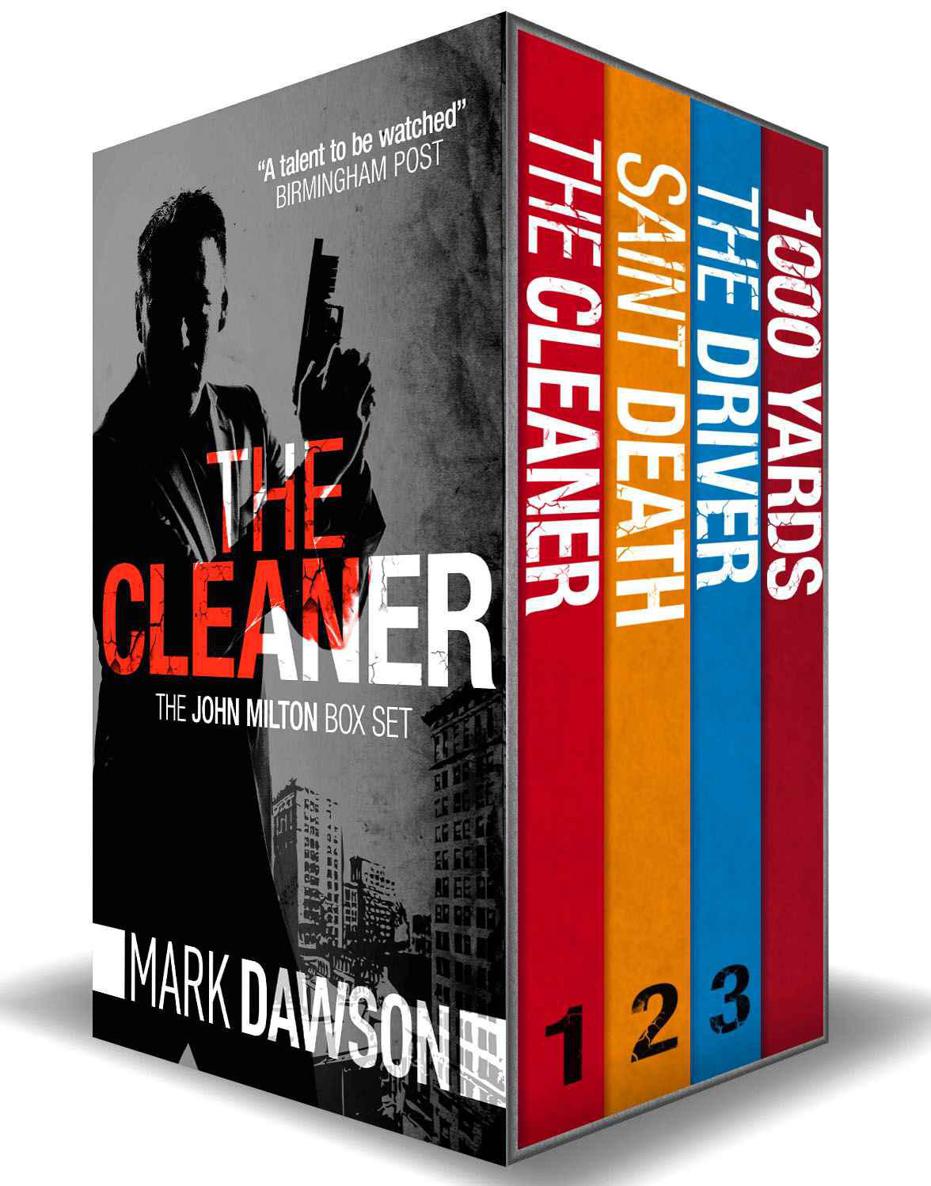 Sign up for the no-spam newsletter and get THE BLACK MILE, plus three introductory novellas and lots more exclusive content, all for free.

Details can be found at the end of the boxed set.

THREE HOURS into the flight and he realised he was about to have the dream again. The cabin was quiet: meals cleared, drinks served, lights dimmed. Just the steady drone of the engines. The other passengers were relaxing, some of them beginning to sleep. He reached for his gin and put it to his lips. His hand shook; the ice cubes rattled against the side of the glass.

It did not come often now. He had made it that way, with the force of his will, yet on those occasions when the dream did overcome him, it came with all its old strength and vigour. He knew the signs: that familiar feeling of being hollowed out, an empty vessel into which it would pour. Fatigue weakened his defences, and he had not slept for two days. He squeezed his eyes shut and gripped the armrests so tightly that his knuckles whitened. His shoulders locked, and the muscles behind his knees and in his calves tightened. He sagged back into the seat, trying to breathe normally but knowing that he was gulping each breath. He was helpless, impotent, and paralysed.

He squeezed his eyes tighter, so hard that tiny pinprick explosions of red and yellow light cascaded against his lids. The dream raced towards him like the pitch- black mouth of a tunnel, inexorable and unavoidable, and suddenly he was plunged into it. It was as vivid as reality. As it started to unspool, like a familiar film he tried to hide away in a dusty box, his rational mind was able to observe and assess it, to compare it with the past, and to acknowledge that he was far from cured.

The cheap plastic football swerving in the wind.

The plane coming in fast and low; the roar of its engines echoing through the valley.

The P.M. asked for further information on last month’s attacks. I therefore attach a report originated by STRATFOR, which apparently confirms what we suspected to be true. I note that our American friends have reached the same conclusion, and that they share our frustration at the impunity with which the DPRK is acting in this regard. They concur with us that the time has come to let them know that there is a red line beyond which they must not cross, and that consequences will flow if they do. I know that the ambassador has reported these sentiments to you.

If there is any follow-up once the P.M. has considered this intelligence, please do, as ever, let me know.

The P.M. thanks you for your prompt response to his query. He has discussed the issue at high level (including, I believe, with POTUS), and given the excellent assets that you have secured within the DPRK, approval has been given for you to investigate whether there is something that we might do to give them a bloody nose. This latest attack follows the endless posturing with their missiles and the attacks on S.K. assets, and as I indicated in my previous email, it has long since reached the point where something must be done. US assistance is available if you deem it necessary, but knowing you as I do, I suspect that you will want to make a demonstration of our effectiveness when working alone. (I can also report the P.M.’s support for that sentiment.)

I wonder whether this might be something for our mutual friend? This is, of course, eyes only.

My regards to you and your wife,

I forward the email that I received from the Foreign Secretary yesterday. We have a cell of three indigenous agents active within the DPRK, and while we have no reason to believe that the Politburo is aware of their existence, they are not equipped with either the training or the materiél to mount the kind of operation (which you might charitably describe as audacious) that is currently on the table. Group Fifteen, on the other hand, does not have those problems. You have been tasked with considering whether it is practical to work with our assets in the DPRK in this regard, possibly involving an agent from the Group. How practical would it be for you to insert one?

I have given consideration to your request. It can be done, and I attach a way in which it might be carried out. You are right to describe it as audacious; as you well know, the DPRK is the most difficult state on Earth within which an enemy operative may operate. I am confident, however, that this plan will deliver an agent into the country, and once there, the man I have in mind will have a fighting chance of giving the generals the black eye the P.M. intends.

I wait for confirmation that the course that we have suggested has been approved.

We have confirmation from both the P.M. and Washington. The plan that you outline (including assistance from assets in the south of the PRC) is approved. Of course, the existence of this plan—and of your operative, should he be compromised—will be denied should it ever come to light. Standard operating procedure in that regard.

You are on your own: there will be no further correspondence on this matter.

John Milton heard the woman’s voice and prised open his eyes. He was feverish with sweat.

A pretty stewardess in a red Air China uniform was peering down at him, concern on her face.

Milton looked to his right. The passenger on the other side of the aisle was looking at him anxiously. “Sorry—”

“Is everything all right, sir?”

“Yes.” He wiped the sweat from his eyes with the back of his hand. “It’s fine. I’m a bad flyer. Must’ve been the sleeping pills. Really, I’m fine.”

He took out a handkerchief and wiped his forehead dry. His breathing returned to normal, and his muscles loosened and relaxed. “Where are we?”

“We’ve landed,” she said, with a sunny, surprised smile.

Milton sat quietly for a moment, letting consciousness slowly return. How long had he been out? He remembered eating the tasteless meal, then a drink as he watched them cut across the clouds, and then … and then, he couldn’t remember. An hour? Two hours? He had thought that he had mastered the blackouts, that he had forced them away, but this was the third time in a week. There had been one in London and then another in his hotel room in Beijing. He couldn’t ignore it any longer. They were getting worse, and for a man in his particular line of work, that was a very bad thing indeed.

He concentrated on putting his worries aside. This was no time to be weak. He waited patiently for the queue of passengers to disperse, and then, after grabbing his carry-on luggage from the overhead locker, he disembarked, a little unsteadily, descending the flight of stairs fixed to the back of a pickup truck that had been parked up against the fuselage of the Air China 737.

He stepped down onto the tarmac of Pyongyang Sunan International Airport.

It was an unseasonably cold spring afternoon, and the wind carried in great gusts of icy rain. There was no bus to transfer them to the terminal, and the walk was unpleasant. Milton was hatless, holding a copy of the Chicago
Herald-Tribune
over his head, the other gripping the handle of his bag. The newspaper was quickly sodden. He set his jaw to the cutting wind; there was nothing to be done to prevent it whipping between the folds of his jacket, and it did not take long for him to feel cold to the bone.

Welcome to North Korea
, he thought.
How I’ve missed you.

HE KNEW that he would be photographed as he crossed the tarmac, and he was. There was an office with wide windows overlooking the taxiway. It was occupied by the Ministry for the Protection of State Security, a sprawling organisation which had been modelled upon—and developed with the willing assistance of—the Soviet KGB. The operative in position today toted a Canon digital camera with a powerful telephoto lens. His duty was to capture pictures of every passenger who disembarked from a foreign flight.

Milton’s photo was already being uploaded to the Directorate as he passed through the double doors into the arrivals lounge. To describe the facility as “international” was to be generous: apart from the flights to and from Beijing, the national carrier—Air Koryo—was responsible for the only other flights. Milton glanced up at the departures board and saw international flights to Bangkok, Khabarovsk, Kuala Lumpur, Moscow, Shanghai and Vladivostok. Indeed, “lounge” was also somewhat of a misnomer: the wide space was equipped with a handful of hard metal benches, its whole purpose to funnel travellers towards the customs and security officials with the minimum of fuss. It was the absences that really struck home: no advertising of any sort, no planes coming and going, no duty-free.

The lounge was not much warmer than its exterior, but Milton took the opportunity to unbutton his overcoat and wipe some of the water from his face. His fellow travellers obediently took their place in line and waited to be called forwards to the kiosks. Milton cast his eye over them once again. There was a group of four European tourists and a number of Koreans returning home. Most were Chinese businessmen, sanctions-busters arranging deals to bring luxury goods into the country for the benefit of the ruling elite. That was what Milton was here to do, too; at least that was what he wanted them to think.

The queue shuffled forwards. The Chinese were processed quickly and with good manners. The Europeans took a little longer. Milton took out his smartphone and thumbed it to life. It picked up the Koryolink telephony network, but there was no mobile internet, and there would be none for so long as he was in the country. He switched it off and put it back into his pocket.

Eventually, he was beckoned forwards by a curt and officious-looking man.

“Your bag,” the man said, nodding his chin at the X-ray machine.

Milton laid it on the belt.

Milton managed to smile as he did what he was instructed; it was the patient and forbearing smile of a man who was used to these ministrations. His name, for the purposes of this trip, was Peter McEwan. The bag slid through the machine, pausing within it as an official studied the monitor that was displaying the X-ray. Milton knew that what he saw, or did not see, in the image would have no bearing on what happened next, and in that, he was right. There were three other officials standing at the end of the belt. Milton knew that they were from the MPSS, and he was not surprised when one of them stepped forwards to haul his case from the belt.