Read The Lady and the Locksmith Online

The Lady and the Locksmith 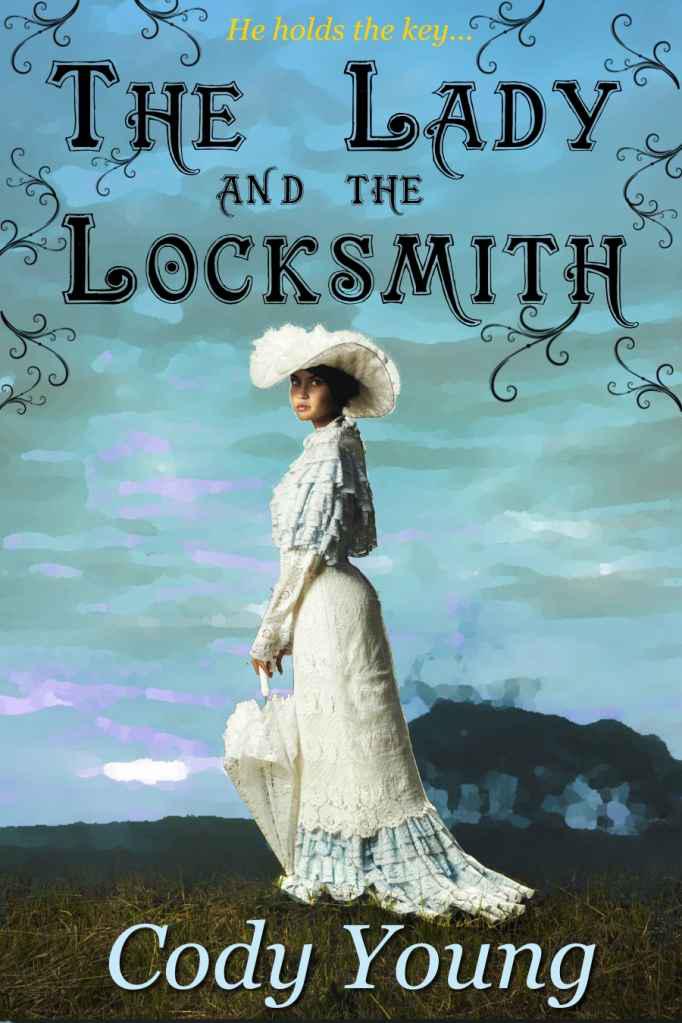 The Lady and the Locksmith

This is a work of fiction. Names, Characters, places and incidents are either the product of the author’s imagination or are used fictitiously. Any resemblance to actual persons, living or dead, organizations, events or locales is entirely coincidental.

Scandal at the Farmhouse

For more information about this author visit:

C
ARL HOPED THE PARLOURMAID would answer the door, because he was very fond of parlourmaids. He rang the bell and stepped back to wait for a reply, enjoying the warmth of the sun on his shoulders. It was a grand house he’d been sent to today, built of stone and set back from the road, in an avenue where doctors and lawyers liked to live. If the maid who worked here was pretty, he was in for a fine afternoon.

Carl knew he had a certain look about him, and a twinkle in his eye. His father had been a Swedish sailor, and it showed. He saw a figure through the frosted glass, and he reckoned he might be in luck. A girl, in a long white apron, approached and opened the door. She had long chestnut-coloured hair tied up in a simple knot and wary hazel eyes. She studied him for a moment without saying a word.

Carl suddenly felt acutely aware of his own appearance. He snatched off his cap, and gave her a winning smile.

‘You sent for a locksmith, Miss?’ he said.

She nodded, seeming a little shy.

‘Carl Janssen. At your service.’ He wished he’d worn his other neckcloth, and cleaned the mud off his boots last night.

Wordlessly, she led him through to the back of the house, down to the basement, and showed him the door that wouldn’t fasten. She gave no explanation as to why she needed a locksmith, but that seemed unimportant. Nine times out of ten, Carl could work out what had happened just by looking at the lock.

He whistled under his breath when he examined the door. ‘What have we got here, then?’ he said, running his hand down the edge of the door. ‘Looks like someone smashed through it in a flaming temper!’

Several attempts had been made to pick the lock. There were scratches on the brass fitting, and gouges in the wood. But obviously the lock hadn’t yielded, so the culprit had found himself a chisel or something and smashed his way through, breaking the mechanism completely, and taking part of the lintel off with it. Whoever did this had been very determined to get at whatever was on the other side, Carl concluded. But why? This door guarded no special secrets. All it led to was a little outhouse with a small high window - the type of room that might have been a laundry room in the past - and beyond that was the garden, with its high brick walls around it.

Carl looked up in surprise, and gave her a grin. Ah, she was a sight to brighten a man’s heart all right, with her trim little figure and her innocent eyes. ‘Thieves trying to get into the house would have broken it from the other side,’ he pointed out.

She offered no further explanation, so he smiled and set to work. He knelt down by the door, and opened his heavy tool bag to find what he needed to replace the lock. To his surprise she didn’t go, but stayed to watch him work. She hovered near him pretending to carry things to and fro in the hallway. Very distracting she was too, flitting about all the time, with her little buttoned boots passing right beside him and her skirts swirling, giving him tantalising glimpses of shapely ankles and frothy cotton petticoats underneath.

‘Nice house, this,’ Carl observed, in a friendly tone of voice, hoping to get her to chat. It was indeed a lovely place - grand and well-appointed. There was expensive furniture everywhere, and good carpets, even in the basement.

‘Yes,’ she murmured. She seemed distracted.

‘Who does it belong to, Miss, if you don’t mind my asking?’

There was a long pause as if she needed to weigh up the answer. ‘A merchant, I believe.’

But she said nothing, which he thought was a bit of a shame. He would have enjoyed chatting to a sweet little thing like her. He knew he was handsome and wholesome looking – with his honey blonde hair and his blue eyes – but maybe this little maid didn’t go for that sort. Maybe she was walking out with a young man already. In fact, it would be odd if she wasn’t.

She would not be drawn into conversation with him, so Carl started to sing a ballad he knew.

I’ll wed you to my youngest son, and ye shall be his bride…’

At first he sang softly, under his breath, as he worked away at removing the broken lock, and then a little louder, as he checked the mechanism to see if it could be salvaged. It was broken, that was for sure. He’d have to go back to the shop to look for another one like it. Soon, he stopped feeling self-conscious and sang out the words of the chorus, in his full rich tenor voice.

‘
But oh, she let the tears down fall, for Jock O’ Hazeldean!’

Carl realised the shy little maid was standing entranced, watching him work, listening to him sing. And when he reached the end of the song, he looked up and he saw, to his intense embarrassment, that real tears glittered down her face as she turned away. He stepped nervously to his feet.

‘Beg pardon, Miss, do you want to borrow my handkerchief?’

She had brushed most of the tears away with the back of her hand, but she nodded and accepted his offer. He gave her his clean white handkerchief and she took it and dabbed her face. He stood there, uneasily, watching her struggle to regain her composure.

‘Is it a song that brings back memories for you?’ he said, and gave a slight cough to cover his awkwardness. Inwardly, he cursed himself for his curiosity, telling himself he should leave her be.

She nodded. ‘Memories of my mother,’ she said. ‘Long gone. But it was wonderful to hear that song again. It made me feel so happy.’

‘Oh, good,’ Carl said, with a perplexed frown. She didn’t look happy. Never in a million years, he decided, would he fully understand women.

After a slight pause, he decided he’d have to tell her the bad news about the door.

‘I’m afraid I’ll have to slip back to the shop, Miss, as this lock can’t be repaired. There’s a piece of wood here that must be made good, too.’ He showed her the place where it had splintered away. She reached out and touched it and her warm hand grazed his, sending a shot of pleasure through his body like a whiskey on a cold night.

She bit her lip, and looked very worried. ‘But … you will make it look just as it was before, won’t you? And you can mend it today, before eight o’clock?’

‘Yes, of course I can. I can do anything with these hands of mine,’ Carl said, with a likely grin, for he was confident and proud of his skill. ‘It can be made good as new, Miss, no need to worry.’

So Carl trudged back to the shop, thinking all the time about the little wench who had quickened the beat of his heart. There didn’t seem to be any other servants about, he reflected, but that wasn’t all that surprising. It was high summer and the owners of the house were probably away on holiday. They would have taken most of their people with them, and left only a skeleton staff. That entrancing girl with the bright eyes and the pretty ankles would be one of them – and she wouldn’t want anyone to think she hadn’t been looking after the place.

He went to the back of the shop, to the workshop beyond, and searched until he found the fittings he needed to take back to the house. He even found a little bit of leftover paint in a can, and he wrapped it up and put it in his tool bag to take with him, planning to touch up the place where the wood was broken. The girl seemed so very anxious that no one should know about the broken lock, and this was something he could easily do for her.

Carl’s boss stopped him on the way out, wanting to know why it was all taking so long. ‘What about that other job on Lake Road, lad? Are you still planning to get that done this afternoon?’

‘No, sir. I’ll have to look at that in the morning,’ Carl said, heading briskly for the door before he got asked any more questions. ‘This one’s turned out a bit more complicated than I thought.’

‘Oh I
see
. Complicated is she?’ said the older man, looking over the top of his gold-rimmed specs with a disapproving frown.

‘Nothing I can’t handle,’ Carl said, with a smile. The shop door jingled merrily as he left.

It was quarter to seven before Carl finished working on the lock. Normally he would have finished much earlier and gone home to his lodgings for supper - but he’d promised that he would make the damage good for her, and he was a man of his word. At last it was done, and he straightened up and admired his handiwork. The girl was pleased, he could tell, and she thanked him profusely.

‘You are very clever,’ she said, turning the key back and forth in the lock, admiring the way it worked so smoothly.

Carl packed up his tools, and all the time he was aware that she was watching him, and though she didn’t say a word, he sensed she was sorry to see him go.

That’s when he realised his mistake.

Her voice. She had a lovely clear voice - she spoke kindly, with no condescension - but she was posh, he could see that now. This girl was no parlourmaid. He wasn’t sure what she was, except that she was not in his league. Carl experienced a pang of deep disappointment. He had really warmed to this little miss. But before he could ask her why she had misled him, she spoke again - more boldly than he was expecting.

‘But the master of the house has run out of brandy,’ she said. ‘And he is very fond of a glass of brandy. Do you think I might be able to buy some at the Three Bells?

Carl was astonished. A shy little thing like her, talking about the local tavern. ‘You would indeed – but it’s not a place a lady should venture into,’ he replied.