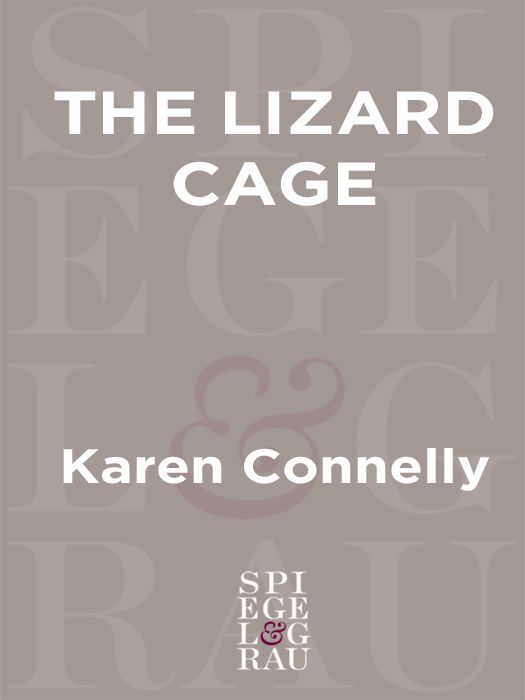 PRAISE FOR
THE LIZARD CAGE
BY KAREN CONNELLY

“When the world becomes thus inured to the ghastly crimes of faraway regimes, it is left to artists, writers and filmmakers to re-engage our attention. [Karen Connelly] does exactly this with
The Lizard Cage
, a thrilling, depressing, vital excoriation of the military junta that has ruled Burma for decades. Ms. Connelly’s novel is grounded in the accounts of those who survived Burma’s jails and escaped to the Thai border. She spent two years on the border living among exiles. Her language and imagery evoke the short stories and poems that trickle out of Burma, by turns fearful and violent, beautiful and rancid. They speak equally of spiritual and physical escape, the one always possible even when the other is forcibly denied.”

“In this hymn to ‘raw paper’ and ink, language is endowed with the power and agency of a living creature … Connelly shows in unflinching detail how pain becomes a prison in itself … A chilling and powerful story.”

“Among the saddest and most beautiful novels you might ever read … Some books inspire us with the beauty of words and words’ rhythm. Some move us to action with their political observations. This book does that and more; it shows us how to be good.”

“Connelly’s novel combines a thrillerlike pace with finely etched portraits that show how each character takes control of his own freedom.”

“Brave … Jealousy and self-interest are pitched against justice and human decency as [protagonist] Teza unwittingly becomes the subject of a struggle between his allies and his enemies … an expertly constructed, often harrowing thriller.”

“In this novel, there is a restless search for truth in a complex and sometimes tarnished world … Perhaps this book, by shedding some light on the brutality and abuses in Burma, by giving voices and faces to those who silently suffer, can stir the conscience of the wider world more effectively than all the dry reports and statistics and polemical tracts. In this sense, Connelly reminds me of Latin American writers and poets like Pablo Neruda, who wrote so eloquently about the ills of their homelands. Like these writers, too, Connelly finds beauty and kindness and the potential for redemption in the most unexpected places.”

“
The Lizard Cage
explores the agonizing saga of ordinary people resolutely seeking freedom and democracy in a long-forgotten corner of the world.”

“
The Lizard Cage
is an elegy to a country being strangled by a vicious regime … The Buddhist doctrine that runs through the novel is played lightly and with humour to provide a story of tragedy and hope.”

“Connelly’s astonishing characters, her carefully-constructed plot, and her poetic language combine to produce a flawless, if heartbreaking, novel that is hard to put down and impossible to forget … As disturbing as much of the novel necessarily is, faith in humanity becomes its overarching message.”

“A tale that by turns delights, surprises, and shocks. But even when writing of some of the darkest depths to which humanity can sink, her poet’s heart shines through … The resiliency of the human spirit is the beacon that informs this work.”

“
The Lizard Cage
is ridiculously and beautifully cinematic … Connelly is an exacting writer.”

“Not only heart-stirring but epic.”

“Offering a graphic account of prison life: its violence, betrayals, surprising kindnesses—and how it’s possible to survive it—this absorbing novel explores different paths of resistance whilst explaining and illustrating the practices and principles of Theravadan Buddhism.”

A hardcover edition of this book was published in 2007 by Nan A. Talese, an imprint of The Doubleday Broadway Publishing Group, a division of Random House, Inc., New York. It is here reprinted by arrangement with Nan A. Talese. Originally published, in different form, in Canada by Random House Canada, Toronto, in 2005.

SPIEGEL & GRAU is a trademark of Random House, Inc.

The possessor of this stone can fly in the air, and dive not only under water, but underground. He cannot be wounded as long as he has this stone on his body, that is, in his mouth, under his hairknot, in his hands, or under his armpits. He will be free from fatigue and disease … [These] powers do not really belong to him, but only to the stone, which by mere touch can turn lead into silver and brass into gold … Thus, when an alchemist has discovered the “stone of live metal” he exposes himself to the danger of being robbed of it by evil spirits or jealous rivals … Evil spirits will be on the lookout for him out of sheer malice, but the jealous rivals wish to eat his body, because by eating it, they will come to possess superhuman strength
.

W
hen the historical events described in this novel took place, the military dictatorship—which still controls Burma today—had a different name. The ruling generals called themselves the SLORC: the State Law and Order Restoration Council. In 1989, after they had arrested and killed thousands of protesting citizens nationwide, the SLORC arranged public elections. The leader of the National League for Democracy, Aung San Suu Kyi, won by a landslide. But there was no victory party; the regime refused to hand over power. Months earlier, Aung San Suu Kyi had been placed under house arrest. Six years later, in 1995, she was released for a time, but she has spent much of the past decade under increasingly brutal surveillance and house arrest.

Because of more than four decades of authoritarian rule, hundreds of thousands of refugees live in precarious conditions on the Thai-Burma border; political dissidents there and abroad continue fighting against the dictatorship from the outside, as do various ethnic armies. Burmese people remain prisoners in their own country.

In the meantime, the dictatorship illegally changed the name of that country to Myanmar and renamed itself the SPDC: the State Peace and Development Council.

T
he boy was twelve years old when he entered the Hsayadaw’s monastery school. As the newest novice, he soon possessed the smoothest bare head; he was given dark ochre robes and taught how to wear them. With his scavenger’s eye for opportunity, he saw how lucky he was. The men here gave him food, and a mat to sleep on beneath a wooden roof. He saw also that the school was a poor place, but the monks who ran it were generous with what little they had.

This didn’t stop him from jealously guarding his own possessions. He even refused to be parted from his filthy blanket. The monks said it should be thrown away, but he insisted on washing the thick swath of Chinese felt himself. When it was dry, he folded it with haughty care and placed it on his sleeping mat. The old Hsayadaw—abbot of the monastery school—observed this patiently, accustomed to children who clung to the relics of their old lives.

Because the boy had never been to school, he received lessons from his very own tutor, but sometimes the Hsayadaw excused the tutoring monk and sat down to teach the child himself. This seemed like a favor to the tutor, but the truth was that the abbot enjoyed teaching the boy. He had run the monastery school for more than forty years, and this was the first time he’d
ever seen an illiterate child dedicate himself so passionately to the alphabet. Learning his letters made the boy shine, and the old man liked to sit in that clean, honest light. They were both happy during these lessons, and their happiness made them laugh at almost nothing, a bird shooting through the leaves beyond the glassless window or the voice of the papaya seller in the street, calling out the sweetness of her fruit. More than half a dozen times, in the middle of the night, the Hsayadaw caught the boy with a candle burning and a notebook open in his lap, his grubby hand drawing the thirty-three consonants and fifteen vowels of the Burmese alphabet over and over, and he had to force himself to be stern when he sent the child back to bed.