The More the Merrier (2 page)

The whole Rosemarys' table looked over at me very surprised.

“For one,” I said, “you have to win the spelling bee before you can plan the party. For two, it's a class party, and everyone is included.”

“That must be the sound that a herd of magical unicorns makes,” said Charlie.

Mr. Harrison finished up talking to Mrs. Kirk and shut the door. “Cinderella, are you leaving us?”

“She couldn't go anywhere anyway,” said Rosemary T. “She's not wearing one of her shoes.”

I looked down, and only one of my turquoise Converse sneakers was on my feet. I wasn't too surprised, though. I have a habit of taking off my shoes when I'm sitting at my desk. This is A-OK with Mr. Harrison too as long as I put them on again before I go anywhere.

I was about to slip my shoe back on, but Rosemary T. was whispering to Rosemary W. and pointing at my feet. Instead, I pointed my toes like we do in dance class and waved right back at them with my sock feet underneath the table.

“D
id you bring tuna fish again?” Rosemary T. asked when we got to the lunchroom.

“Yep.” I put an empty seat between us so she wouldn't have to be too close to my sandwich. “It's my new favorite.”

“It smells so gross,” she said.

“You told me that yesterday,” I said. “Just breathe through your mouth and you won't have to smell it.”

“I have peanut butter and jelly.” Rosemary W. sat in the empty seat between us. 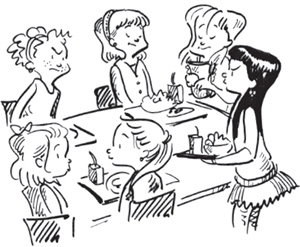 “I have yogurt.” Hannah sat across from Rosemary T.

Erin and Abby plunked their lunch trays down across from me. I never bought lunch, so I was always very interested to see what they were serving. Today it was grilled cheese sandwiches and carrots and orange slices.

“Hey, school lunch is all orange today,” I said.

“Or peas,” said Erin. “Cinderella, I'll trade you half of my sandwich for half of yours.”

“Deal.” I handed her the half I hadn't bitten into.

“After she eats tuna fish she is,” said Rosemary W.

Erin looked at me and rolled her eyes and held up her tuna half.

I held up mine too, and we touched them together, just like when people toast with glasses.

“
What
are you
doing
?” asked Hannah.

“We're cheers-ing,” I said. “We always do that when we're eating the same stuff.”

Nobody said anything to that, and our part of the table got very quiet. Everyone kept eating, except me. I couldn't swallow on account of the lump of sad in my throat.

Rosemary T. finished her lunch and stood up. “Let's go.”

Rosemary W. and Hannah stood up too and followed Rosemary T. over to the garbage can. Abby took one last bite, shrugged her shoulders, and followed them out of the lunchroom.

“I am getting very, extremely tired of Rosemary T. and all her meanness lately,” I said.

“Lately?” said Erin. “She's been this way ever since I've known her.” Erin was the new kid this year, so she had only known Rosemary T. for a little while.

“I guess she has been pretty mean all year, but she didn't used to be.”

“Nope,” I said. “We've lived by each other ever since we were born, and we were always pretty good friends.”

“But right about now I am very sad and mad at her,” I said. “I would also really like to call her some bad names, if I was allowed.”

“You mean like
dumb
and
rude
and
awful
and
stupid
?” asked Erin.

“I'm not allowed to say things like that either,” she said.

“I guess
our
mothers
did
teach us that thing you said before.”

“Me neither,” said Erin. “We might just have to stop talking to her.”

I thought about that for a minute. “I think you're right. I think we're going to have to give her the silent treatment.”

We headed out to recess and did not go play four-square with the Rosemarys. Instead we went and sat on our favorite bench by the basketball courts.

“Do you want to come over and study spelling this weekend?” asked Erin. “My stepdad got me a big book all full of spelling words.”

“That would be awesome,” I said.

“Wouldn't it be great if we both won and got to plan the class party together?”

“Even if we don't win,” said Erin, “we have to beat the Rosemarys.” 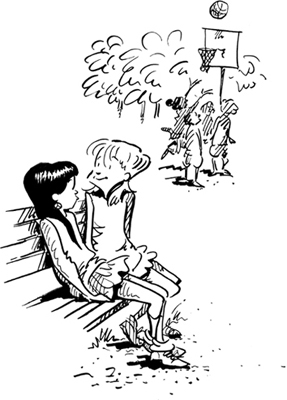 “We'll have to be careful she doesn't find out how hard we're studying,” said Erin.

“It'll be our super top secret,” I said.

“Be sure to have your mom call tonight,” I said. “My parents leave on their trip tomorrow.”

“Your Aunt Flora is coming to stay, right?” said Erin.

“Flora's awesome.” Erin knew that because my Aunt Flora was her dental hygienist.

“I'm glad you like her,” I said. “Not everybody likes going to the dentist.”

“Well, I do,” said Erin. “I like the TV to watch while your teeth are getting clean and the prizes afterward.”

“Me too.” I had to yell, because the bell rang, saying lunch recess was over.

When we got into class, we had gym and then math and then Table Book Talks. That is something Mr. Harrison invented, and this is how it works. We read any book we want and then we take turns giving a book talk at our table, just like a real-life librarian. We're supposed to speak slowly and clearly so our audience can understand us and start with the title and author and the book's Main Theme. The Main Theme means what the book is mostly all about. Next we have to give a few examples that support the Main Theme. At the end of our talk we can recommend the book to our table if we think it was really good.

“I'm reading
Dinosaur Dining
by Natalie Ann Westberg. It's mostly all about what dinosaurs used to eat, and that is the Main Theme. To give a few examples of this,
Diplodocus
was a herbivore, and
Megalosaurus
was a huge carnivore and might have been a scavenger too.”

“Does
-ur-
before mean âvegetarian'?” I knew
carnivore
meant “meat eater,” but I wasn't sure about that
-ur-
thing.

“I'm only to the
N
s,” said Logan, “but I would highly recommend this book.”

“It sounds vexylent.” I tried out a new word I'd just come up with then and there. Like I mentioned before, one of my favorite things to do nowadays is invent new words. When I come up with a really good one, I send it to the dictionary people and try to get them to add it.

Logan pricked up his ears because he likes vocabulary words too. “Is that good or bad?” 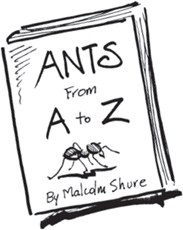 “I'm reading about
Ants from A to Z
by Malcolm Shure.”

“Speak slower and clearer,” said Christopher. “Jack is talking so loud I can't hear you.”

Trevor started again. “I'm reading about
Ants from A to Z
by Malcolm Shure. It's mostly all about ants, but it does talk about bees a little; but ants are the Main Theme. It starts with army ants and ends with weaver ants. Those are my two examples.”

“Does it talk about ant farm ants?” I asked. “Tess just got some, and we don't know much about them.”

“I'm not sure,” said Trevor. “I'll do some research and let you know.”

“And also I would highly recommend this book,” he added.

I gave him a thumbs-up for using my word.

I was about to book talk my book, which was
Poppy and Rye
by Avi, but the bell rang and that meant it was the end of school.

“We'll finish up with these Monday,” said Mr. Harrison. “Remember, next week is a busy one. There'll be spelling bees Monday and Friday, and in between we have visitors stopping in to tell us about their careers. Have a great weekend, everyone!”

Everyone told him to have a great weekend too, and we went out to get it started.

Playing at Love by Ophelia London
shadowrun 40 The Burning Time by Stephen Kenson
Until Tomorrow by Robin Jones Gunn
The Man in the Window by Jon Cohen, Nancy Pearl
The Marquess and Miss Davies by Amy Lake
His Needs: Billionaire Alpha by Ali Parker
Flat-Out Sexy by Erin McCarthy
War Baby by Colin Falconer
Mobile Library by David Whitehouse
Scenarios - A Collection of Nameless Detective Stories by Bill Pronzini