The More the Merrier (9 page)

S
ince it was really, really raining the next morning, we got to go right up to our classrooms and not stand outside and get soaking wet. We could sit wherever we wanted to before the bell rang, so I sat next to Erin at her table and told her all about Rosemary T.

“I know,” I said. “I was very, extremely surprised at how my what's what turned out. I figured I'd tell Rosemary T. how I was really feeling, and the air would clear and that would be that. Then she would go back to her old self, and things would be like they were before.”

We both sat there all quiet, and I spun Aunt Flora's bracelets around and around my wrist. 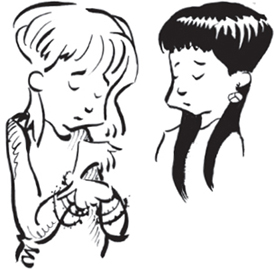 “I like your bracelets,” Erin finally said after lots of minutes.

“Thanks. My aunt said I could keep them forever as a reward for catching Miss Purvis.”

Kristy and Olivia came in and sat down in their places at the table.

“Have you been studying a whole bunch, Cinderella?” asked Kristy.

“Good,” said Olivia. “Because we're all counting on you.”

“Yeah,” said Kristy. “I think the whole class is, except the Rosemarys' table and Zachary.”

“I want to win for sure,” I said. “But if we happen to end up having a unicorn party, I don't think it will be too, too terrible.”

Nobody said anything, so I said a little bit more. “Even if you don't believe in them, I think you could still have fun.”

“It's more than just the party,” said Olivia. “It's the Rosemarys.”

“Yeah,” said Kristy. “It's all their clubs and how they leave people out and call people names.”

“I couldn't believe they called you a baby in the middle of the lunchroom,” said Olivia. “You're one of their best friends.”

“Not anymore,” I said. “Rosemary T. told me she doesn't want to be friends, and she kicked me out of all of her clubs.”

Kristy started patting me on the back to make me feel better. “I'll be your friend.”

“Thanks,” I said. And then I had an
AHA!
“Maybe we could start our own club.”

“What should we call it?” asked Kristy.

I had been nervous about the whole spelling bee thing, but when we got to school that night I got even very, extremely, more nervous. There were eighteen chairs smooshed across the stageâsix for fifth graders, six for fourth graders, and six for third gradersâthree from each class. Mrs. Bentley, our school secretary, called all the spellers to the stage and put us in seats alphabetically. I ended up between a fourth grader named Isaac Shaffer and Rosemary T., which was a little bit awshucksible. She gave me mean stink eyes like she'd been doing all day and sat on the very edge of her chair away from me.

“Welcome to the tenth annual Laurel Hill Elementary School Spelling Bee,” our principal, Mrs. Shu, said. She started to go over the rules, and I started to pay very good attention and forgot all about Rosemary T.

“Rule number one, the contest shall be conducted in rounds. Each speller shall spell one word per round, and applause shall be held until the end of the round.” Mrs. Shu looked very serious at the audience. I did too, because I was looking to see if my mom and dad were there yet; but there were still two empty places next to Aunt Flora. 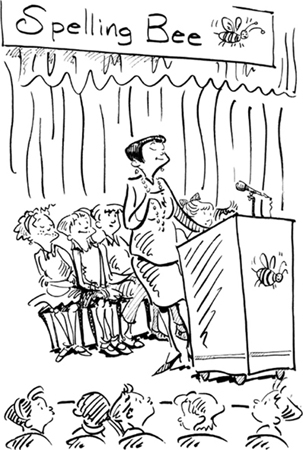 The audience started to clap and then stopped. They must not have known if that counted as the end of a round or not. 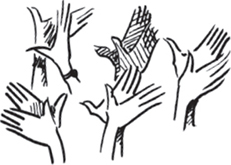 “Let's begin.” Mrs. Shu nodded to Melissa Allen, a fourth-grade girl who walked up to the microphone.

“Miss Allen, your word is
agreeable
.”

Someone started to clap but then they remembered the rules and stopped.

A third grader from the other class went next.

“Mr. Bingham, your word is
already
.”

Finally it was my turn. I walked up to the microphone a little shaky.

I smiled and looked out at the audience to where Aunt Flora and Tess were sitting. The two empty places next to them weren't empty anymore! They were full of my mom and dad! They smiled and waved, and I smiled big and went back to my seat.

“Can you pronounce it again?” asked Rosemary T., so maybe she didn't hear it just right.

She spelled it right.
Alas.
And so did the next five people; and the round finished, and the audience finally got to clap.

I took the opportunity to give a little wave to my mom and dad, and my bracelets jingled.

No one got out in round two, and no one started to clap by accident, so I guess we were all getting used to being at a spelling bee. Round three got a little harder. Emma from the other third-grade class mixed up where the
i
and
a
go in
alleviate
; and Leslie, who's also in that class, got mixed up about the
r
and the
e
in
mediocre
.

For a minute I was a little stumped, but then I remembered about vegetarian dinosaurs eating plants and herbs. “
Herbicide. H-e-r-b-i-c-i-d-e. Herbicide
.”

“Can you pronounce it again, please?” asked Rosemary T.

“
Scissors
?” Mrs. Shu pronounced it again, but this time like a question.

“Can you define it, please?” asked Rosemary T.

Mrs. Shu gave Rosemary T. a funny look, and I knew why. Everyone in that whole auditorium knew what scissors were. “A two-bladed cutting instrument.” 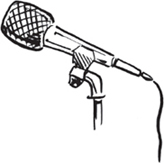 The fourth round had tons of hard
G
words. Isaac missed the word
ghoul
, and I got the word
guardian
and was sure I was going to miss it too. Then I remembered about lifeguards.
Phew!
Rosemary T. got
gymnasium
, and Mrs. Shu said it very slowly and told her she knew what it meant and that she should spell. And Rosemary T. did and got it right.

Round five was all full of words I had never even heard of like
appellate
and
bassoon
. I got
vernacular
; and thank goodness for figuring out where
vexylent
would live if it goes in the dictionary, because I got it right.

Rosemary T. stood there for a second and then she said, “Can you pronounce it again, please?”

“Can you define it, please?” asked Rosemary T.

“Can you use it in a sentence, please?” asked Rosemary T.

“Worried that someone might clap when they shouldn't, the principal decided to harangue the audience on spelling bee etiquette.”

I didn't know about Rosemary T., but all this help from Mrs. Shu would not have helped me at all. The only thing that might have would have been eating chocolate meringue pie with Charlie and Mrs. Hansen and talking about the weird word that we were eating.

“That is incorrect,” said Mrs. Shu. “Please join the audience.”

And when that round ended, I smiled the biggest ever and even clapped myself when it was time for applause. And maybe that wasn't too nice, but maybe it was okay. I've never had a not-friend before, so I'm not sure what exactly you do. 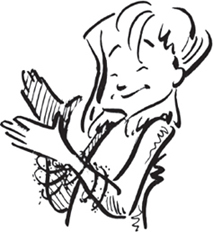 Zombies Eat Lawyers by Michael, Kevin, Maran, Lacy
The Naked Prince by Sally MacKenzie
For Sale Or Swap by Alyssa Brugman
The Chalet by Kojo Black
Truthseekers by Mike Handcock
The Reckoning by Thomas, Dan
The Price of Power (The Price of Secrets Series Book 2) by Ashley Drake
Morganville Vampires [01] Glass Houses by Rachel Caine
God's Pocket - Pete Dexter by Pete Dexter
Dead for the Money by Peg Herring