The Murder in Skoghall (Illustrated) (The Skoghall Mystery Series Book 1) 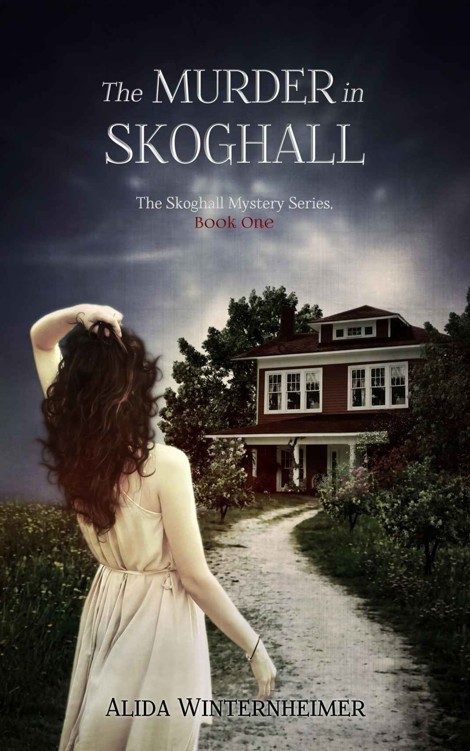 Published in the United States by 28.5press

Don’t be a pirate.

A man lurked outside under the birch trees. He shifted his weight from one foot to the other and ground a lead cowboy into the earth. Because he was wearing military combat boots, he did not notice the pressure under the ball of his foot, or if he did he assumed it was only a stone. From where he stood, he had a good view over the hood of the station wagon and porch railing, right into the living room, which was well lit. The dark and concealing sky made the window all the brighter and more inviting. He had watched the woman inside dancing her way merrily out of the room, and later come back carrying a mug and sucking on the knuckle of her other hand. He was entranced by her red curls.

Red like Bonnie, Bonnie whom he had lost. Bonnie who had made a going away present of herself and then married someone else—a college boy. He could have stayed home. He could have gone to college. He could have married Bonnie. Did she have any idea how much that letter had hurt him? How after he got the news, he had gone crazy for a while? He thought about shooting himself in the foot so that he could go home and win her back. But nothing happened fast in Nam. Nothing except death and dying. By the time he got home, she’d already be married and he’d have a rotten foot. He got drunk one night and put his M14 rifle to his mouth. He was bawling like a baby because he couldn’t do it. Even after everything he’d seen, he wanted to go home. Even after he learned that Bonnie wasn’t waiting any more. Since he couldn’t pull the trigger, he decided to go in first and come out last. He decided he’d be a hero or be dead. He decided heroes weren’t the bravest guys, they were guys who didn’t give a shit anymore. It was easy to be a hero. But he hadn’t counted on his luck. He kept thinking,
This is it
. He kept thinking,
I’m a goner
. And he kept coming out alive while his buddies were blown to pieces. He’d seen so much horror and gore that he knew he’d never be same. He felt the tipping point at the very edge of his humanity. On one side was sanity and a way home. On the other side was red and black. He couldn’t talk about it, not even over there with the other guys. Not even then. So he joked about the red and black. And then he lost it. He lost it so bad the way home was behind him now and everything was red and black. It got easy then, knowing he couldn’t go home. Knowing he’d already lost everything. He let himself act like a crazy fool. He no longer cared what he wrecked or what wrecked him. His buddies gave him the nickname Kamikaze. They warned him he was turning into one sick mother-fucker, but they were glad whenever he pulled someone out of the fire—it had its benefits, letting go. He went after a gook bitch who’d been moving weapons out of one of their tunnels, sneaking them to the enemy. She liked to tie her baby on her back and slip a Mauser pistol between her and the kid, so the gun was swaddled up with the little yellow bastard. That shit used to make him sick. Then he stepped into the red and black and it stopped mattering. He was on the side of John Wayne. She wasn’t.
Hey man, back off. We don’t do that shit to people.
Rodriguez didn’t know what he knew. Rodriguez still thought there was a way home.
Fuck off. She ain’t people. She’s a pack mule for Charlie.
She’s gonna tell me where the weapons are.
It was all red. And black. Charlie must have been watching her, must have decided she was expendable. There was a flash and a boom. Rodriguez went to pieces, while he caught on fire, ran from the hut, leaving the gook bitch to burn up with what was left of Rodriguez. He dove into a swampy puddle, rolled around while his shirt disintegrated and took his skin with it. He was glad he was dying.
Send my dog tags home. Let them think I’m a hero.
Then he woke up in Saigon. They told him he was lucky. His face had been spared and he would live. There were other guys without skin, their bodies leaking all over the place, sometimes for days before they finally had enough. He would live long enough to grow a new suit. He lay on his stomach in Saigon, his face in a hole in the table, his only view of the dirty floor, his back exposed to the air, the flies walking through the salve that kept his raw flesh moist and kept away infection. He got infections all the same and with them raging fevers and screaming hallucinations. One day a nurse with a soft voice wrapped him up. Her pant legs were rolled up to the tops of her freshly polished boots. She talked to him while she laid bandages over his flesh, told him he was going home.
Home. What about the red and black?
He carried enough red and black inside him now to destroy home. He was shipped stateside to convalesce in the stinking VA hospital. The flies were worse than in Saigon. The rats, too. But the Dilaudid kept him calm. He spent months on his stomach, his body turning to Jell-O while his skin did its thing. When he was finally allowed to move—in a wheelchair first because his legs were toothpicks now—the first thing he did is find a mirror. His back had been flayed. The new skin forming there was shiny, pink, and stretched taut, like his body was knitting this new suit, cell by cell, one size too small.

Where the fuck is my rifle?
He got down low and ran toward the light, using the porch as cover.

The Fancy by Dickens, Monica
Freddy the Politician by Walter R. Brooks
A Dream of Horses & Other Stories by Aashish Kaul
Fast Track by Cheryl Douglas
The Last Good Paradise by Tatjana Soli
The Bones Of Odin (Matt Drake 1) by Leadbeater, David
Jeeves and the Wedding Bells by Sebastian Faulks
Jihadi by Yusuf Toropov
Breakthrough by Michael Grumley
The Good Rat by Jimmy Breslin