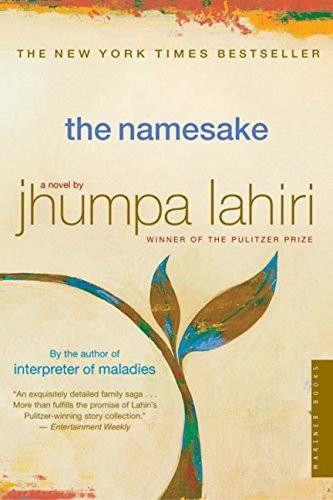 "Extraordinary ... an insightful and descriptive take on family,
tradition, and self-acceptance ... Jhumpa Lahiri is an accomplished
novelist of the first rank."
—San Diego Union-Tribune

"Memorable fiction ... Lahiri's gift is for shrewd insight into character done up in elegantly understated prose ... Astringent and clear-eyed in thought, vivid in its portraiture, attuned to American particulars and universal yearnings."
—Newsday

"Lahiri's writing is assured and patient, inspiring immediate confidence that we are in trustworthy hands. Lahiri beautifully conveys the émigré's disorientation, nostalgia, and yearning for tastes, smells, and customs left behind."

"Poignant ... A novel of exquisite and subtle tension, spanning two generations and continents and a plethora of emotional compromises in between ...
The Namesake
is a story of guilt and liberation; it speaks to the universal struggle to extricate ourselves from the past—from family and obligation and the curse of history."
—Boston Globe

"Quietly dazzling ...
The Namesake
is that rare thing: an intimate, closely observed family portrait that effortlessly and discreetly unfolds to disclose a capacious social vision . . . a debut novel that is as assured and eloquent as the work of a longtime master of the craft."
—New York Times

"Lahiri's graceful first novel more than ful.lls the promise of her Pulitzer-winning story collection ... The exquisitely detailed saga of the Ganguli family ... becomes the classic story of American immigration and assimilation."

"
The Namesake
... confirms what her first book suggested—that she's a writer of uncommon grace and sympathy."

"Lahiri handles issues of assimilation and belonging with her trademark mix of quiet observation and heartbreaking honesty ... the casual beauty of the writing keeps the pages turning."

"Written in an elegant hush—even upon rereading, there isn't a single burned raisin in the mix."

"This tale of aspiration and double identity is far more authentic and lavishly imagined than many other young writers' best work."
—Time Out New York

"Hugely appealing ... Gracefully written and filled with wellobserved details, Lahiri's novel—like her hero—manages to bridge two very different societies and to give us the absolute best of both."
—People

"Lahiri is an intuitive writer ... her gift is a power of sympathy."

"A full flowering of her talent ... beautifully rendered ... Lahiri displays the knowingness of the native with the newcomer's openness to every detail."
—New York

"
The Namesake
does such a remarkable job of depicting the importance of family and how people cope in unfamiliar terrain that it is one of the best works of fiction published this year."

"A book to savor, certainly one of the best of the year, and further proof that this immensely talented writer's prizewinning ways are far from over."
—Atlanta Journal-Constitution

"A poignant, beautifully crafted tale of culture shock ... Reading it, anyone will understand how it feels to be a cultural outsider."

"A fine novel from a superb writer."
—Washington Post

"Against all that is irrational and inevitable about life, Lahiri posits the timeless, borderless eloquence and permanence of great writing."
—Pittsburgh Post-Gazette

"Lahiri's style in this novel, as in her short fiction, is graceful and beautiful."
—San Antonio Express-News

"Readers will find here the same elegant, deceptively simple prose that garnered so much praise for her short stories ... The result is a seemingly quiet, almost undramatic novel whose characters and incidents continue to leap freshly to mind weeks after reading it."
—Book Page

BOOKS BY JHUMPA LAHIRI
Interpreter of Maladies
The Namesake

A portion of this book appeared in slightly different form
in
The New Yorker.

I am indebted to the following books:
Nikolai Gogol,
by Vladimir
Nabokov, and
Divided Soul: The Life of Gogol,
by Henri Troyat.
Quotations from "The Overcoat" are from David Magarshack's
translation.

For Alberto and Octavio, whom I call by other names

The reader should realize himself that it could not have happened otherwise, and that to give him any other name was quite out of the question.

On a sticky august evening two weeks before her due date, Ashima Ganguli stands in the kitchen of a Central Square apartment, combining Rice Krispies and Planters peanuts and chopped red onion in a bowl. She adds salt, lemon juice, thin slices of green chili pepper, wishing there were mustard oil to pour into the mix. Ashima has been consuming this concoction throughout her pregnancy, a humble approximation of the snack sold for pennies on Calcutta sidewalks and on railway platforms throughout India, spilling from newspaper cones. Even now that there is barely space inside her, it is the one thing she craves. Tasting from a cupped palm, she frowns; as usual, there's something missing. She stares blankly at the pegboard behind the countertop where her cooking utensils hang, all slightly coated with grease. She wipes sweat from her face with the free end of her sari. Her swollen feet ache against speckled gray linoleum. Her pelvis aches from the baby's weight. She opens a cupboard, the shelves lined with a grimy yellow-and-white-checkered paper she's been meaning to replace, and reaches for another onion, frowning again as she pulls at its crisp magenta skin. A curious warmth floods her abdomen, followed by a tightening so severe she doubles over, gasping without sound, dropping the onion with a thud on the floor.

The sensation passes, only to be followed by a more enduring spasm of discomfort. In the bathroom she discovers, on her underpants, a solid streak of brownish blood. She calls out to her husband, Ashoke, a doctoral candidate in electrical engineering at MIT, who is studying in the bedroom. He leans over a card table; the edge of their bed, two twin mattresses pushed together under a red and purple batik spread, serves as his chair. When she calls out to Ashoke, she doesn't say his name. Ashima never thinks of her husband's name when she thinks of her husband, even though she knows perfectly well what it is. She has adopted his surname but refuses, for propriety's sake, to utter his first. It's not the type of thing Bengali wives do. Like a kiss or caress in a Hindi movie, a husband's name is something intimate and therefore unspoken, cleverly patched over. And so, instead of saying Ashoke's name, she utters the interrogative that has come to replace it, which translates roughly as "Are you listening to me?"

At dawn a taxi is called to ferry them through deserted Cambridge streets, up Massachusetts Avenue and past Harvard Yard, to Mount Auburn Hospital. Ashima registers, answering questions about the frequency and duration of the contractions, as Ashoke fills out the forms. She is seated in a wheelchair and pushed through the shining, brightly lit corridors, whisked into an elevator more spacious than her kitchen. On the maternity floor she is assigned to a bed by a window, in a room at the end of the hall. She is asked to remove her Murshidabad silk sari in favor of a flowered cotton gown that, to her mild embarrassment, only reaches her knees. A nurse offers to fold up the sari but, exasperated by the six slippery yards, ends up stuffing the material into Ashima's slate blue suitcase. Her obstetrician, Dr. Ashley, gauntly handsome in a Lord Mountbatten sort of way, with fine sand-colored hair swept back from his temples, arrives to examine her progress. The baby's head is in the proper position, has already begun its descent. She is told that she is still in early labor, three centimeters dilated, beginning to efface. "What does it mean, dilated?" she asks, and Dr. Ashley holds up two fingers side by side, then draws them apart, explaining the unimaginable thing her body must do in order for the baby to pass. The process will take some time, Dr. Ashley tells her; given that this is her first pregnancy, labor can take twenty-four hours, sometimes more. She searches for Ashoke's face, but he has stepped behind the curtain the doctor has drawn. "I'll be back," Ashoke says to her in Bengali, and then a nurse adds: "Don't you worry, Mr. Ganguli. She's got a long ways to go. We can take over from here."

Now she is alone, cut off by curtains from the three other women in the room. One woman's name, she gathers from bits of conversation, is Beverly. Another is Lois. Carol lies to her left. "Goddamnit, goddamn you, this is hell," she hears one of them say. And then a man's voice: "I love you, sweetheart." Words Ashima has neither heard nor expects to hear from her own husband; this is not how they are. It is the first time in her life she has slept alone, surrounded by strangers; all her life she has slept either in a room with her parents, or with Ashoke at her side. She wishes the curtains were open, so that she could talk to the American women. Perhaps one of them has given birth before, can tell her what to expect. But she has gathered that Americans, in spite of their public declarations of affection, in spite of their miniskirts and bikinis, in spite of their hand-holding on the street and lying on top of each other on the Cambridge Common, prefer their privacy. She spreads her fingers over the taut, enormous drum her middle has become, wondering where the baby's feet and hands are at this moment. The child is no longer restless; for the past few days, apart from the occasional flutter, she has not felt it punch or kick or press against her ribs. She wonders if she is the only Indian person in the hospital, but a gentle twitch from the baby reminds her that she is, technically speaking, not alone. Ashima thinks it's strange that her child will be born in a place most people enter either to suffer or to die. There is nothing to comfort her in the off-white tiles of the floor, the off-white panels of the ceiling, the white sheets tucked tightly into the bed. In India, she thinks to herself, women go home to their parents to give birth, away from husbands and in-laws and household cares, retreating briefly to childhood when the baby arrives.