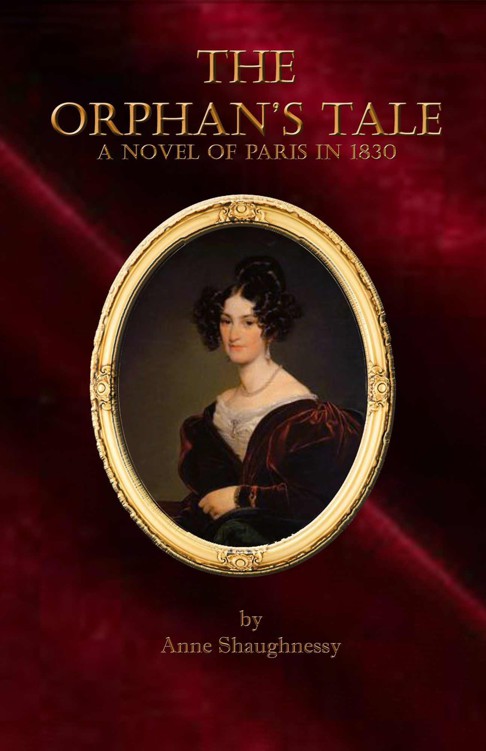 This book is a fantasy without magic - or at least without the sort of magic you encounter in Paris.  My efforts to research the operations and procedures of the French Police of that era were extensive and monumentally unsuccessful.  Even the books, written in French and ordered from France shed no light on anything prior to 1985.

In the same way, thanks to Napoleon III and Baron Haussman, the streets of Paris as they were in 1832 are undiscoverable to me, unless I wish to travel to Paris and haunt the antique documents stalls at the Marche' aux Puces.

The procedures and layout of this Paris come from my own imagination.  I hope they entertain; they are not intended to instruct.

Lights were dancing on the river Seine below the old Pont Neuf. It was early autumn; the evening wind brought the scent of wood smoke, touched with a tang of mossy stones from the river itself. The air quivered with the last deep notes of the carillon of Notre Dame de Paris. The sky was deepening to black; to the east, the constellation of Pegasus seemed to gallop above the spire of the cathedral, scarcely brighter than the earthbound constellation below it that was Paris, the city of lights.

A
knot of armed Police officers was gathered just at the opening of the Place Dauphine, at the northwestern end of the Île de la Cité. They were speaking quietly and gazing from time to time at a tall, broad-shouldered man in a caped black coat, standing some ways apart from them and gazing up at the stars.

As
they stood there, another man came hurrying up and saluted. "Time!" he panted.

"
Best tell him, then," said the lead constable, nodding toward the man. "Want me to do it for you?"

The messenger drew himself up proudly.
"I am from Chief Inspector Malet's own arrondissement," he said. "I will tell him, myself!"

"
What are you to tell me, Severin?" the tall man said without turning. His voice was deep and quiet, overlaid with the hint of an accent.

The man turned at that, and directed a keen gaze at the man.
"Ah?" he said. "Already?"

"
And have the assassins been sighted as well?"

"
I saw them myself as they emerged from the sewer. Inspector L'Eveque reports that some were hiding along the quai de la Megisserie, as well."

"
Very good," said Chief Inspector Malet. "You have done your part well." When he saw that the messenger was hovering he said, "What is it?"

"
May I be in on the kill, M. l'Inspecteur?" Severin asked breathlessly.

"
If you'd like," said the man. He cast one last glance up at the stars and then said, "Places, gentlemen-and remember your parts."

He watched them scatter and then positioned himself at the corner of the row of tall, old houses lining the Place Dauphine and trained his narrow gaze on the Pont Neuf.

The oldest and loveliest bridge in Paris was also, for the moment, the most ill-omened, due to the number of throat-slit, weighted bodies dredged from the silt close to it in the past several months. Their number and the uniform manner of their deaths had piqued Paul Malet, the ranking Police Inspector in Paris, and he had approached the Prefect of Police with the suggestion that he be allowed to spearhead a task force that would do something about it. This evening was the culmination of two months' intensive planning on Malet's part with the cooperation of the other Chief Inspectors of the various Parisian arrondissements, or districts.

Malet's eyes narrowed as he caught the snatch of a whistled tune.
He frowned into the night and after a moment he saw the decoy approaching the northern end of the bridge.

He was a well
-set-up young fellow, beautifully dressed, twirling a gold-headed cane with jaunty aplomb. A diamond glinted in the folds of his cravat, and the crimson silk lining his cloak caught the lamplight in brief, ruddy flashes. His step was uneven at the moment, as though he had had several glasses of wine more than necessary.

This fellow, a nameless volunteer, had been treated to a programme enjoyed by the victims over the past months, according to Malet's painstaking reconstruction: a splendid performance at the Opera-Rosalie Plessis herself was singing that night-followed by a fine supper at one of the most expensive restaurants in
Paris.

The young man had been dressed in the first stare of fashion, decked with the expensive jewelry appropriate for a fashionable gentleman, and instructed to flaunt all his supposed wealth, as all the other victims had done.
It was an enviable evening in all respects but one. Unfortunately, the programme finished with the subject walking all alone down one of the most lonely stretches of street in Paris.

The jaunty, whistled tune faltered and then grew suddenly louder.

Malet, standing in the shadows, smiled knowingly to himself. The lad was bluffing, and doing a good job of it. It said a great deal for the fellow that he had volunteered for such a hazardous duty. It remained for Malet to see that he survived this night's work.

The decoy's foot was upon the bridge now.
He lifted his head and twirled his gold-tipped cane, whistling all the louder, a song popular in the cafes at the moment, mindless words but a lively tune.

Malet leaned forward as several shapes seemed to appear from the river.
Hmm. They had been hiding in a culvert, then, as he had suspected. Now they moved softly toward the decoy.

The young man heard the footsteps behind him.
The whistled tune faltered a little.

They were getting too close.
It was time. Malet raised his hand and lowered it; silent shapes shifted among the trees of the Place Dauphine and edged along the quay. Malet drew a deep, silent breath, and stepped forward, himself.

The river was chuckling against the bridge supports.
The silent, furtive men moved closer; the decoy strolled to the side of the bridge and stood looking down at the reflections of the stars in the rippling water.

The shapes converged on the decoy.

Malet, watching in the shadows, caught the flash of steel and stiffened. The decoy had been provided with a small but expensive sidearm for his protection, but it was questionable whether he would have an opportunity to use it.

"
Good evening, M'sieur," said a voice. It was strangely congested, as though it were being squeezed through a large wool muffler.

The decoy tried to turn.

"Ah, no, M'sieur," said the voice. "Just look at the pretty water and the pretty stars and hand over that pretty cane."

The decoy did so.
"Please," he said, his voice shaking. "I-I have some money-"

"
Ah?" It was a different voice this time. "Then give it to us, and quickly."

The decoy started to reach into his waistcoat.

"With two fingers only, M'sieur," the voice said, "And very, very slowly."

Malet nodded to the others beside him.
"Go after them.  He is in too much danger now."

The decoy whipped around just as someone shouted,
"Kill him! He's a cop!"

Malet cursed as he heard the sound of knives being drawn.
"Now!" he shouted without troubling to lower his voice.

A
t the same moment the decoy cried, "I arrest you all in the name of-"

The little pistol that was supposed to slide smoothly down the man's sleeve and into his hand plummeted past his groping fingers as he spoke, and crashed to the pavement, to go off with a roar and a spurt of flame.

The night was suddenly alive with pounding feet, shouting voices and cloaked figures hurrying forward from the shadowed side streets that rayed out from the Place du Chatelet and opened on to the Quai de la Megisserie.

A cudgel blow to the head sent the decoy flying as his attackers closed with the Police. Gendarmes with swords drawn, police constables with clubs and guns joined battle with the crowd of attackers.

Malet watched for a few seconds and then made his unhurried way through the confusion of the melee, spinning one thief into the arms of a uniformed constable, rapping another on the skull with the head of his walking stick, and pulling a third back by the scruff of his neck.

This one looked up, gasped, and shouted, "Run for it! It's Malet!"

Malet's teeth showed in a smile.
"You're a little late, Picou," he said with ominous cordiality as he thrust the fellow into the arms of two constables and moved into the thickest of the fighting.

Someone jammed a pistol up against his ribs; Malet seized the hand and wrist holding the pistol and wrenched them up and back as the firearm went off with a roar.
The sound of the shot froze all motion for a second. The gunman was sprawled on the ground with a fractured jaw the next moment.

Malet sent the weapon sailing over the balustrade of the bridge and into the river with a negligent flick of his hand and then turned back toward the throng.
"Anyone else care to try?"

A squad of constables started after them.

"
Let them go," said Malet. "They're in for a surprise in a few minutes." He looked around, located the decoy, and went to him.

The young man had struggled to his hands and knees and was nursing a bleeding forehead.

Malet leaned down, gripped him by the elbow and hauled him to his feet. His hand lingered for a moment until the man was steady.

The decoy gazed up unrecognizingly at him.
A nearby street lamp illuminated a well-bred, handsome face that warmed as Malet smiled at him and tallied the man's injuries.

"
Did we get them all?" the decoy asked breathlessly as he wiped the blood from his forehead.

"
We got them," said Chief Inspector Guerin of the 18th arrondissement. He was standing behind Malet and eyeing the decoy with profound disfavor. "One of them a little more permanently than we had wanted." He motioned behind him. A group of men, handcuffed and bedraggled, were standing a little apart in the custody of eight heavily armed constables. A crumpled form lay beyond them. "You're bleeding on M. Martel's clothing, Saint-Légère."