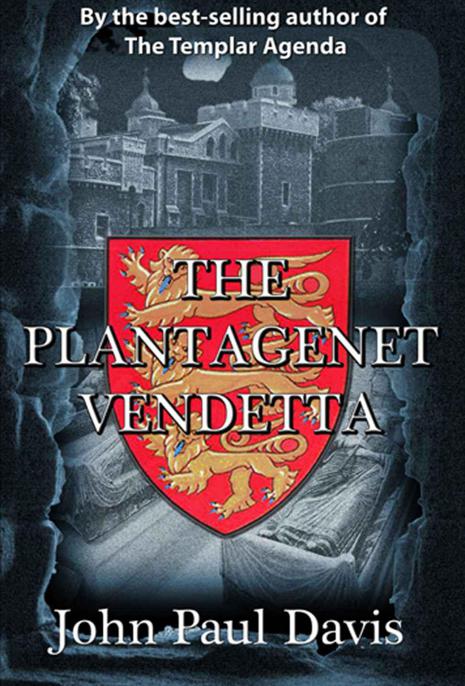 The right of John Paul Davis to be identified as the author of this work has been asserted in accordance with sections 77 and 78 of the Copyright Designs and Patents Act 1988.

The following tale is a work of fiction. All names, people, locations and events are either the product of the author’s imagination or else used fictitiously. Any similarity to people, living or deceased, events, organisations or locales not otherwise acknowledged is coincidence.

This book or eBook is sold subject to the condition that it shall not, by way of trade or otherwise, be resold, lent, hired out or otherwise circulated without the author’s prior consent in any form of binding or cover other than that in which it is published and without a similar condition, including this condition, being imposed on the subsequent purchaser.
Praise for
The Templar Agenda

Can’t wait for the new one…

Richard Doetsch, international bestselling author of
The Thieves of Heaven

Steven Sora, author of
The Lost Colony of the Templars

A well-researched, original and fascinating work – a real page-turner

Bloody will be thy end

“The king is dead; long live the king.”

So went the cries in the streets.

Even six months later, the prince remembered it well. Despite his father’s death, it had seemed a more positive time back then. Though England remained at war, there were signs that thirty years of conflict was nearing a conclusion. A golden age lay ahead. In future they would refer to the chaos as the Wars of the Roses.

To him, it would forever be known as the cousins’ war.

As memories of his father dissipated, thoughts returned to the present. The young boy looked up at the duke, his eyes wide open and his body quivering. Although the man in front of him was small in stature, his reputation was legendary. Even before the young boy’s incarceration in the Tower, he had heard rumours of the duke’s potential. According to hearsay, he coveted power above all things and had already murdered one monarch.

But the boy did not believe such rumours. There was kindness in the duke’s eyes.

The young boy looked to his left and saw movement. A rowing boat had appeared by the water gate, barely visible beneath the light of two fiery torches. The boat was small, occupied by two adults, one of whom he recognised. He saw his mother smile at him through a mask of tears as the burly man alongside her helped his brother and cousin aboard. Fever had gripped his brother’s fragile twelve-year-old body, already ravaged by tuberculosis.

It was the curse of his family.

The prince didn’t need to consult a physician to know that his brother was dying.

He returned his gaze to the duke. “What happens now?”

“That is not your concern anymore,” the duke replied, tears in his eyes. “For you, there will be no more war.”

The young boy struggled to keep himself together. Seeing his brother that way made him want to die himself. For several months he had been his constant companion, his only playmate in the confines of the Tower. It had become his home – his one guarantee of safety from his enemies.

The duke moved closer. “I need you to be brave, for both of us. Someday you shall return. And should anything happen to my own son, it will be you, and one day your descendents, who shall rule England.”

The boy remained silent. On hearing the words he felt his resolve strengthen, as if the life force that had once guided his father had now entered him.

His concentration was now unbreakable.

Close to the water gate, the small boat was ready to cast off, its oars vibrating against the rowlocks as they bounced against the waves.

The duke placed his hand to the boy’s face and kissed him on the forehead.

Seconds later, the boy got into the boat and silently sailed away.

The sniper watched through the telescopic sight as the white Mercedes accelerated up the hill.

The Merc had been on the road for almost an hour. It had started the day at the usual place, a lavish but discreet villa twenty miles north of Nonza with fine views west across the Med. He knew from the records that the property belonged to the family, and had done for over a decade.

The car had stayed there till 5pm. An hour later he followed it to the car park of a luxury resort about thirty-five miles away. The casino was one of their favourite hotspots; he guessed more so for the wife than the husband. Either way, he didn’t seem to object.

Even if he lost, he had plenty more where that came from.

The driver of the Mercedes changed gear as he increased speed. He savoured the moment as the 450-BHP provided the familiar rush. The roar was as good as the feeling. To him it was almost sexual; to his wife, even more so.

He looked over at her and smiled, taking delight in every aspect of her appearance. The blonde hair, the white complexion slightly bronzed from eleven days on the island, the fine jewellery…

She was as beautiful as she had always been.

He accepted the cigarette that she delicately placed between his lips and leaned forward for the light. She lit his before her own and exhaled gracefully, the smoke leaving the car through the open sunroof.

As he removed the cigarette from his mouth to take a breath of fresh air, he became aware of the passing mountainside. It was slowly getting dark. The white rock reflected the fading sun, creating a unique yellowy-orange colour as the light hit it. The road was lonely, a famous part of the mountain pass used for the local rally circuit. Its use by others was not uncommon.

But tonight they had it all to themselves.

The sniper watched as the Merc slowed its pace to negotiate the series of minor turns before accelerating again as the road straightened.

The D80 was arguably the best road on the northwest side of the island, both the least populated and most unspoiled.

A driver’s paradise, some had dubbed it.

The scenery was stunning. In the daytime, rugged mountains, nestled in between mile upon mile of natural woodland, were visible in every direction, masking the countryside in an intense green shade. At dusk, the landscape took on a different type of beauty. Though the sun was yet to set completely, the moon was out in full, its hazy gaze affected only by the relative earliness of the hour. As the mountains began to merge with the skyline, small lights sparkled in the distance, lighting up the countryside like small fireflies. As the ocean disappeared, the sounds became louder. In between the squawks of the nocturnal bird life, the soft swaying of the sea against the jagged coastline offered a calm, soothing effect.

The sniper followed the car through the crosshairs of the telescopic lens. Even from a distance, it wasn’t the hardest of jobs. The high-powered lens included infrared, perfect for surveillance of this sort.

Even though he had left the forces, working for his present employers, he wasn’t deprived of the best technology.

He had set up his base on a corner of D433, some five hundred metres above D80. The position held great strategic importance. Aside from its loneliness, he knew from experience that a large hairpin preceded the next stretch, forcing the driver to slow down. It was also here where D80 came nearest to the sea.

Exposed to the elements.

The driver of the Merc looked up to his right, suddenly confused. He saw light, not electronic, but something smaller. Instinct told him it was a reflection, light on glass.

His wife picked up on his change in mood. “Richard, what is it?”

The fair-haired husband didn’t respond. He had no proof that anything was wrong, but his intuition was bothering him.

The events of three weeks earlier were still fresh in his memory.

His wife was becoming concerned. “Richard?”

The sniper detected a change of pace from the Merc, surprising given that a turn was imminent. The driver braked late as he took the bend, much too fast. The area to his right was forested, whereas the landscape to his left was more open. A large railing flanked the road, the only obstacle between the road and oblivion.

The sniper steadied the long-distance rifle and followed the Merc in the crosshairs. No sooner had the driver taken the bend than he picked up further speed.

The driver felt a bump on the right side of the car, then another. He heard a noise, a dull clattering sound. He saw sparks lighting up the car momentarily before disappearing as soon as they had arrived. He looked in the rear-view mirror and saw nothing.

Whatever had happened had come from above.

He floored the accelerator, despite another upcoming bend. As he did, he felt a further thump, this time on the bonnet.

Then he heard glass breaking.

The sniper cursed under his breath. His inaccuracy had forced him to reload, losing him valuable seconds. He quickly loaded four new bullets into his rifle and sought to compose himself.

He took a breath, in then out. He aimed just forward of the front right tyre, his mind doing the maths to allow for speed. He estimated 110mph, far too much for the road.

He squeezed the trigger.

Five hundred metres below, the Merc started to zigzag. There was movement beneath the car, outside the driver’s control. A tyre had gone, perhaps two. As the car veered left, it became locked on a course for the cliff edge.

Going over was unavoidable.

Sworn To Raise: Courtlight #1 by Edun, Terah
The Seventh Day by Joy Dettman
Cursed by Ella Price
Bicycle Mystery by Gertrude Warner
Improper Proposals by Juliana Ross
Law of Survival by Kristine Smith
The Lost and the Damned by Dennis Liggio
03_The Unexpected Gift by Irene Hannon
Treat Me Like Somebody by Simms, Nikki
When Nights Were Cold by Susanna Jones