Read The Potty Mouth at the Table Online

The Potty Mouth at the Table 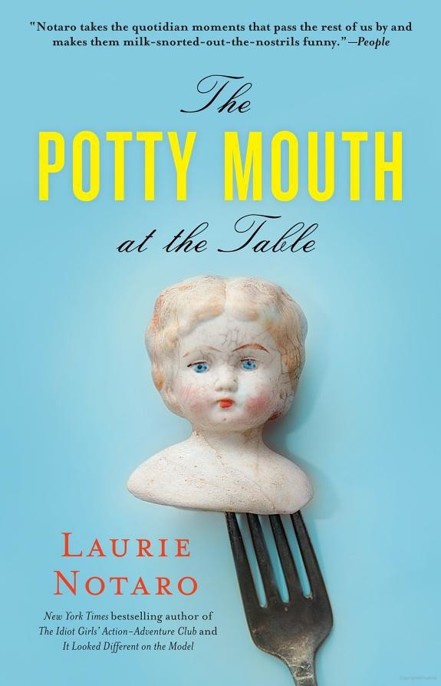 The Potty Mouth at the Table

Don’t Make Me the Asshole

Legends of the Fall

Live from the Bellagio

Am I a Book Snob?

I’m Gonna Get You

Sins of the Pin

I Only Want to Know If You Have Herpes

A Handy Manual for a Widower, My Husband

If I Only Had a Brain

Who Said It Was Donut Time?

You Are Not Invited

To the bravest of them all,

T
urn that off!
” I yelled to my husband from my office as soon as I heard the old-timey music broadcast from the television. My husband knew better, and I mumbled that as I heard him scramble for the remote control and then abruptly change the channel.

“I hate them!” I called out for emphasis. “Go to hell,
Antiques Roadshow
! Go to hell!”

My husband then flipped to what sounded like a woman screaming as she was being covered with tarantulas. “Do you prefer this?” he asked, turning up the volume.

“Yes,” I replied adamantly. “I don’t ever want to hear that stupid-ass flute played in this house again.”

“I think it’s a clarinet,” he corrected me. “It’s definitely from the woodwind family.”

“I don’t care what it is!” I screeched. “I would rather be standing in the hall in my underwear and hear your mom’s voice right behind me than hear that song again! Hustlers! Grifters! Swindlers! Mountebanks!”

In the next second, my husband’s head popped into the doorway of my office.

“Do you really hate them so much that you went to thesaurus.com to come up with new words to toss out in your
Antiques Roadshow
rages?” he asked candidly.

“What would you call them if they did that to you?” I demanded. “Malefactors!”

“You’re pronouncing that wrong,” he informed me, then disappeared back into the living room.

“I am archenemies with them!” I shouted after him. “It’s part of our nemesis-ial relationship!”

I
didn’t always hate
Antiques Roadshow.
I used to like it. In fact, when it was announced that the show was coming to Eugene, I could hardly contain my excitement. I had waited for this opportunity for years,
years,
and I felt a little thrill in my chest every single time I thought about it. Because I had something
good.
Really good. So good that I knew: I would get not only on the show with a treasure like this, but on previews as well. So good that it might just make
Antiques
Roadshow
history and end up in a museum with its own security guard.

Yes, it was that good.

Let me first say that I am cheap. It’s true. If I can’t buy something wholesale or at least at a significant discount, I will track down that deal like it’s the last piece of cake at a Weight Watchers meeting. I’ve spent inordinate amounts of time doing this. My bargain-hunting record? Three years of searching eBay until I got the Marc Jacobs lace-up suede boots for twenty-three percent of what they cost retail.
In my size.
That was until 2009, when my ten-year search for W. S. George antique coffee mugs was completed when I paid twelve dollars for a dozen of new old stock.

In that same lucky antiques store where I found the mugs, I spied a big art nouveau poster propped up in the corner and half-hidden by shadows. It was a beaut. Six feet tall, printed on copper foil, and mounted on a giant sheet of plywood—a poster for
Lorenzaccio,
a play starring Sarah Bernhardt, that was signed “Mucha.” Immediately, I hooked both of my chubby arms around it and dragged it to the front counter, knocking over a dress form and nearly shattering a mirror.

The shop owner informed me that Mucha was an important artist, the father of Art Nouveau, and that this poster came from a turn-of-the-century theater in central California
that had been torn down half a century ago. The poster, one of several, had hung in the lobby behind glass, according to the person who had kept them in storage until the antiques dealer happened upon this one and brought it to her store.

And now it had my fingerprints all over it, slightly damp ones (there was mayonnaise on my sandwich at lunch). I knew that if I played my cards right, and this poster was original, it could make up for the fact that I had contributed more to my shoe collection than to my 401(k) account, the consequence of hastily scribbled odds of my rate of butter consumption vs. reaching retirement age. And for the record, I paid less for the poster than for my car payment.

I got the poster home and propped it up in my living room, and over the next couple of months, I went to work and did some research, e-mailed numerous galleries and art appraisers for any hints on whom I should contact or talk to next about my Mucha. I explained what I knew about its origins, included photos, and then I waited. And waited. And waited. I’m still waiting. I took that as a sign that something of this caliber was so rare that it automatically threw a shadow of doubt on its own pedigree, and that something like it simply had never been seen before.

Every year or two since I brought the piece home, I did
additional research on my Mucha, e-mailed a new art gallery or poster dealer, but the result was always the same: nothing. I even e-mailed
History Detectives,
one of my favorite shows, which investigates the history and authenticity of certain objects, and to my surprise, a producer called me back. I was elated and couldn’t wait for the investigation to begin but was subsequently informed that the research team ran into a dead end. After speaking to the antiques dealer I bought the piece from, they couldn’t find any further information about the origins of the piece, either. I was disappointed to hear the news and flopped on the couch to sulk.

“Maybe this is a sign that the poster should remain a mystery,” my husband suggested. “Maybe if you did find out anything about it, you could be opening a can of worms. Before you know it, Prague could be on our answering machine claiming that they want their poster back and that the mustardy fingerprints under your mayonnaise ones belonged to the Nazis. Especially if the show assigned you to Elyse Luray; it would be better to get Gwen Wright. She could keep a secret, I think.”

“I love Gwen,” I interjected with a smile. “But yes, Elyse would be on the phone to Prague in a second.”

Don’t get me wrong, I never want to benefit from Nazi plunder, but if I didn’t know that my poster had been stolen by greedy fascists, then it couldn’t be my fault if it was still
hanging on my wall, where I got to gaze at it every day and love democracy.

So I let it go. I stopped searching and accepted the poster for what it was: an unknown . . . until years later. I was reading the newspaper one day and saw that
Antiques Roadshow
was coming to my town. Suddenly, I felt a flutter in my chest, almost certain that it was a butter-clogged artery.
And a sign.

But deciding to go to
Antiques Roadshow
and actually being able to go are two completely different things, like the difference between what’s on Mickey Rourke’s face and the skin on the rest of humanity. Apparently, many, many people believe they have historical treasures of utmost significance hanging above their plaid La-Z-Boys in their rec rooms or growing rust in their gardens, so many that you don’t just “get” tickets to the show.

Instead, you get a lottery number. I was initially fine with that. I mean, really, I don’t live in a very big town, so I felt my chances were good to excellent. So I submitted my name and address on the
Antiques Roadshow
website.

Of course I was going to get tickets.

I was going to get tickets.

And when I told my friend Ariane about it, she replied with delight that she had something she’d like to have
appraised, too, and that we should make a pact: if I got tickets, I would take her, and if she got tickets, she would take me. We both doubled our chances in a second and I already had the tape measure out to figure how to get the poster in my car.

And then we waited for the date that they would send us our “Congratulations, Laurie, Your Mucha Poster, the Greatest Find in
Antiques Roadshow
History, Is About to Be Authenticated!” e-mail.

“Did you hear anything?” I’d call Ariane and ask.

And just to make sure, I checked every week to see that I had the date right and how much closer we were getting. I couldn’t stand it. I thought about buying a new dress to wear, because certainly this would be highlighted not only on the show itself but also in commercials and trailers and most likely on the website, too. I practiced my expression of utter joy and couldn’t decide whether I should cry softly or be graciously stunned by the wonderment of it all. Both looks were good, so I decided that I’d go with whatever felt more genuine in the moment.

Oh, I thought, I hope I get a twin! I don’t care which one. They’re both equally creepy. Even though they look the same, I have a feeling they each might elicit a different prepared reaction from me.

I looked at the Mucha, knowing that soon it was going to be legitimized, verified, respected for what it was. It was essential that its pedigree was finally recognized, especially after escaping the wrecking ball and being kept in storage for half a century.

The day that the ticket winners were notified, I woke up early and checked my e-mail.

I went to the
Antiques Roadshow
website and put in my confirmation number. The screen came up blank. I had not been chosen.

Death Along the Spirit Road by Wendelboe, C. M.
Unpretty: An Unloved Ones Prequel by Kevin Richey
The Innocent Witness by Terri Reed
Beyond Death (Perimeter Defense Book #2) by Michael Atamanov
Genesis of Evil by Nile J. Limbaugh
Love's Pursuit by Siri Mitchell
Children Who Kill: Profiles of Pre-Teen and Teenage Killers by Carol Anne Davis
Murder on the Candlelight Tour by Hunter, Ellen Elizabeth
Wanderlost by Jen Malone
The House by Danielle Steel