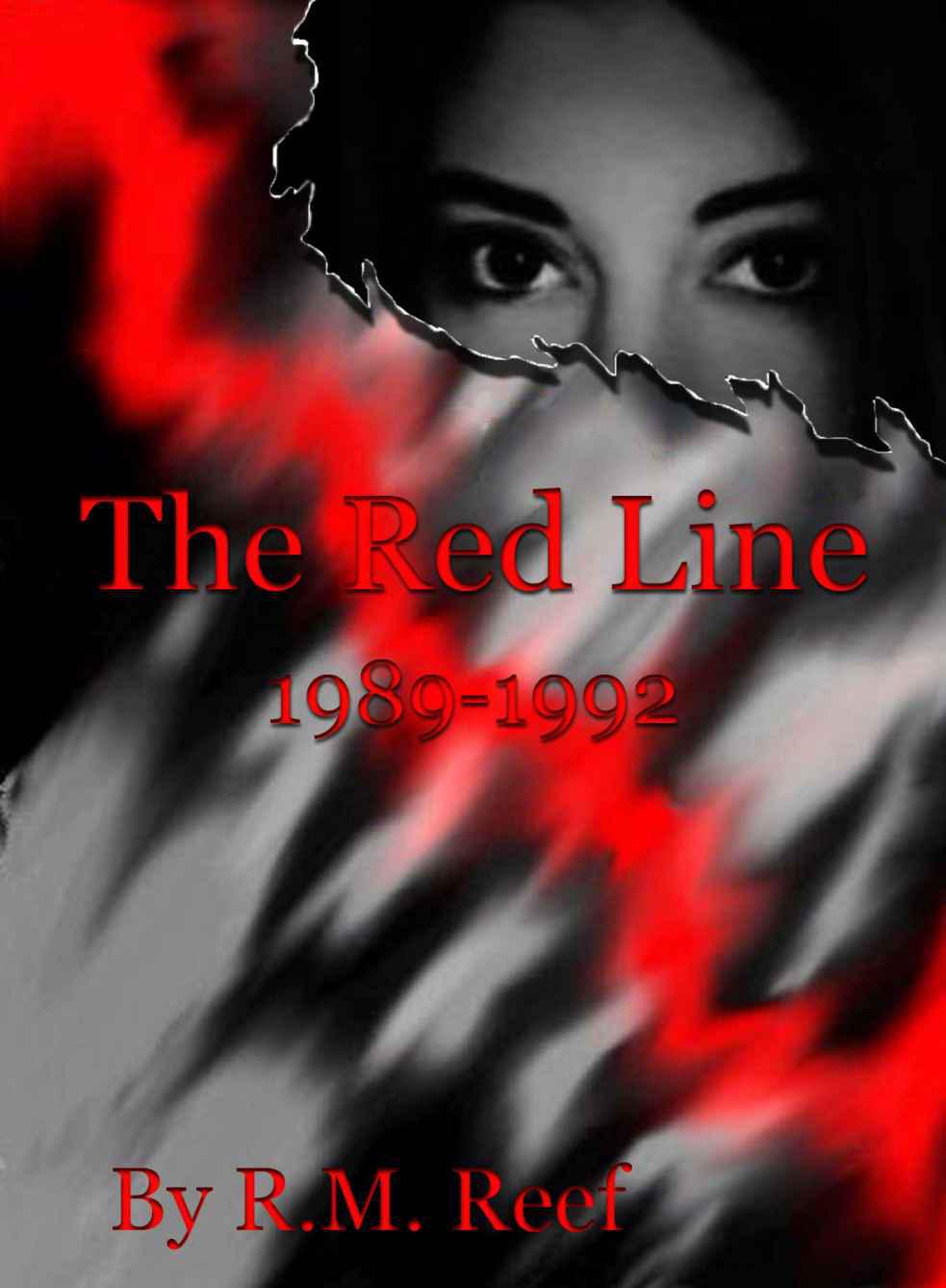 For sixteen years the red line sliced through the heart of Nora's city. The young doctor had grown up knowing that the virtual line cut Beirut into a Christian east side and a Muslim west side. She took it for granted that no one on either side in this civil war could cross the red line, the boundary of tradition, morality, and even identity. Then the Muslim patient appeared in the psychiatric ward who would convince her to do the unthinkable. Nora's passion for this man would draw her into enemy territory where she would have to weave words around her friends, relatives, and even a powerful and dangerous family, but one misstep and she would be caught in her own web. Nora is the grown-up child of war, and her story—which is based on a real one—is the story of Beirut itself, a city divided, a city driven to self-destruction in a frenzy of passion, a city that got addicted to the bitter taste war left on its tongue.

In Beirut, the capital, the light never dimmed. The sun, which shone during most of the year, was replaced at night by the brightly-colored glow of the cabarets, restaurants, and nightclubs that crowded the city. Even the sea all along the shoreline was illuminated, reflecting the heartbeat of a life that refused to rest, that refused to grow old...

After living together through many ordeals, Christians and Muslims, by common decision, defined this country by establishing rules respecting each other’s cultures and traditions. There were no civil laws when it came to personal issues; each party had to rely on its own religious beliefs and codes of conduct. Every marriage was supposed to be handled by a sheik or a priest.

As much as the Christians were open to the West
, the Muslims held onto
their traditions, which led to a society filled with contradictions. Jealousy, frustration, and outrage were common feelings between the two religions and between the social classes. Still, nothing showed on the surface until the war changed everything.

The influx of refugees widened the rift between the groups. Politicians started haranguing their people to fight. The religious leaders played an important role too.

The whole country blew up in a
second. Beirut, the party city, turned into a war zone. It was divided in two, one part for the Muslims and one for the Christians. In between were the front lines, an area of destroyed buildings, overgrown trees and bushes, and military barrages. This was a place where the ground was strewn with mines.

In the middle of this zone ran a virtual line that neither of the parties had a right to cross; it was called the Red Line...During the sixteen years of war in which the once illuminated land fell into shadow, the only light on either side of the Red Line came from a bomb bursting or a building on fire. “The Red Line” was a common
expression during these years. Everything was defined
by it:
traditions, religious conduct…you cross the Red Line and you’re on your own—you’ve thrown yourself to
the wolves!

She started running crazily in the dark, afraid of her own shadow. Someone might shoot at her, either the enemy or one of her own by mistake. She ended up on a familiar street; she knew exactly where she was. She leaned against the wall with a sigh of relief. Was he worth the risk? ‘Yes! Yes! Yes!’ Her heart screamed. After picking up her car from a hidden corner of the street, she had to pass through two military checkpoints on her way home. The hospital card identifying her as a doctor was her lifesaver.

“Nora? I wasn’t expecting you tonigh
t. You aren’t sleeping at the
hospital?” As usual, her mom was sitting in the same old ch
air across from the T.V. as she
watched the news.

The house was dark, and the refrigerator was almost empty. It had been the same since
her father was killed by
a mortar
two years ago. He had died like
many others—for no reason. He wasn’t fighting; he was just a casualty of war. Her mom wasn’t left with much. Most of their rental properties had been destroyed or were now occupied by refugees. Nora couldn’t wait to finish her last year of medical studies, to start her residency, and to earn some more money.

“I just came to check on you. I’ll be back tomorrow for at least three days straight.” She hated to lie to her mom, but was forced to do it. She couldn’t tell her about what she was
going through now in her life.
Tomorrow she would try to cross the line again, a real battlefield area separating Christians on one side from Muslims on the other. The militia there had started to call him and her
"lovers of the front-lines."
Who would have imagined that she would end up like this, deeply involved with the forbidden, deeply in love with the enemy!

“Are you ready to leave?” Asked Nora’s best friend, Rheem. “I can’t wait just to get to the room, throw myself on the bed, and fall asleep. Are you on call tonight?”

“Yes, and I still have two patients to see before calling it quits for the day. I’m hoping no one will wake me up tonight.” Rheem left, and Nora stayed a little bit longer in the cafeteria to finish her coffee.

She still couldn’t believe that they were working at practically one of the safest places in the country: the psychiatric hospital. Located in the suburbs of Beirut, this huge convent belonged to an order of nuns, the Sisters of the Cross. It was built in the nin
eteenth century and was
divided into two parts. One part housed a huge ward for the treatment of mental diseases and a permanent home for the mentally retarded. The remaining part contained living quarters for the sisters, who were mostly dedicated to service inside the hospital. They did everything from cleaning to nursing to creating work for the mentally ill who would stay there forever, rejected by their families.

The hospital was built atop a hill
surrounded by woods where it had
a view of the Mediterranean Sea. When the war started, the governmental hospital for psychiatric patients got completely destroyed, which meant that the Convent of the Cross was the only one left in the area. Its reputation as a great hospital even extended into the neighboring Arab countries, and the hospital started receiving patients who needed the privacy of their own apartments or suites.

Nora was happy to stay there. She had already taken a room, which she was sharing with Rheem. They took their meals with the other interns and residents at the convent. Their last experience was at St. Joseph Hospital, which had been completely destroyed by a huge explosion after the bombing of the oil reserve beside it. Nora had had a breakdown after that and was put on tranquilizers and anti-
anxiolytics
for a while. The Convent of the Cross, with all its psychotics, was a kind of small heaven compared to the outside world where war was raging.
They’d all been staying together
—
i
nterns and residents
—
in the same building, making a nice group. Her coffee finished, Nora went to check on the new patients.

He was the last one she had to check on. It was around midnight, and the hallways were dark and empty. Nora couldn’t wait to finish up and go to sleep. There weren’t any detailed notes in his file about his past admissions. ‘Addiction to alcohol,’ it said, and ‘one nervous breakdown three years ago.’ When she entered the room, he was just looking straight ahead—not asleep—but he showed no desire to acknowledge her.

“What are you doing here? It’s after midnight, and I’m supposedly asleep. Do you have to come and check on me every second?”

“Hey there, I’m the doctor here. I’m supposed to ask the questions,” Nora answered good-humoredly. She had started to get used to the psychiatric patients and their attitudes.

He looked at her, and she drowned in the deepest green eyes she had ever seen in her life. They were as troubled as the waves in a stormy sea, attracting and scaring her at the same time. He looked at her for the longest time, then just smiled. His smile was as attractive as his eyes. ‘Gorgeous,’ she thought.

“Well, tell me what’s happening. Why are you back again?”

“Maybe for the pleasure of meeting you.” He had a teasing, almost mocking expression on his face.

“Let’s be serious. Were you drinking again?”

“Just partying a little harder than usual. Is that a crime? But it looks like it, if you ask my mom or Dr. Azoomy. They consider themselves in charge of my destiny now.”

“They might be looking out
for your own good
; that’s what moms usually do,” said Nora, thinking about her own mother.

“Nice…So, Dr. Nora, will I see you again tomorrow?”

“You’ll have to see me every day for a while. I’m interning here, and you’ll be under my care.”

He stared at her
thoug
htfully
. “You know my name; it’s Tamer. I’m Muslim by the way. Do you feel like attacking or killing me now?”

Shocked by his directness, she just looked at him. The war had been going on for fourteen years now; people had gotten killed on both sides, and the destruction was widespread. His attitude angered her; she couldn’t stand people who mocked how they were all stuck in this sad reality.

“Who cares? To tell you the truth, I don’t feel anything. So what if you’re Muslim? I don’t care about any religion anymore…But how did you cross the line? I’m just curious about it.”

Love notes by Avis Exley
Her Scales Shine Like Music by Rajnar Vajra
The Coven by Cate Tiernan
Through the Whirlpool by K. Eastkott
The Missing by Chris Mooney
The Serpent of Stars by Jean Giono
The Bite Before Christmas by Jeaniene Frost, Lynsay Sands
The Tortoise and the Dare by Terry Deary
A Clue to the Exit: A Novel by Edward St. Aubyn
Seducing the Sexy Celebrity Chef by Giselle Renarde