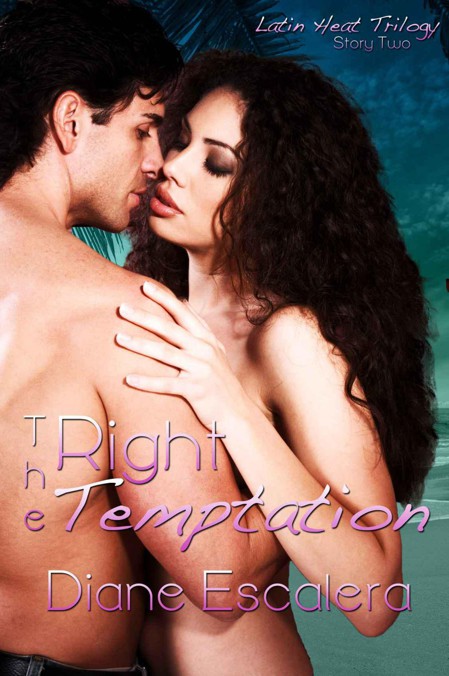 Can a childhood crush mature into the real thing?

Kayla Martinez has recently landed an RN position at a prestigious hospital in her hometown. The new job is everything she’s hoped for, especially when one hot specimen shows up in the ER. She hasn’t seen her childhood crush in years, and considering how much hotter he’s gotten over time, she almost ends up needing resuscitation.

The last thing Nico LaCosta needs is a broken arm. Now his pal’s kid sister wants to soothe his pain, but he’d rather keep his distance so her big brother doesn’t break his other arm. Kayla’s no child anymore, though. She’s one hot-blooded woman, determined to remind him of a mind-blowing kiss back when they were teenagers. Leave it to Kayla to drop by his house unannounced and play Nurse Seductive. A guy has to follow the buddy code, or face the consequences. Still, sometimes giving in to temptation is worth it…

Huskier voice. Same sexy laugh. Beautiful sculpted back when he turned away. She dragged in a long, ragged breath. “Cute place,” she said, in an effort to distract herself.

“Thanks. Got it on a short sale when the market crashed. It’s a work in progress.”

She casually inspected his home. An open floor plan gave the cozy house a spacious feel. “Your floors are gorgeous. Did you just get them done?” The hardwood had a lovely sheen.

He nodded. “How did you find me? Your brother told you where I live?”

Puhleez. Jesse would kill her if he knew the truth. Nico and her brother were childhood friends. Jesse had had one rule: sisters were off-limits. Granted, they weren’t kids anymore and she could date whomever she pleased. For now, what Jesse didn’t know wouldn’t hurt. “No. I got the address off your hospital records.” She smiled sheepishly.

Nico cocked a brow. He leaned his chiseled frame against a wall and slipped one hand into the front pocket of his relaxed jeans. “Isn’t my information confidential?”

Kayla shrugged. “Are you gonna report me?”

Holy smokes. Somebody get her an oxygen mask. STAT.

Thank you for purchasing this Lyrical Press book

To Mom, for always believing in me even when I had my own doubts.

To my awesome editor, Piper Denna–the best match for me! Thanks for making the tough job of storytelling seem easy.

She felt like a total stalker. Miracle no one had called the cops to report that some random chick kept doing drive-bys in their peaceful neighborhood. Then again, maybe no one had noticed. Kayla Martinez hoped for the latter. Casing Nico LaCosta’s house like a crack addict in need of a quick fix topped her list of most embarrassing moments. Getting arrested for said behavior would definitely screw up her plans.

Kayla hunched in the driver’s seat of her old, beat-up Nissan. She cut the engine, mumbled under her breath to please let it start again if she needed to make a quick escape. The parking spot offered an unobstructed view of Nico’s house. And his bare chest. The light in his kitchen–the one without blinds–illuminated like a guiding light that directed her eyes straight to his mouthwatering bod.

The older neighborhoods had colossal trees. Thick and bushy, they provided excellent coverage for a peeping Tom like Kayla. In her defense, this wasn’t a creepy habit. Okay, spying on Nico through his windows looked pretty bad. That much she’d admit. But she had a good reason!

Standing by the open fridge with one arm in a cast, Nico fumbled with a juice carton. He looked adamant. Determined. So freaking fine. Kayla licked the drool from her bottom lip
.
She watched intently as he lifted the carton to drink. Memories blasted her. His gorgeous mouth had left an imprint on her heart. So what, she’d been only thirteen. No guy had ever kissed her that way. He’d tainted her for all other men. They couldn’t measure up. Not then, not now. That’s why she’d come back.

Well, she’d also scored a great job at the local hospital. No surprise, all of her goals had been achieved. Almost all... Kayla the go-getter. She’d worked her butt off to become an RN. She’d networked herself right into her current position. So far, it lived up to the hype. The hospital had a prestigious reputation as one of the best in the state of Florida. Caring for patients in her hometown, the place where she grew up, had her bursting with pride.

Speaking of patients, one incredibly hot specimen had shown up in her emergency room a few weeks ago and oh God, she’d been the one who’d needed resuscitation! It had been in her plans, once she’d gotten settled, to go looking for Nico LaCosta–her future husband and father of her children. But he’d found her!

Thank God his injuries hadn’t been life-threatening. A broken arm, some stitches, and a few bruised ribs she could work with. Fortunately, or unfortunately, he’d only stayed at the hospital overnight for observation. She’d pulled a double shift just to keep the other nurses away, so she could carry out her duties and observe him properly.

Sadly, he hadn’t even recognized her. Then again, he’d been practically comatose, thanks to the pain meds. Kayla hadn’t changed much. Not physically at least. Yes, her body had gained some nice curves, if she did say so herself. For a while there, she’d wondered if boobs were in the cards. Now she sported a full deck. Nico’s body had also gone through a nice transformation. Gorgeous muscles carved his physique. Hard ones too. She’d felt them at the hospital when she’d helped him undress.

Help. She wanted to nurse those injuries, kiss his boo-boos and make them go away. Of course, Nico’s mother had assumed the caretaker position. She’d practically moved in. Kayla should know. She’d driven by his house every day for the past three weeks. When would she get him alone?

Tonight looked promising. For once, the sonic blue Mustang sat alone in his driveway. Kayla’s heart beat wildly. She’d waited long enough. Time to make her move and claim the gorgeous guy in the kitchen.

She went over the plan. Hesitated. Stalled. Hopefully his
madre
wouldn’t be returning any time soon. She pressed her hands down the front of her work scrubs. Want something? Go for it! Kayla Determination Martinez pulled up right behind the Mustang.

Don’t think. Just do.
She unhooked her seatbelt, climbed out of the Nissan and followed the cobbled path to the front door. The light in the kitchen had just gone out. Kayla glanced at the premises. His home looked quaint, with lots of palm trees and lush landscaping. But really, now wasn’t the time for decorating notes.

Amazingly, her hand didn’t shake when she pressed the doorbell. She looked down at her uniform. Dang it, she should’ve changed. Oh, well. She had a duffel bag in the car with extra clothes. If everything went according to plan, she could get all pretty for him later. Her head snapped up when the door unlocked and squeaked open. There stood Nico, still shirtless, with a serious scowl on his face. Their eyes locked and held.

He looked her up and down, his sexy dark eyes narrowing as they searched her face. “Kayla?” he rasped out.

Woohoo! This time he recognized her. She couldn't contain her smile. “Nice of you to remember,” she said, trying to sound nonchalant. “How are you?”

His gaze raked over her again. “I’ve had better days.” He showed her his cast.

Trying not to stare at the macho tattoo inked into his sculpted shoulder and thick upper arm, she swallowed hard. “I see you got your stitches out.” She studied the scar above his brow. “It’s healing well.”

“Huh?” His finger traced the wound. “How’d you know I had stitches?” With a perplexed look, he took in her attire. “You work at a doctor’s office or something?”

She watched his sensuous lips. Bet his kisses were still lethal. “You don’t remember me taking care of you?” She used a hurtful tone.

“Taking care of me?” He looked baffled, confused.

Lord, he had the cutest expressions. She’d forgotten how adorable he could be without even trying. “At the hospital.”

He stepped outside. “That was you?” Nico looked at her as if she’d come from another planet.

Nico watched her in silence. “Sorry. I was in such a daze. Only thing I remember is pain,” he finally said.

He didn’t exaggerate. Poor baby had been in sheer agony before the drugs had kicked in. “How are your ribs? They take the longest to heal.”

Nico touched his side and winced. “I thought you lived in Gainesville.” Curiosity lined his forehead.

Her gaze slid to his torso. His ribs were still tender. “I did while I was in nursing school.”

He flashed a genuine smile. “So now you’re a nurse.”

“Yep.” Kayla didn’t like to boast, but her family never shied away from it. Extremely proud, they’d brag to anyone who’d listen.

“And you make house calls?” he asked, crowding her personal space.

She backed up and nearly collided with a potted Areca palm. “You’re the first.”

A laugh rumbled out of him. “Come on in. I want to hear about your life.”

Huskier voice. Same sexy laugh. Beautiful sculpted back when he turned away. She dragged in a long, ragged breath. “Cute place,” she said, in an effort to distract herself.

“Thanks. Got it on a short sale when the market crashed. It’s a work in progress.”

She casually inspected his home. An open floor plan gave the cozy house a spacious feel. “Your floors are gorgeous. Did you just get them done?” The oak hardwood had a lovely sheen.

He nodded. “How did you find me? Your brother told you where I live?”

Puhleez. Jesse would kill her if he knew the truth. Nico and her brother were childhood friends. Jesse had had one rule: sisters were off-limits. Granted, they weren’t kids anymore and she could date whomever she pleased. For now, what Jesse didn’t know wouldn’t hurt. “No. I got the address off your hospital records.” She smiled sheepishly.

Nico cocked a brow. He leaned his chiseled frame against a wall and slipped one hand into the front pocket of his relaxed jeans. “Isn’t my information confidential?”

She shrugged. “Are you gonna report me?”

“I might.” He watched her with laser-focused intensity. “How’s Jesse? I haven’t seen him lately.”

Holy smokes. Somebody get her an oxygen mask. STAT. “His girlfriend moved in. That’s probably why.” Kayla strolled about the living room. He didn’t have a lot of furnishings, but the leather sofa and stone coffee table looked masculine, expensive. “Do you live alone?”

The Doctor's Redemption by Susan Carlisle
The Avenger 19 - Pictures of Death by Kenneth Robeson
Dragon Frost by S. J. Wist
The Gunpowder Plot by Ann Turnbull
Lover's Kiss by Dawn Michelle
A House Without Mirrors by Marten Sanden
The Disappearing by Jennifer Torres
Vixen by Jessica Sims
Dare To Love Series: Dare Me Again (Kindle Worlds Novella) by Cora Seton
Here to Stay by Debra Webb