Read The Rite: The Making of a Modern Exorcist Online

The Rite: The Making of a Modern Exorcist 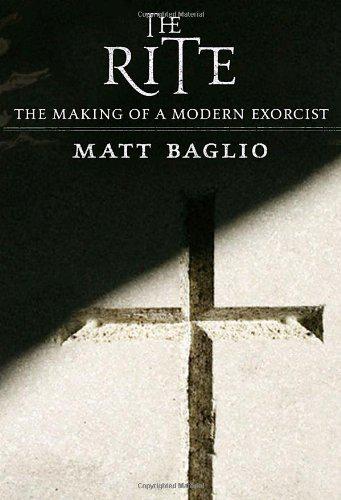 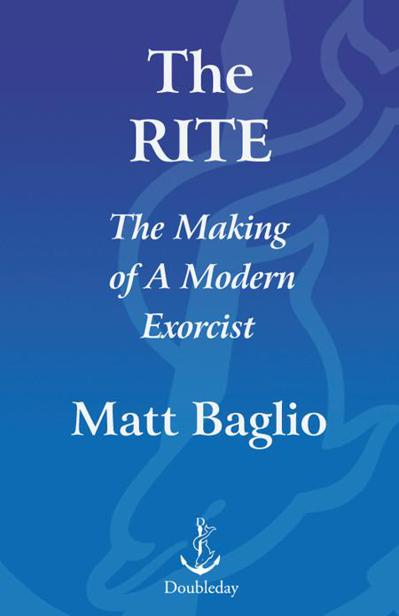 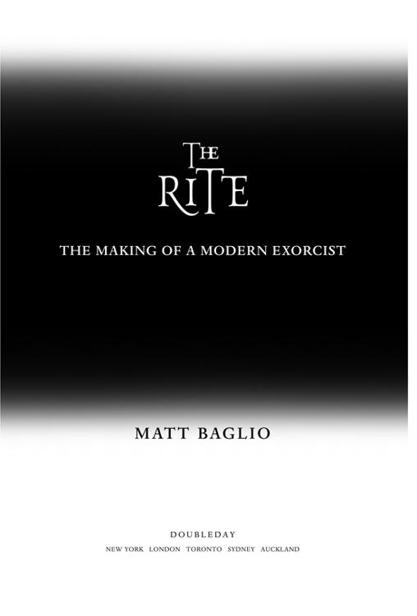 CHAPTER THREE
|
Going Back to School

CHAPTER SIX
|
In My Name

CHAPTER SEVEN
|
Searching for an Exorcist

CHAPTER TWELVE
|
Suffering of the Soul

CHAPTER FOURTEEN
|
Windows to the Soul 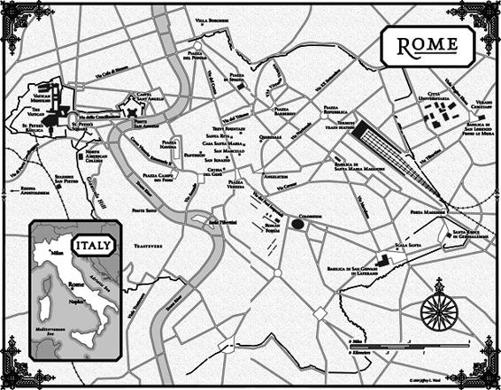 Among her sacramentals, the Catholic Church, in obedience to the Lord's Prayer, already in ancient times mercifully provided that through pious prayers her people may ask God to liberate the faithful from all dangers and especially from the snares of the Devil. In a truly unique way, exorcists were established in the Church who, in imitation of Christ, could cure those obsessed by the Evil One, even by commanding demons in the name of God, so that they might depart, lest for whatever reason they do further harm to human creatures.

—
Decree from the Congregation for Divine Worship of the Faith, November 22, 1998

T
he thirty-five-year-old woman lay on a padded folding massage table, her arms and legs held by two men. She wore a black Puma sweat suit and her dark brown hair was pulled back tightly into a ponytail. While not heavy she was a little on the stocky side; and as she grunted and struggled, the men fought to hold on. Nearby, another man and woman hovered, ready to intervene. The exorcist stood a few feet away, a small crucifix in one hand and a silver canister filled with holy water in the other. Surveying the scene, he had a decision to make. The exorcism had been going on for the better part of an hour, and the strain was beginning to show on everyone. Should he continue?

Suddenly the woman's head turned, her eyes fixating on a spot near the far wall. “No!” the demon said in a deep guttural voice coming from deep within her, “the one in black is here, the jinx!”

The exorcist felt a momentary ray of hope, knowing from past exorcisms that this was the demon's code to describe Saint Gemma Galgani.

“And the little white one from Albania!” the demon roared.

The demon let fly a string of blasphemies in a rage, then his voice took on a mocking childlike tone. “Oh, look at them! Look at them! They are hugging and greeting each other!” Then, back to a deep guttural rasp, “Disgusting! Disgusting!”

To the woman lying on the table, the two figures appeared as if in a dream. Saint Gemma was dressed in her traditional black, and looked very much as she had in her twenties. Oddly, Mother Teresa also looked very young—perhaps only twenty-five.

The exorcist glanced over his shoulder to where the woman was staring and saw nothing but the blank wall. “Let us thank Saint Gemma Galgani and Mother Teresa for being here with us today,” he said.

Unsure of who had just arrived, the exorcist added, “I say thank you that he is here.”

Then suddenly the woman sat bolt upright, her arms extended in front of her as if she'd been yanked up by some unseen force. “Leave me alone!” the demon screamed, even as the woman flailed to break free from the invisible grasp. The two men went to pull her back down, but the exorcist motioned for them to stop. “Let's see who just came. In the name of Jesus and the Immaculate Virgin, who is this person?”

The exorcist smiled inwardly, recognizing the Latin motto. “Thank you, Holy Father John Paul II, for coming to help our sister,” he said.

Again, in her dreamlike state, the woman watched Pope John Paul II, who seemed no older than thirty and was dressed all in white, bless her forehead three times.

Wanting to take advantage of the apparent reinforcements, the exorcist pressed on. “Repeat after me: Eternal Father, you are my Creator and I adore you,” he said to the demon.

“Up yours!” the voice responded.

“Eternal Father, you are my Creator and I adore you,” the exorcist insisted.

“A
bomb is going to explode if I say it!” the demon shouted.

All at once, the woman felt awash in an incredible feeling of love as the veiled figure of Mary appeared before her, wrapped in a gold-and-white veil that covered half her face. Watching in amazement as the figure approached, the woman was even more surprised to see that Mary was gazing at her tearfully.

As the exorcist watched, the demon once again went into a fit.

“No, no, no, don't cry!” he screamed, and the woman's body practically convulsed.

Then for an instant the woman snapped out of the trance, saying, “A tear from Mary is all it took,” before falling back into the state.

The exorcist was elated to know that Mary was present and helping. He instantly launched into a Hail Mary Everyone in the room joined in, even the woman on the table. Yet somehow the exorcist knew it wasn't over.
The demon must be hiding to allow her to recite the prayer
, he thought. “Say after me: Eternal Father, you are my Creator and I adore you,” he said to the demon.

The woman thrashed and screamed. “No!” the demon barked. “I'm not going to say it! I must not say it, I can't; it is against everything.”

The exorcist could feel that the demon was weakening. He asked everyone in the room to kneel. “Eternal Father, you are my Creator and I adore you,” he intoned, while everyone repeated him.

The woman, sensing the torment of the demon, saw all the saints in the room respond as well.

“No, no, even those other ones kneeled down—the white one, the black one, and the little white one,” the demon said. Then the exorcist noticed that the demon's voice changed slightly to a tone of forced reverence when he added, “Her, her [Mary]—she kneeled down as well.”

This must be it
, the exorcist thought. The demon is going to break. “In the name of Jesus Christ, I order you to repeat the phrase.”

Ecstatic, but realizing it was still not over yet, the exorcist made the demon repeat the phrase two more times. When the demon had finished, the exorcist said a phrase used at the conclusion of the Eucharis-tic Prayer: “Through him, with him, in him, in the unity of the Holy Spirit, all glory and honor is yours, Almighty Father, forever and ever.”

“This humiliation was given for the glory of God, not because you commanded it but because God commanded it. You are damned,” the demon said, addressing the exorcist.

The exorcist did not falter.
“Che Dio sia benedetto,”
he continued, God be praised.

W
HEN PEOPLE HEAR THE WORD
exorcism
, many think of images made popular by Hollywood films—girls writhing in torment, their bodies contorting in impossible ways as they launch a continuous stream of pea-soup-green projectile vomit. In truth, such theatrics, as well as those in the woman's exorcism that took place in January 2007, in Rome, Italy, are quite rare. Instead, exorcisms can be rather mundane, almost like going to the dentist—complete with a stint in the waiting room and a card to remind the recipient of his or her next appointment. The reality is that few people realize what goes on during an exorcism, and that is true for Catholic priests as well— many of whom would just as soon forget that exorcism exists at all.

The word
exorcism
itself is an ecclesiastical term that comes from the Greek
exorkizo
, meaning “to bind with an oath,” or to demand insistently. During an exorcism, a demon is commanded in the name of God to stop his activity within a particular person or place. As understood by the Catholic Church, an exorcism is an official rite carried out by a priest who has been authorized to do so by his bishop. In ancient times, exorcism was an important way for early Christians to win converts and prove the veracity of the faith. The power itself comes from Jesus, who performed numerous exorcisms as detailed in the New Testament, later instructing his disciples to do the same.

In light of the tremendous advances in modern medicine—including a more sophisticated understanding of neurological and psychological illnesses, the advent of psychoanalysis, and similar advantages—the rite of exorcism has become an embarrassment to many within the Church, who see it as a superstitious relic from the days when illnesses like epilepsy and schizophrenia were considered “devils” to be cast out.

Much of this misunderstanding comes from the nature of exorcism itself, as well as from the Devil's attributes that have more foundation in folklore than theology. A beast with horns and half a goat's body ravaging innocent virgins in the dead of night? Soul-leaching, shape-shifting she-demons on the prowl for their next victim? Without courses on demonology to educate seminarians, it's no wonder priests have turned away in droves from this exorcism stuff.

At the core of the issue lies the problem of evil. Is it a physical reality, a fallen angel called Satan (as the
Catechism of the Catholic Church
, a small but dense book of about 900 pages says), or is it a lack of good in something, an inability to live up to the designs of the benevolent Creator?

Many priests, not wanting to turn their backs on the rich history associated with their faith, while at the same time wanting to embrace the modern view of reality in which the Devil is seen as a metaphor, would like to have it both ways. Others believe in the traditional teachings, but prefer not to talk about it. On the extreme end, some priests just flat out deny the Devil's existence.

Ironically, while many priests and bishops seem bent on skepticism, the general public has become enamored with the occult, gravitating to new religions such as Wicca. According to an American Religious Identity Survey, Wicca grew in America from 8,000 members in 1990 to over 134,000 in 2001. (By 2006, that number was said to have risen to more than 800,000.) Sales of occult and New Age books have also skyrocketed, as has the number of people who believe in angels and demons (according to a 2004 Gallup poll, about 70 percent of Americans said they believe in the Devil). All this coincides with an explosion in the numbers of people who say they are afflicted by evil spirits. According to the Association of Italian Catholic Psychiatrists and Psychologists, in Italy alone, more than 500,000 people see an exorcist annually.