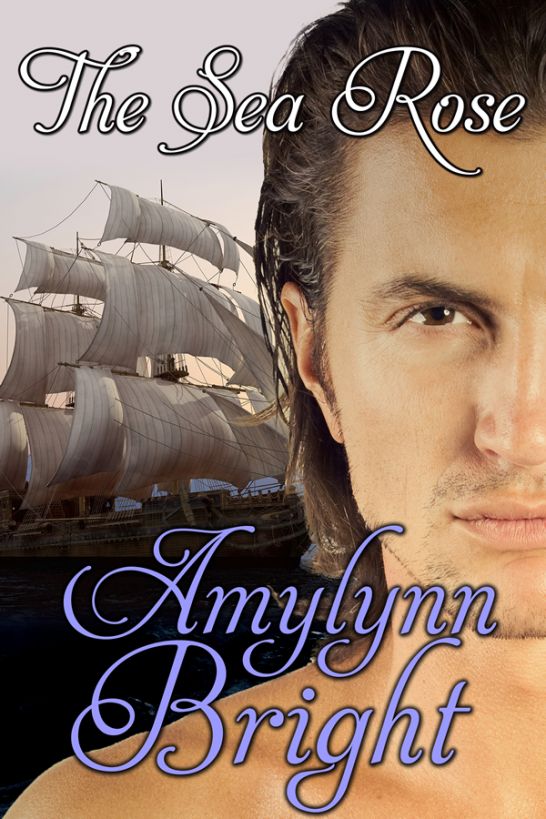 No part of this book may be
reproduced in any form or by any electronic or mechanical means
including information storage and retrieval systems, without
permission in writing from the author. The only exception is by a
reviewer, who may quote short excerpts in a
review.

This book is a work of
fiction. Names, characters, places, and incidents either are
products of the author’s imagination or are used fictitiously. Any
resemblance to actual persons, living or dead, events, or locales
is entirely coincidental.

Publishsed by Amylynn Bright
at Smashwords

For Pop ~Who taught me how to tell
stories and is possibly the best story teller I’ve ever known even
if I know that ninety percent of ‘em are complete BS. I love
you.

And oddly, Tommy Lee Jones who played
one of my favorite movie pirates.

Another huge wave crashed into the
ship sending Roselyn careening to the other side of the cramped
cabin. The captain had ordered the lamps extinguished the minute
the waves became robust and the rain began to pound against the
windows in earnest. Now in the pitch black night, everything that
hadn’t been bolted or tied down was flying around the room.
Including Roselyn.

The prow of the ship dove into the
trough of another wave. Her trunk slid across the planks of the
floor and slammed into her back, knocking the wind from her lungs.
The lady’s maid who’d accompanied her on this voyage had
disappeared to her own quarters early in the storm, wanting to be
sick in private. Before the storm became truly ferocious, the
captain of the British merchant vessel had come to her cabin
several times to inquire into her welfare. Though she hadn’t seen
him in several hours now, she could just faintly make him out along
with the rest of the crew shouting orders to each other over the
roar of the wind and sea.

Roselyn struggled to her
feet, working desperately to gain the bed before another wave hit.
If she could manage to stay on top of the bunk she might not be so
pummeled by the objects careening around on the floor. She clutched
at her stomach and moaned.
If everything
would just hold still for a minute….

She reached the mattress, but was
thrown off by a violent upheaval to starboard and bashed her head
against the far bulkhead. This time the ship didn’t immediately
right itself, and she remained dazed in a heap lying half on the
wall. She reached up and felt her fingers become slick with the
blood oozing from her tender temple and cheek. Roselyn pressed her
hand against the wound and winced.

The cabin door burst open. Roselyn was
confused when the door seemed to open from the floor. From his
strange angle, the captain whipped his head around in the darkness,
searching for her. Roselyn didn’t know what to make of her
topsy-turvy world.

“
Miss Weldon!” the captain
hollered into the room. “Roselyn, are you in here?”

“
Umph,” she grunted. “I’m
over here.” She attempted to right herself but the canting of the
room and the gash on her head made her woozy.

“
You need to get up and
come with me right away.” The captain scrambled across the slanted
room and grabbed her by the arm. Rough fingers dug into her flesh
when he yanked her off the floor.

“
Ow!” she complained as he
dragged her towards the door. “What’s happened? Is the ship on its
side?”

The two of them made it out the
doorway and into the hallway leading to the deck. She realized with
dawning horror they were slogging through water midway up her
calves.

“
Is the ship sinking?” She
tried to control the terror that was taking root. Up to this point,
she’d done a fairly good job of it. Even while being thrown around
the cabin with the wind howling, she had managed to keep some
semblance of calm.

The captain didn’t answer
her; whether he didn’t hear her or was too concerned with steering
her out onto the deck, she didn’t know. The sailors staggered on
the heaving deck, lowering
skiffs and
rowboats, their faces taut with fear and terrified determination.
She was accustomed to organized activity on deck where the
well-worn sailors moved with confidence, but this night they
scrambled about verging on chaos. Their show of fear only served to
panic her more.

She pulled on the captain’s arm until
he turned around. “The ship is sinking isn’t it!” she screamed over
the wind. “Oh dear God, we’re sinking.”

Roselyn was in full blown hysteria
now. The blood coursing down her face and neck, which had caused
such dismay before, was nearly forgotten and replaced by a
premonition of the mighty British ship sinking and her body afloat
and lifeless, tossed endlessly by the relentless waves.

“
I can’t swim, Captain. Oh
dear God, I can’t swim.” Her voice was a reedy scream as she clawed
against his hand to free her arm from his powerful grasp. She was
desperate to get away from him and return to the imagined safety of
the cabin. Even an upside down cabin was better than a rowboat to
her hysterical mind.

“
Get in the boat. If you
get into the boat you won’t have to swim.”

“
No,” she shrieked. “That
boat’s too small.” She dug in her heels and sunk into a squat to
make it harder for the captain to drag her towards what she knew in
her heart was certain death.

In an obvious demonstration of his
fear and desire to get her across the deck and into a lifeboat, he
slapped her–hard–across the face.

Roselyn inhaled sharply but stopped
struggling. With wide eyed horror, she allowed the man to lead her
to the boat. In a desperate attempt to take control of the chaos,
he thrust her towards the boat and hurried off in the opposite
direction.

“
Come on, miss.” A
grizzled old tar took her by the hand and wiped at the blood on her
face with a rag. He spoke with a heavy accent making it difficult
to understand him as he yelled over the wind. “The skiff is da best
place for ya, if dis ole bitch goes down, we’ll be wantin’ ya safe
and ou ‘o the drink.” With surprising gentlemanly solicitousness,
he handed her into the boat. Roselyn clutched at the man’s hands
not wanting to let go. She looked around frantically at the men
running past and tried to locate her maid, but she was nowhere to
be found. The wind whipped her black hair around her face gluing
the long strands to her cheeks and forehead with the blood and
making it nearly impossible to see anything.

A deafening crack followed by several
loud crashes and the huge ship groaned under the weight as more
water dumped on deck. Roselyn was doused from head to toe with
frigid, salty water. Her scream wasn’t heard over the roar of the
sea and the creaking of the wood as the ship came apart. The deck
listed severely and, to her horror, several men lost their grip on
the rails and fell into the ferocious sea. She grasped at her
ancient sailor, terrified that he might also fall into the churning
water and abandon her to a dreadful fate.

Roselyn could only wonder in mounting
panic where her missing maid could be. It was clear to her now that
this mighty merchant ship was sinking and her only hope was to stay
in the tiny row boat and pray.

Time was running out. Another big wave
or two and the crumbling ship would go under the sea and never
re-emerge. The old sailor cut the lines holding the smaller boat to
the deck. The skiff slid and the enormous wave he’d prophesied came
and lifted the skiff into the water, turning the enormous ship
fully on its side.

For one chilling moment, Roselyn
thought for sure the old sailor would be lost, but she grasped
whole handfuls of his shirt and hauled him on board just before the
small vessel crashed broadside into the roiling ocean. Their tiny
craft was drawn away from the sinking ship almost immediately and
it tossed about in the water. Each time the skiff crested the top
of a wave, they looked around wildly for a sign of the sinking ship
or other survivors, but they saw no one. Eventually, even the
remains of the ship were lost to them.

Roselyn sat on the bench at the stern
of the row boat and peered out into the moonless night for signs of
other survivors. She screamed out names into the horrific darkness
until her voice gave out, her throat too sore to keep up the vigil.
The sailor operated the oars and steered into the waves, doing his
best to keep them upright.

She realized she didn’t even know his
name. Hours later, while the sun rose on the calm sea, Roselyn lay
curled up in the back of the boat. Her dress was heavy with water
and ruined by salt. Her hair lay stringy and loose down her back.
The sea washed the blood from her face and hair. Salt stung the
cuts and abrasions until she was simply too numb to feel it. Her
sailor lay slumped over on his side, seeming as weary and shocked
from the ordeal as she was. When the sun rose, a giant fiery ball
emerging from the watery horizon, Roselyn acknowledged to herself
that it was the most beautiful sunrise she’d ever seen.

Granted, she was adrift in a tiny boat
in the great Atlantic Ocean with a nameless stranger who saved her
life, but still, she was alive.

That thought brought a faint smile to
her lips as she finally fell into exhausted sleep.

The man stretched out on the quarter
deck naked from the waist up, his fingers laced together behind his
head. His raven black hair curled over his forehead and fluttered
in the breeze while he lay there, eyes closed, taking in the sun.
The crew milled about the deck. They’d completed all of the work
which needed to be done to bring the ship to rights after the
horrendous storm that blew the previous night. It was tradition on
the ship to allow for a day of rest and celebration after surviving
a storm of such magnitude.

The relaxed man kept his eyes closed
and willed the voice to go away. It wasn’t often that he allowed
himself the opportunity to do absolutely nothing. A ship this size,
with a crew of one hundred and fifty men, kept a sea captain
busy.

He stretched his long legs, flexed his
naked toes and re-crossed his ankles. “Yes, Mr. Blake?” He did not
sit up. He didn’t even sound especially interested.

The Horror Squad (Book 3) by Weeks, TJ
Stir-Fry by Emma Donoghue
Vilmo's Wrath: Deglon Blood by Lachesha W.B.
Everything I Need by Natalie Barnes
Merry Jones - Elle Harrison 01 - The Trouble With Charlie by Merry Jones
The Tapestries by Kien Nguyen
The Oracle of Stamboul by Michael David Lukas
When We Were Sisters by Emilie Richards
Shades of Doon by Carey Corp
Burning Intensity by Elizabeth Lapthorne